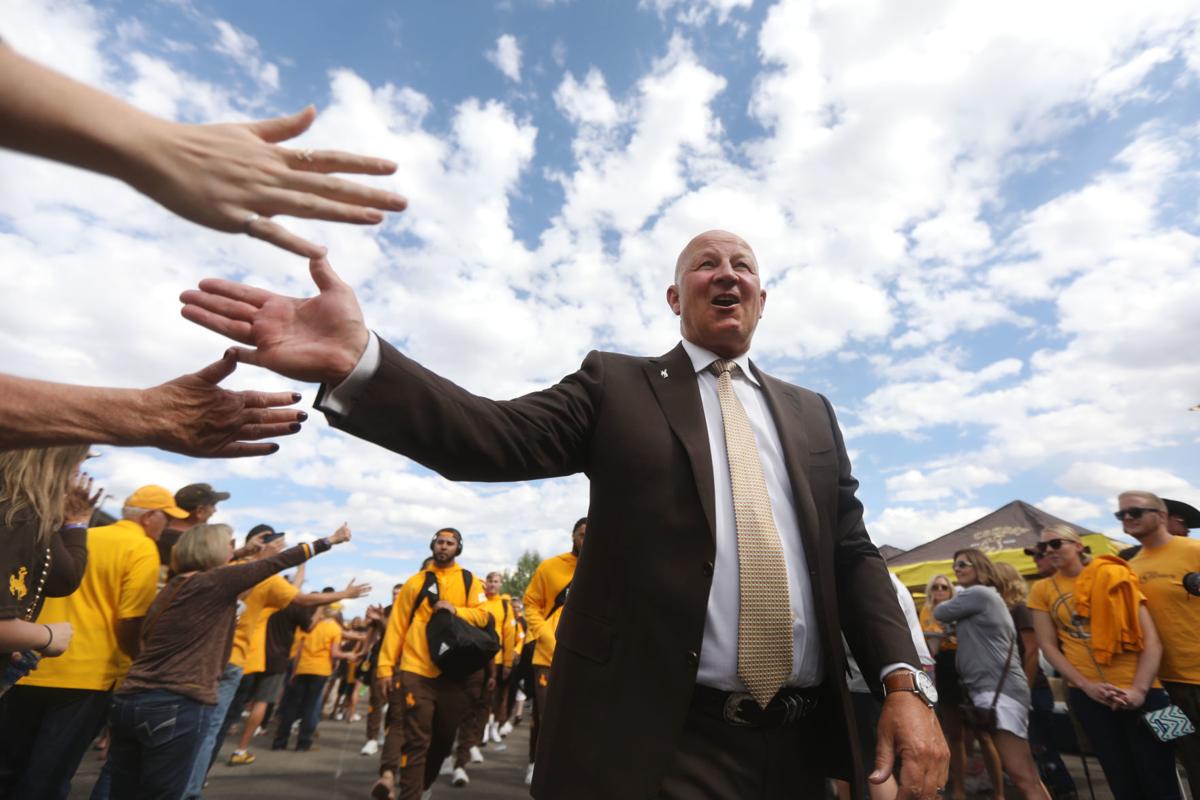 University of Wyoming head coach Craig Bohl leads the football team through a line of fans into War Memorial Stadium before the Cowboys' game against Missouri on Aug. 31, 2019, in Laramie, Wyo. 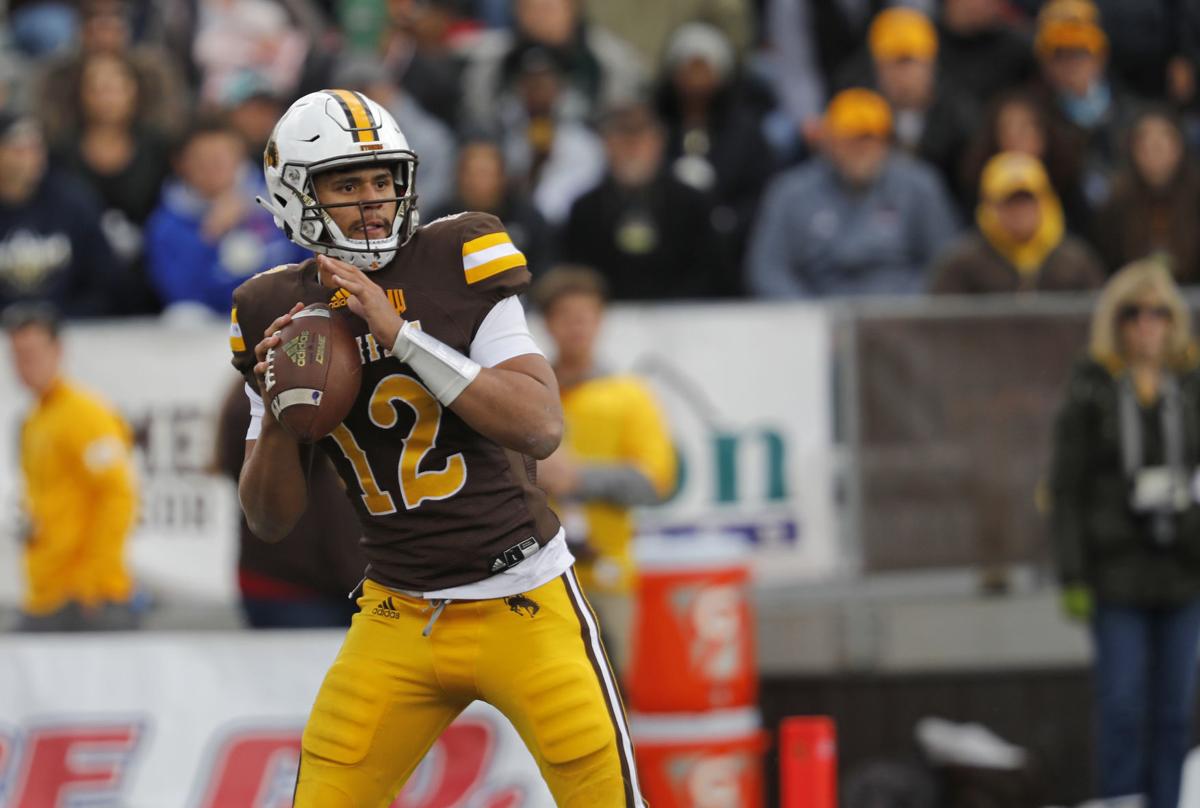 LARAMIE, Wyo. — Craig Bohl is spending more time than most coaches these days dabbling in technology.

Not only does Wyoming’s coach have his own assistants and players to keep tabs on, but he’s also a member of the NCAA’s Division I Football Competition Committee and serves on the American Football Coaches Association Board of Trustees. With the upcoming college football season in limbo amid the coronavirus pandemic, that means frequent Zoom meetings with commissioners, athletic directors and coaches nationwide are part of Bohl’s weekly routine.

That doesn’t count all the times he has picked up the phone to call some of his coaching peers around the Mountain West.

“A lot of communication,” Bold said. “We’re throwing out a lot of different ideas, and there’s a lot of probing. A lot of people asking what everybody else is doing. Everybody wants to bring back football in a safe manner, and there’s just different perspectives from different parts of the country. A lot of really good dialogue. Not a ton of hard and fast decisions, though.”

Bohl said he normally hops on a conference call with the MW once a week, which is usually spearheaded by the league’s commissioner, Craig Thompson. The same goes for calls with the competition committee, which also includes Florida athletic director Scott Stricklin and Stanford coach David Shaw. The AFCA board holds a conference call every other week, Bohl said.

Regardless of which call he’s on, much of the conversation remains focused on contingency plans for the season, though a recent ruling by the NCAA has inspired more confidence that teams will be able to get in a full 12-game schedule this fall.

Some athletes are in the process of reporting to campus to begin those workouts next month. Wyoming was the first school to publicly announce it would start phasing its athletes back on campus following the NCAA’s vote, though athletes that choose to return to UW’s campus will be required to quarantine for 14 days before starting workouts.

But how soon athletes around the country are actually able to return to their respective campuses is up to each school and conference, meaning not every program’s athletes are going to resume workouts at the same time. The Southeastern Conference isn’t allowing its football players to continue voluntary workouts until June 8 — a week later than Wyoming. The Big 12 has announced it will start allowing voluntary workouts on June 15, though one of its most prominent football members, Oklahoma, has decided to wait until July 1 to begin.

It’s also anyone’s guess as to when teams will actually be allowed to start organized practices. Bohl said three different models (four weeks, six weeks and eight weeks) have been discussed as to how long teams will need to adequately prepare for the season, adding four weeks has been established as the minimum.

That uncertainty has made ongoing discussions about contingency plans necessary should teams not be able to start their seasons in late August or early September as scheduled. Those talks have included playing a shortened season that eliminates nonconference games and moving the season to the spring, but Bohl said an effort to keep the schedule as normal as possible is the top priority among commissioners, coaches and athletic directors he’s joined on calls.

“Some of it comes down to the region of the country, but I believe the needle is moving to opening up the season when you can if the opponents you are playing are in that position as opposed to saying, ‘OK, let’s just not have a nonconference and play conference games,’” Bohl said. “That was bantered around. I don’t think that’s getting much traction right now. I’m confident in saying there’s a strong appetite to starting the season on time if everybody’s ready.”

If teams that are scheduled to play each other early in the season can’t start their schedules at the same time, Bohl said allowing Football Bowl Subdivision teams to replace that opponent with a Football Championship Subdivision opponent and then counting the result toward bowl eligibility — even if it’s the second FCS opponent on a team’s slate — is an alternative that’s being discussed “extensively.” Currently, FBS teams can only count one FCS game toward their win total for bowl eligibility.

Such a move would have to be approved by the Division I Football Oversight Committee. Bohl said the competition committee is scheduled to have another call Thursday.

“I think everybody wants to know that if we have to make some adjustments this year to play 12 games, let’s do what we can,” Bohl said. “We may not be able to do that, but try to provide as much flexibility as we can to do that.”

Of course, unless campuses are reopened, there may not be any games played. UW has extended online course delivery through the summer but has yet to announce its plan for course instruction this fall, though the university plans to request federal stimulus money in anticipation of reopening.

What if some MW schools opened their campuses but others didn’t? Would the teams at the fully operational universities still play the upcoming season? Bohl said there was “significant talk” about the topic once the California State University system, which includes MW members San Diego State, Fresno State and San Jose State, announced earlier this month that classes at its 23 campuses would be held online only this fall.

Thompson, along with school presidents Joseph Castro (FSU), Mary Papazian (SJSU) and Adela de la Torre (SDSU) issued a joint statement in response to that announcement, saying “more determinations are necessary” within the framework of academics and public safety and that “no decisions on athletics have been made.” Bohl acknowledged a decision about playing a season without all of the league’s members would be made by university presidents.

What Bohl does know is the possibility of getting any extra organized practice time at this point is essentially a “non-starter,” he said. UW was one of many schools forced to cancel spring drills before getting a single practice in, and Bohl told the Star-Tribune then that getting some of those practices back in the form of organized team activities this summer was an idea that was gaining traction among MW coaches.

Bohl said summer OTAs are an idea that’s still being discussed periodically, but with college football already dealing with a condensed schedule, he isn’t holding his breath.

“We’re certainly not counting on that, but if that’s there, we’ll take advantage of those opportunities to do some OTA work,” Bohl said.

At this point, Bohl is just hoping the Cowboys are able to go through a full preseason camp in anticipation of playing FCS member Weber State in their Sept. 5 opener as scheduled.

This will be the first head boys basketball coaching position for Cameron McCormick in his nine-year career.

Lockwood High School expects to be playing varsity schedules in team sports like football and basketball beginning with the 2021-22 school year.

Hillside letters, symbols of town and school pride, are stamped on the Montana landscape

If you've ever traveled by road across Montana, you've likely seen several gigantic letters on the sides of hills, mountains and cliffs. Here's the story behind those mammoth monograms.

Bill Speltz: Transferring has tilted Class AA playing field, but change may be on the horizon

For many Missoula Class AA sports enthusiasts, open enrollment is a boil that festers. Transferring of established high school athletes needs to be curbed.

The 35th Big Sky State Games will proceed this summer, with changes made to mask requirements and some indoor events becoming outdoor events.

Fans will need to wear masks, as will indoor athletes. Social distancing measures are also in place to combat the coronavirus.

World of Outlaws race at Big Sky Speedway is canceled

FARGO, N.D. — The World of Outlaws stop at Big Sky Speedway has been canceled, SLS Promotions announced in a press release on Wednesday.

Taylor Mims was a three-time all-Pac-12 selection during her career with the Cougars.

University of Wyoming head coach Craig Bohl leads the football team through a line of fans into War Memorial Stadium before the Cowboys' game against Missouri on Aug. 31, 2019, in Laramie, Wyo.