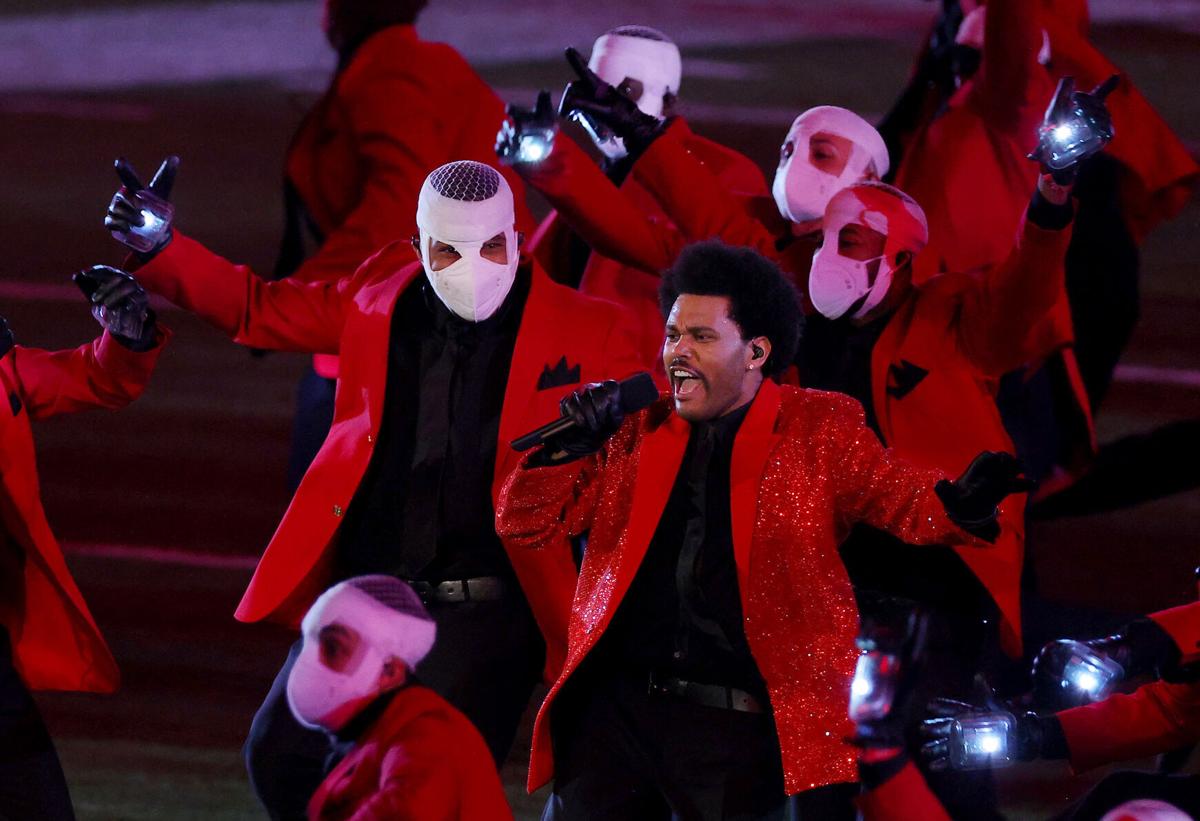 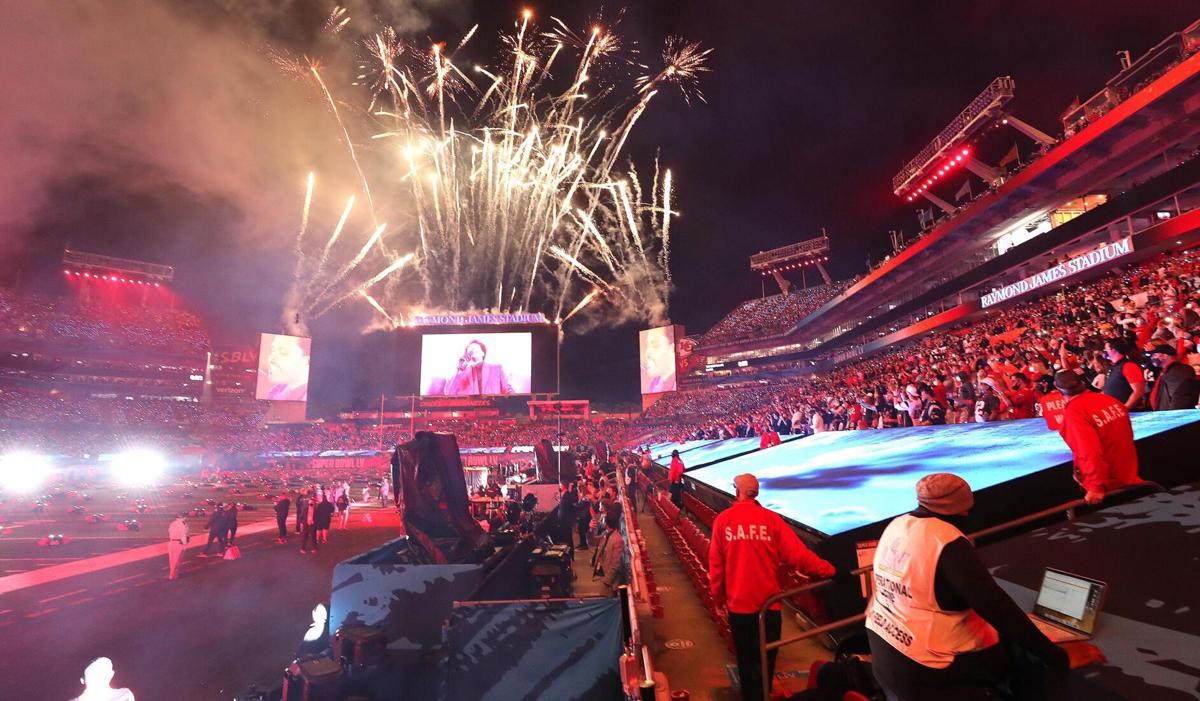 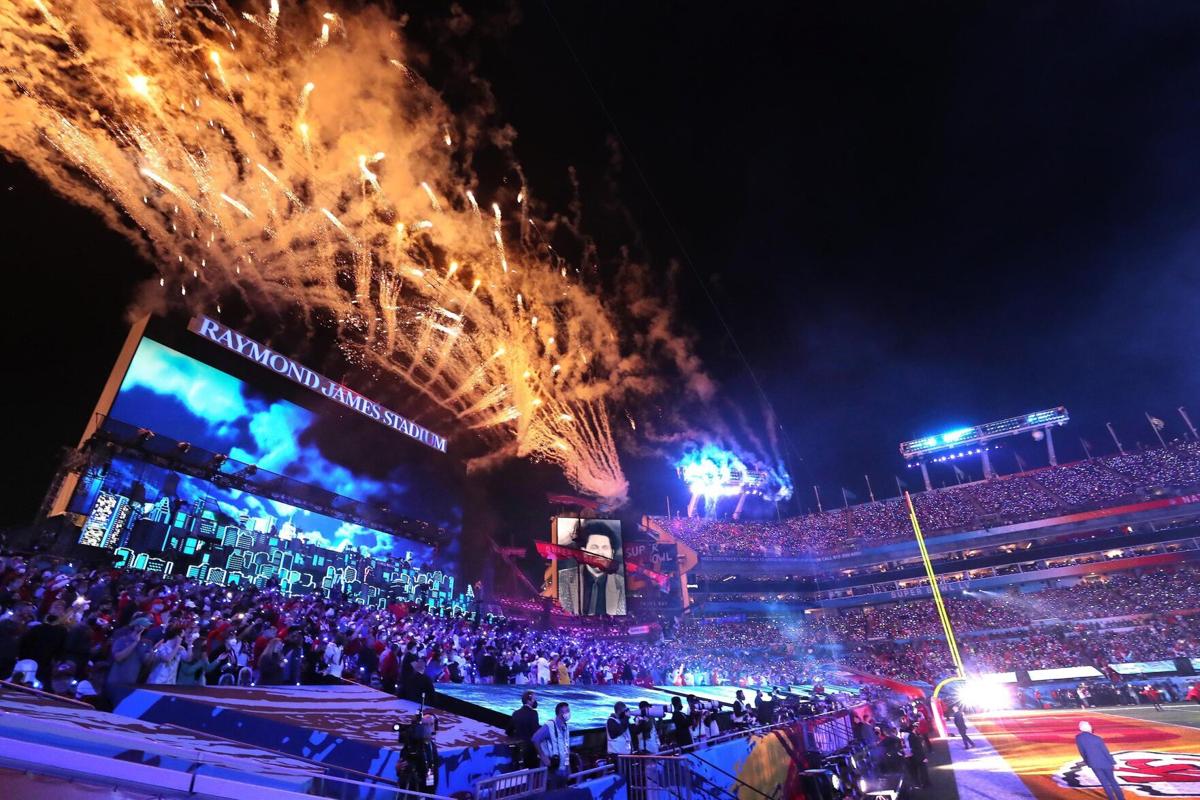 Would it be a classy affair, with shrimp cocktail and cigars? The Weeknd’s promotional materials for the Pepsi Super Bowl Halftime Show in Tampa seemed to suggest indulgence, suits and leather driving gloves and Champagne on ice.

Or would the show address the moment we’re in, the crushing year we’ve lived through? Would he play from the rafters with the cardboard people instead of center stage on the field?

The Weeknd, a.k.a. Canadian pop star Abel Tesfaye, found a way to do it all in a show that straddled the line of excess and commentary. He moved around Raymond James Stadium, hovering above the stands, the pirate ship in haunting silhouette.

The battle between good and evil was on from the start, when an angelic, red-eyed figure descended into a chorus of white-robed lookalikes. The Weeknd, in a sparkling red blazer, opened with his party hit Starboy, then headed into the first notes of The Hills, one of the best intros of a song, ever.

Then, where were we? We didn’t know, and that was the point. He wove through a maze of lights and sang into a dizzying fisheye lens, transfixing and disorienting, like the Weeknd himself.

The arc of the Weeknd’s art bends toward hedonism, skewering our baser instincts and obsession with pleasure. In recent music videos and on red carpets, he’s played a desperate character who emerges from a spiral with botched plastic surgery. It’s a wink to the virus of vanity, and many wondered if he would show up in bandages for this performance. He delegated that duty to his proxies, dancing with wrapped heads, aptly, for I Can’t Feel My Face.

He injected air with I Feel It Coming and Save Your Tears, arranging Earned It with choral singers and ascendant violins. But the darkness, as it does, returned. The bandaged dancers assembled on the field in an staccato, apocalyptic party that led into Blinding Lights, the megahit that’s spent dozens of weeks in the Billboard Top 10.

It’s a tricky moment to entertain. How do you drink from the chalice of show business when so many people are hurting? The Weeknd bunked in a lavish Davis Islands mansion, and also fed local healthcare workers local soul food. He spent $7 million of his own money to execute his halftime vision, produced by Jay-Z’s Roc Nation and live-event producer Jesse Collins.

There is no real clean getaway when it comes to navigating these times, the push and pull of following our desires and doing what we know is right. The Weeknd knows this. He gave an artful nod to the perils of reality, the depravity of man, the whipsaw of every 24 hours this year, and the gift of good song to get us through.

John Romano: With what we know about football, should Vincent Jackson’s death be a shock?

This time, the headline was too close to home. Too disturbing. Too shocking.

Steelers president Art Rooney II told quarterback Ben Roethlisberger on Tuesday the team wants him to return for the 2021 season, agent Ryan Tollner and other sources told the Post-Gazette.

Mike Sielski: Eagles misread Carson Wentz as a person and a quarterback. This trade is the result of that failure.

The drive from Bloomington, Minn., to Fargo, N.D., on the morning of Jan. 30, 2018, five days before the Eagles’ victory in Super Bowl LII, was 3 hours and 45 minutes of earth tones and silence, of the occasional farmhouse amid vast farmland, of a sky without even a bird to puncture the endless gray.

Steelers coach Mike Tomlin and others members of the organization tested positive for COVID-19 last week, sources told the Post-Gazette.

After the 2014 season, the Steelers gave iconic safety Troy Polamalu a choice: Retire or be released.

Vincent Jackson was found dead Monday in the same position that hotel staff had assumed he was sleeping in the previous two days.