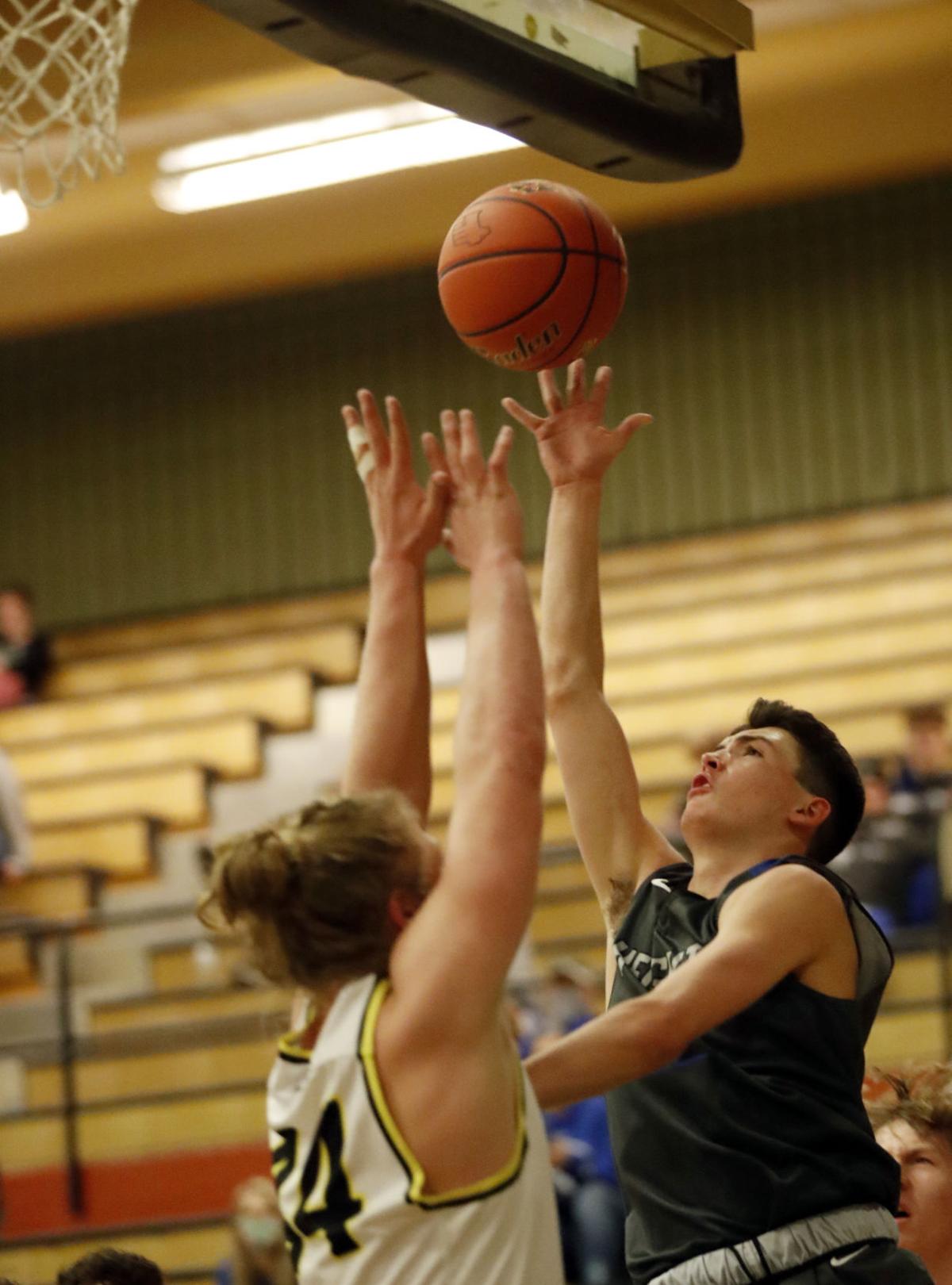 Billings Skyview’s Abe Seybert puts up a shot against the defense of Billings West's Paul Brott Friday night at the West gym. 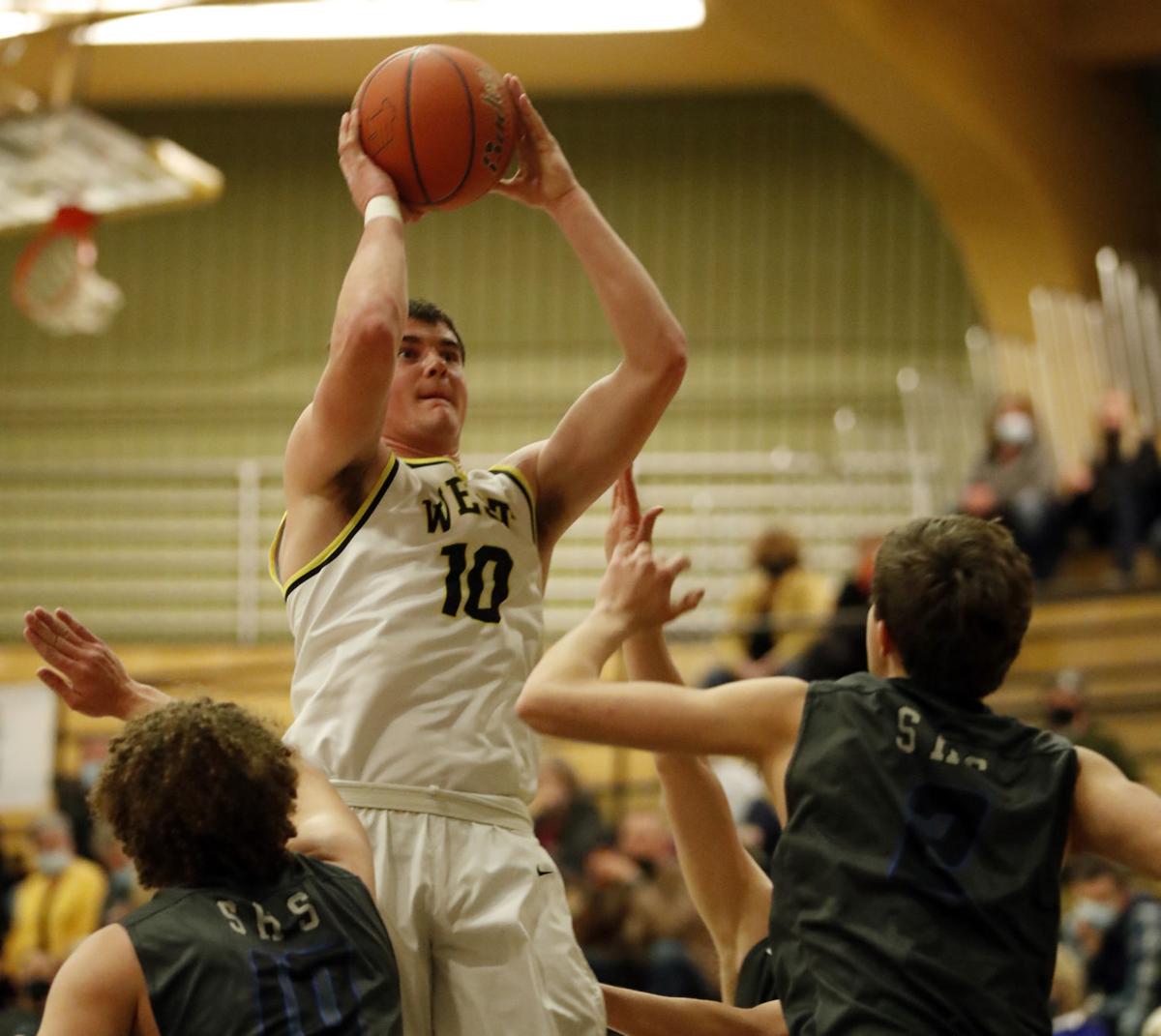 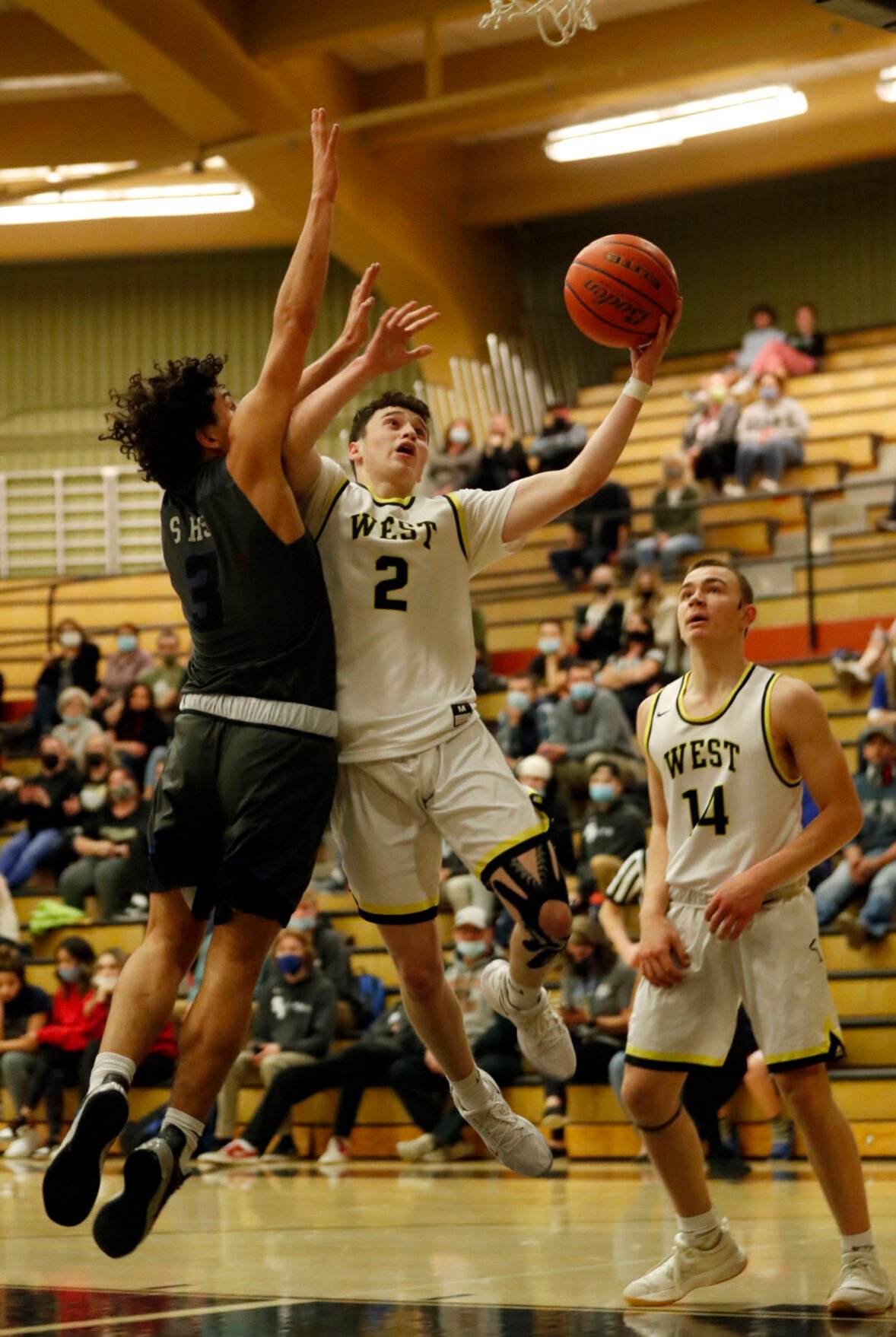 Billings West’s Teagan Mullowney gets fouled on a shot by Billings Skyview’s Payton Sanders Friday. Mullowney left the game with a cut near his eye after going to the ground and didn’t return until the second half.

BILLINGS — One team is hoping it found itself, while the other is ready for a makeover.

Such was the outcome of Billings Skyview’s 67-46 win over Billings West Friday night in the first crosstown meeting of the season for any of the city’s three Class AA teams.

After splitting with the Bozeman schools last week, Skyview, last season’s co-state champion along with Missoula Hellgate, scored a season-high and put up 51 points over the final three quarters. Though the Falcons have plenty of returners from last year’s team, the start to the season has been disjointed at times.

“Way better than the trip to Bozeman,” Falcons coach Kevin Morales said, referencing a 66-56 loss on Saturday to the Hawks. “This is how these kids are, they bounce back. The game of basketball has its ups and downs but they bounced back from the Bozeman loss, came out here and played hard tonight against a crosstown. Pretty pleased with them.”

Just five Falcons found the scoring column, led by Payton Sanders with 25 points and Camron Ketchum with 24. The duo was able to get to the rim seemingly at will, especially in the second half. Ketchum scored 10 of his points in the third quarter to help the Falcons extend their lead to 18 going into the fourth.

Ketchum acknowledged the Falcons would like the scoring more evenly spread, but added the Falcons’ defense paid dividends.

“Our main focus was to start out really intense from the start and it carried out through the rest of the game,” Ketchum said. “We tried to make them hit their shots and get the rebounds and go. They weren’t hitting their shots that well tonight, so we just took advantage of that.”

West (1-2) was coming off a win over Bozeman Gallatin, but even before Friday’s game coach Kelly Darragh said he felt he hadn’t seen what he’s wanted to see from his Bears. They’re breaking in a new perimeter tandem and their focus on playing inside-out with big men Neil Daily and Paul Brott hasn’t produced the results he’s been looking for.

Brott scored a team-high 11 points and Daily added nine, but the more deliberate Bears couldn’t keep pace once the Falcons got going. Darragh pointed the finger mostly at himself.

“We’re going to tear everything down on Monday and we’re going to start something brand new,” he said, “and try and figure out some type of offense where we can do things. It’s kind of a gut-check time for us.

“If it keeps going like this, obviously that’s not good. So we have to make some changes and just figure some things out. That’s on me, that’s my fault.”

The coronavirus pandemic that forced the cancellation of last year’s state tournaments after the semifinals (thus the co-championships) continues to limit the number of spectators allowed at events, so Friday’s meeting didn’t have the usual atmosphere or intensity from the normally large crowds.

Instead, each participant was allowed two guest passes, and the relative calmness of the usually charged game took some getting used to.

But the Falcons, Sanders said, found a way to get past that, and the Bears.

“It was definitely a new experience for me because usually there’s thousands of fans here, yelling and screaming,” he said. “It was kind of weird. How would I say this … it was a little uncomfortable after first, but after we got used to it I felt we got down to business.”

The contests start with a single game Tuesday, and another game will be played on Wednesday. On Thursday, 13 games are scheduled, and one is on Friday.

Billings Skyview’s Abe Seybert puts up a shot against the defense of Billings West's Paul Brott Friday night at the West gym.

Billings West’s Teagan Mullowney gets fouled on a shot by Billings Skyview’s Payton Sanders Friday. Mullowney left the game with a cut near his eye after going to the ground and didn’t return until the second half.