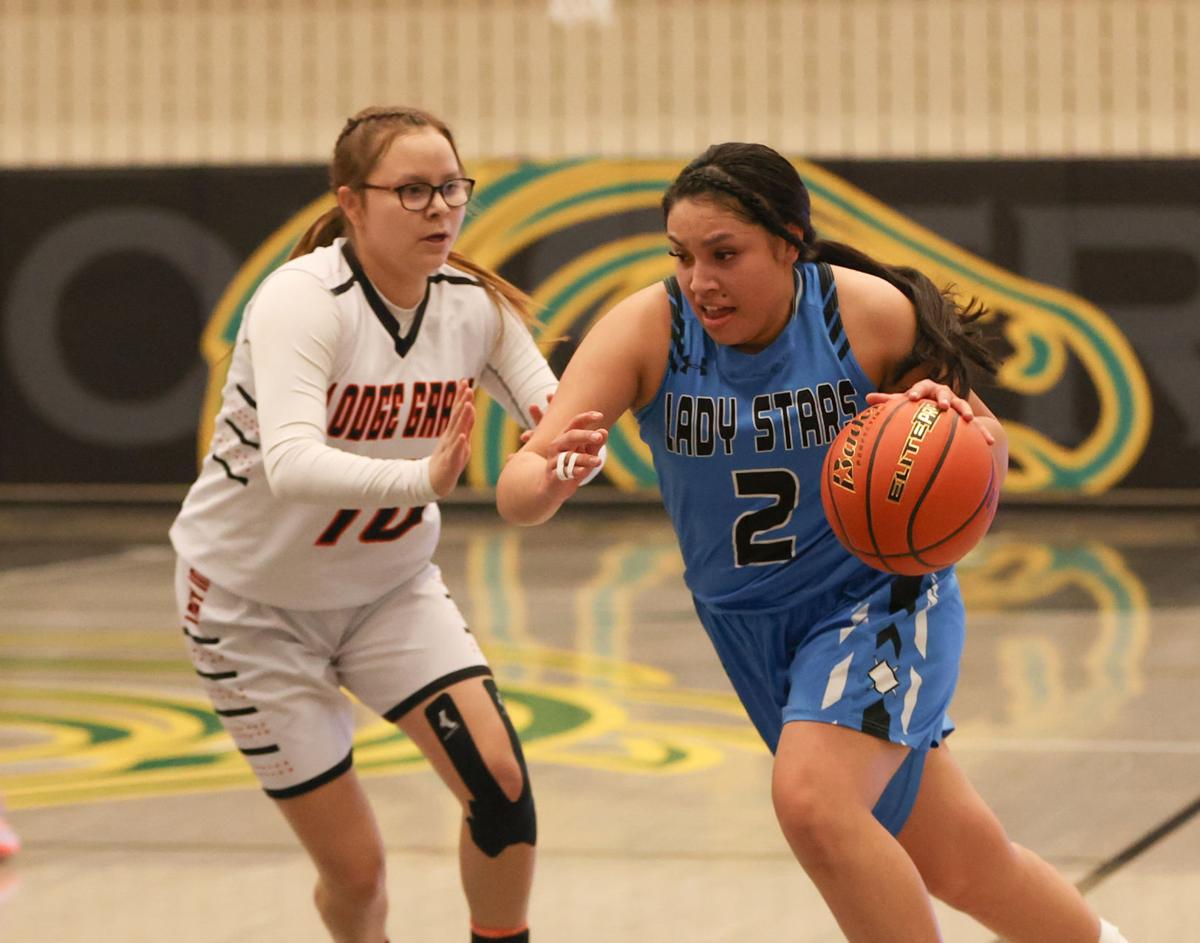 Lame Deer's Jenna Sanders dribbles against the defense of Lodge Grass' Tyressa Pretty On Top on Wednesday night in a District 3B play-in game. Lodge Grass won 52-50 in double-overtime. 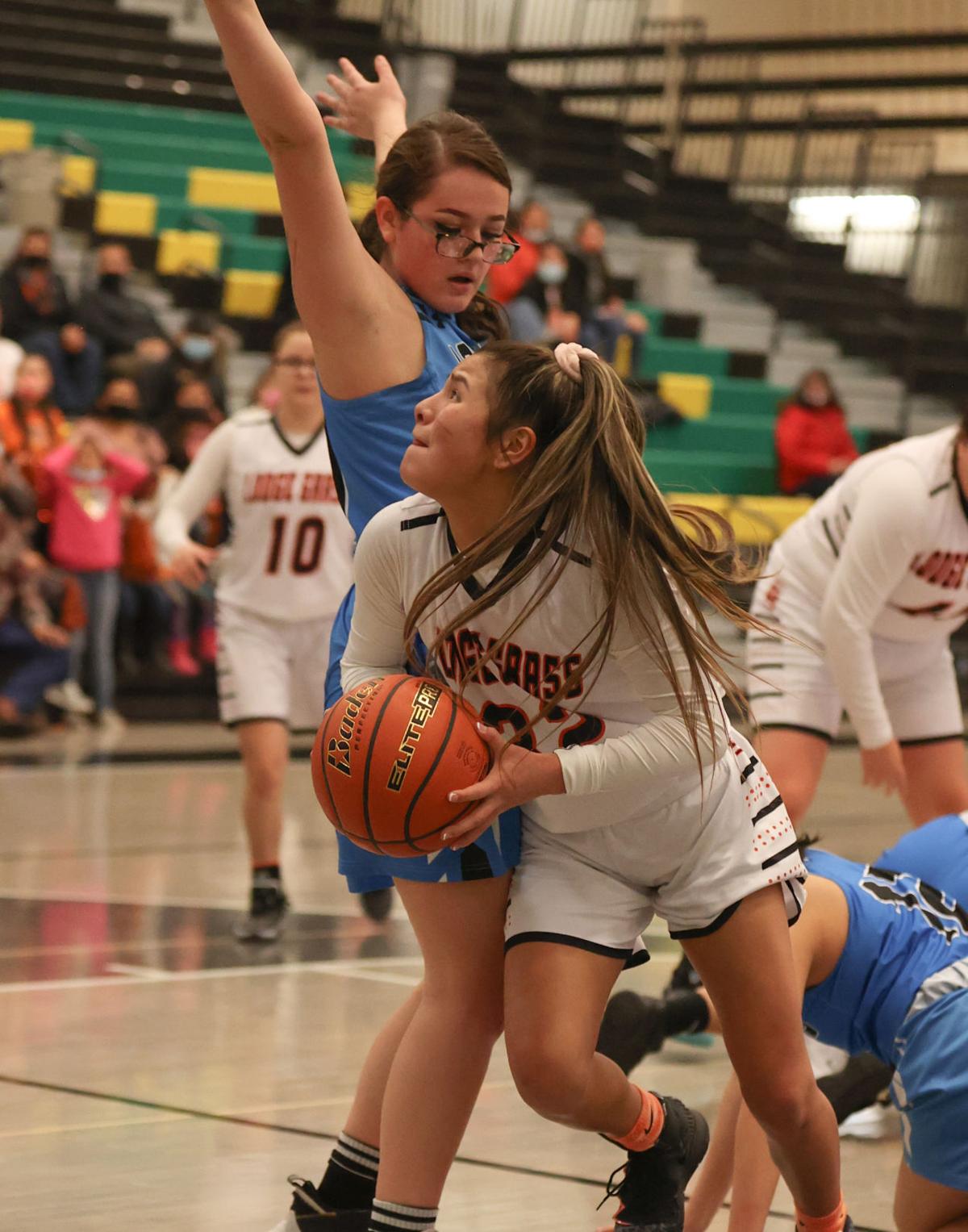 Editor's note: Full Court Press will be updated as we receive results.

• Konner Flint pumped in 26 points and Baker put 10 players in the scoring column in a 63-20 rout of Forsyth in a play-in game. Jaxon Tronstad added seven for the Spartans, who led by 17 points after one quarter and were up 40-9 at halftime. Joe Lackman scored 11 for the Dogies.

• Saco-Whitewater-Hinsdale tossed a 21-0 second-quarter shutout on the way to a 32-point halftime lead and kept up the pressure until the fourth quarter of a 76-30 win over Frazer. The Mavericks led 66-19 after three quarters.

• Dillon Gee popped in 20 points as Broadus raced to a 23-point first-quarter lead and thumped Custer-Hysham in a first-round game. Ten players scored for Broadus. Layne Duncan scored six to lead the Rebels.

• Abe Smith led four players in double figures with 19 points and Terry cruised to a 15-point lead after one quarter on the way to a 70-47 pummeling of Jordan. Giammo Ferrarese scored 17, Wes Braddock 12 and Casper Sackman 11 for the Terriers. Dawson Murnion scored 17 and Jayden Saylor 10 for the Mustangs.

• No. 10 Melstone bolted to a 26-6 lead after one quarter, increased the gap 40 points by halftime and continued on to trounce Plevna 57-12 in a first-round game.

• Blake Harmon and Kyle Harmon were double trouble with 18 points apiece as Chester-Joplin-Inverness raced to a 13-point first-quarter lead, fell behind by a point at halftime, then regrouped in the third quarter for a 54-45 win over Turner. Kealy Haaland scored nine for the Hawks, who led by five after three quarters. Shane Kimmel had 16, Ryan Doyle 12 and Austin Welsh 11 for the Tornadoes.

• North Star won by forfeit over Hays-Lodgepole, which is sidelined due to COVID-19.

• Diamond Amyotte scored 18 points, Shantell Pretty On Top added 13 points and seven rebounds, and Jordan Jefferson had 10 points and 11 rebounds as Lodge Grass held off Lame Deer 52-50 in double-overtime in the game of the night. Jasmine Half provided nine for the Indians. Asia Twomoons scored 13 points, Paris McLean 10 points and nine rebounds, and Jenna Sanders and Madison Doney provided nine apiece for the Morning Stars. Lame Deer had a chance to tie the game after grabbing an offensive rebound from a missed free throw but couldn't get off a shot in time.

• Megan Granbois had the hot hand with 32 points and Makena Hauge had a big day as well with 23 to lead Culbertson past Richey-Lambert 62-34 in a loser-out matchup. The Cowboys led by only two after one quarter but won each of the next three frames by at least eight points.

• Emma Brensdal popped in 17 points and Liv Wangerin was right there with 16 to power Plentywood over Circle 52-24. Plentywood led by 14 at halftime and rolled from there. Ryann Moline scored eight for Circle.

• In a game with no double-figure scorers, Dasani Nesbit led with nine and Froid-Lake pitched a 9-0 third-quarter shutout in fending off Westby-Grenora 33-25. Sydney Dethman added eight for the Redhawks, who led by three at halftime. Brynn Folvag scored eight for the Thunder.

• Abby Begger scored 12 points and Wibaux created some distance from Broadus with an 11-5 third quarter on the way to a 37-29 opening-round triumph. Zeason Schaffer led all scorers with 18 for Broadus.

• Koye Rindal led three players in double figures with 19 points and No. 6 Melstone, playing without injured star junior Draya Wacker, broke to a 25-7 lead and routed Terry 68-26 to open postseason play. Leni Krehbiel scored 18 and Kayla Kombol 15 for the Broncs. Hatty Eaton scored 10 and Meredith Sackman seven for the Terriers.

• Lindsay Lawrence scored 14 points, Brenna Murnion added 10 and Jordan flexed its muscles in the second half of a 39-25 win over Custer-Hysham. The Mustangs led by five at halftime but upped the margin to 10 after three quarters. McKenzie Morrison scored eight for the Rebels.

• Heidi LaBree was the big gun with 24 points as Ekalaka broke to a 12-point first quarter lead and then poured it on in the third quarter for a 57-19 romp over Plevna. Tyra O'Connor added eight for the Bulldogs, who outscored the Cougars 21-3 in the eight minutes after intermission. Jaeda Paul led Plevna with eight points

• Keane Blacksmith poured in 23 points and Plenty Coups pulled away in the fourth quarter for a 51-42 opening-round triumph over Park City. Serena Flatlip scored 10 for the Warriors, who led by two points before outscoring the Panthers 18-11 over the final eight minutes. Isabelle Adams scored 13 and Abby Hoffman nine for Park City.

• Emily Adkins did it all for Bridger, scoring 23 points to lead the Scouts past Broadview-Lavina 40-34 in a first-round game. The Scouts led by 14 at halftime and kept the Pirates at bay thereafter. Hailey Fiske scored 14 for Broadview-Lavina.

• Emma DeVries led the way with 15 points and Roberts dug itself out of an early hole and downed Absarokee 50-44. Hailey Croft scored 10 points and Kenzie Pitts had eight for the Rockets, who trailed by seven after one quarter but rallied to tie by halftime. Lexi Feddes scored 16 and Makenzie Walton eight for the Huskies.

• Lindsey Paulson scored 21 points, Hattie Bumgarner added 11 and No. 7 Belt had no trouble dispatching Winnett-Grass Range 58-19 in a first-round game. Sabrina Wing provided nine points for the Huskies, who led 15-2 after one quarter and by 21 points at halftime. Sheri Browning scored nine and Erika Benes eight for the Rams.

• Madeline Heggem scored 12 points, and Jayda Southworth and Isabelle Heggem provided 10 apiece to lead No. 8 Roy-Winifred to a 60-15 romp over Centerville in its tournament opener. Megan Bergum added nine for the Outlaws, who led 19-2 after one quarter. Mollie Kerkes scored eight to lead the Miners.

• Hays-Lodgepole sprinted to a 25-5 lead after one quarter, build the margin to 32 by halftime and went on to drub Big Sandy 57-26.

For all your basketball box scores from around the state, go to 406mtsports.myteamscoop.com.

Rocky Erickson: It was a long day for a broadcaster, but not the longest by a mile

Results from around the state on Wednesday.

Lame Deer's Jenna Sanders dribbles against the defense of Lodge Grass' Tyressa Pretty On Top on Wednesday night in a District 3B play-in game. Lodge Grass won 52-50 in double-overtime.