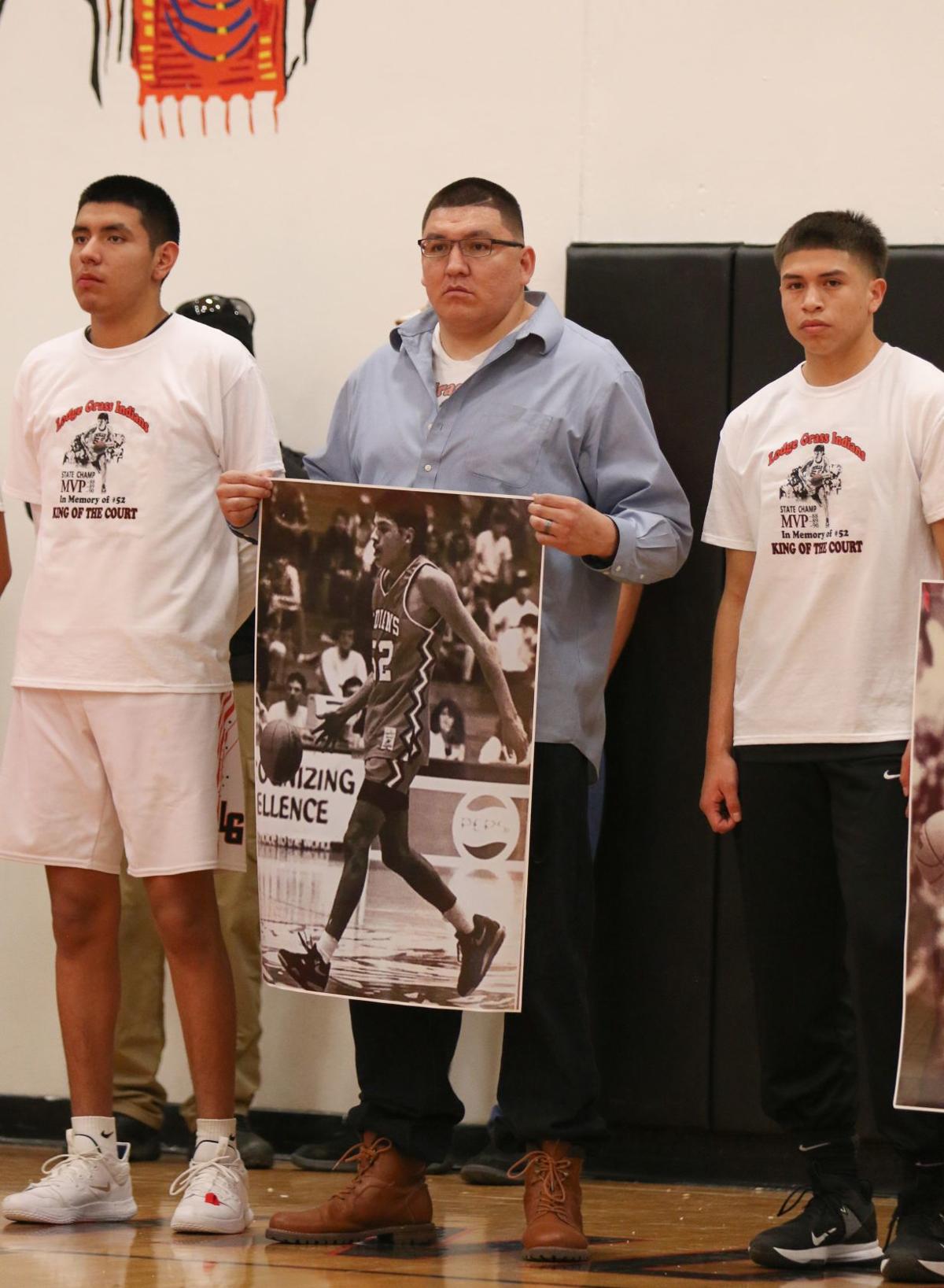 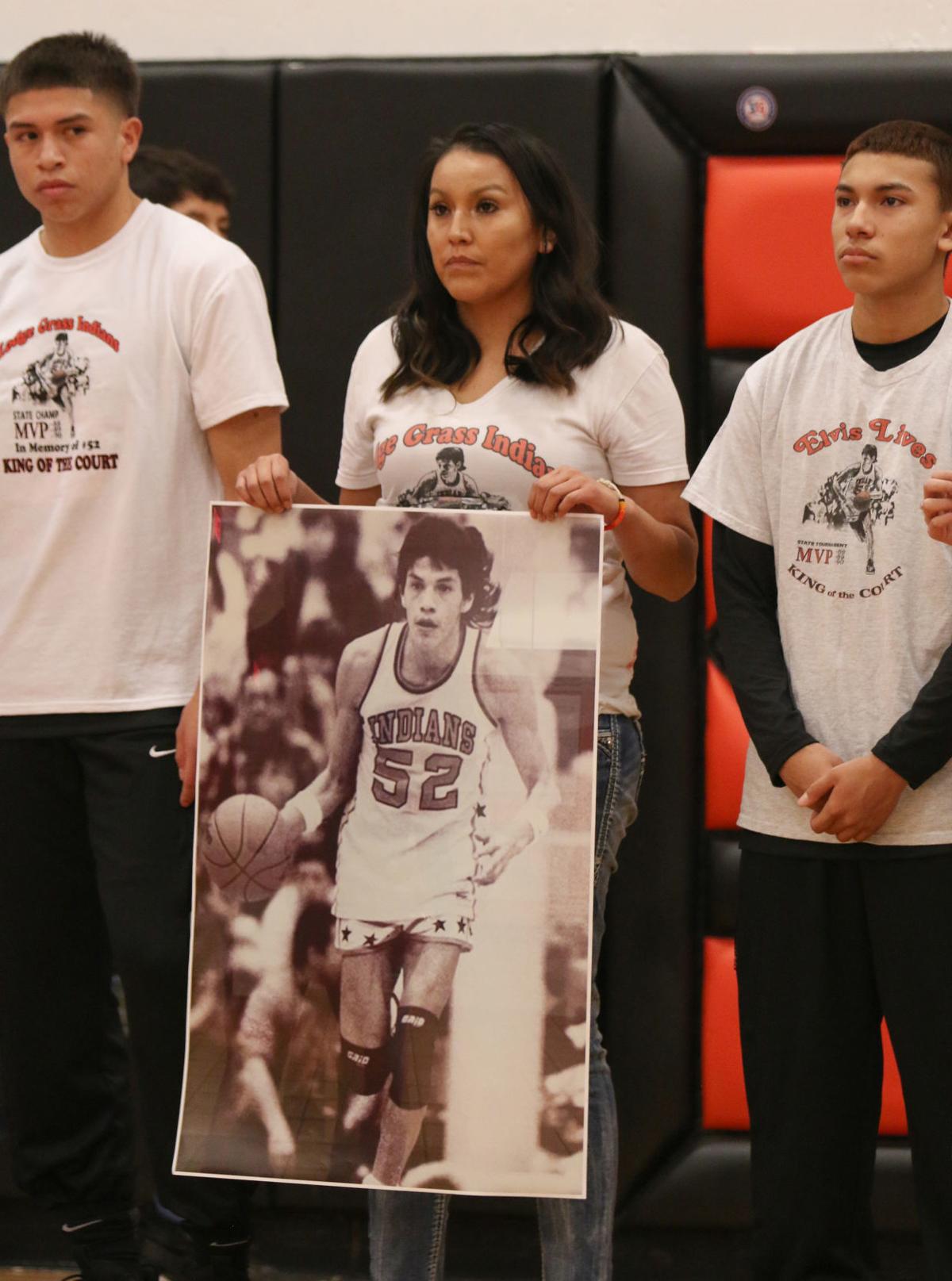 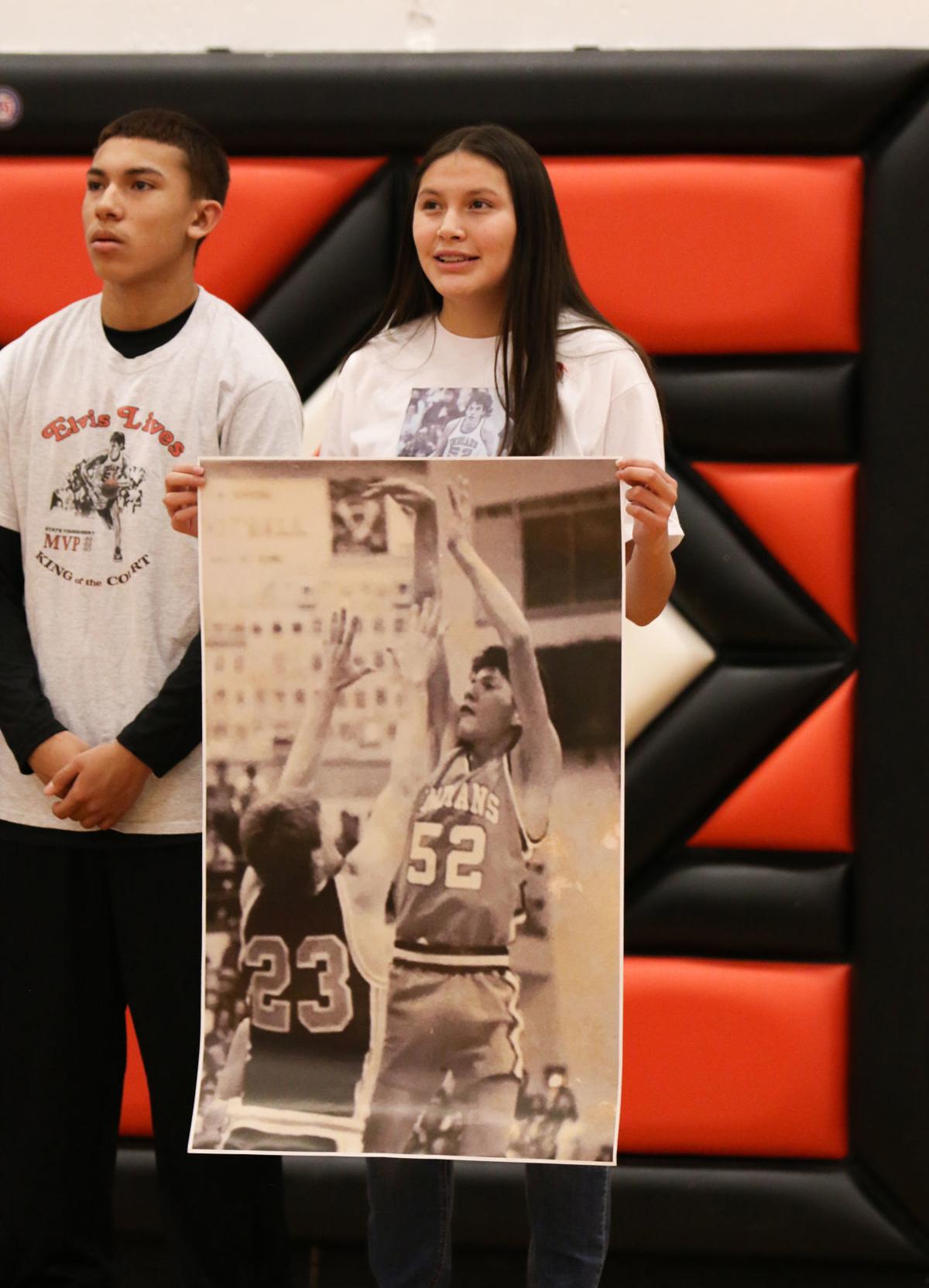 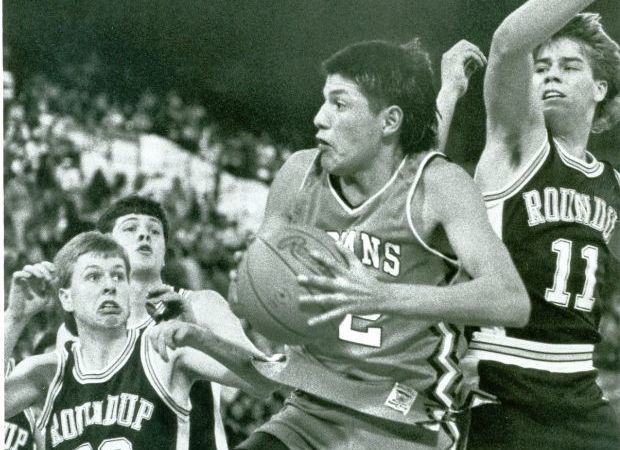 Not a bad way to “honor The King.”

The day honored the late Lodge Grass basketball legend. Hardin’s 112-92 win did little to bring Stewart down. He was happy that Thursday’s celebration of Old Bull went so well.

Stewart, Lodge Grass mayor Quincy Dabney and Crow Tribe human resources director Albert Gros-Ventre were three of the main people to make Elvis Old Bull Day a reality, Stewart said. With the support of the Lodge Grass school board, the special day was put on the calendar months ago.

Those leaders chose Jan. 16 because it included the boys and girls basketball games between Hardin and Lodge Grass.

“That’s the biggest game for Crow people,” Stewart told 406mtsports.com on Saturday. “All the Crow people could be a part of it.”

Old Bull led Lodge Grass to Class B state boys basketball titles in 1988, 1989 and 1990, and those championships are commemorated on banners in the Indians’ gym. Another banner was raised beside them on Thursday.

The new banner features Old Bull’s name at the top. Below are his jersey numbers (52 and 53), a couple accolades (three-time state Class B champion, three-time state MVP) and those three championship years.

Old Bull’s legacy transcends stats, but those are legendary, too. He scored more than 1,900 points, averaged nearly 20 points per game and once dished 22 assists in a game. He set 16 school records, was inducted into the Montana Indian Athletic Hall of Fame and made Sports Illustrated’s list of Montana’s 50 greatest 20th century athletes.

“When I was younger, it was almost like seeing Michael Jordan,” Stewart said. “He’s not just a local legend. He’s a true legend.”

"To honor him with Elvis Old Bull Day is one of the highest honors you could give to him," Old Bull Jr. said. "Me and my family were really proud and happy."

Other Crow basketball legends such as Larry Pretty Weasel and Mike Chavez were also in attendance.

People lined up outside the gym for hours before it opened, Gros-Ventre said, and it was standing room only during the games.

A 112-92 score is common in a 12-minute quarter, 24-second shot clock NBA game. It’s rare, to say the least, to see those point totals in an eight-minute quarter high school game that operates without a shot clock.

That doesn’t mean anyone was shocked that the Bulldogs and Indians bombarded the scoreboard. Hardin, the No. 1 team in the 406mtsports.com Class A rankings, features several players who have earned all-state honors and more who aren’t far off. Lodge Grass is also deep and talented, as its No. 1 Class B ranking indicates.

Few, if any, teams in Montana play faster than the Bulldogs and Indians. That combination of talent and pace led to Thursday’s eye-popping score.

The current plan is for Elvis Old Bull Day to be an annual occurrence, and it won’t necessarily be Jan. 16, Albert Gros-Ventre said. The only thing that matters is honoring “The King."

“Just a day where we can always remember him,” Gros-Ventre said.

Mark Branger thought he had retired from coaching following the 2015-16 season with the Red Devils. But now he's back.

The Montana High School Association determined the spring 2021 state sites and most of the 2021-22 locations.

Powers previously has coached at Butte High and a small school in North Dakota. 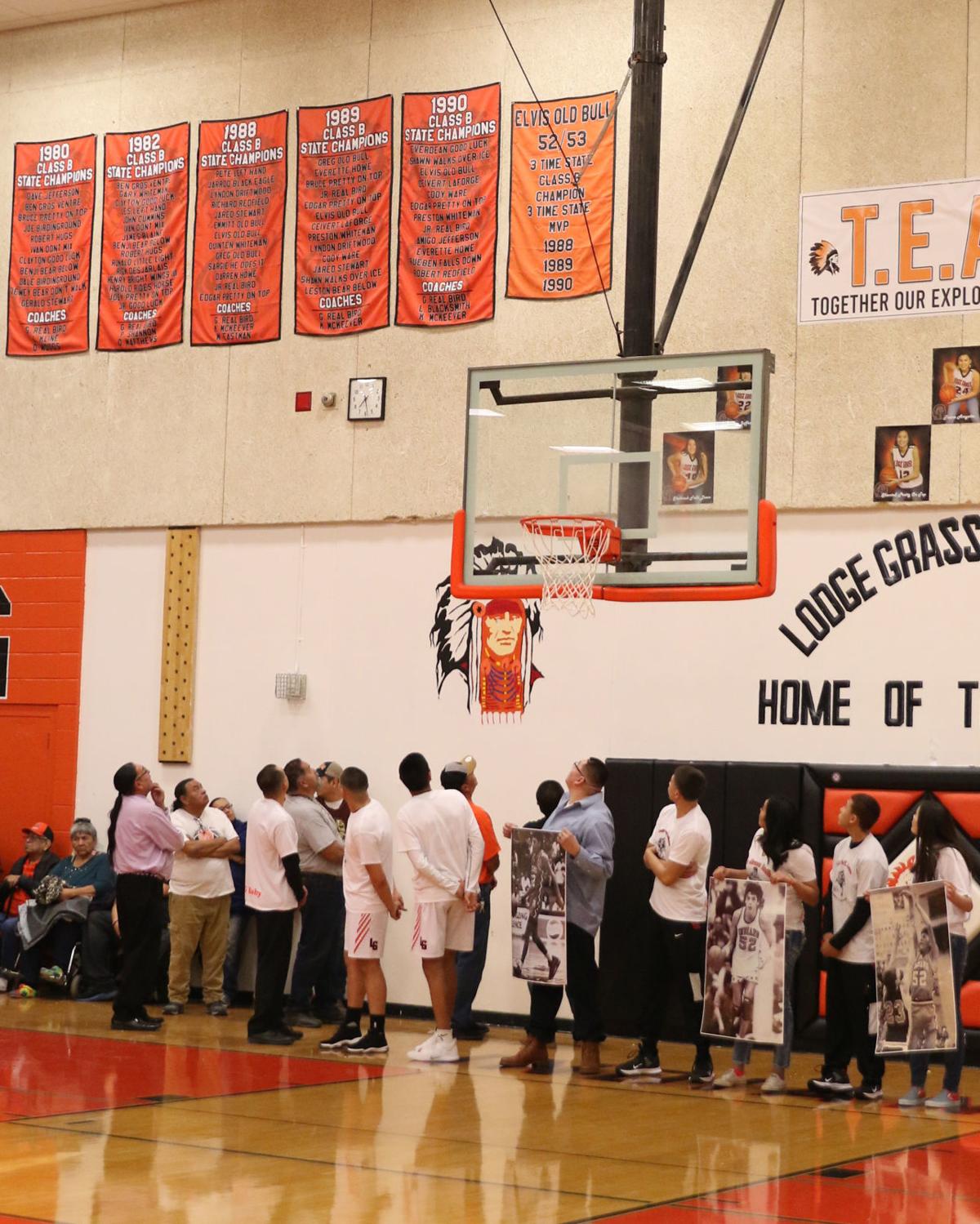 Players and other spectators look at a banner honoring Elvis Old Bull on Thursday, Jan. 16, 2020, at Lodge Grass High School. 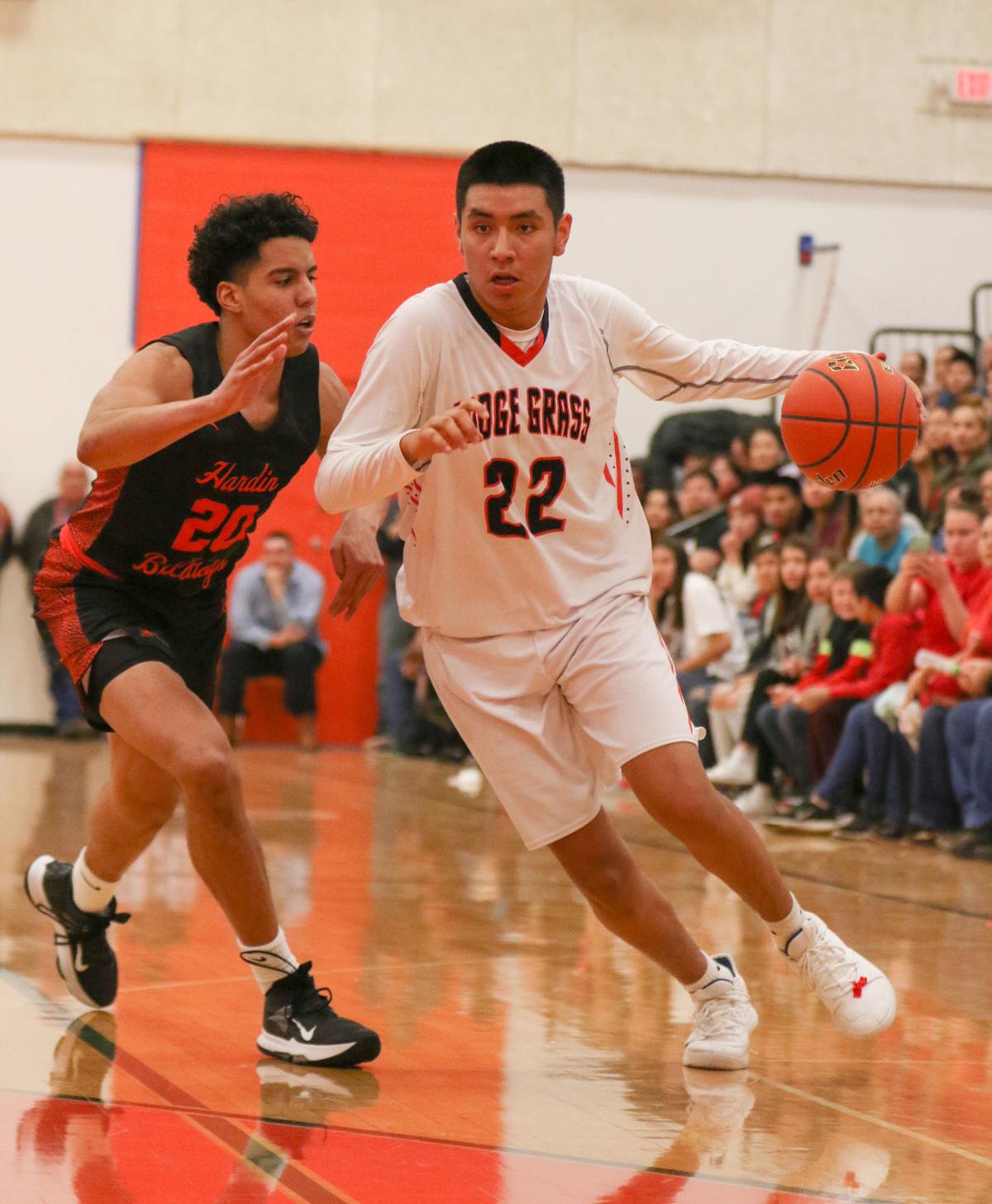