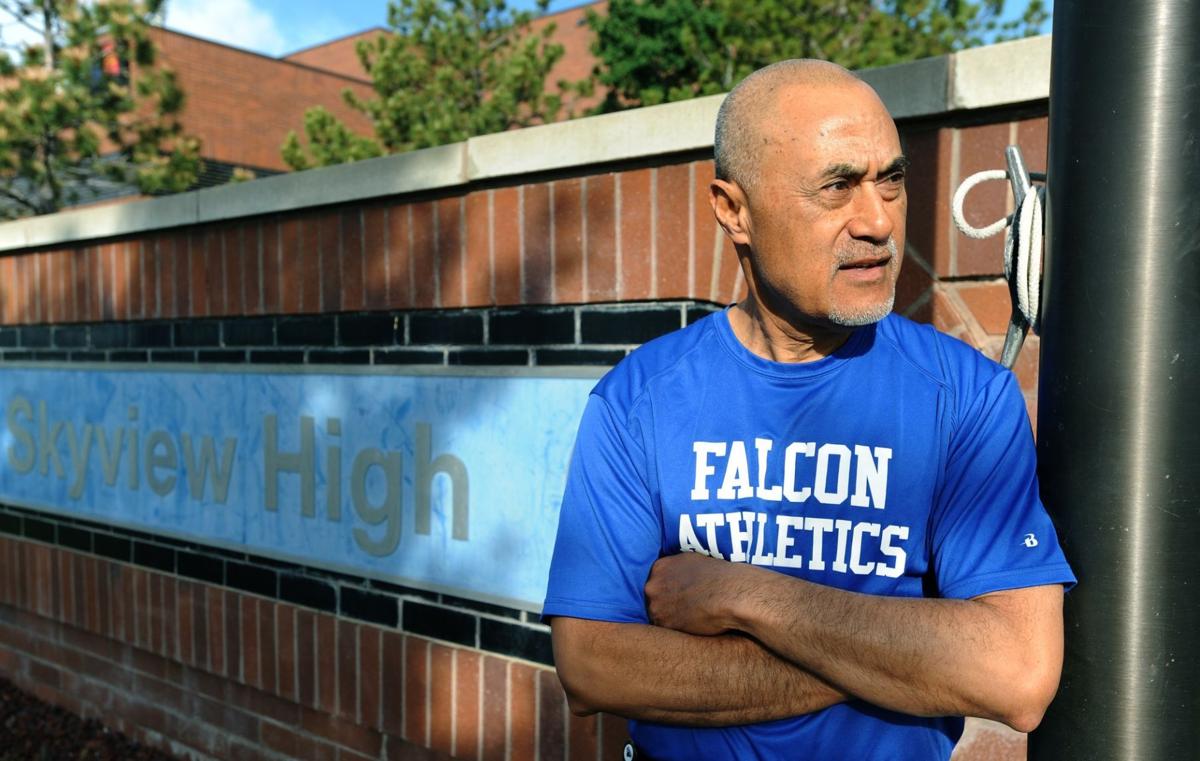 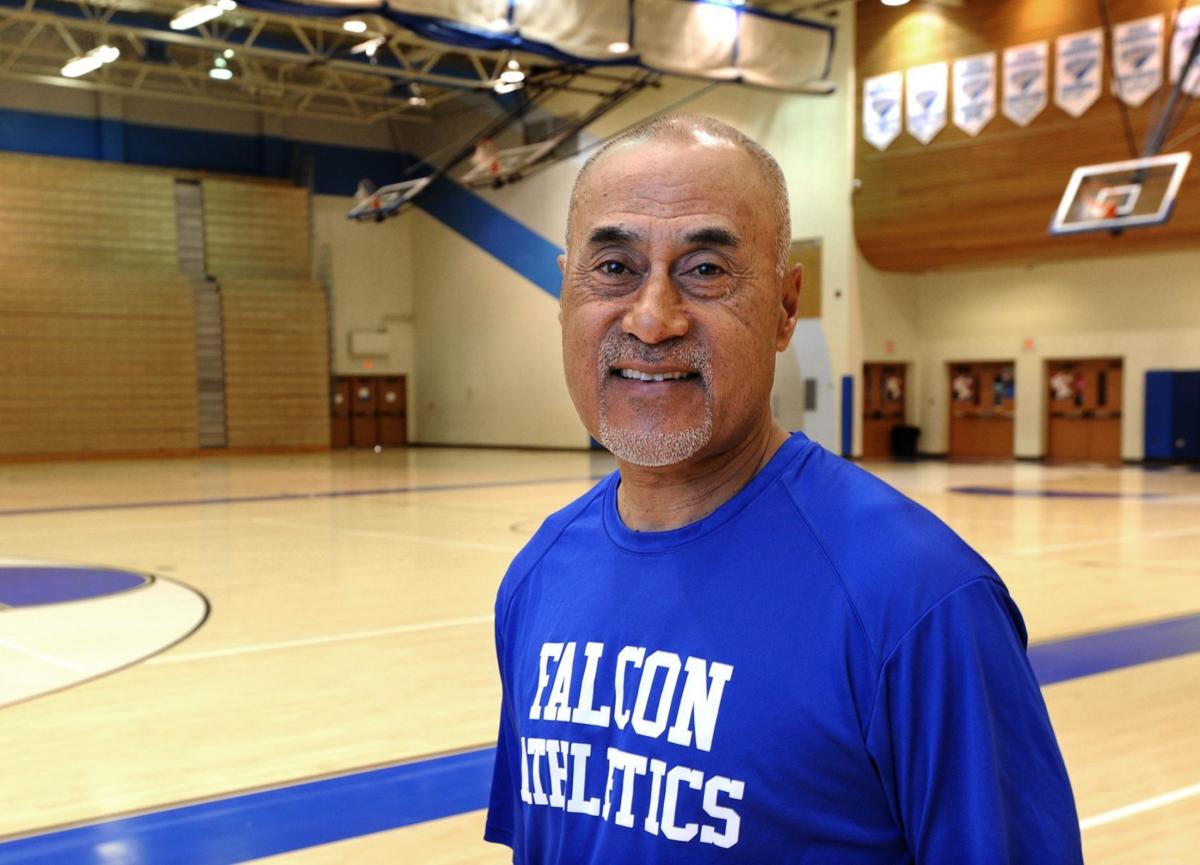 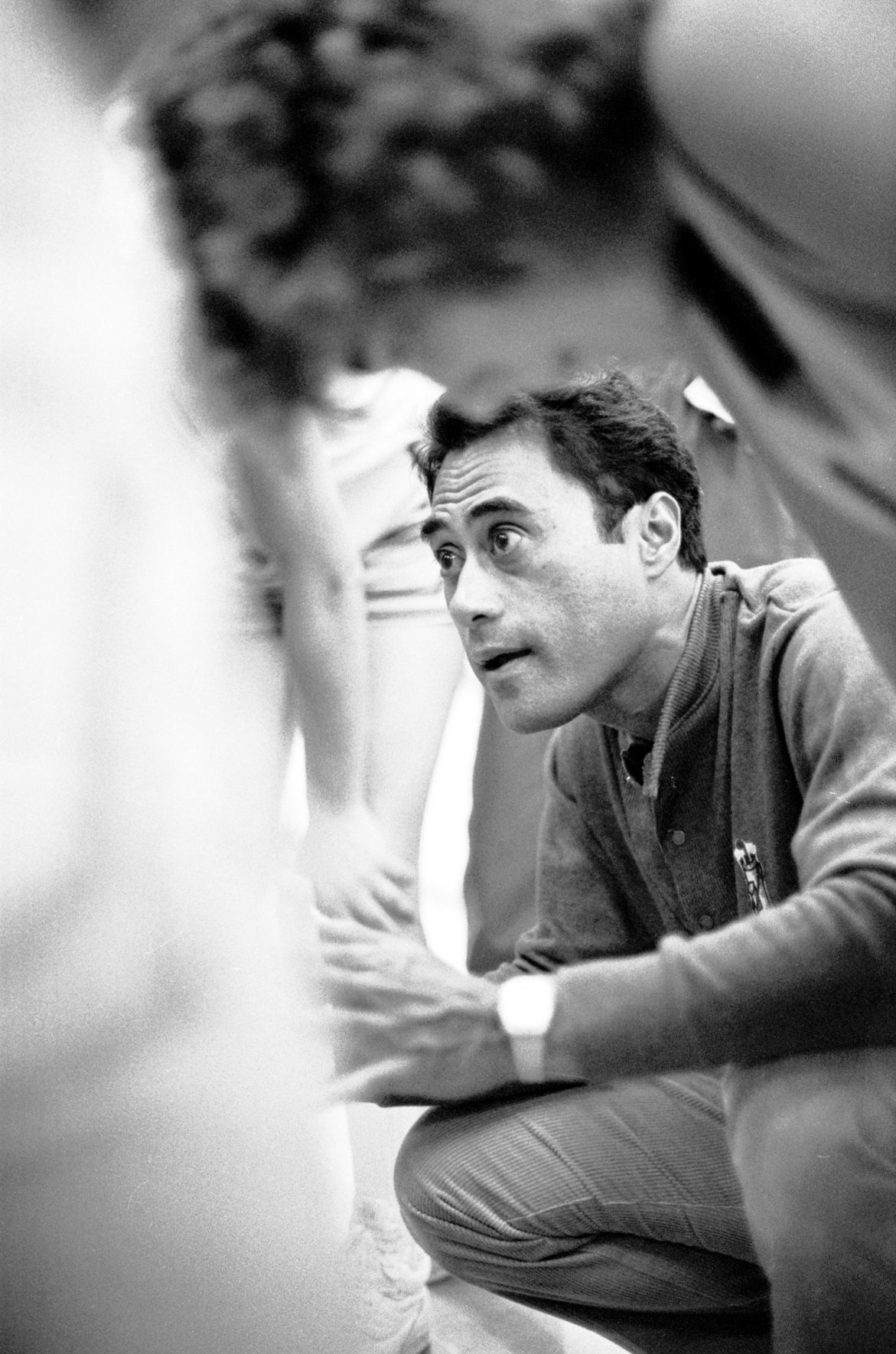 Kas Ioane talks to players while coaching girls basketball at Billings Skyview in a Sept. 20, 1985, game against Lodge Grass.

Kas Ioane did it all at Billings Skyview.

He was an educator first and foremost, but he'll also be remembered as Skvyiew's first boys and girls basketball coach; a sprints, relays and hurdles assistant coach on the track and field team; and for guiding the Falcons to three state golf championships.

When school ends Friday, Ioane will leave the office by the lower gym for the final time, the office he's shared with football coach and fellow physical education teacher Ron Lebsock since Skyview opened in its present location in 1987. Ioane's closing chapter will end the novel of a 39-year career as an educator and coach, all of which came in School District No. 2.

"It's just great being part of a history from where we started being at Lincoln Center and moving out here," said Ioane, 65, who retires with the title of health enhancement teacher and head golf coach.

"There are so many things. Skyview itself as a school, I'm very proud of. And the kids we turned out academically. I'm very proud of them. Some have gone on to the community and some other places. And sports, all the championships we've had here, and it's been for the betterment of the community. It's about what the kids have done."

Kip Ioane, the oldest son of Kas and Rhonda Ioane, graduated from Skyview in 1997 and is currently the head men's basketball coach at Willamette University in Salem, Ore. Ioane said his father took his duties as an educator at Skyview very seriously.

"He raised us in Billings and he really looked at Skyview as another one of his kids," he said. "He was a member of that school since the beginning. Skyview was the third kid in his family. Skyview was ingrained in our family. It is a part of our life."

Kip Ioane can remember going to Skyview games with his mom and younger brother Kane at Castle Rock Middle School, where the Falcons played during their first two years before the high school opened. Kas was the boys basketball coach at Skyview for seven years, resigning after the 1991-92 season, and was the girls coach for the program's first season.

Kas Ioane also spent time at Riverside Middle School and Lincoln Junior High and also coached multiple sports as an assistant and head coach at both schools. After resigning as boys basketball coach at Skyview, he joined his alma mater, Eastern Montana College, in May 1992, as a women's basketball assistant under Frank McCarthy.

One of Ioane's favorite moments was when the 1987-88 Skyview team qualified for the State AA boys basketball tournament.

"It was tough trying to get the programs going," he recalled. "We were so young and a young school and had young kids coming in.

"For us to make it there (to the state basketball tourney), was a tribute of hard work to the kids. That was their goal, to get there and to top it off winning the state track and field championship with a great bunch of kids."

Ioane was born in American Samoa. When he was 10, his parents moved him and his three brothers to East Los Angeles.

While it would be hard to know now with his at-times booming voice, facial expressions and likable personality, Ioane struggled with English at first. A counselor recommended that he enter the military and not attend college.

"That is why he chose education, so he could help influence kids who didn't have the positive influences all the time. So he could be in their corner and say, 'I did it, you can do it, too,' " said another son, Kane, a 2000 Skyview graduate and now an assistant football coach at Montana State.

Troy Trollope is the physical education department chair and head athletic trainer at Skyview and has shared an office with Ioane and Lebsock for 10 years. He said Ioane is known for his "Kas-isms" of positive thoughts around the building.

Trollope's favorite is: "God don't make no junk," which references Ioane's commitment to every student.

"The thing about Kas is he's had a special impact on everyone he dealt with, students, colleagues, friends, and the community," Trollope said. "He's taught me a lot personally in my coaching and teaching. I'd like to think part of him will be here with me. He's such a positive, motivating guy at Skyview and that will be missed."

"He is so appreciative of everyone around him and brings a good mood to the classroom," said Nelson. "If you are having a rough day, he'll make it a better day and put a smile on your face.

Ioane came to Montana after playing basketball at East Los Angeles College for two years. Mike King, who was two years older than Ioane, played baseball at Eastern Montana (now Montana State Billings) and was familiar with Ioane because their California schools played in the same league.

Ioane is a member of MSUB's athletic hall of fame.

"Harkins was a father to me and made sure I was going to classes," Ioane said. "My father wanted me to graduate from college, and coach Harkins made sure I was going to school. ... He was my father away from home. I'm so thankful he offered me the scholarship and I was able to play. I'll always remember EMC gave me the opportunity to go to college."

While at EMC, Ioane met his wife of 40 years, Rhonda, a former rodeo queen and barrel racer. Rhonda recalled that Kas always flashed his magic personality on the court while playing and coaching.

"He would smile at the officials and get lots of calls going his way," she said. "He always said there is no point in arguing with them. You might as well smile and get a call. And the next time, you would get a call."

Once Ioane was entrenched in Montana, he wasn't going to leave.

"He ended up loving Montana and we haven't left the snow yet," Rhonda said. "But, I am planning on spending some time away from the snow, finally."

McCarthy, now the women's basketball coach at Sheridan (Wyo.) College, said Ioane inducted him into the MSUB Hall of Fame.

"He was one of the best assistants I ever had as far as loyalty and was one of the most positive, energetic coaches I've ever been around," McCarthy said. "I've never met an assistant coach who was more loyal than Kas Ioane. He was a pleasure to work with and an honor to know him. I consider him one of my best friends."

When the bell rings for the final time Friday, it will signal an end of an era. For the first time since Skyview opened, Ioane's spot in the PE office will be vacant. That won't be lost on Lebsock, who has shared that office with Ioane since the beginning.

"I've learned more about teaching and coaching and being a good person in the last 29 years from Kas Ioane, and it's been all positive," Lebsock said. "I will miss him and all the teachers will miss him.

"I feel sad for all the young people coming up who won't be around coach Ioane. He sincerely cared about every one of the young people. ... He was always ready and willing to be that angel in somebody's life who really needed it."

While Kas Ioane ends his tenure with School District No. 2 Friday with his retirement, his wife, Rhonda, also will be retiring.

Both Kas and Rhonda's last days of employment are Friday. Rhonda is retiring from Billings Montessori School after 30 years.

And while they'll spend time golfing together and go on trips, the Ioane's will continue to call Billings home.

"This is who I am. Billings, Montana, for me to go back to California would be different," said Kas. "Billings, Montana, has been a home for me and I'll cherish it the rest of my life. My wife and I met in college and we've been married for 40 years. The people have been great. You can't beat that."

The Ioane's two sons are college coaches. Kip is the head men's basketball coach at Willamette University in Salem, Ore., and Kane is the co-defensive coordinator/linebackers at Montana State University. Kas and Rhonda will try to attend as many games as possible. Trips to visit relatives "from San Diego to Seattle" are also planned, said Kas.

Kas is a native of American Samoa and the family wants to see where he came from. Rhonda, Kip or Kane have never been to American Samoa. Kas hasn't been back to his homeland since 1960.

"We want to try, my brother and I both, to plan a trip and get all of the family together again and get over to Samoa and make a pilgrimage," said Kane. "My dad can show us around. We still have some family over there. It would be awesome. That is one thing over the retirement years we will try and schedule."

And while Kip hopes to take his dad to an Oregon Ducks game, although he is a "USC guy growing up in L.A.", Kas Ioane's heart will always belong to Skyview.

"There is no question I'll always be a Skyview Falcons person and on the sidelines with coach (Ron) Lebsock and watching boys and girls basketball," Kas said.

What a wonderful article by John Letasky about the retirement of Kas loane from his 39-year teaching and coaching career. Kas deserves all the…

Billilngs' Ioane family is 1 of the best

I was so pleased to read the June 4 feature on Kas Ioane in a recent edition. Never having met Kas, I have followed his career for years in th…

Kas Ioane talks to players while coaching girls basketball at Billings Skyview in a Sept. 20, 1985, game against Lodge Grass.