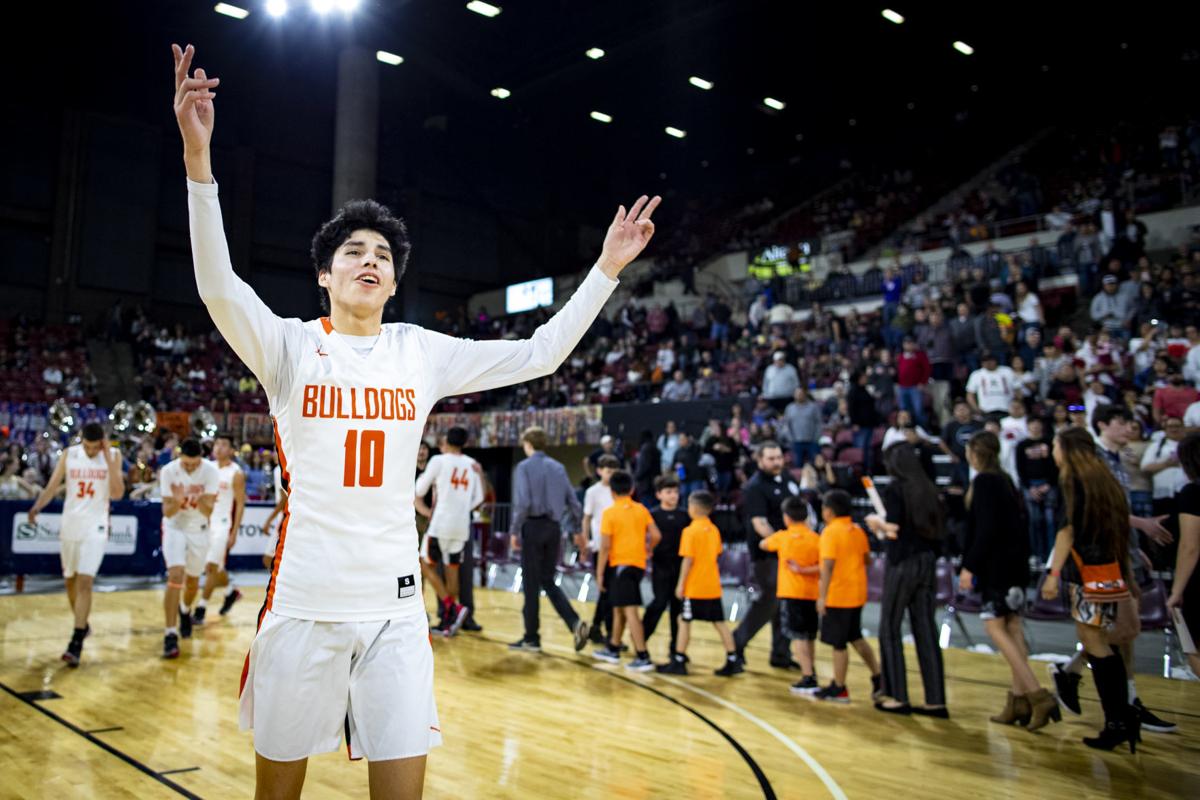 Hardin's Trae Hugs raises his arms after the Bulldogs beat Livingston in the the Class A state semifinals at First Interstate Arena at MetraPark on Friday. 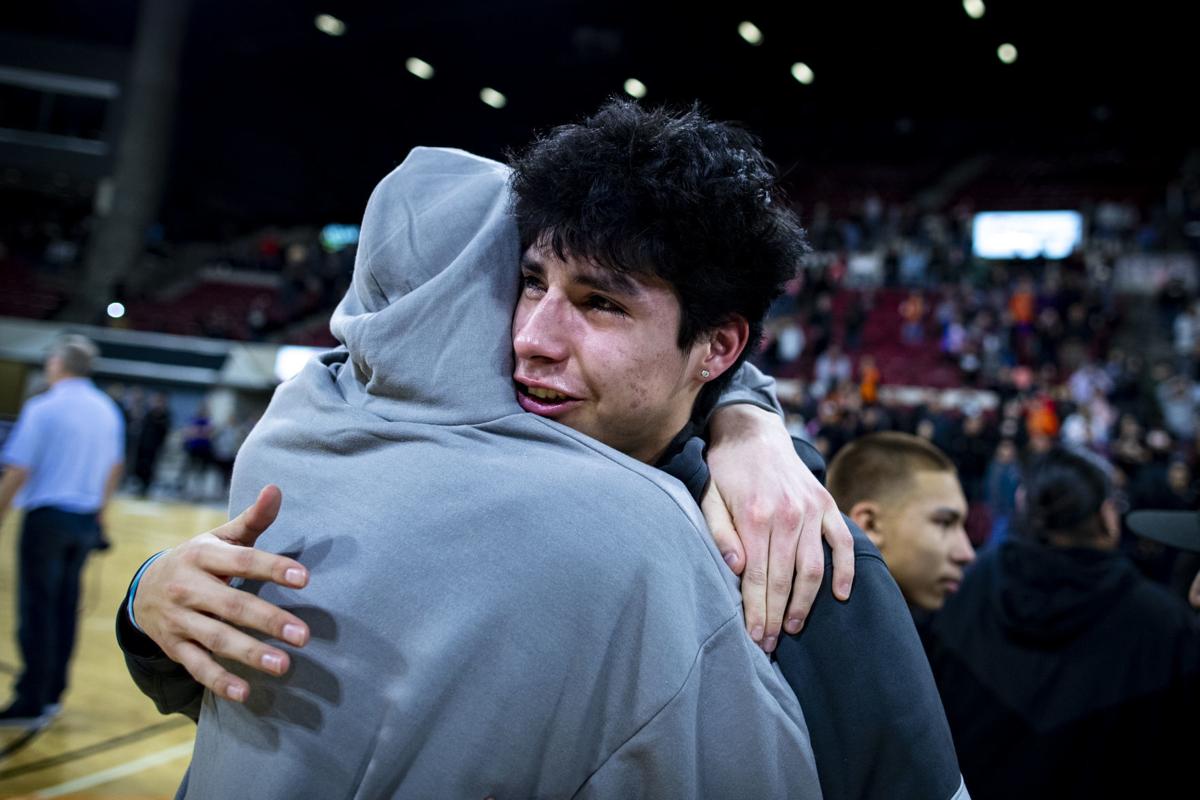 Hardin's Trae Hugs gets a hug from Livingston's Brendon Johnson, front, at First Interstate Arena at MetraPark on Friday, March 13, 2020. 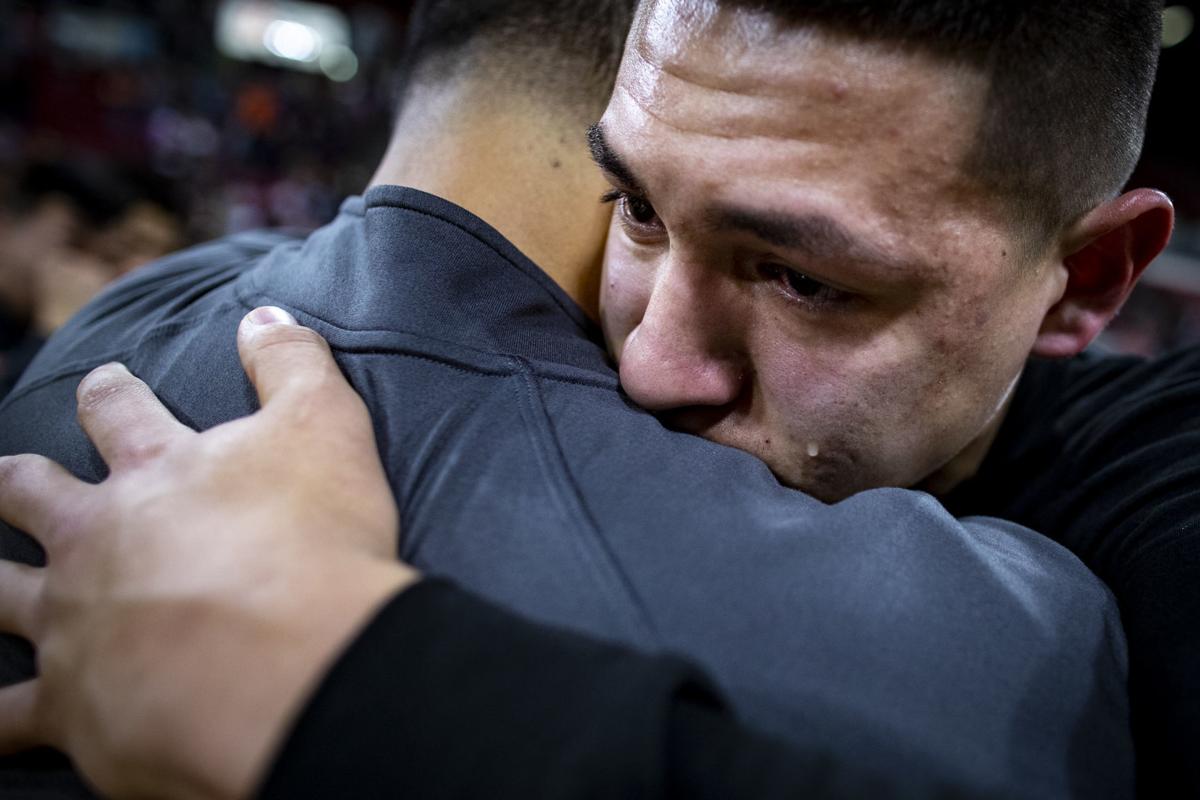 Hardin's Cayden Redfield (24) sheds a tear as he hugs Hardin's head coach Andrew Round Face after the Hardin Bulldogs' game against the Livingston Rangers in the semifinal round of the Class A state tournament at First Interstate Arena in Billings on Friday, March 13, 2020. 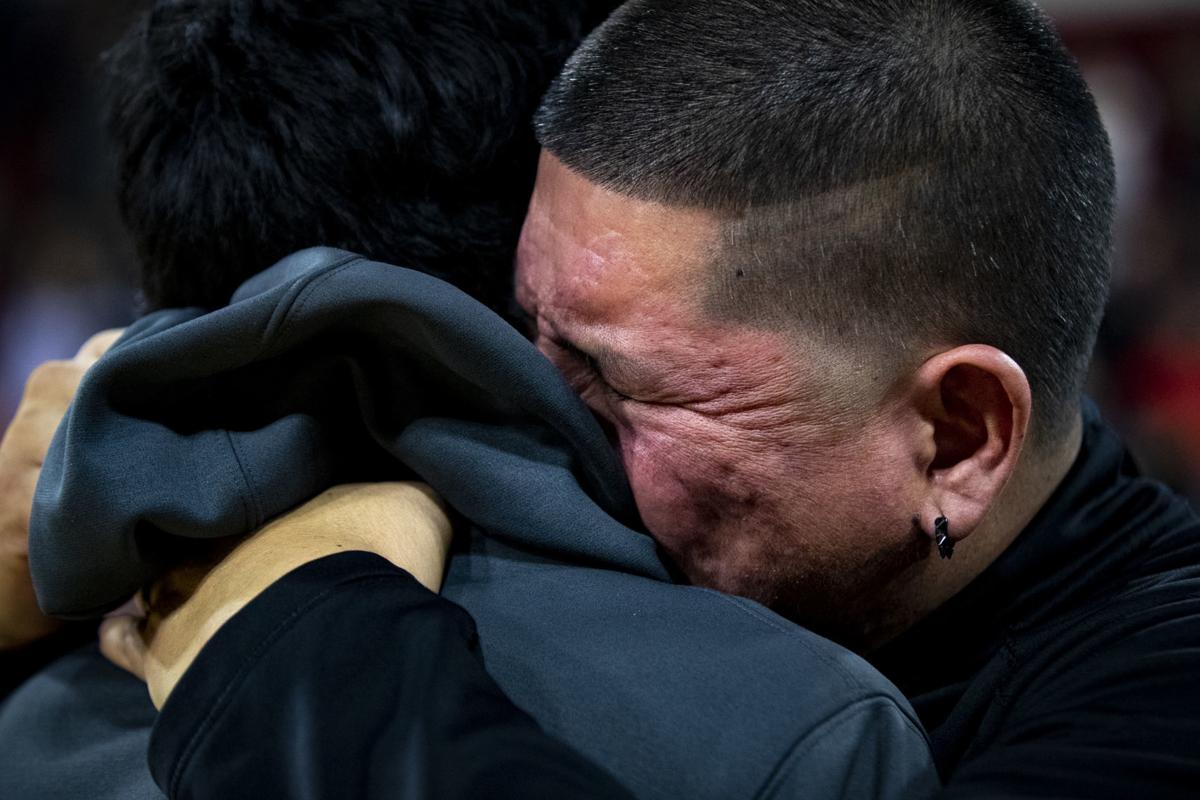 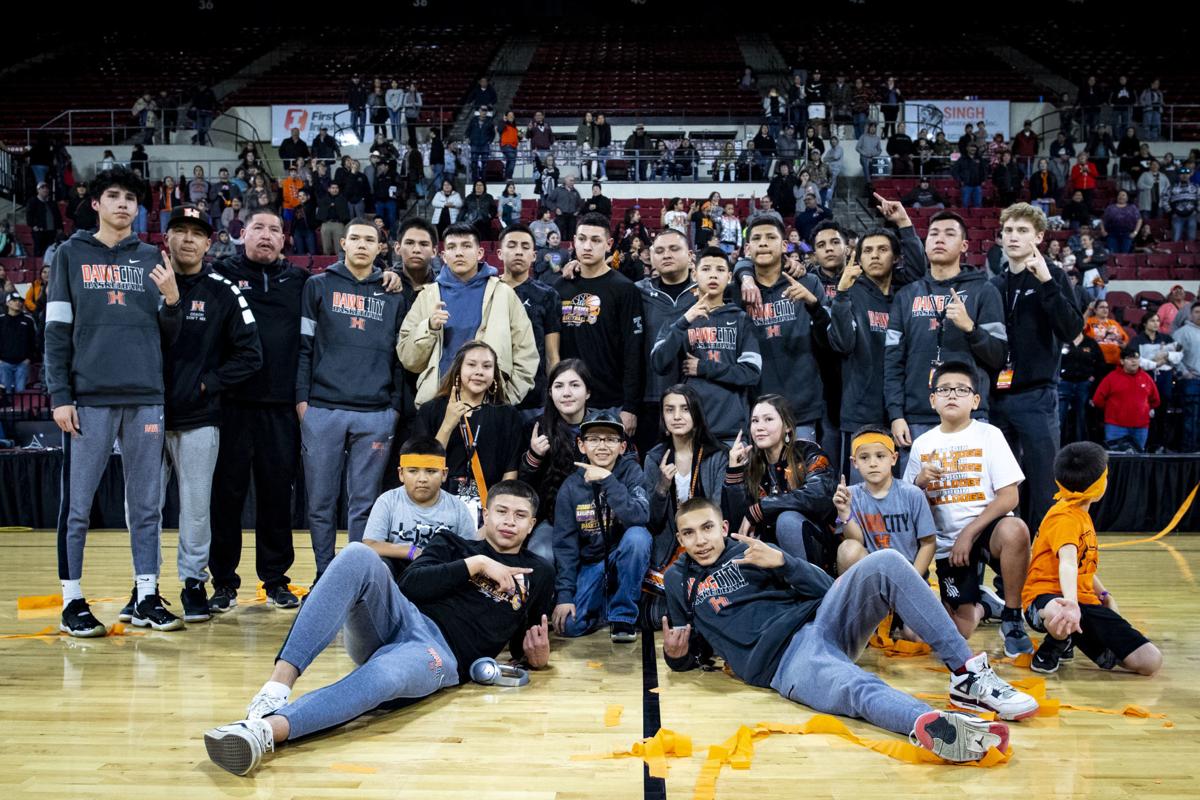 Hardin boys basketball players and coaches pose for a picture at First Interstate Arena in Billings on Friday, March 13, 2020. 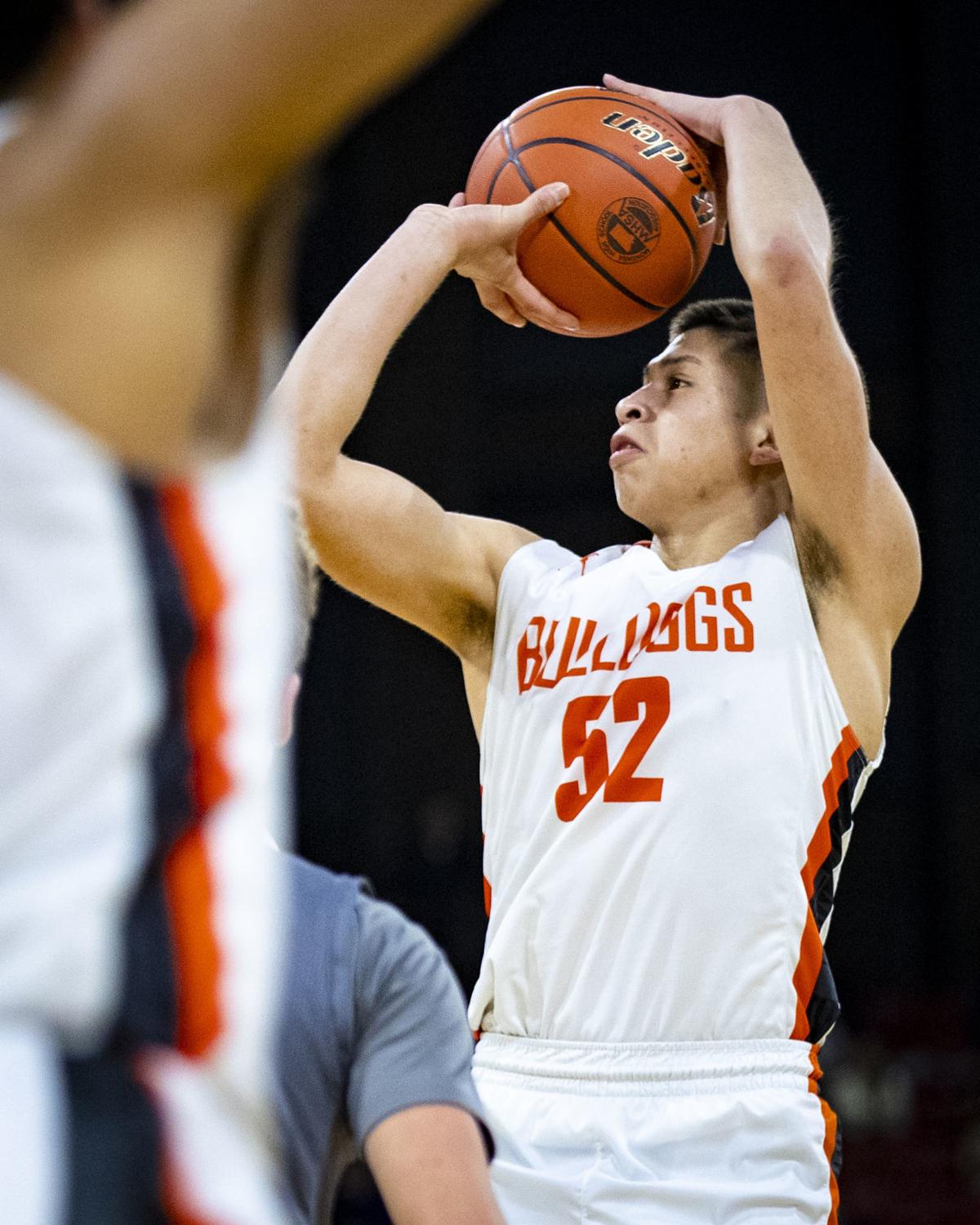 Hardin's Famous Lefthand (52) shoots during the Hardin Bulldogs' game against the Livingston Rangers in the semifinal round of the Class A state tournament at First Interstate Arena in Billings on Friday, March 13, 2020. 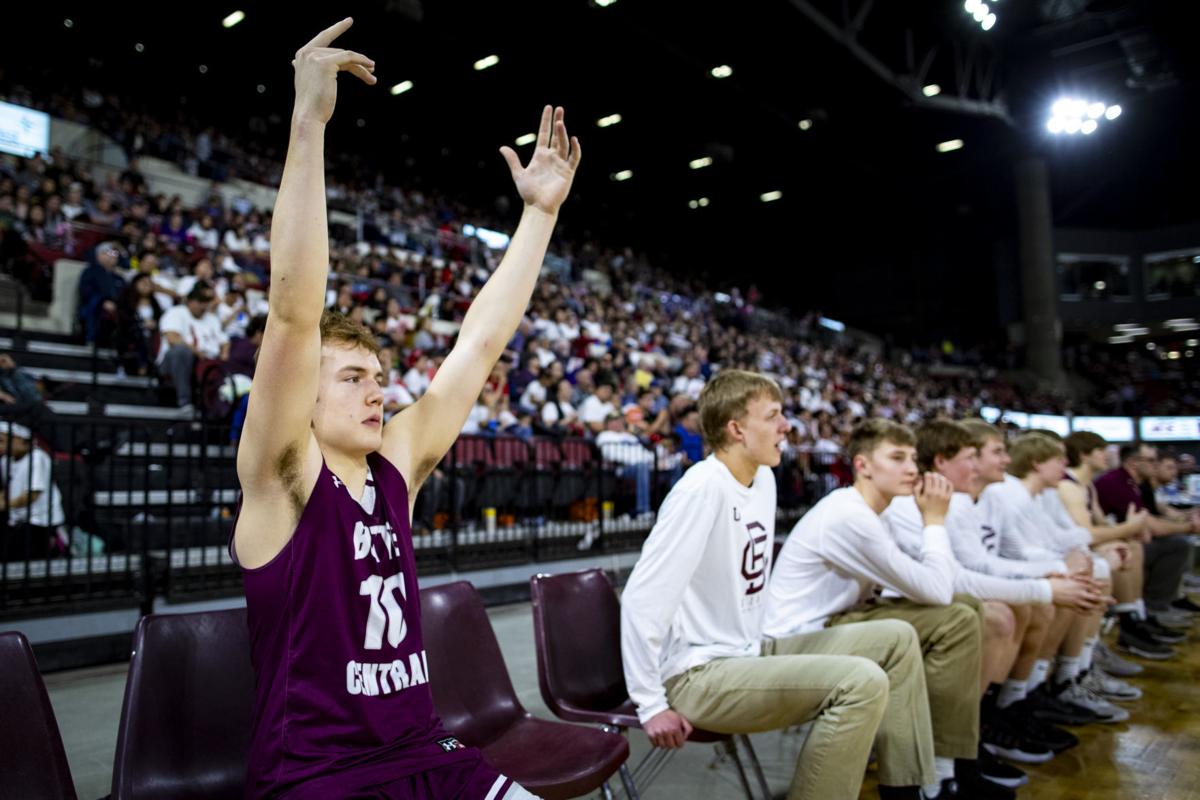 Butte Central's Braden Harrington (10) motions towards the Butte Central section during Maroons' game against Browning in the semifinal round of the Class A state tournament at First Interstate Arena at MetraPark on Friday, March 13, 2020.

BILLINGS — Famous Lefthand drove right, took one dribble between his legs, stepped back and fired a 3-pointer that streamed through the net to beat the third-quarter buzzer. It gave the Hardin boys basketball team a 58-31 lead over Livingston in Friday’s Class A state semifinal game at First Interstate Arena at MetraPark.

Lefthand looked at Hardin’s fan section and raised three fingers after his exclamatory shot. He took a few seconds to soak in the Bulldog bliss.

Famous Lefthand ended the quarter on fitting fashion with this step back 3. pic.twitter.com/icwxud8hhE

“Enjoying the moment and not taking that for granted,” he said, “because anything can be taken away.”

Lefthand reflected on that memory minutes after he learned his season had abruptly ended.

Late Friday night, the Montana High School Association canceled the high school basketball tournaments after news broke of Montana’s first presumptive cases of the novel coronavirus. The four positive tests of COVID-19, the disease caused by the virus, prompted the MHSA to end the basketball season with a day to go and crown co-champions in all four classifications. For the State A boys, that means Hardin shares the 2019-20 title with Butte Central, which beat Browning in Friday’s second semifinal game.

Lefthand and the rest of the Bulldogs learned the news around 9 p.m. Friday, right before the Hardin and Livingston girls were introduced for their State A semifinal game. Almost exactly two hours earlier, Gov. Steve Bullock announced the four presumptive COVID-19 cases.

The Metra public address announcer read a statement about 15 minutes after Bullock’s announcement. The PA’s script, using outdated information, caused spectators to break out into applause and cheers.

“After a conference call with the State Department of Health and Human Services at 4:30 p.m. today, there have been no confirmed cases of coronavirus in Montana,” the PA announcement read in part. “The management and staff of the First Interstate Arena are working very hard to keep the facility as clean as possible.

Around 6:30 p.m. (less than an hour before the Montana COVID-19 news broke), MHSA executive director Mark Beckman released a statement more or less identical to the Metra announcement. Beckman wrote, after a conference call with DPHHS at 4:30, that “the recommendation is not to cancel the state basketball tournaments. They are proceeding as scheduled.”

"The UHC recommends that organizers and sponsors of large gatherings, including events, fundraisers, concerts and the like, consider postponing those activities in an effort to reduce the public’s risk of exposure to germs," the UHC's press release said.

Before the cancellation, Montana was the only state holding high school sporting events without limiting attendance, per USA TODAY. Professional and college officials, including the NBA and NCAA, suspended or canceled their seasons/tournaments, mostly on Wednesday and Thursday. The NAIA women’s basketball championship, scheduled for next week at Metra, was canceled on Thursday.

Butte Central’s 66-50 semifinal win over Browning ended minutes before the COVID-19 news broke, so the Maroons still believed they would be playing for a title on Saturday.

“I think it’s something that’s weighed over everyone’s minds throughout,” Central coach Brodie Kelly said of the coronavirus shortly after the semifinal victory. “I respect the leadership of all these people running these tournaments at MHSA to kind of have the guts to stand up to some social pressures and think logically. We trust in the decisions that are made.

“I hope we play. These boys want it so bad. In whatever arena, whatever parameters we have, we just want to play the game.”

Sadness and anger wafted over the Hardin boys when they learned their season was over. Lefthand and Hardin coach Andrew Round Face wondered why the title game couldn’t be played without spectators. Round Face criticized the MHSA’s decision making, not just on Friday but for their actions (or inaction) before the tournament began.

“We should’ve had a protocol ahead of time,” Round Face said. “We knew this was coming. Everybody knew it was gonna show up sooner or later, and we all hoped it wouldn’t show up until after tomorrow.

“We should’ve thought ahead and made accommodations where we could’ve went without fans and just had the teams there. Even with us being one of the last states to get (COVID-19), we should’ve went off of what other people were doing or set up something different.”

The Bulldogs, ranked No. 1 in the 406mtsports.com rankings, improved to 23-0 with Friday’s 73-41 win over the Rangers, one of the few teams to challenge Hardin all season. Round Face intended “no disrespect to” No. 2 Butte Central (20-4), he said, but he didn’t “see anybody beating us” all season.

Hardin’s boys and girls teams huddled around center court and faced their fans after the top-ranked girls’ 64-40 semifinal (and co-championship) victory over Livingston late Friday. Men sang the Crow victory song behind them and fans chanted “undefeated” and “we’re No. 1.”

The chants were technically accurate. All Lefthand and his teammates did was cry.

“Being a co-champion is not anything to be proud of. I don’t want it,” Lefthand said. “Yeah, we got a 23-0 season, but it’s not the big picture that I wanted. I wanted to win state.”

The scene shortly after the Hardin-Livingston girls game ended. The tearful Hardin boys get a bittersweet co-championship sendoff. #MTscores pic.twitter.com/VJ7P0VywcB

Browning (17-5) led 20-14 after one quarter, and Indians senior Riley Spoonmaker drilled a 3-pointer to open the second quarter. Central not only erased the nine-point deficit, it finished the quarter on runs of 17-8 and 10-1 to take a 31-28 lead into the half.

A 12-2 run to end the third quarter put the Maroons up 12 going into the fourth. The final points of the third scored on a dunk from senior Jared Simkins.

“Sometimes, it just takes us a little time to figure out a team,” said Simkins, who finished with 12 points (5 of 7 from the field) and nine rebounds. “But once we get it figured out, stuff just clicks for us.”

Jared’s twin Matt Simkins, a Montana football commit, scored 20 points (5 of 8 from the field, 10 of 11 from the free-throw line) and grabbed eight rebounds. Fellow senior Braden Harrington added 14 points (6 of 9 from the field), and senior Trevor Neumann added 10 points (4 of 10).

Simkins leads BC with 12 points, including three on this and-1. pic.twitter.com/46kndLjtnd

For the third straight year, the Bulldogs advanced to the Class A boys basketball state championship game after handling Livingston (17-7) Friday at Metra.

McMinn scored Livingston’s only points during that stretch, a 16-2 run that gave the Bulldogs a 32-16 halftime lead.

A 26-15 third quarter all but sealed the win for Hardin.

“I had a bad first quarter, and then I came back in and just wanted to prove to myself that I could do better and help my team out," Good Luck said. "I knew we were gonna make a run."

The Bulldogs went 4-0 against Livingston this season. The first three ended 61-60 (on a Lefthand buzzer-beater), 70-60 and 67-33 at the Eastern A Divisional tournament.

"This is pretty much the same team I have from last year," Round Face said. "We're still extremely confident on everything. We know what it takes to get there."

Senior Brendon Johnson led Livingston with 14 points (5 of 12), junior Tristan Stenseth had 10 (8 of 10 from the free-throw line) and McMinn finished with nine points (3 of 9 on field goals) and eight boards.

Johnson, who averaged a Class A-best 26.7 points per game through the regular season, has scored 18 points combined in his last two games against the Bulldogs.

"We wanted them to beat us with their other four players. Brendon can beat anybody," Round Face said. "Our goal was only to hold him beneath his average. There's a reason he's the point leader in the state. He can flat-out shoot. We had to get him out of rhythm."

Wylee Schnetter led Laurel with 12 points (3 of 5 from the field, 6 of 6 from the free-throw line), fellow junior Nick Pasquarello scored 11 (4 of 8 from the field), junior Colter Bales had 10 points (3 of 9) and eight rebounds and junior Eli Aby recorded eight points (3 of 7) and a game-high 11 rebounds.

Fourth-ranked Frenchtown held off Polson in the consolation bracket.

Polson finished its season with a 13-11 record.

How has the coronavirus affected sports in the region? Here's the latest reporting

Hauser, who led the Wolves to the State B semifinals, will continue his basketball career in Montana.

Who do you think should be our March honorees?

The Spartans and Warriors spent Saturday on the bus grappling with the abrupt end to their basketball seasons. Their lives got crazier over the next three days.

Check out who made the 2C all-conference team.

State B boys: Lodge Grass and Fairfield try to figure out how to celebrate co-championship

After the state basketball tournaments ended on the semifinal rounds, co-champions were left unsure of how to celebrate.

Hardin's Trae Hugs raises his arms after the Bulldogs beat Livingston in the the Class A state semifinals at First Interstate Arena at MetraPark on Friday.

Hardin's Trae Hugs gets a hug from Livingston's Brendon Johnson, front, at First Interstate Arena at MetraPark on Friday, March 13, 2020.

Hardin's Cayden Redfield (24) sheds a tear as he hugs Hardin's head coach Andrew Round Face after the Hardin Bulldogs' game against the Livingston Rangers in the semifinal round of the Class A state tournament at First Interstate Arena in Billings on Friday, March 13, 2020.

Hardin boys basketball players and coaches pose for a picture at First Interstate Arena in Billings on Friday, March 13, 2020.

Hardin's Famous Lefthand (52) shoots during the Hardin Bulldogs' game against the Livingston Rangers in the semifinal round of the Class A state tournament at First Interstate Arena in Billings on Friday, March 13, 2020.

Butte Central's Braden Harrington (10) motions towards the Butte Central section during Maroons' game against Browning in the semifinal round of the Class A state tournament at First Interstate Arena at MetraPark on Friday, March 13, 2020.