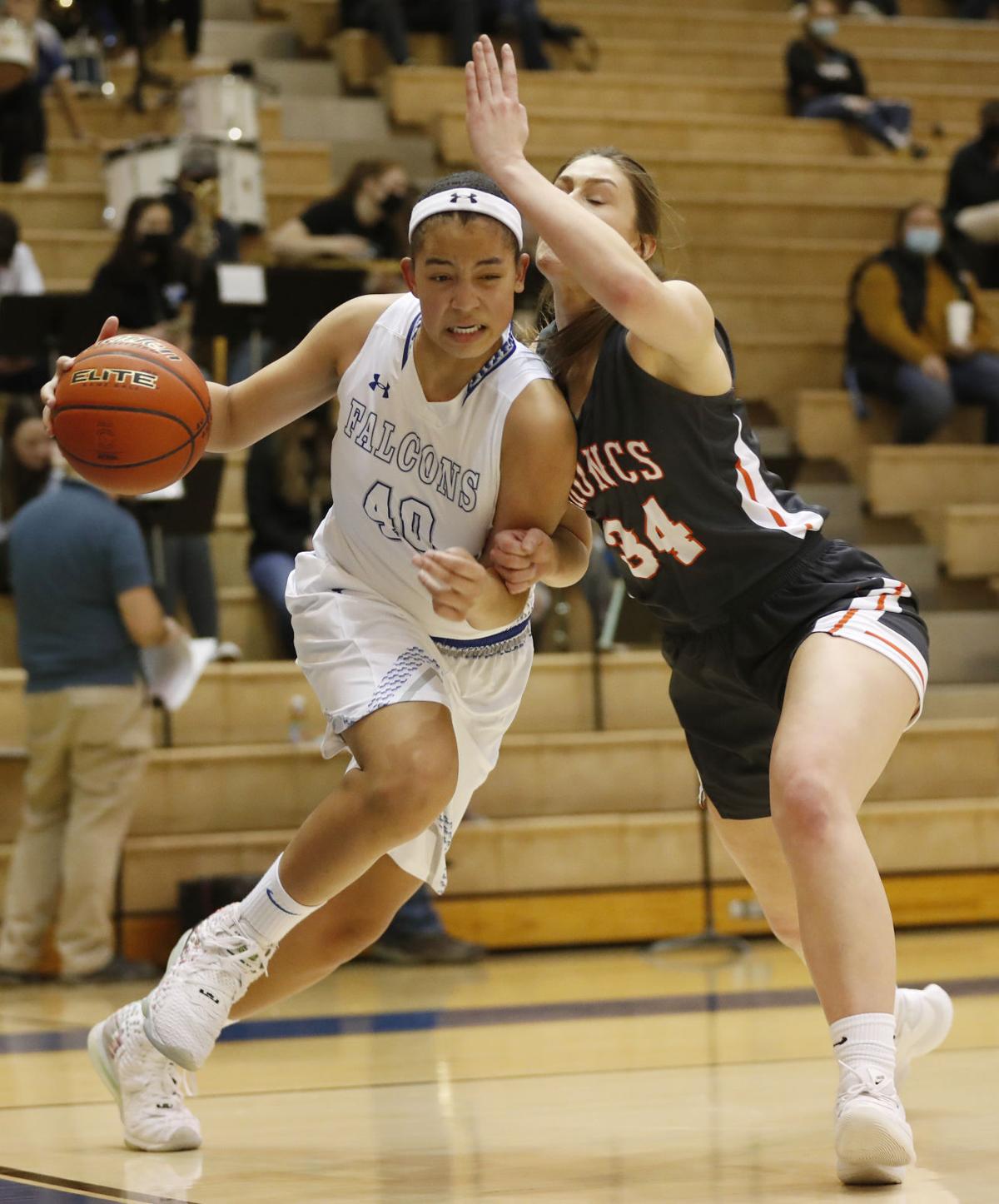 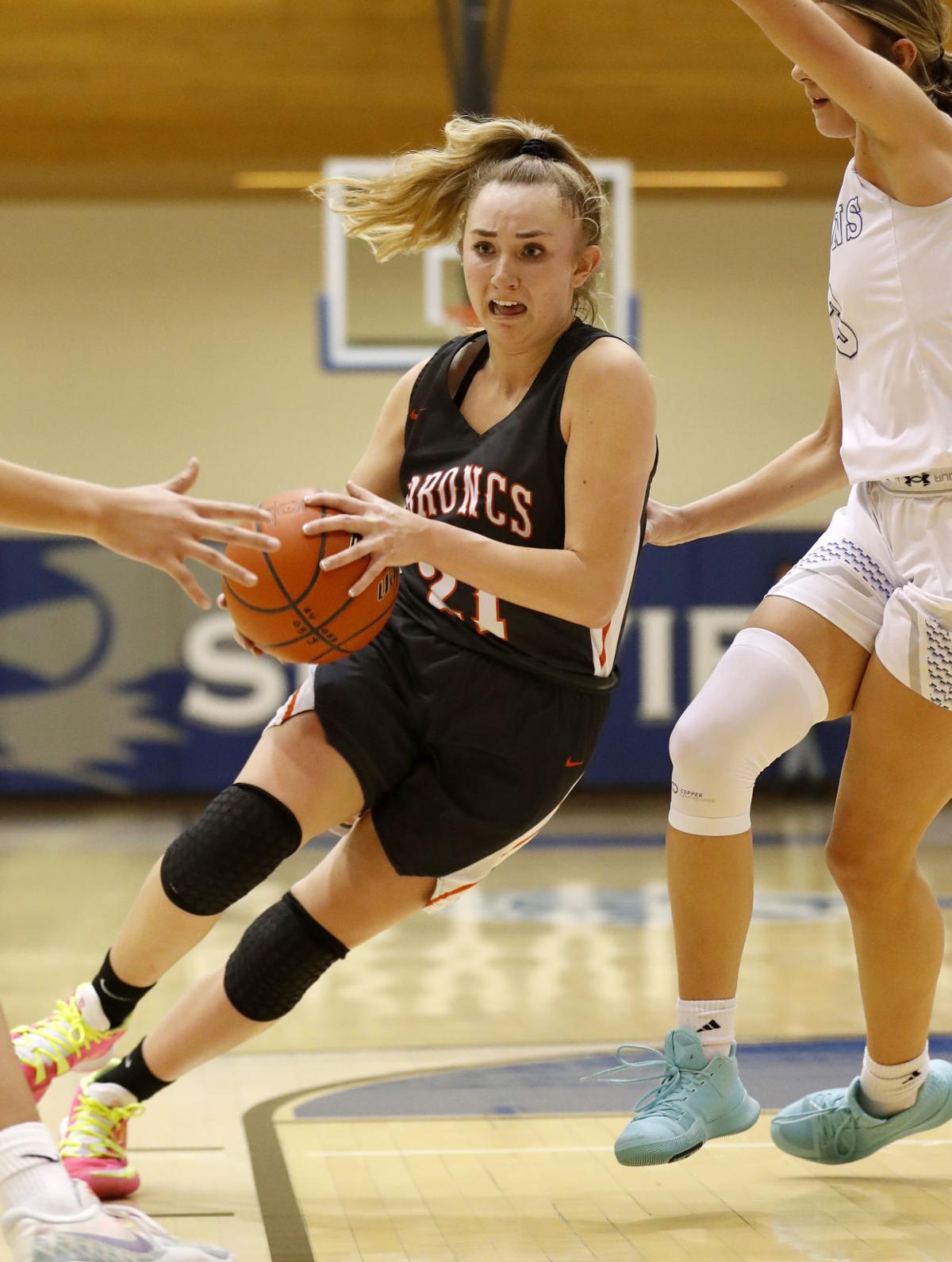 Billings Senior’s Allie Cummings splits the Billings Skyview defense on her way to the basket Friday at Skyview High School.

BILLINGS — The evolution of the Billings Skyview girls basketball program has several layers.

Among them, ending a lengthy state tournament drought last season, a defense that went from ranked 11th in a 15-team league last year to fourth out of 16 teams this year, and the development of Brooke Berry as a facilitator as opposed to simply a scorer.

Building on that theme is the continued emergence of 6-foot-2 freshman Breanna Williams, who led the Falcons with a career-high 23 points in in fourth-ranked Skyview’s 55-47 win over Billings Senior Friday night at the Skyview gym.

Williams ran the floor, picked off nine rebounds and generally seemed to always be in the right place at the right time to be on the receiving end of a couple of Berry’s six assists.

Yes, Brooke Berry leads AA in scoring but also assists (5.0 per). She gets another on a Breanna Williams bucket. At the end of three Skyview maintains a 46-41 lead. #mtscores pic.twitter.com/V8mX1lnZPE

“I trust her with the ball and with every single thing she does,” said Berry, who entered the game leading Class AA in scoring (18.8 ppg) and assists (5.0 apg). “I mean, she’s a very balanced player. She’s definitely learned how to play off me and we’ve developed that relationship to where she knows when I’m going to drive and exactly where to go where I’m going to find her.”

The Falcons, who improved to 8-3, find themselves tied for second in the Eastern AA with Bozeman. They’ve won seven of eight and earned their fourth consecutive win over the Broncs.

It was a smooth night offensively for Skyview, which also received 15 points from Berry and seven from MG Spotted Bear. But it also seemed like the Falcons could never shake Senior, which was still within four points with two minutes to go after a basket by Allie Cummings trimmed what had been a 10-point Skyview lead.

Nice first half for both offenses. Brooke Berry finds MG Spotted Bear for a 3 here. At the half, Skyview leads Senior 33-26. #mtscores pic.twitter.com/2dLcceQtyk

“Senior brought it, I mean, they just flat out brought it,” Skyview coach Brent Montague said. “I thought our girls did a really good job withstanding that, that wave after wave. We did some good things and found a way.”

The Broncs saw their three-game winning streak end despite 22 points from Cummings, who hit four 3-pointers. They slipped to 5-5 and two games behind Great Falls (with four to play) for fourth place and the chance to host a playoff game.

Allie Cummings opens the game with a 3 and @BSHBroncNation leads 14-13 after the first quarter. #mtscores pic.twitter.com/jqcthloMBx

Things won’t get any easier, either. Senior plays Saturday at home against third-ranked Billings West, which is unbeaten at 11-0.

Though his team never led after it was 14-13 to end the second quarter, Broncs coach Connor Silliker said he sees progression from his team.

“(The Falcons) had some extended runs that we had a hard time keeping up with, but I’m proud of my girls, honestly,” he said. “Allie Cummings had a hell of a game, she really did it on both ends of the floor and was a scrapper for us and made some big plays.

“I think we’re growing. If that game shows anything, it’s that we can compete with some of these upper echelon teams in the conference.”

The Mavericks, who haven't made state since 2015, are undefeated and No. 1 in Class C heading into divisionals.

Recapping all the action from the first day at the Class A girls state basketball tournament in Great Falls.

Billings Central and Havre each won in the semifinals Thursday, setting up a showdown of the last three Class A state champions Saturday in Great Falls.

Dominant second quarter lifts No. 6 Roy-Winifred girls to win over No. 9 North Star in challenge game

The defending State C co-champions will get a chance to repeat next week.

Billings Senior’s Allie Cummings splits the Billings Skyview defense on her way to the basket Friday at Skyview High School.