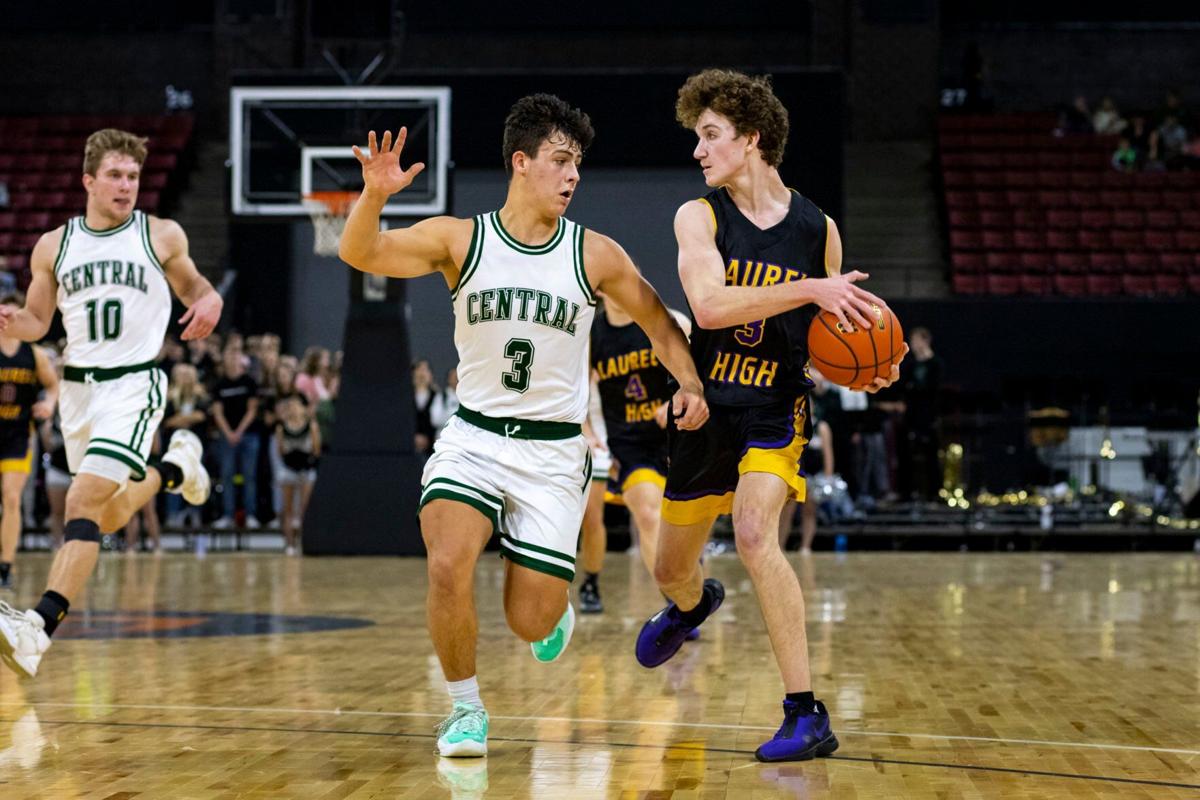 Laurel’s Kyson Moran is defended by Billings Central's J.J. Sanchez on Friday at First Interstate Arena at MetraPark. Moran's rebound and put-back as the horn sounded in overtime lifted the Locomotives to a 71-69 Class A boys basketball victory. 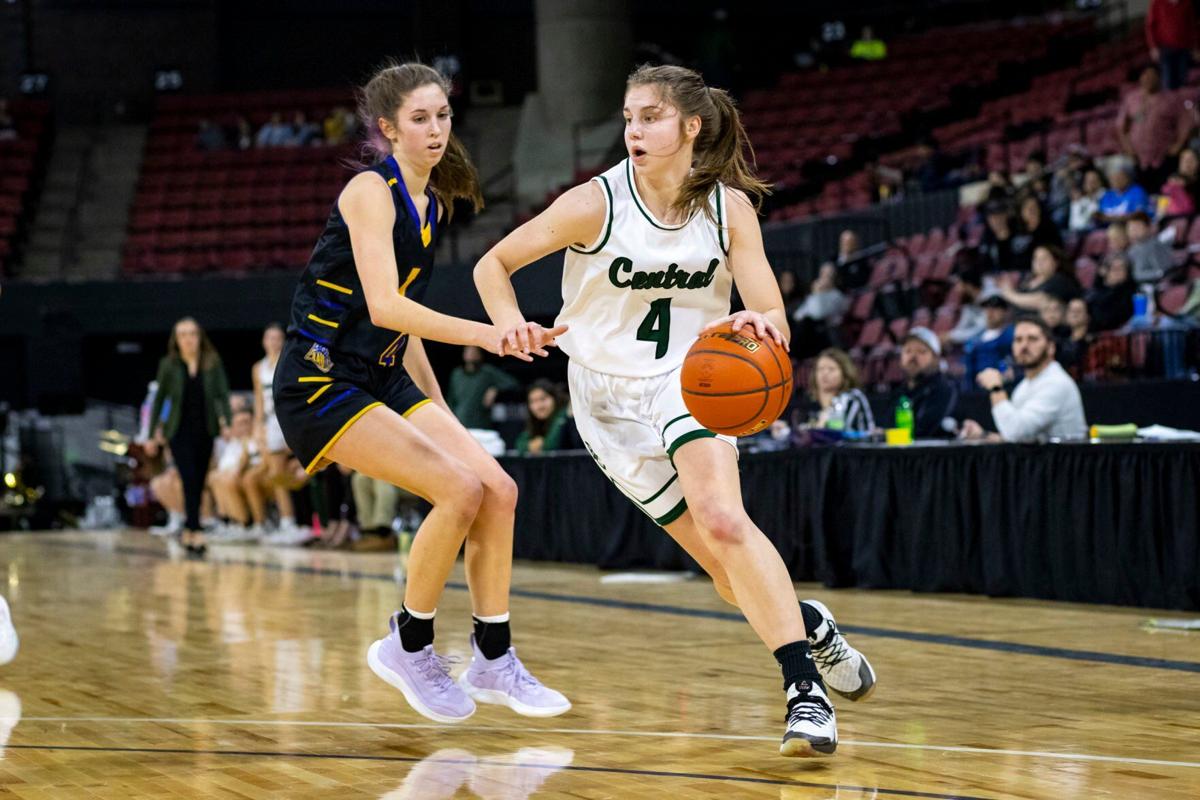 BILLINGS — Kyson Moran made a calculated decision in the final seconds Friday night. It ended up being the right decision.

Moran’s offensive rebound and put-back as the horn sounded in overtime gave the Locomotives a 71-69 win over longtime rival Billings Central in an Eastern A thriller at First Interstate Arena at MetraPark. The victory was Laurel’s sixth in a row.

It was the nightcap of a doubleheader between the cross-county schools. In the girls game, Mya Hansen and teammate Alaina Woods put up some eye-popping numbers for the shorthanded Rams in their 51-43 victory.

Kyson Moran’s offensive rebound and put-back at the buzzer in OT lifts Laurel to a 71-69 victory over rival Billings Central @406mtsports #mtscores pic.twitter.com/mC1asRoRL8

Central’s girls, ranked No. 3 in this week’s 406mtsports.com Class A rankings, improved their overall record to 7-2. The win was their fourth straight, and their sixth in a row over the Locomotives.

Laurel, which saw a four-game winning streak snapped, slipped to 5-3.

Laurel’s boys, unranked in the latest Class A poll, won for the sixth straight time this season and upped their overall mark to 6-2.

The Rams came in ranked No. 4 in the Class A boys poll. Their record dipped to 6-3.

With seconds ticking away in a tie game, Laurel’s Emmet Renner drove the lane in search of the go-ahead points. His shot attempt missed, but Moran was there to clean it up.

His put-back bounced on the rim a couple times but fell softly through the net just as time expired, sending the Locomotives into a frenzy.

As Moran explained it, he would typically have been in a different spot on the court during such a scenario, but he wanted the best chance to position himself for an offensive rebound if the situation arose. Good call.

“I just had a thought in my mind that I was going to go to the other side” of the floor, Moran said. “Emmet, I figured he’d go in, shoot the shot and if he happened to miss I’d put myself pre-position on the back side. I just happened to read it, the ball came right down to me and I jumped up and made a play.”

Truth be told, Laurel looked doomed earlier in overtime. Central began the extra period with a 3-pointer by Quentin McEvoy and a pair of free throws by A.J. Ulrichs to grab a 68-63 lead with 2:58 left.

But on consecutive possessions Moran executed a three-point play and Konnor Gregerson drilled a 3 of his own to put Laurel ahead 69-68.

Ulrichs tied the game 69-69 when he hit one of two foul shots with 29 seconds left after he stole the ball in the back court, but that only set the stage for Moran’s heroics. A couple turnovers and defensive lapses hurt Central.

“They made plays all game long. It seemed like they hit shots and got key offensive rebounds, and it was no different at the end,” Central coach Jim Stergar said. “I need to prepare our kids better defensively and make sure we’re on the same page. That’s just the way it goes.”

Gregerson led Laurel with 24 points and Moran finished with 14 points.

Central girls use a team effort

The aforementioned Hansen has viewed the girls rivalry between Central and Laurel through both lenses: She was with the Locomotives as a freshman before transferring to the Rams beginning in her sophomore year.

“It’s kind of cool to think I’ve been on both sides of it,” Hansen said. “The main point is you don’t want to lose. But both teams showed up ready to play, and those are the best kinds of rivalry games.”

As each team knows, it’s good to have Hansen in your huddle.

The senior scored a game-high 27 points, including nine in a row during a third-quarter stretch to help stake the Rams to a 32-21 advantage. Hansen took 22 field goal attempts and hit four 3-pointers, but she was by no means the entire show.

Central’s Alaina Woods, who stands 5-foot-10, pulled down a game-high 18 rebounds, including eight on the offensive glass. Woods’ effort helped the Rams dominate the boards, especially in the second quarter.

“I challenge her a lot,” Central coach Jetton Ailes said. “She’s so athletic. She came in tonight and really showed what she can do on the boards. It was a huge night for her and it was a big emphasis all week.”

Still, Laurel didn’t go quietly. On five occasions the Locomotives found themselves trailing by double-digits, but they continued to chip away. Laurel closed the third quarter on an 11-3 run to cut their deficit to three points entering the fourth.

Emma Timm and Alyse Aby were two big keys. Timm, a sophomore, finished with a team-high 17 points. Timm put together a solo eight-point run in the second to keep her team alive. Aby, a junior, finished the game with 14 points.

The Rams, playing without the injured Solei Elletson and also Lauren Dull, made more plays down the stretch. Hailey Euell hit two key shots in the fourth, and Jesse Larson contributed a key bucket in keeping with the theme that Central wasn’t a one-woman operation.

“We talk about playing both ends of the floor,” said first-year Laurel coach Buddy Windy Boy. “Sometimes we’d score and then we’d come back down and give up an easy basket and it would negate it.

“Basketball is a game of runs, and we just didn’t have a last run in us.”

'So many weapons': No. 1-ranked Lewistown boys keep winning – and dreaming big

The Eagles have a deep roster, a 10-0 record and legitimate aspirations for a long-awaited state title.

Laurel’s Kyson Moran is defended by Billings Central's J.J. Sanchez on Friday at First Interstate Arena at MetraPark. Moran's rebound and put-back as the horn sounded in overtime lifted the Locomotives to a 71-69 Class A boys basketball victory.