6-Man playoffs: Froid-Lake RedHawks shut out Power-Dutton-Brady for second-straight title
Share this
1 of 2 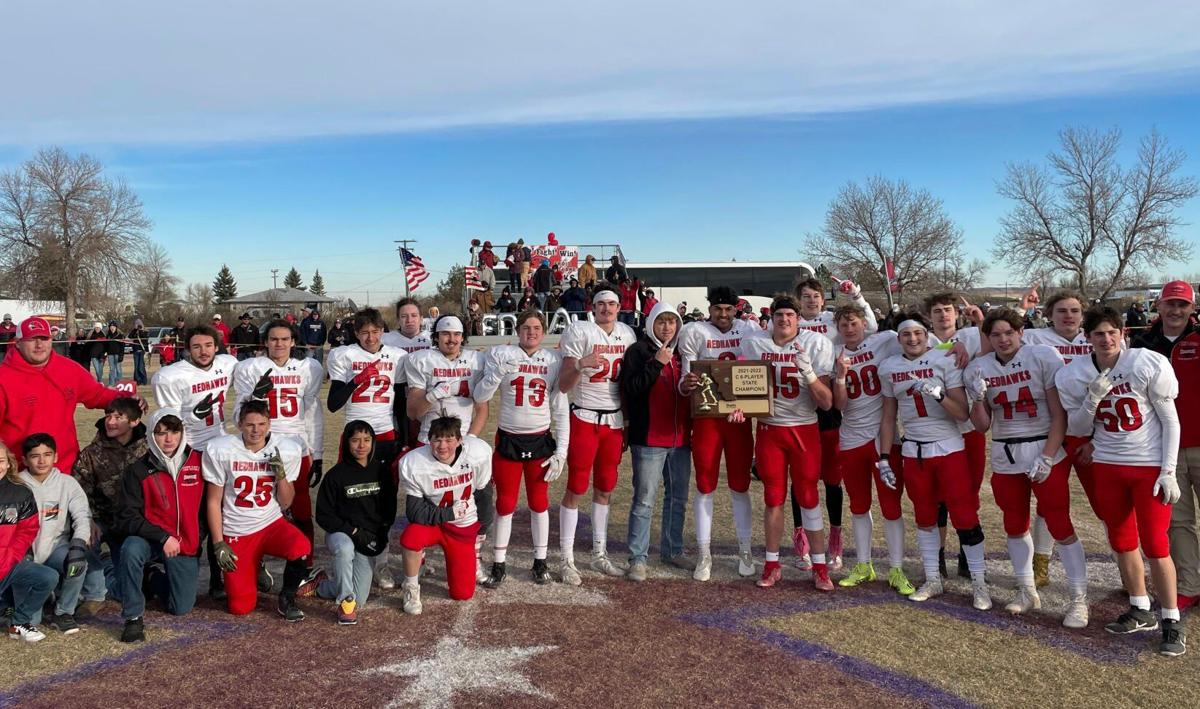 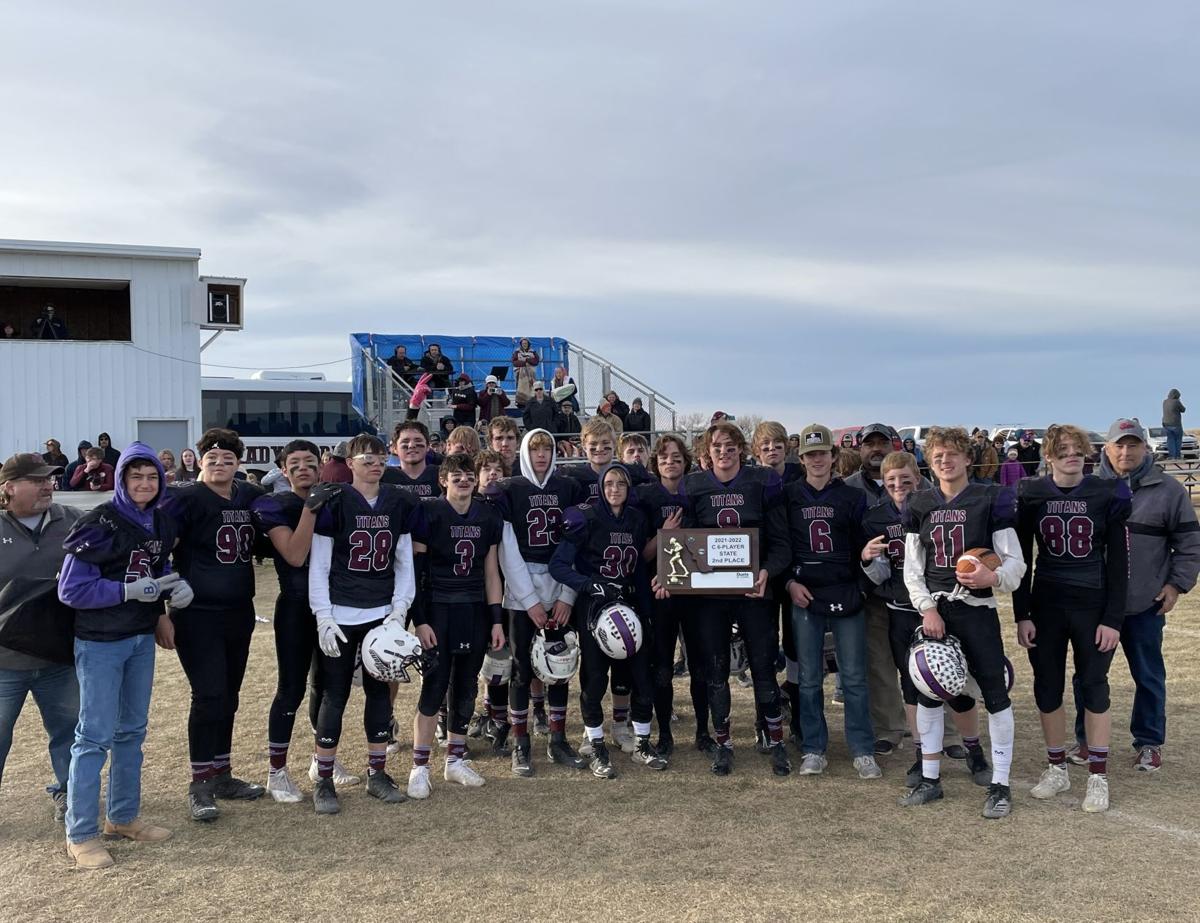 Power-Dutton-Brady will take home a second-place trophy after falling to the Froid-Lake RedHawks 43-0 in Saturday's 6-man State Championship game.

DUTTON — What is the perfect way to end an undefeated 13-0 season if you are the Froid-Lake RedHawks? How about with a 43-0 shutout of Power-Dutton-Brady in the 6-Man state championship football game on a breezy Saturday afternoon.

“Yes it is (the perfect ending),” RedHawks coach Michael Reiter said. “It’s a very good ending. The shutout — the defense played lights out. Jalen Hendrickson had a great plan for them. We executed it, we did well. Offensively, we brought that fire and that intensity. We’re tough to stop when we’ve got that intensity of being physical.”

The RedHawks displayed that physicality all afternoon, turning the Titans away drive-after-drive and forcing punts or turnovers on downs. Close enough to a shutout to smell it, Froid-Lake needed one final stop up big to keep the home score at zero.

Power-Dutton-Brady advanced the ball to the 12-yard line with 47 seconds left in the fourth quarter, but that is when Javonne Nesbit sprung into action, stripped a Titan ball-carrier near the goal line, and returned it 78 yards for a game-sealing, shutout-securing, championship-clinching touchdown.

“I stripped it out of his hands and just went for it...It was pretty awesome,” Nesbit said. “Ended [the game] on a good note for the team...I was going to come and just tackle him but then I got my arms on the ball and I ripped it out. The rest is history, I guess.

Brothers Ashdyn and Austen Hobbs each rushed for first-half touchdowns and Mason Dethman found Nesbit from 24 yards out to help give the RedHawks a commanding 29-0 halftime edge.

Power-Dutton-Brady netted negative six yards on the ground Saturday, but behind the Hobbs brothers, Froid-Lake topped 260 rushing yards on its way to 372 total yards of offense.

Ashdyn, a grade level older than Austen and playing in his final high school football game, opened the scoring with a 31-yard carry in the first quarter. Austen followed on the next RedHawks possession, breaking tackles for a 27-yard score and giving both brothers a touchdown in their last game together.

“I wouldn’t have thought we would have gotten here three years ago. That’s right before we won two (state titles). That’s crazy. I just want to thank my team for making it possible because this was not a one-man show, or a two-man show — this was everyone who played. It’s an amazing experience.”

Froid-Lake’s five seniors ended their playing careers on a 20-plus game winning streak. Ashdyn is one of those players and was described by his head coach as someone who works hard and gives his younger brother something of a role model to follow after next season.

Reiter said without his seniors and their commitment to the program, what the RedHawks accomplished Saturday and throughout this season would not have been possible.

“Validation of hard work is what it is,” Reiter said. “The seniors — they have the best work ethic. They hit that weight room and this shows it. They’re looking forward to the next season where they’re gonna be tough again.”

Dethman, a sophomore, added two interceptions to his pair of passing touchdowns. He said as the game progressed, Froid-Lake’s defense only wanted the shut out more and to show those in attendance what the unit is capable of, and that the six players on that side of the ball stepped up to the challenge.

“It feels awesome, amazing,” Dethman said. “A once-in-a-lifetime opportunity and we took advantage of it. We just had fun. We just played football and stuck together throughout the year.”

Power-Dutton-Brady ended a historic season with a second-place trophy and an 11-2 record, and played host to its first-ever state championship game. Both losses were to the RedHawks.

“Congratulations to the Froid-Medicine Lake RedHawks,” Titans head coach Tom Tranmer said. “They’re a class act, great team. Got a lot of athletes on that team and they were all focused. They came ready to play today. They really controlled today from start to finish, gotta give them all the credit in the world...

“The people here, they really just enjoyed the moment. Really proud of them with how they came together and got everything put together for this [game]. It was our first time ever. It meant a lot to the communities. Dutton especially since we hosted it here. There’s some really neat people here with a lotta good heart.”

While the Titans wanted more than a second-place trophy, especially in front of a home crowd, Tranmer said he could not be happier with the way his team came together to make a deep playoff run.

“The main thing is the six seniors that we’re graduating. They came together,” Tranmer said. “They had a couple teams before them that had some seniors that paved the way for these guys. These guys kinda took the torch, and they kept going on. They believed in themselves and really played well as a team all year long. I can’t be more proud of them.”

For the RedHawks, winning their first state title a year ago was big enough, but now having earned a second trophy in as many years, that’s historic and something will forever be logged in the record books. For the players, Saturday’s win was pay off for months of hard work.

“I’m just really happy that we got to go two times,” Austen Hobbs said. “It’s really historic for the [communities]. We had to come back and win it again. Off-season wins games. Our coaches made us go in the weight room every morning and we worked our butts off in the weight room and it showed.”

Power-Dutton-Brady will take home a second-place trophy after falling to the Froid-Lake RedHawks 43-0 in Saturday's 6-man State Championship game.