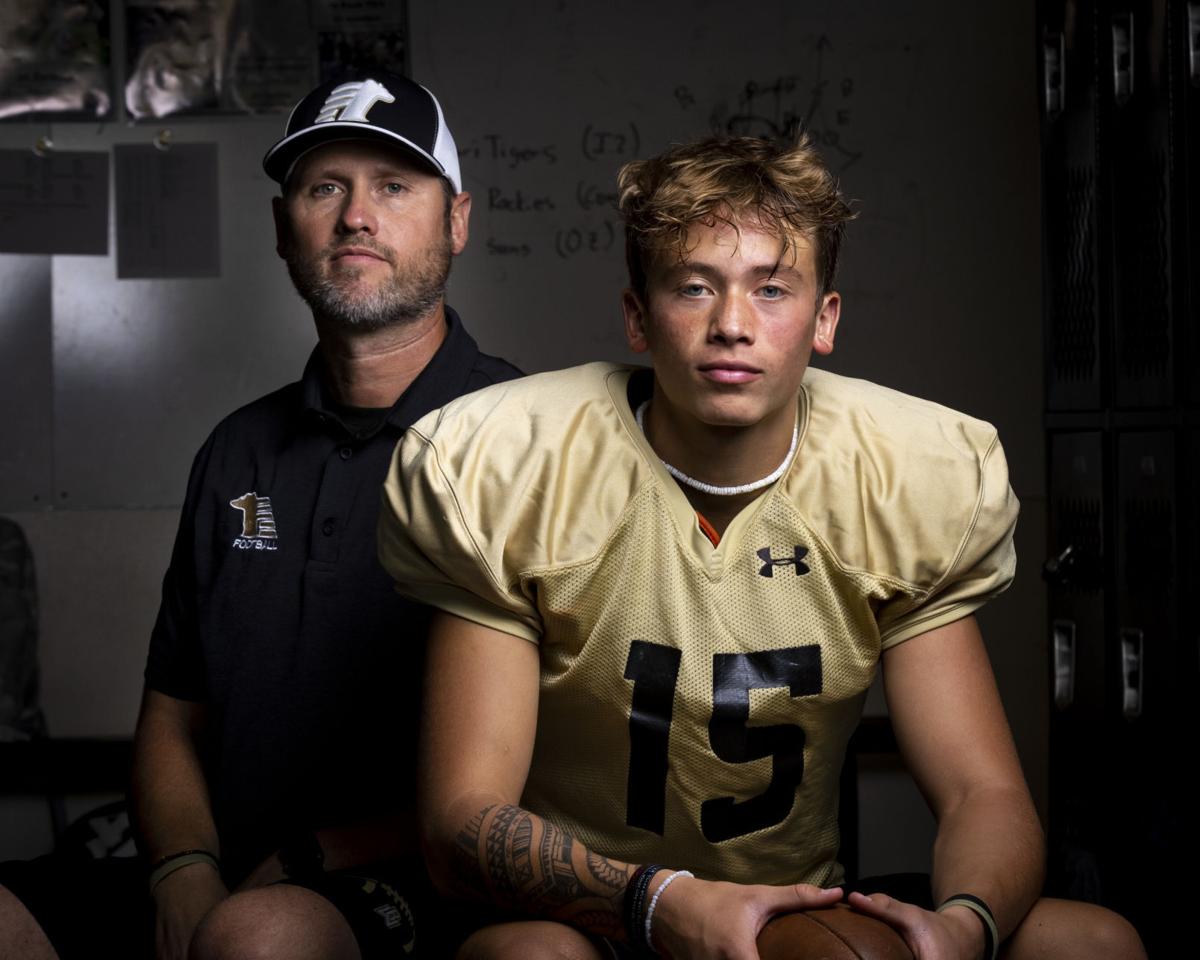 Kane Claunch, left, is in his fourth season as the Billings West offensive coordinator, while son Isaiah is in his second season as the Golden Bears' starting quarterback.

BILLINGS — Kane Claunch can’t help himself. He’s trying to be better, and believes he’s getting there.

Still, Claunch falls into what he calls “the trap.”

Get your arm up, he’ll say as father and son throw spirals back and forth to one another. Do this. Do that.

“Dad …,” will come the frustrated reply. “I’m just trying to have a catch.”

And so it goes between father (Kane) and son (Isaiah) as they navigate the waters of the parent-child, coach-player relationship. In this version, father is the offensive coordinator for the No. 2-ranked team in Class AA, while son is trying to be the quarterback leader the Billings West Golden Bears need if they want to win their first state championship since 2018.

While banding together to run the Bears’ offense is the time of their lives, it’s also splattered with moments of intensity. The football spigot is never off, even at home, even in the offseason. There’s always scheme to talk about, film to watch.

It doesn’t make things easier that Kane also was a very successful quarterback, at one time getting a tryout with the Buffalo Bills in 2003. And football lights his competitive fire as much as it ever has.

“To have the opportunity to coach your son, at any level, is wonderful,” Kane says as he and Isaiah were sitting in a locker room at West to discuss their relationship and their final season together. “Especially the position you played … that’s even better, and you have this grand (idea) that this is going to be the best thing since sliced bread.”

“But I’ve learned it’s definitely the opposite,” he continues. “It’s extremely hard. We’re in two different times of our lives. I see things (to correct) and bring it up to him but I’ve got to remember that he’s got all this other stuff going on in his life.”

The Claunches can joke that Isaiah didn’t have a choice but to be a quarterback. Kane was a standout signal-caller at Columbus and then went on to a stellar career at Montana Tech. From there, Kane had ambitions of playing professionally and had stints in the Arena Football League, including the AFL’s developmental league af2, and that NFL tryout.

Isaiah was born in San Diego in 2004 while Kane was with the city's af2 team, the Riptide. Father wasted little time putting a football in his son’s hands.

Isaiah was way too young to recall that first handoff from his father. But he’s never wanted to play any position other than quarterback.

Last season as a junior, Isaiah’s first as a starter, the Bears reached the Class AA title game as he completed 64% of his passes for 2,111 yards, 25 touchdowns and nine interceptions. The Bears, though, lost to Missoula Sentinel in the championship and, naturally, both Claunches want to take this year’s team one win further.

So they’ll watch endless hours of film. Kane will quiz Isaiah on the playbook, on reads, on how to make the correct decisions. When defense is the focus of a West practice, father and son will huddle and talk about the offense.

West coach Rob Stanton gives his assistant coaches a lot of autonomy. Kane first joined the staff seven years ago as a quarterbacks coach and is now in his fourth season as OC.

Starting with last season, Stanton said he’s seen a particular burden added to the coach-player relationship as both are determined to prove that Isaiah wasn’t just handed the job because of who he is, or who the OC is.

For that reason, and for the reason he knows if he makes Isaiah better he makes the team better, Kane admits he’s probably too hard on his son at times. Kane said a couple players came to him last year and told him he needed to ease off on the workload for Isaiah.

Isaiah’s mother, Naomi, has helped her husband take a few steps back from the football cliff, as well.

“She’s just like, ‘You’ve got to realize that’s your son, too. When you say things, he’ll take that differently than (previous West quarterbacks) Josh Erbacher or Bryson Deming would,’” Kane recounts. “And she’s right, so she’s helped me with that.”

Stanton brings up another layer to the dynamic. A head football coach needs to have a 30,000-foot perspective on the team. Assistant coaches have one specific skill set or group to look after, and that allows a coach to really tunnel in on the details.

“Offensive coordinator plus quarterback is … I don’t know what the word you’d use to describe it … it’s critiqued, it’s intense,” Stanton says. “(Kane and Isaiah) study immensely. Together, they have a very close bond and in practice sometimes that may be stressed.

“Being under the microscope, those guys have done a very good job of dealing with that and not letting outside influences, whether negative or positive, make their performances better or worse. They’ve been doing an excellent job with the last two years in the relationship. But it’s not as easy as you would think.”

Isaiah will break away soon enough. He participated in the Elite 11 regional quarterback camp in Los Angeles this summer and has made several campus visits, including FCS-level North Dakota, so college football is definitely in his future.

Spend 40 minutes talking to Kane and Isaiah, there are a few things that stand out. Despite all the football hours, it’s time they get to spend together, time that other parents and children might not get. Sure, Kane knows he’s intense and that he has to be better at letting Isaiah have time away from the game. But he also encourages Isaiah to talk openly and honestly about their relationship, and Kane absorbs any criticism that comes his way.

Father and son are asked if there will be a sense of relief when this season is over.

“I’ll definitely miss it, because it’s cool getting coached by my dad,” Isaiah says. “But then again, it’ll be nice, because I sometimes take coaching a little bit different from him, like I take him more personally. And so when I get coached by a different guy that’s not my dad it’ll be nice because I don’t have to take it as personal.”

“I agree 100% with him,” Kane follows. “I’m going to miss it with my son. It’s special. But I don’t think it will resonate with me until I get older and I see him mature and go off to do whatever he’s going to do and remember these times.

“Maybe you’re caught up in the whirlwind when it’s happening. But I just want to be able to help him. Any father, whether you’re coaching or not, you want the best for him and the best for your kids. You want them to be better than you. And, truth be told, I honestly think should he get to play at the next level, it’s going to be easier on him.”

At another point in the conversation, it’s clear that it’s not always the son seeking the approval in this relationship.

Isaiah says, yes, he is.

Maybe sooner than later, then, a catch will be just a catch.

Why are the Cowboys favored to win the divison?

MISSOULA — Missoula Sentinel High School has been placed on probation by the Montana High School Association.

Check out the latest rankings from 406mtsports.com.

Billings Senior rebounds from loss in a big way, shutting out Billings Skyview

Defense does it: No. 2 Laurel overcomes turnovers, pitches shutout of Eastern A rival Sidney

One of the Locomotives' many defensive philosophies, as coach Mike Ludwig explains it, is the following: No touchdowns after a sudden change.

Results from playoffs from around Montana.

Kane Claunch, left, is in his fourth season as the Billings West offensive coordinator, while son Isaiah is in his second season as the Golden Bears' starting quarterback.