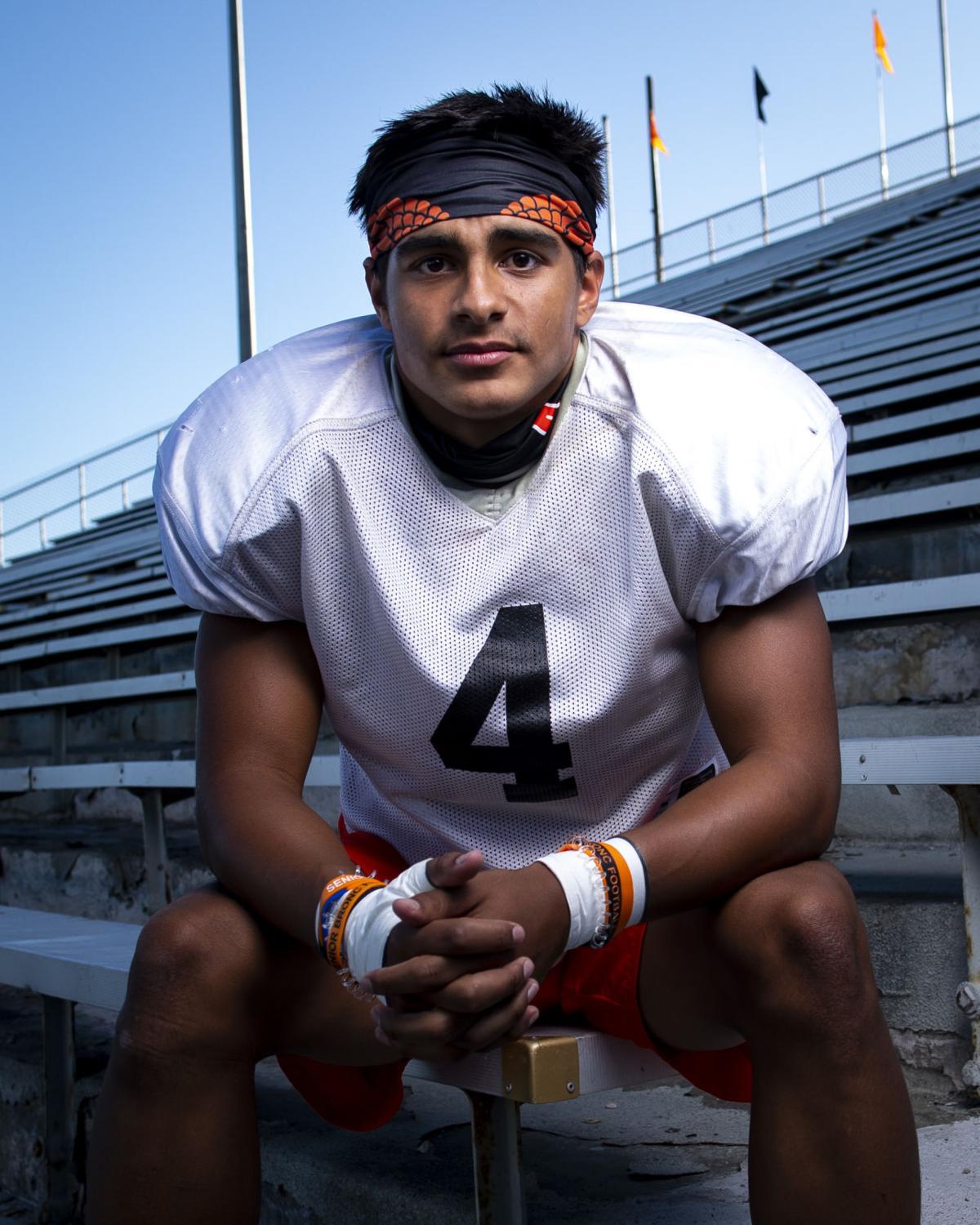 Billings Senior's Johnnie McClusky stars on the football field and is an honor student in the classroom. 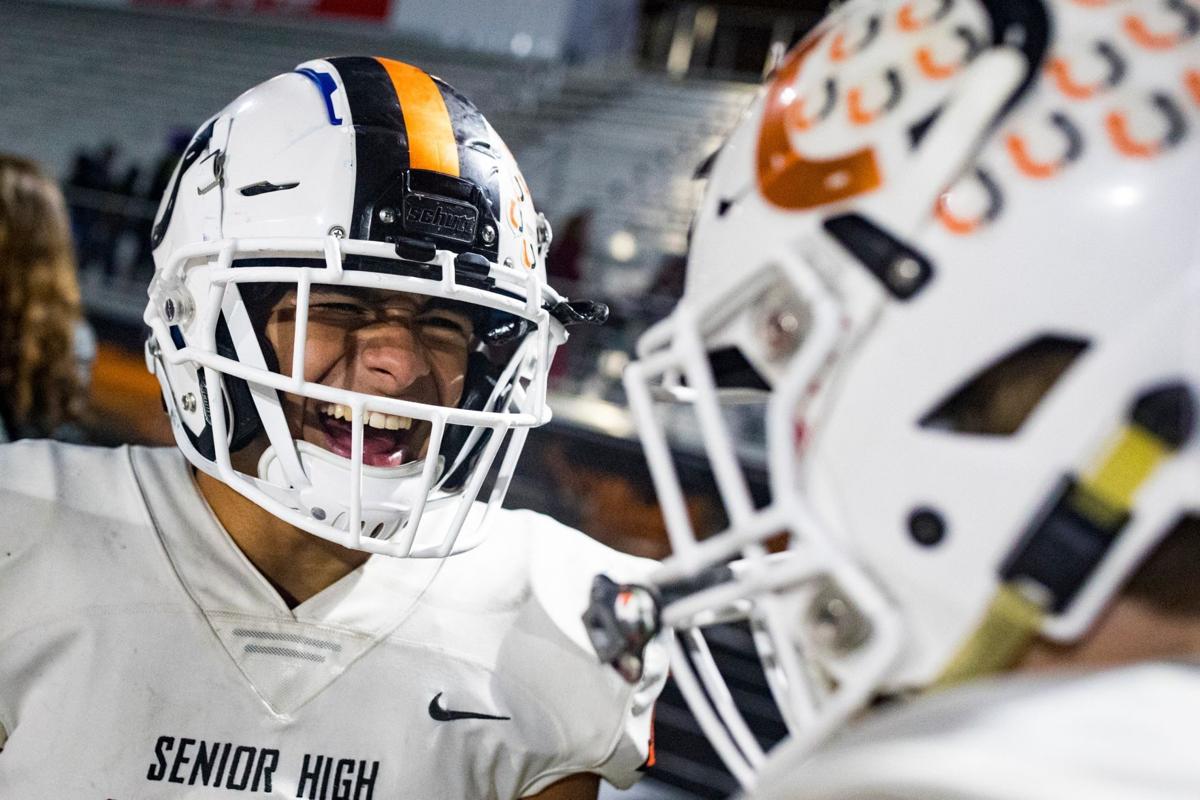 BILLINGS — Johnnie McClusky was a linebacker on the Billings Senior football team, a legend around the Broncs' part of the city in the 1990s.

Chris Murdock was a freshman by the time McClusky was a senior, and, like many aspiring Broncs, Murdock looked up to McClusky.

Years later, what do we have? Murdock, now the Broncs football coach, holds another Johnnie McClusky in high esteem. And if he doesn’t look up to McClusky Jr., Murdock certainly holds his starting senior safety up as a shining example.

“Johnnie really is, and he knows I mean this from the bottom of my heart, he really is the kind of kid you want to represent Senior Bronc football,” Murdock said late last week, after the Broncs wrapped up a practice in preparation for Thursday’s season opener against defending Class AA champion Bozeman. “He’s blue collar on the field, he’s blue collar in the classroom, and he treats his classmates and his school really well. He makes our school a better place to be.”

That’s all McClusky really wants to do, make his school a better place. Oh, and hit people.

Sure, that’s a dichotomy, but in McClusky’s world it’s all one and the same. If he sees a fellow student down in the dumps, he’ll try to brighten the day a little. He’ll ask what’s wrong, and what he can do to help.

That’s also a big part of why the honor student would like to go to medical school and become an anesthesiologist. He just likes to help.

“If someone comes up to me in the hallway and says hi, I say hi back,” McClusky said. “I’m a friendly guy. I just don’t like to turn people away.”

Except, of course, on the football field.

McClusky had what he considered his best season last year: 99 total tackles — 64 solo — and two interceptions.

Murdock and the Broncs coaching staff took notice. McClusky was awarded the revered uniform No. 2 for this season, the digit reserved for the team’s best defensive player. Murdock termed McClusky a “boundary player,” meaning he usually plays on the short side of the field. As such, opposing teams usually run plays to the other side, mainly because there is more space in which to operate.

But even when the play develops away from him, McClusky finds a way to get involved.

McClusky has been a starter since the first game of the season his sophomore year. Before that, he hadn’t played any varsity, instead spending his first year on the freshman team. Murdock, though, aware of McClusky’s physical and mental gifts, made him a starter the next season.

The promotion didn’t really hit McClusky until just before the opening game against Kalispell Glacier. He was too worried about learning his new role and responsibilities to dwell on the fact he was starting, he said.

But then came pregame, when starters are asked to stand up in the Senior locker room.

“I stood up and I was like, oh my goodness, I'm a starter for the defense,” McClusky remembered. “I couldn’t wait to get on that field.”

McClusky’s presence was felt right away. He was credited with a team-high 11 tackles, five of them solo, in the Broncs’ 27-26 win, and he hasn’t slowed since.

In fact, he’s adding offensive responsibilities this season. He’ll also be an H-back, or fullback, and though he might not get many chances to carry the football, McClusky is happy to get as many snaps as he can.

“I'm excited to not really come off the field," McClusky said with a laugh. "Honestly, I love to hit people. So, whatever it is, as long as I get to hit somebody I’m all right with it.”

And maybe when McClusky's done hitting them, his other instincts will take over and he'll help them up.

While some football teams have been playing for two weeks now, Class AA and Eastern A teams have been on the sidelines, impatiently waiting their turn. Concerns about the coronavirus pandemic led to the cancellation of nonconference games for area teams, but now they’re finally able to kick off their seasons.

Trust us, they’re all more than ready.

“Two weeks ago I was thinking we’d be one game into the season by now and then (last Friday) I was talking to (assistant coach Greg Walter) in the hallway and I was like, ‘Man, we’d be two games in right now,' "McClusky said. “Finally, to get to the first game, I’m just so excited.”

Bozeman (No. 2 Class AA) at Billings Senior (No. 4), 7 p.m., Wendy's Field at Daylis Stadium: It’s a good kick off to a new season, the defending Class AA state champions against a team that feels it can challenge for a title. Any success the Broncs figure to have offensively depends on dealing with Bozeman ball-hawk Kenneth Eiden IV. A Montana State recruit, the defensive end has 36.5 sacks the past two seasons, including 3.5 in last season’s championship win over Butte. Oh, yeah, he’s pretty good on the offensive side of the ball, too, catching eight touchdown passes and running for six more.

Billings West (No. 5 Class AA) at Billings Skyview, 7 p.m., Wendy's Field at Daylis Stadium: West graduated many seniors who made significant contributions to their 2018 state title team and last year’s semifinalist. But several underclassmen played key roles last year, so the Golden Bears shouldn’t be as far behind in the early going as a typical year that saw so many key losses. Skyview begins its third season under coach Nathan Wahl as the Falcons continue to try and find a way to turnaround their 0-20 drought.

Billings Central at Sidney, 7 p.m.: Billings Central introduced a lot of juniors and sophomores last season so they’ll take the field this year fully seasoned. Too strong for most teams, but not quite strong enough for the powerhouse teams, the Rams (7-3) had another playoff season last year. They were outscored 108-27 in their three losses, so they’re hoping that gap has closed. The Eagles were shut out three times last season and scored 63 total points, so getting their offense going would be a plus for the program.

Laurel (No. 3 Class A) at Havre, 7 p.m.: Laurel is a highly motivated bunch after falling short of its first state championship since 2002 with a 35-7 loss to Miles City in last year’s title game. The Locomotives, whose two losses last season were to Miles City, bring back starting quarterback Eli Aby, who has committed to play at Montana State, though as a defensive back. Meanwhile, lining up across from Aby will be Havre defensive end/outside linebacker Kellen Detrick, who has committed to Montana.

Glendive at No. 1 Miles City (No. 1 Class A): Miles City begins its Class A state title defense with a Northeast A home game. The Cowboys graduated many major players from their undefeated 2019 squad but return some top talent, most notably all-state quarterback Carson Hunter. The Red Devils went 3-6 last year and lost to Miles City 38-7 in the season opener.

Victor Flores of 406mtsports.com contributed to this report.

Roundup from football, volleyball, soccer, cross country and golf around Montana on Friday.

The Class A rankings feature a new No. 1 and No. 3. They will face each other this Friday.

Check out the final scores.

The Rams will likely play at Lockwood because Rocky Mountain College has a no-spectators policy for its facilities.

Check out the Saturday football, volleyball, soccer and cross country action from around the state.

With tremendous physical ability, Reynolds is one of MSU's latest small-town finds.

The Rams rolled in their home opener. It was Hardin's first football game of the season.

Billings Senior's Johnnie McClusky stars on the football field and is an honor student in the classroom.