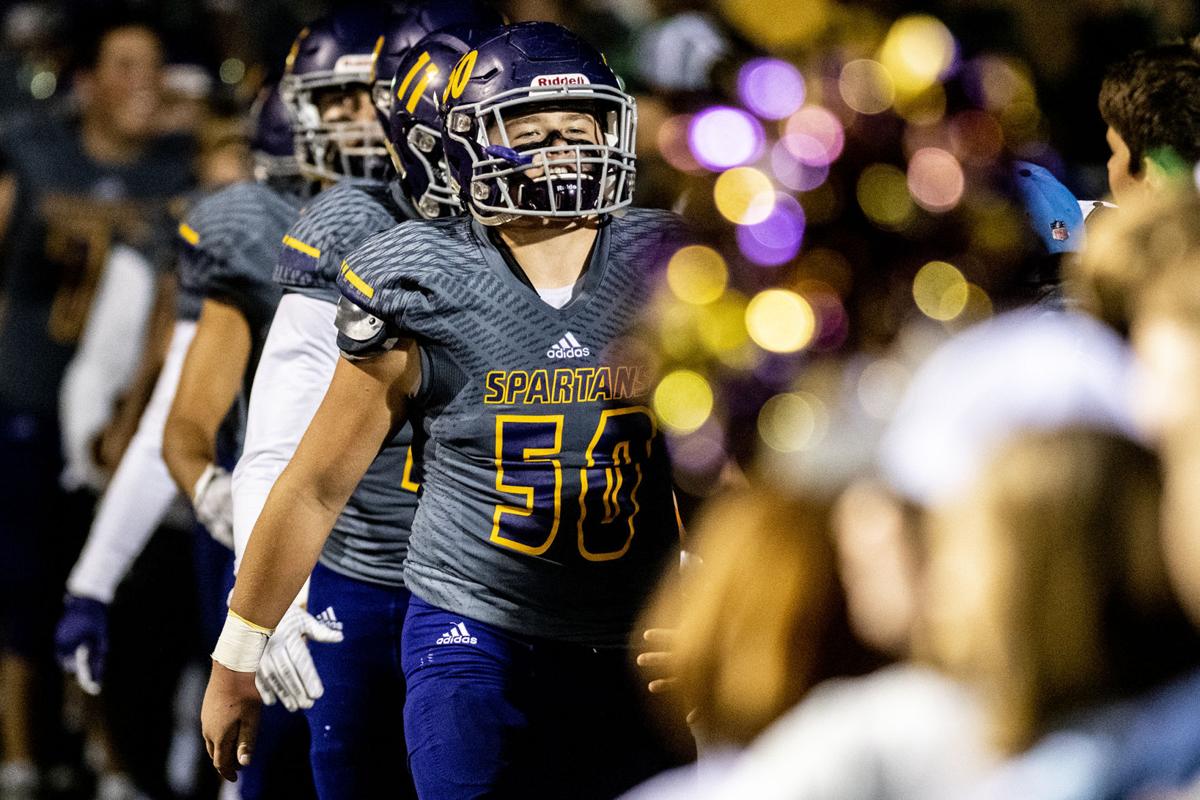 Sentinel's Geno Leonard (50) high fives fans as the Spartans take the field during a 2019 game Missoula County Stadium. Leonard is one of three Montana commits on Sentinel. 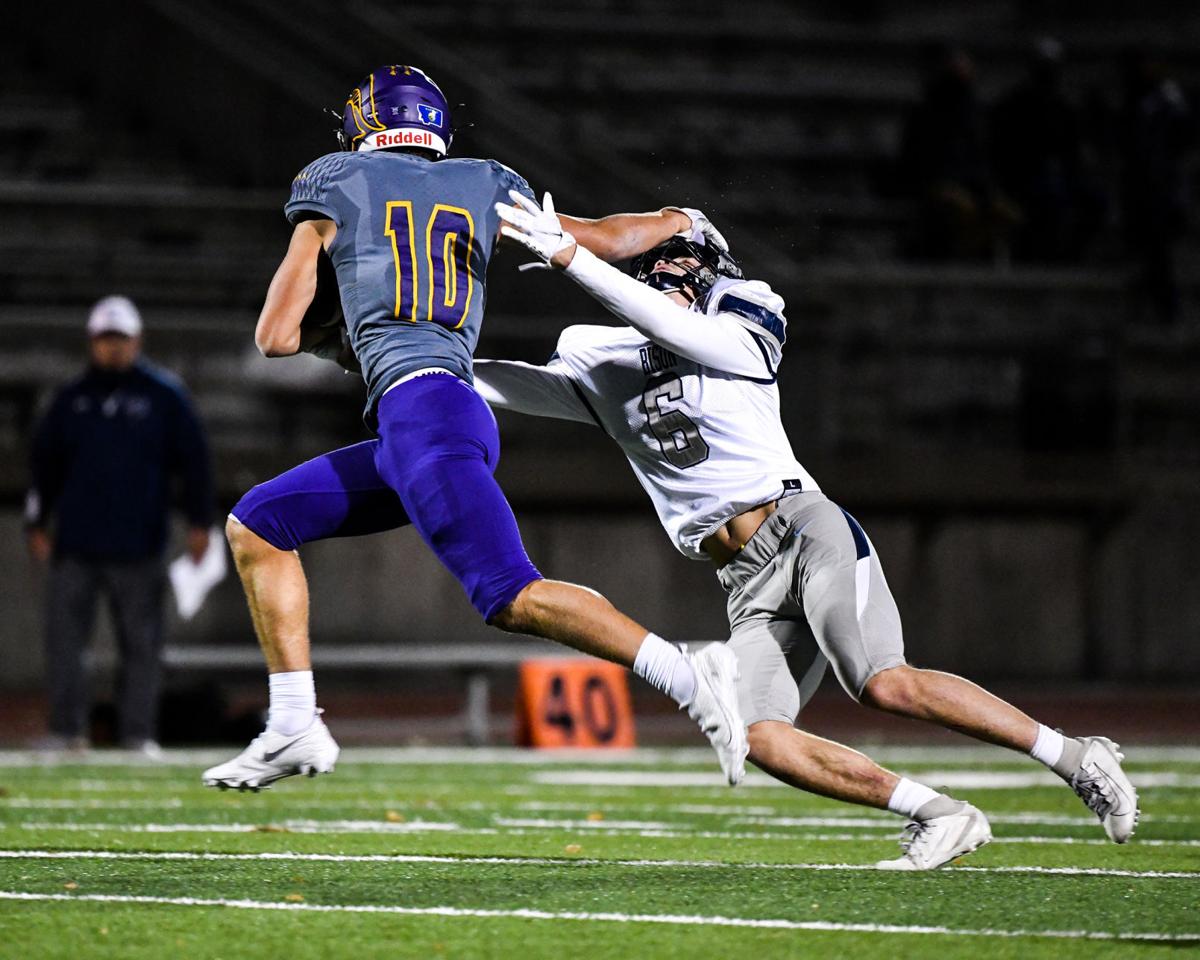 MISSOULA — There’s no Brawl of the Wild football game this weekend because of the pandemic, but there will be a battle between future Montana and Montana State players on the football field Friday night in the State AA championship game.

Missoula Sentinel’s Geno Leonard, TJ Rausch and Jace Klucewich are all heading to the Griz. Billings West’s Neil Daily and Paul Brott are both going to the Cats.

It’ll be the first of several times they will square off in the coming years. But this is the first and only time they are all facing each other at the high school level.

It is also the first time Daily will face his friends from Sentinel, where he played his freshman and sophomore seasons. He grew up in Missoula and played youth football and baseball with Leonard and Rausch, among others.

“Me and Neil, from preschool to sophomore year, we were in school together,” Leonard said. “He was two houses down from me. We were always playing football and basketball and getting in fights in the streets. He’s one of my best friends and always will be. I’m excited for the chance to play against him. And he’s playing for the Cats, so we’ll see him again.”

Not only will these players be on opposing teams, but they’ll be going head to head in some individual matchups.

Leonard, a center, may end up blocking Daily, a linebacker, and Brott, a defensive lineman. Daily may find himself having to track down and tackle Rausch and Klucewich, both receivers.

Conversely, Leonard, a linebacker, may end up tackling Daily, a receiver and tight end, or beating his block to get into the backfield. Rausch, a cornerback, and Klucewich, a safety, may also have to defend Daily in coverage and bring him down when he gets the ball.

“Me and Neil are still really good friends,” Rausch said. “We’ve known each other for a long time. He was on that 9U baseball team with me and Geno.”

Sentinel coach Dane Oliver, a former Griz receiver, coached Daily for two years before Daily’s family permanently moved to Billings, where his father worked. Daily was also on Sentinel’s 2018 state track and field championship team, running the second leg of the 400-meter relay team that took second place, tying for third in the high jump, and finishing sixth in the 200-meter dash and seventh in the 100.

Daily, also a basketball player, has continued to mature under West coach Rob Stanton to earn the opportunity to play Division I football. He wears the Golden Bears’ No. 4 jersey, which is reserved for the player who shows the most spirit and intensity.

“He was a long, lean kid and now he’s a long, thick kid, and his speed has improved,” Oliver said. “He’s always enjoyed the physical nature of football. He thrives going downhill. I know how intelligent of a kid he is as well. I think because he’s so smart he can play multiple linebacker positions. At receiver, he’s that vertical threat. I was totally supportive when he moved down there.”

There could also be some other future Griz and Cats players on the field. Sentinel senior offensive lineman Dylan Rollins has an offer from both programs, although he has multiple FBS offers. Then there's the possibility other seniors could get late offers or walk-on opportunities.

As for juniors, Sentinel's Zac Crews was offered by both UM and MSU in September. West juniors Taco Dowler and Caden Dowler were both offered by Montana State after the semifinal win. They both have played wide receiver, defensive back, kick returner and punt returner for West.

“Taco is a real challenge,” Oliver offered. “He goes from zero to 100 better than any high school kid I’ve ever seen. He has both speed and explosiveness.”

Check out the Northern 8-Man selections.

Check out the Eastern and Southern 8-Man selections.

Poplar is one of two Class B programs that will play in 8-Man beginning next season.

Check out the Eastern and Southern 8-Man selections.

Flint Creek's state championship on Saturday represented a storybook ending for coach Mike Cutler, his son Kade Cutler and many others on the team.

Sentinel's Geno Leonard (50) high fives fans as the Spartans take the field during a 2019 game Missoula County Stadium. Leonard is one of three Montana commits on Sentinel.