BILLINGS — Brenner Flaten grew up in Glasgow, excelled in sports there and, after college and seven years of teaching and coaching in Wyoming, returned to his hometown to guide the high school’s athletics and activities.

As a youngster, Flaten was enamored of the school’s and the town’s history, and when the all-grown-up Flaten returned, he embarked on a nearly seven-year project that culminated in www.scottiepride.com. The website details just about anything related to the Scotties, the high school's beloved — maybe even revered, in the eyes of Glasgow residents — mascot.

• Huskies was the school’s original nickname, starting in 1911. That lasted until 1928 when the Huskies became the Highlanders. The Scotties moniker didn’t show up until 1943.

• The school’s original colors of black and red — they are now red and white — were said to represent blood or death. “This was an excerpt from the school’s annual, the Prickly Pear, prior to 1910,” reads the website.

There is some unsettled school history, however. Nearly two weeks ago, Glasgow’s Scottie dog was voted Montana’s best helmet decal in a tournament that pitted 139 of the state’s football teams against one another on Twitter in a bracket competition conducted by Bozeman’s Gus O’Keefe.

In the end, the Scottie dog won out over the other finalist, the Chinook Sugarbeeters, by a 57.2% to 42.8% margin out of 1,106 votes cast. Overall, just under 60,000 votes were cast in the state tournament, which had modest goals in the beginning.

"I was expecting maybe 12,000 or 15,000 if things went really well," said O'Keefe, a Helena native who dabbles in sports uniform and logo design in his spare time. "To see Montana turn out the way they did has been really, really exciting."

Glasgow’s state title win leaves a nagging question, even for a self-proclaimed “Scottie junkie” like Flaten. Where did the Scottie dog originate?

“That’s one of those things we’ve been digging on for a while,” Flaten said. “Since this has been picking up steam we’re going to look to get to the bottom of its exact origin.”

The short version goes something like this: A high school student in the 1970s designed the Scottie dog with the bonnet; the logo found its way to the high school gym floor; and, in 1981, on to the football helmets. Now, a version of the Scottie dog logo appears in some fashion on every varsity uniform worn by a Glasgow athlete.

Even since 1981, however, there have been variations of the logo, at least on the football helmet. Flaten, who graduated from Glasgow High School in 2002, said from 2005-2008 the Scotties wore a red helmet with the University of Georgia “G” as the decal. Then, the school replaced one of the Gs and put the Scottie dog on the other side of the helmet, and that lasted two seasons.

But the red Scottie dog blended in too much with the red helmet, and in the fall of 2011 Glasgow returned to the white helmet with the Scottie dog, the look that won it all last month.

Colton Hill was among the group of Scottie football players who didn’t have the opportunity to sport the iconic look.

Instead, Hill and his teammates were the first to use the “G” helmet. It was in his senior season of 2008 that the Scottie dog returned, at least to half of the helmet.

When Hill and Miles Kittelson showed up for the first practice of the 2009 Knights of Columbus Badlands Bowl as Scotties representatives for the annual Montana vs. North Dakota all-star game, they were inundated with requests for their helmet decals.

It’s a tradition at all-star games for players to bring extra decals of their school logo, but Hill and Kittelson were unaware of that at the time. Hill remembers they might have had one extra decal, and the bidding was spirited.

“Everybody wanted the Scottie dog,” said Hill, who wound up being the defensive MVP of the game and now is the offensive coordinator for the Heart River Cougars, a cooperative of Belfield and South Heart in western North Dakota close to Dickinson, where Hill played his college ball. “We had kids from every school in the state begging and pleading for one of the two Scottie dogs that we had on our helmets. That just speaks volumes to what the logo is. Everybody still loves their own logo, but we had players from everywhere champing at the bit to get ours. It was a pretty cool feeling.”

Jason Thibault arrived in Glasgow with his family when he was a fourth-grader, and it didn’t take him long to get caught up in Scottie fever.

He became the starting quarterback for two seasons — 2013 and 2014 — and he went on to play at Dickinson State. Thibault emphasized the Scottie dog isn’t just a logo: There’s a Scottie dog statue outside the school, and inside the main entrance a depiction of a Scottie is inlaid in the hallway floor.

Glasgow students, administrators and residents know, Thibault said, you don’t step on the Scottie. In fact, when Flaten first returned to Glasgow High School as AD, he secretly videotaped students leaving the lunch room, and what you see in the video is plenty of feet side-stepping their cherished mascot.

“It’s a pretty cool thing to be in there and watch everyone walk around it like it’s some sacred thing,” said Thibault, who will begin a Master’s program at Montana State University Billings in health care administration this fall. “To us it kind of is.”

Scottie Nation will soon find out how sacred their mascot is to the rest of the country. As the Montana state winner, the Scottie dog will be up against the other top high school helmets in the country in a national tournament run on the @hshelmettourney Twitter account.

Combining all the state tournaments — 47 states have participated, and some are still wrapping up their competitions — more than 6,000 helmets have been entered, O'Keefe said. When the Montana tournament commenced, O'Keefe thought that Glasgow and Chinook would be the last two teams standing in Montana. Chinook advanced to a pool of at-large teams with the chance to be in the national tournament, as well.

"Glasgow and Chinook were such good finalists because they represent two different types of helmets," he said. "Chinook is just pure, you know, wildness that you'll never see at any level except for small-town high school football. But it's perfect for them. A killer logo.

"And Glasgow has this kind of refined history and uniqueness and playfulness to it. I think both are the best of both worlds in high school football that you could see. I was just pleased that that's what the finals ended up being."

The 64-helmet national tournament begins June 15, and Thibault, probably like all Scotties, is hopeful.

“I haven’t seen any of the winners from the other states but I still have to believe that ours is one of the best,” he said. “I’m definitely going to keep an eye on that and see if I can help by voting or getting some of my friends to vote.”

The state helmet tournament didn’t tell the Scottie faithful anything they didn’t already know. They’ve got one of the most original, most iconic looks around and soon a whole lot of other people will know that, too, whether someone in Washington or Oklahoma or Ohio or Maine votes for it or not.

Regardless of the final outcome, the Scottie dog is here to stay, just like it's been for 33 of the past 38 years.

“I can promise you it’s not going to go anywhere,” Flaten said. “At least that’s not anything I’ll ever do as AD here.” 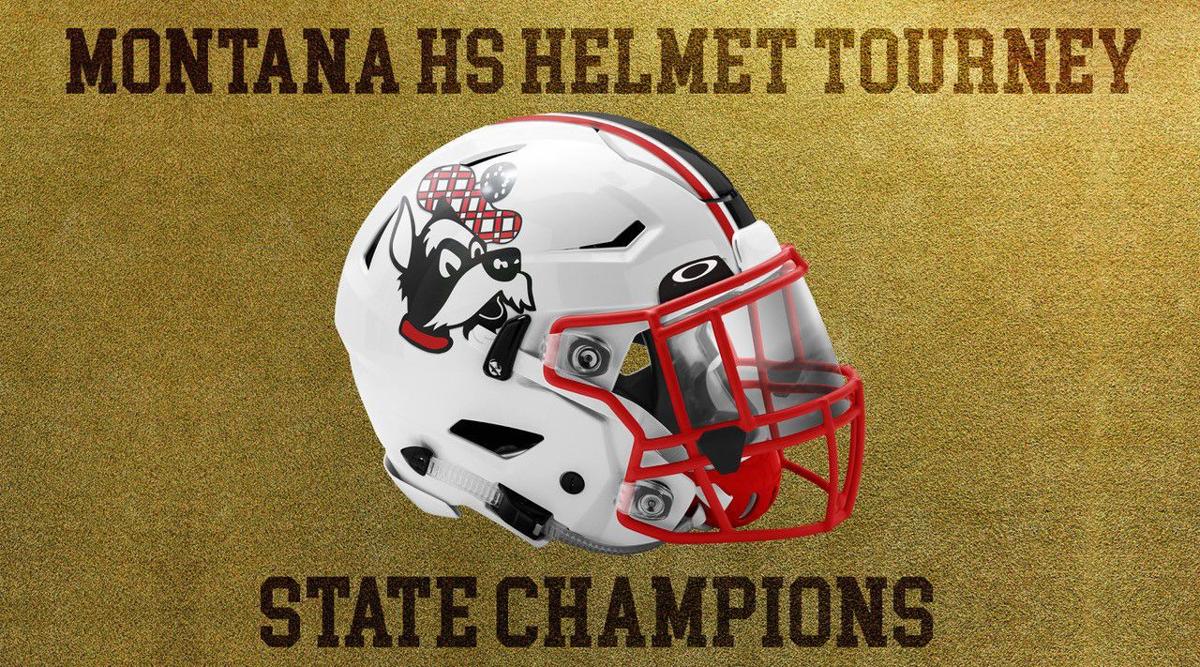 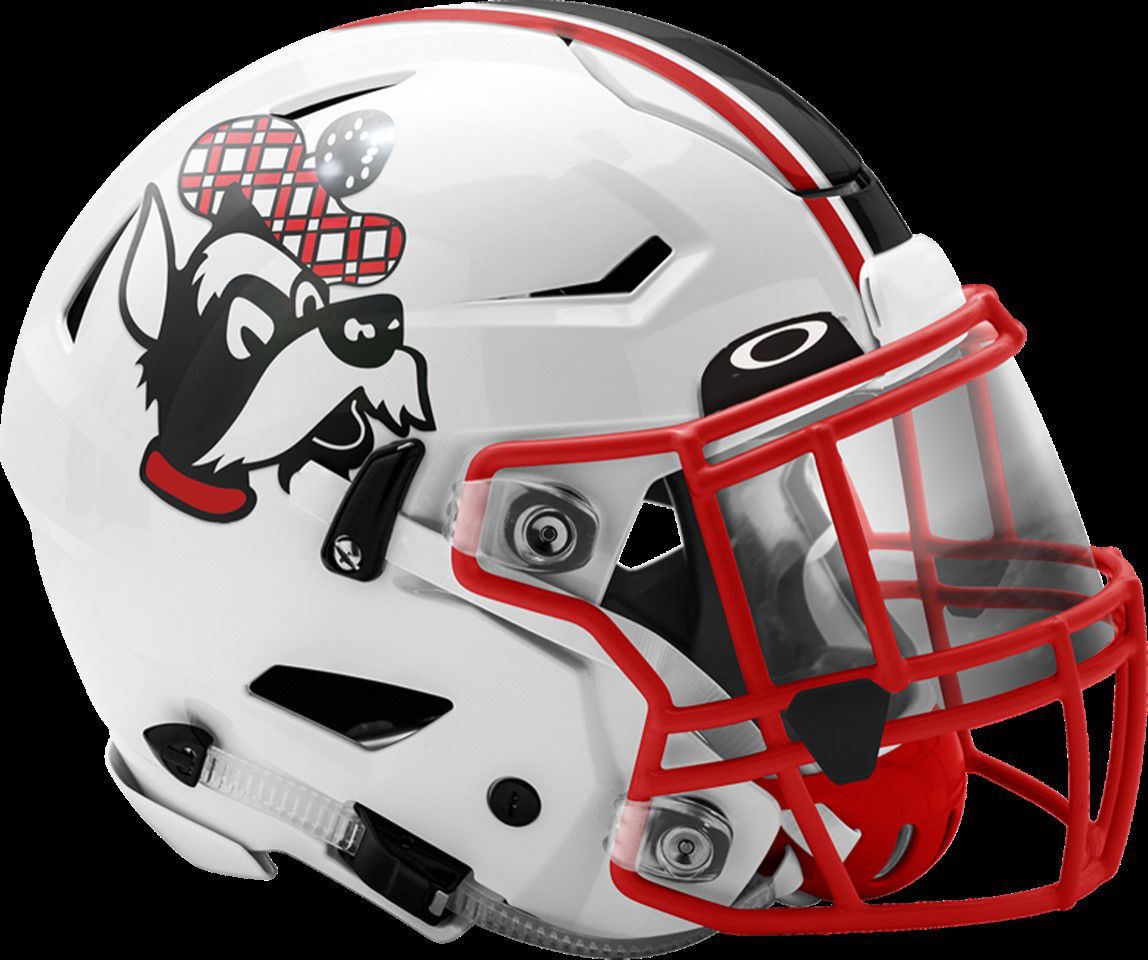 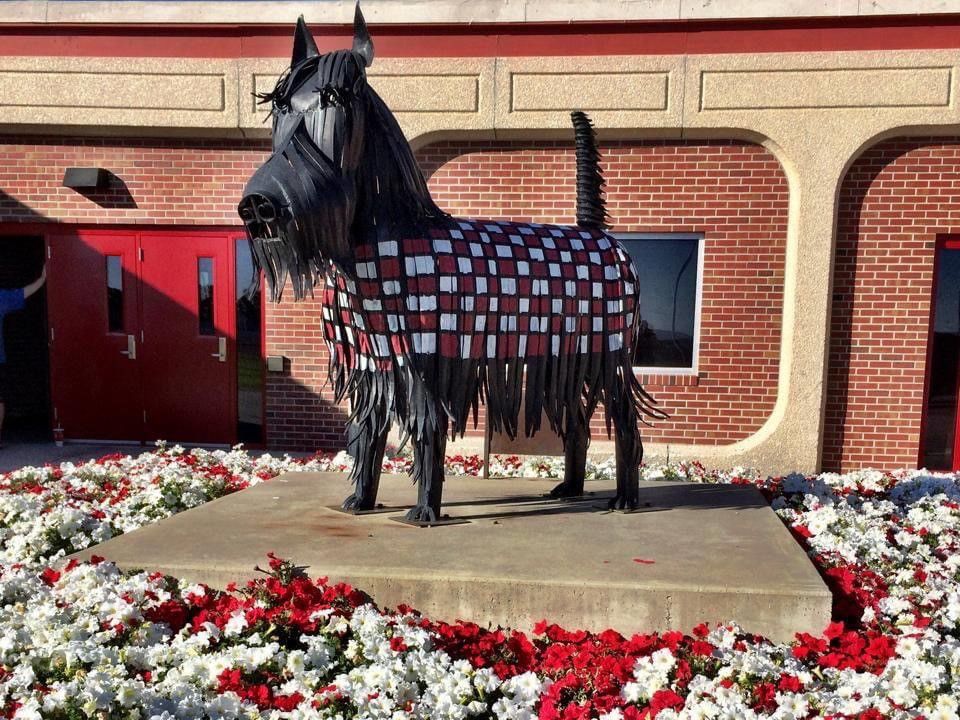 Glasgow's Scottie dog stands outside the high school. A coat is painted on the dog each year for homecoming. 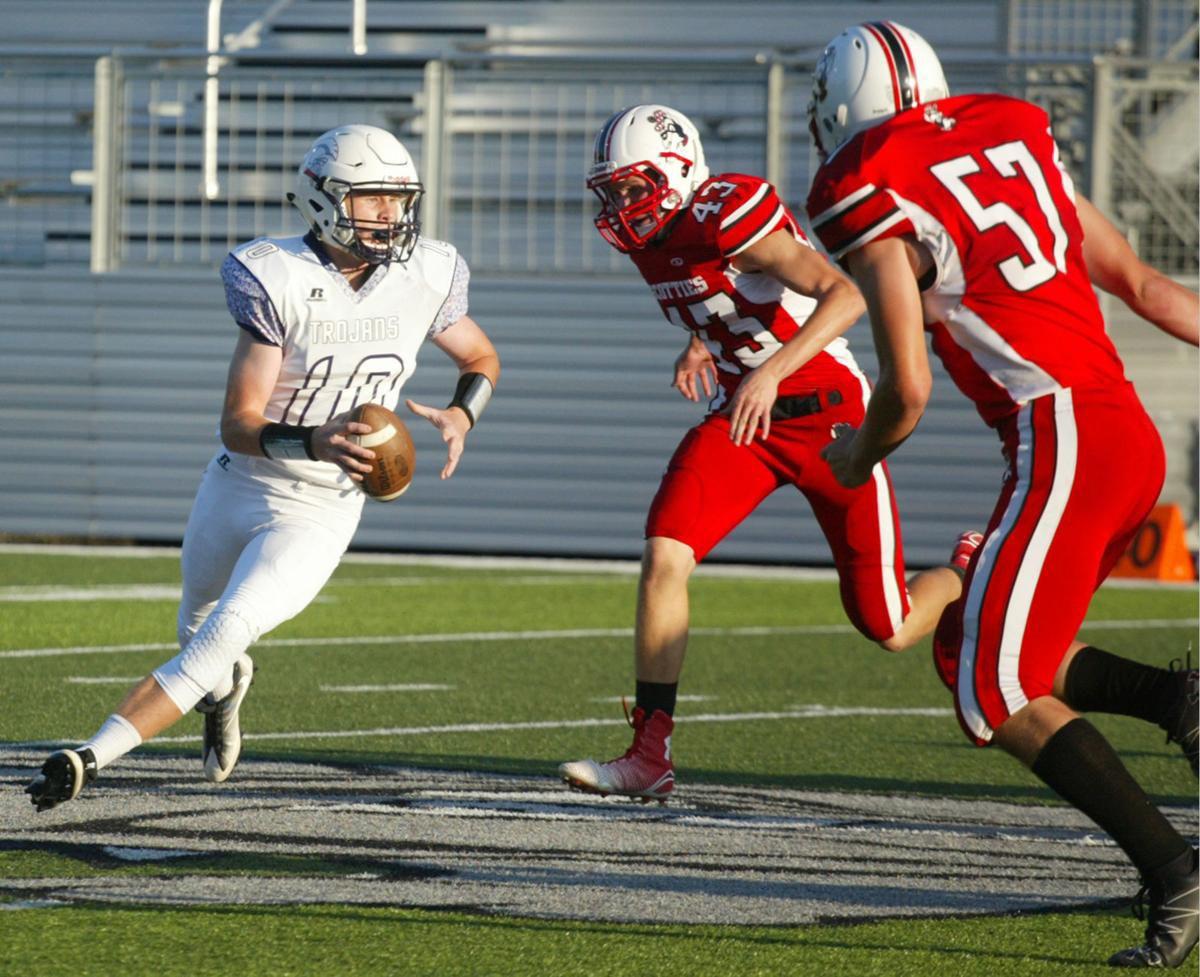 Pictured here in 2017, both the Glasgow jersey and helmets feature the Scottie dog. 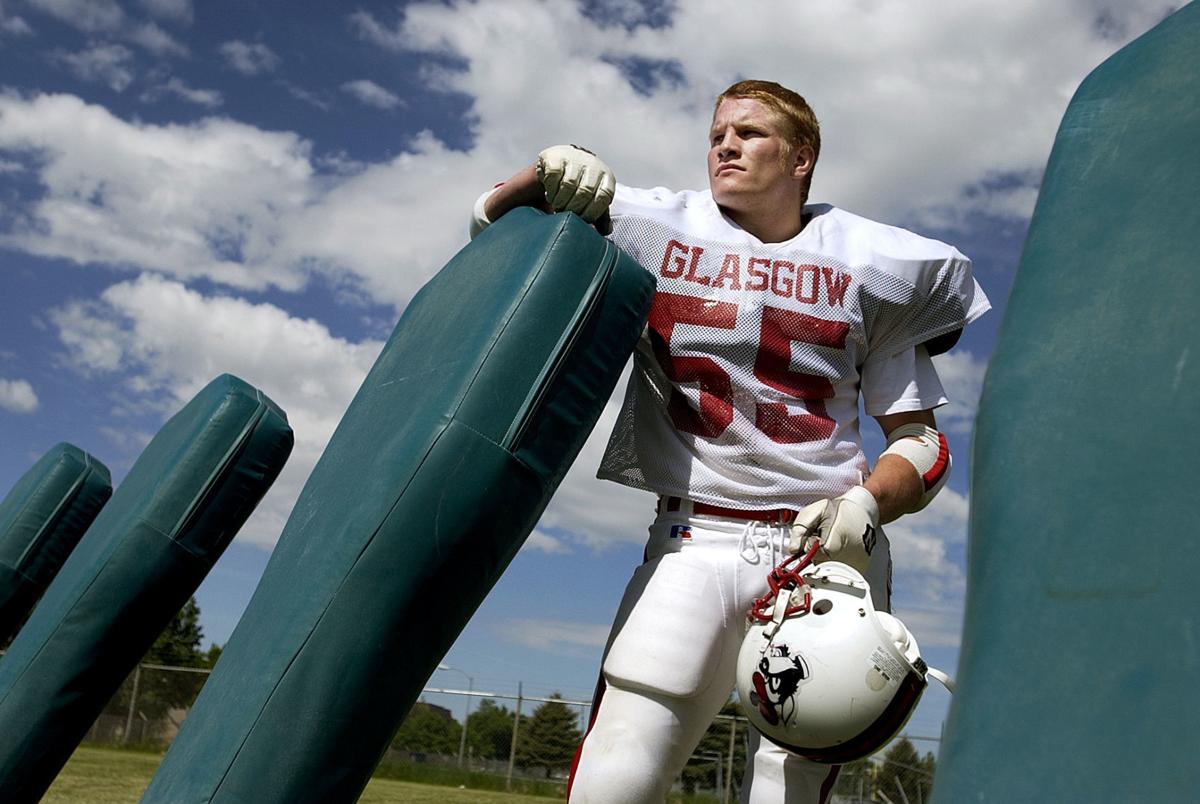 Glasgow activities director Brenner Flaten was a standout football player and wrestler for the Scotties and is pictured during the week of the Class B All-Star Football Game in 2002. Flaten is holding the iconic Scotties helmet in the picture. 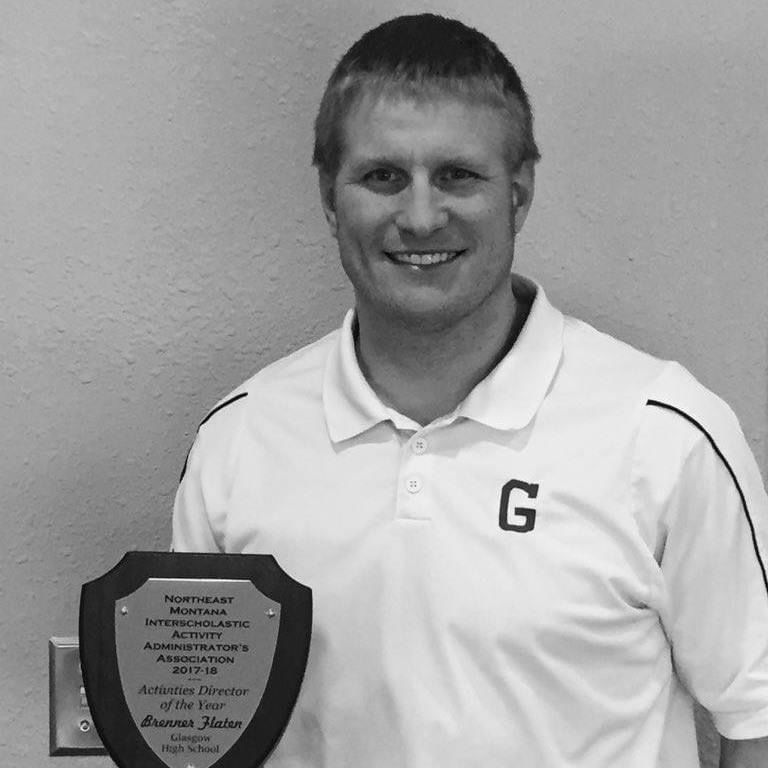 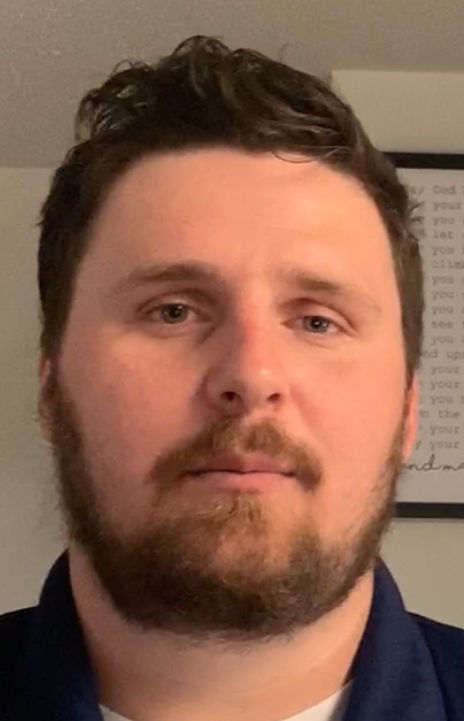 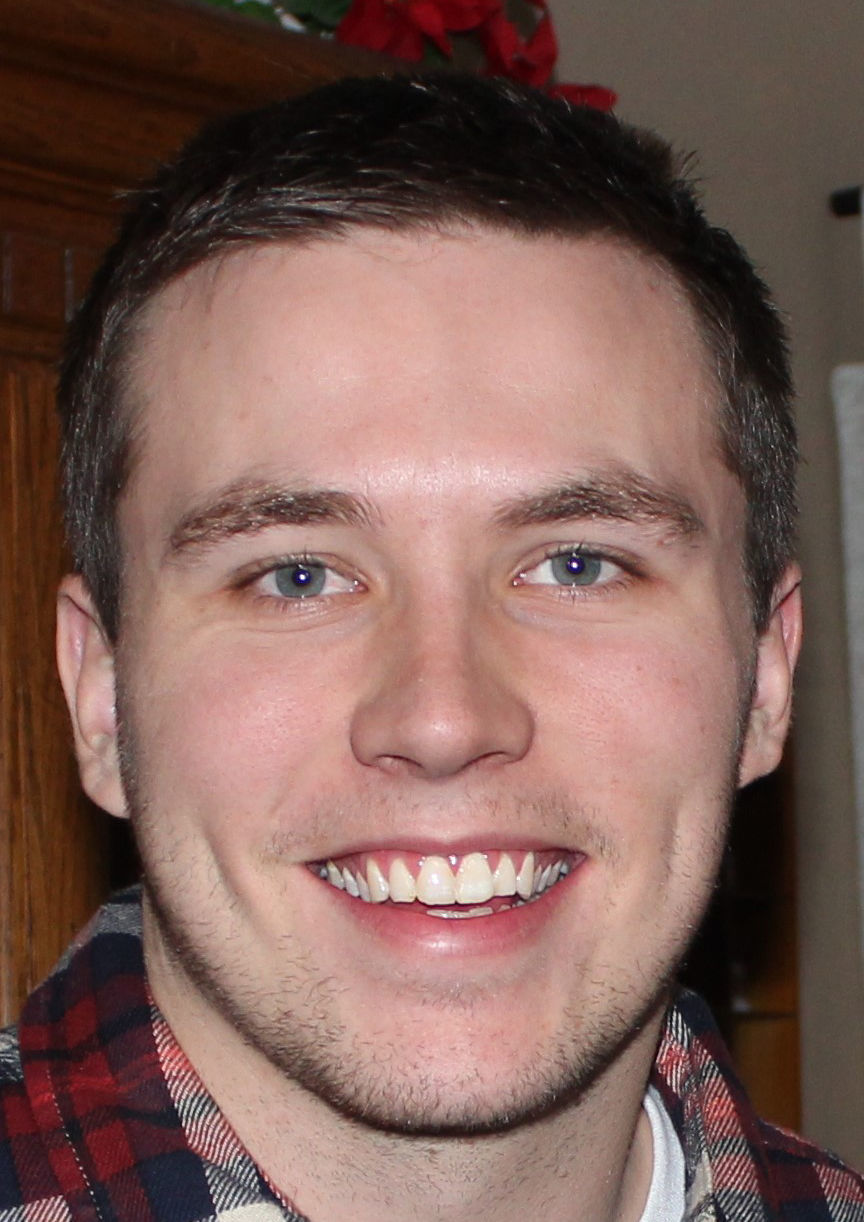