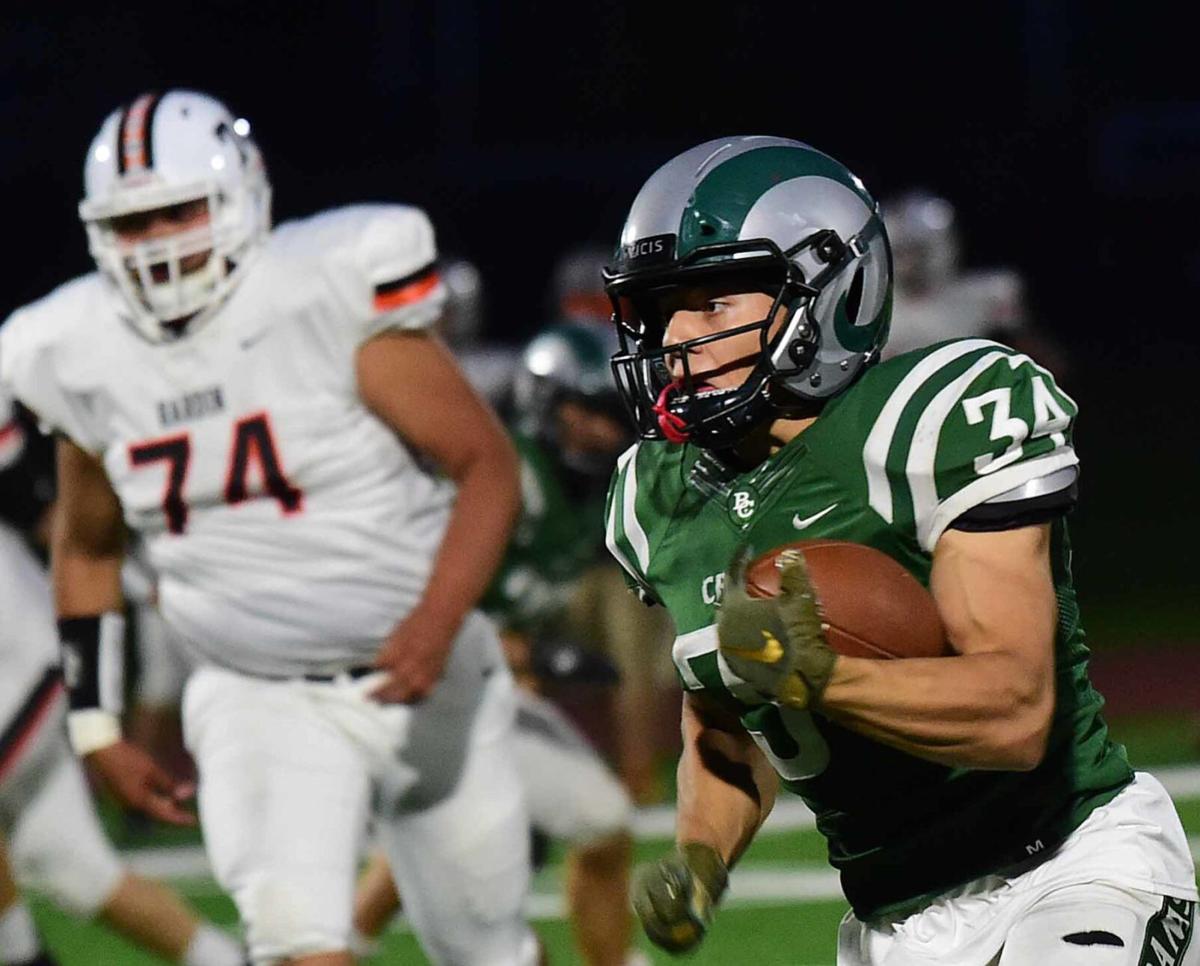 Billings Central's Brock Ping runs the ball against Hardin in Class A football at the new Lockwood High School field on Friday night. 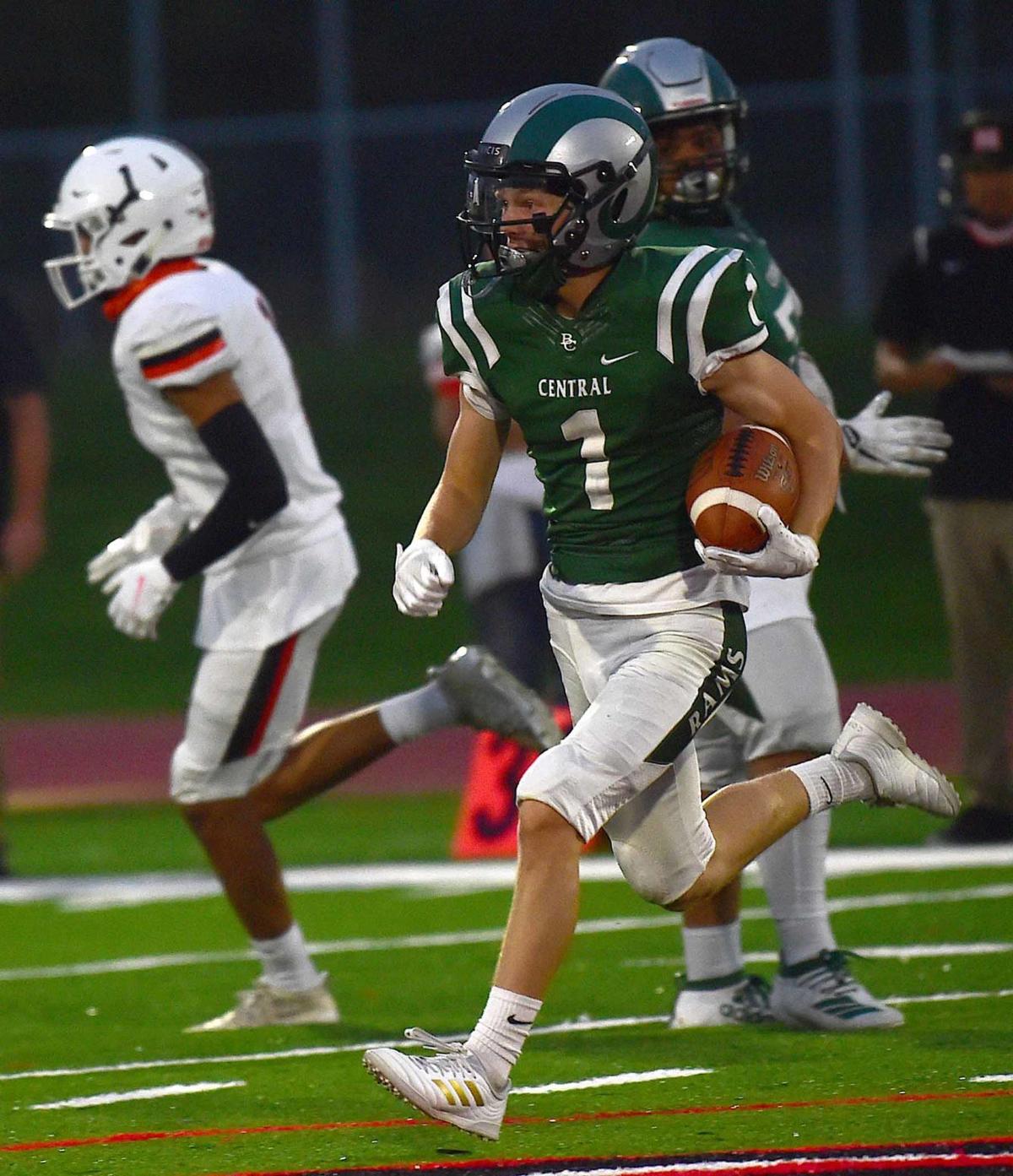 Billings Central's Thomas Hubbard runs the ball after intercepting a pass in a Class A football game against Hardin at the new Lockwood High School field on Friday night.

BILLINGS — Like the season itself, the Billings Central football team took longer than it wanted to get going on Friday night against Hardin.

But the Rams eventually took control and beat the Bulldogs 42-0 at Lockwood Stadium. It was Central’s first home game of the season, while Hardin was making its 2020 debut.

The Rams (2-0) usually play their home games at Rocky Mountain College’s Herb Klindt Field, but they had to move to Lockwood’s brand new stadium because of Rocky’s COVID-19 policy, which limits visitors to the college’s campus.

Lockwood Stadium is more spread out than Herb Klindt and only has bleachers on one side of the field (Herb Klindt has stands on both sides), but Central senior Thomas Hubbard had no issues with the new venue. It helped that a limited number of parents and students were allowed to attend as long as they sat in distanced pods and wore face coverings.

“It was a little different traveling to Lockwood,” Hubbard said. “But it’s a nice field. … It’s fun to play on.”

Hubbard provided the highlight of the game, a 97-yard interception return with 8:47 left in the third quarter. The Rams led 22-0 before the pick-6, and the Bulldogs had driven to Central’s 11-yard line. Hubbard’s touchdown, the first of his career, essentially put the game out of reach.

“It was fun,” Hubbard said. “It really brought the momentum for our defense, held us together.”

Thomas Hubbard grabs his third interception of the game and returns it 97 yards for a TD with 8:47 left in the 3Q. @wearebc1 29@hardinbulldogs 0#MTscores pic.twitter.com/buMjkrSzDi

The interception, made possible by a Derek Damjanovich tip, was Hubbard’s third of the game. He’d never recorded more than two picks in a game before Friday.

On the other side of the ball, Central senior quarterback Marcus Wittman accounted for four touchdowns. He rushed for two one-yard touchdowns and one from three yards out, and he completed a 19-yard TD pass to sophomore Clay Oven.

The Rams were disappointed in their season-opening performance last week at Sidney, which they beat 21-18. Central’s struggles continued in the first quarter Friday, when they lost a fumble in the red zone on their first drive and didn’t score until the opening seconds of the second quarter. The Rams weren’t thrilled with their 15-0 halftime lead, either, but they ironed out most of their issues in the second half.

“We got better from last week,” Hubbard said. “We did not perform very well last week. We still got the W, but we still can improve.”

Hardin squandered a couple good chances to score, but Bulldogs coach Jesse Schmidt was pleased with aspects of his team’s performance. Overall, he was grateful to finally play against another team.

“It feels great to have a football game,” Schmidt said. “It was our first week going up against a different color in a month and a half. Obviously, the looks are a little different than what we’re used to seeing in practice.”

Eastern A teams started their seasons last Friday, two weeks later than usual, because nonconference games were canceled to minimize COVID-19 transmission risk. The Bulldogs were scheduled to host Lewistown last week, but the game was called off because one of Hardin’s players had tested positive for the disease caused by the novel coronavirus. Several Bulldogs had to quarantine, and Hardin suspended fall sports for two weeks (the school shortened the suspension for every sport but football).

Schmidt wasn’t sure if that first game would ever come. He’s glad the wait is over.

“It’s definitely hard to try and keep motivation when you’re just setback after setback,” he said, “but it was great coming in and finally being able to play.”

About 30 Havre football players are in quarantine, leaving the team without enough eligible players for its regular-season finale.

Pairings and results for the 2020 6-Man football playoffs.

No. 2 Billings West comes out on top in back-and-forth game with No. 4 Bozeman

Falcons await the outcome of Friday's Great Falls-CMR game to see if they get a home playoff game.

Roundup from football, volleyball, soccer and cross country around Montana on Friday.

Missoula Sentinel, Billings Central and Fairfield all handed top-five opponents their first losses of the season.

Billings Central's Brock Ping runs the ball against Hardin in Class A football at the new Lockwood High School field on Friday night.

Billings Central's Thomas Hubbard runs the ball after intercepting a pass in a Class A football game against Hardin at the new Lockwood High School field on Friday night.