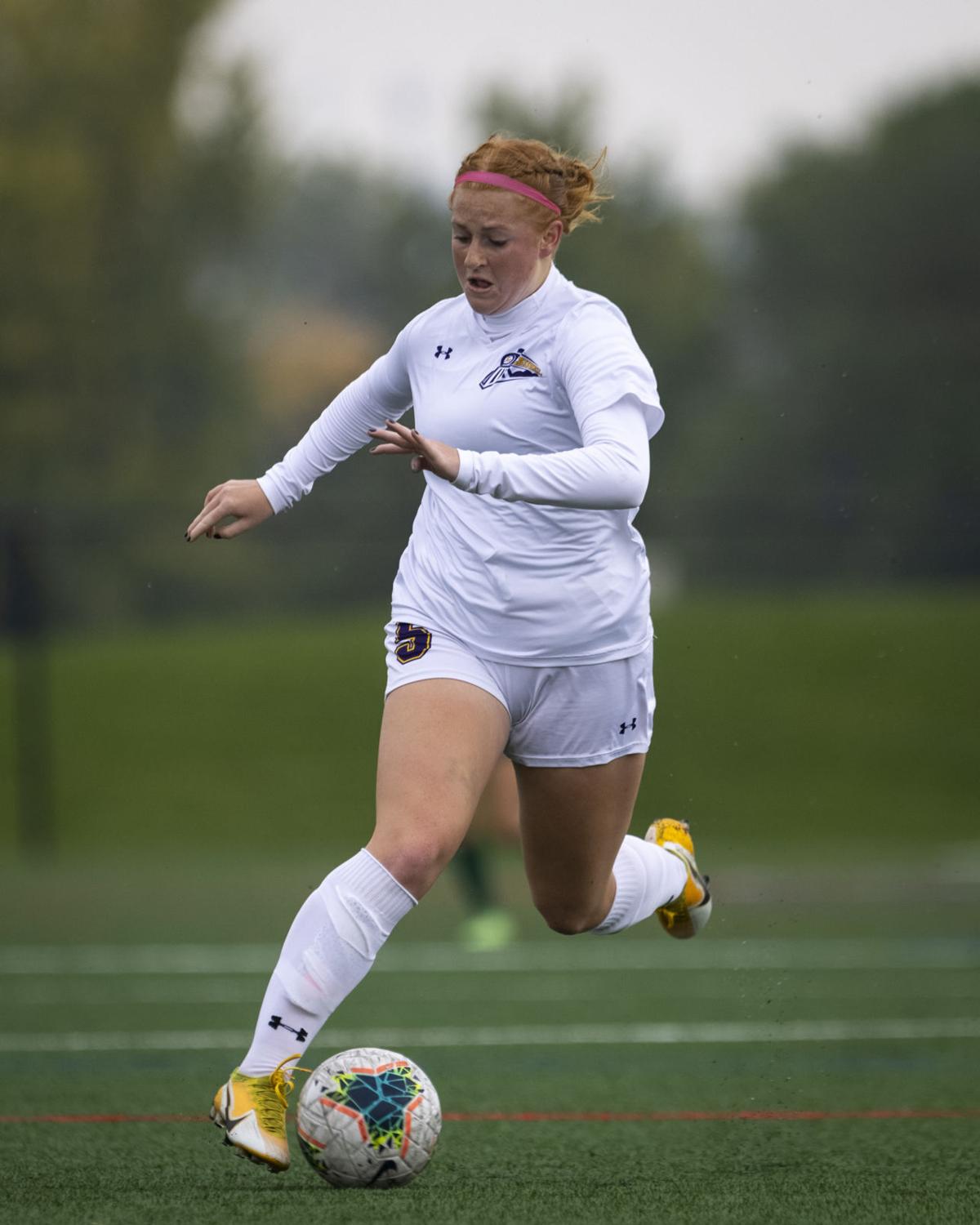 Laurel’s Mya Maack (5), pictured here earlier this season, broke the single-season scoring record in the Class A soccer play-in game with her 38th goal in the Locomotives' win against Livingston. 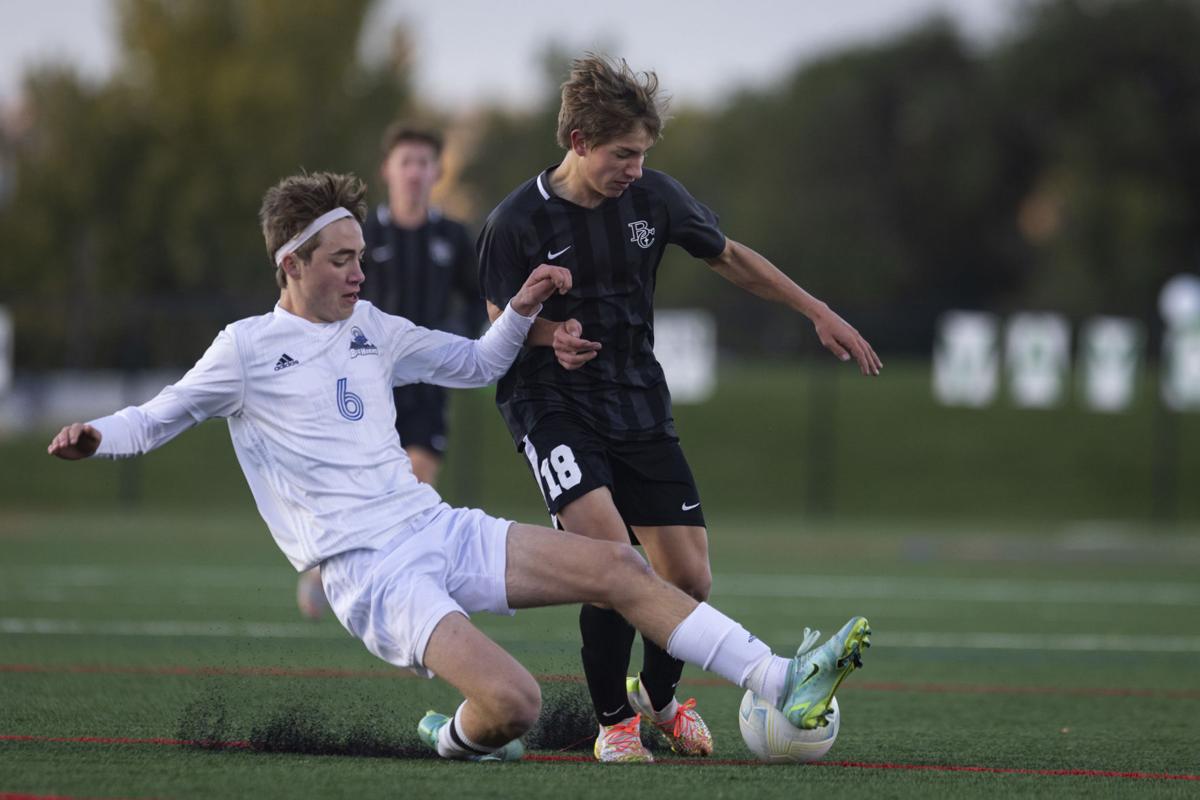 Lone Peak's Max Romney (6) slides in front of Billings Central's Cole Bland (18) during their Class A playoff match at Amend Park on Wednesday.

BILLINGS — Mya Maack broke the single-season record for goals scored Wednesday as the two-time defending champion Locomotives advanced to the quarterfinals of the Class A girls soccer playoffs with a 4-0 win over Livingston at the Laurel Sports Complex.

Maack scored twice against the Rangers, giving her 38 goals to break the mark of 37 held by Morgan Ferestad of Billings Central (2018) and Helena Capital’s Heather Olsen (1996).

Maack, who was diagnosed with strep throat earlier this week, credited Alyse Aby, Chloe Baumann, Madison Peaton and the team’s other midfielders with leading her toward success.

“A lot of those goals were not me at all, it was me being in the right spot and them passing me the ball so well, doing their job so I can do mine,” Maack said. “It was definitely a whole team effort but it’s a lot of fun that I get to celebrate 38 times.”

Also Wednesday, Lone Peak's boys made an early goal stand up and the Bighorns eliminated Billings Central 1-0 at Amend Park to earn the first postseason win in the program’s two-year existence.

Lone Peak (6-6-1) advanced to the quarterfinals and will host Columbia Falls (9-2-1), also on Saturday. Lone Peak and Columbia Falls played to a 1-1 draw to start the season.

The match was a little more tense than the scoreline represents. A first-half penalty kick by Maack gave the Locomotives a 1-0 lead at halftime, and the Rangers had some momentum in the early stages of the second half.

But when Maack scored again on an assist from Aby with about 16 minutes to go, the floodgates opened. Peaton scored on a direct kick from just outside the 18-yard box, and Baumann followed with a goal from distance to beat the keeper above her hands and under the crossbar to give the Locomotives their four-goal cushion.

“Once we score, I think we’re so much more confident,” said Maack, who sat out the remainder of the match shortly after her second goal. “Once we score and get our momentum going, there’s no stopping us.”

Laurel coach Tom Maack knows stopping his team will be the intent of the Wildkats on Saturday. The Locomotives have eliminated Columbia Falls from the playoffs each of the past two seasons.

“They’re going to come to play right away when the game begins on Saturday so we’re going to have to be prepared physically and mentally,” he said. “We’ll let today sink in, let everybody heal up and have a light practice day (Thursday) and then get after a game plan for facing them.”

A ball bounced out of the 18-yard box into the path of Max Romney, who settled himself and let fly from about 25 yards out to net the game’s lone goal. That came in the fifth minute, and from there, the Bighorns hung on.

Billings Central had defeated Lone Peak 5-1 and 2-0 in earlier meetings this season.

“(The Rams) are a well-coached team and they’re a really good group of kids. Like when it happens to my seniors, I feel bad for their seniors,” Bighorns coach Tony Coppola said. “It’s always tough to watch those guys get emotional losing their last game like that.

“But I’m happy with the result, I thought we earned it this time. It was great to see us improve over the last two games (against Central) and come away with a win. The last two years I’ve been involved as a coach we’ve lost every game with Billings so it was good to walk away with one.”

Like this season, the Bighorns qualified for the playoffs as the No. 3 seed from the East. Unlike last year, when the Bighorns lost to Whitefish, they’re moving on, and getting to host a playoff match at that.

“It’s been such a wild ride, making the playoffs last year and getting into them again this year and getting that win,” Coppola said. “Actually getting to host one, which is pretty amazing, too. We’re a Class C school and we’re competing against Class A high schools.

“We just got a brand new facility … we’re calling it the Bighorn Coliseum and it’s pretty awesome. We’ve got a brand-new turf field and track and stuff like that, just in time before the snow came. We’ve played a few games on it so it’ll be awesome to be able to host a playoff game there.”

Billings Central, the No. 2 seed from the East, finished the season 8-3-2.

Check out the matches.

Both Eastern A powers will host semifinal matches next Saturday.

Check out the league races.

Check out the league races.

Central girls will host Hamilton in a State A first-round contest on Saturday.

Laurel’s Mya Maack (5), pictured here earlier this season, broke the single-season scoring record in the Class A soccer play-in game with her 38th goal in the Locomotives' win against Livingston.

Lone Peak's Max Romney (6) slides in front of Billings Central's Cole Bland (18) during their Class A playoff match at Amend Park on Wednesday.