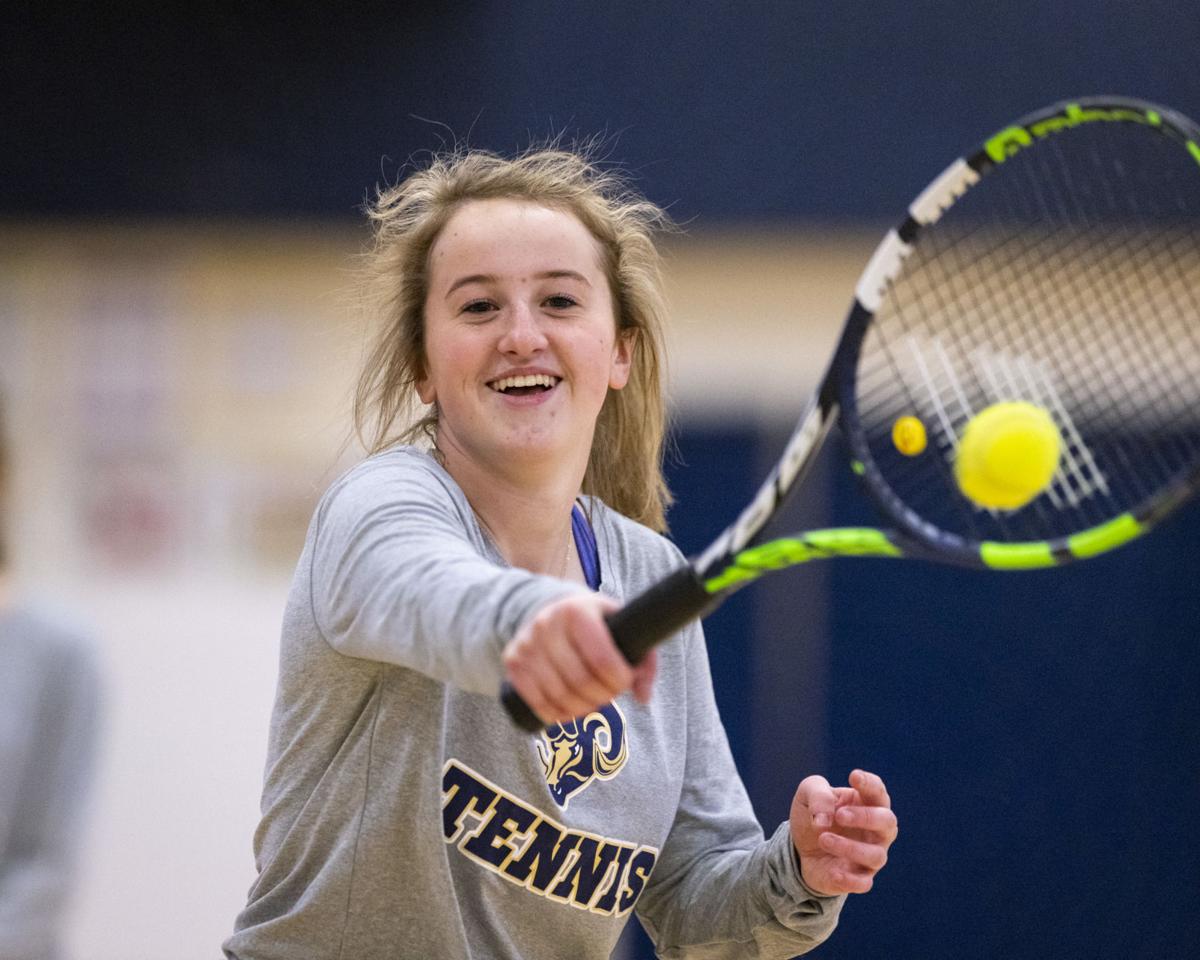 Krista Hartman practices with her teammates during the Red Lodge tennis team practice at the Red Lodge Civic Center on April 14, 2021. 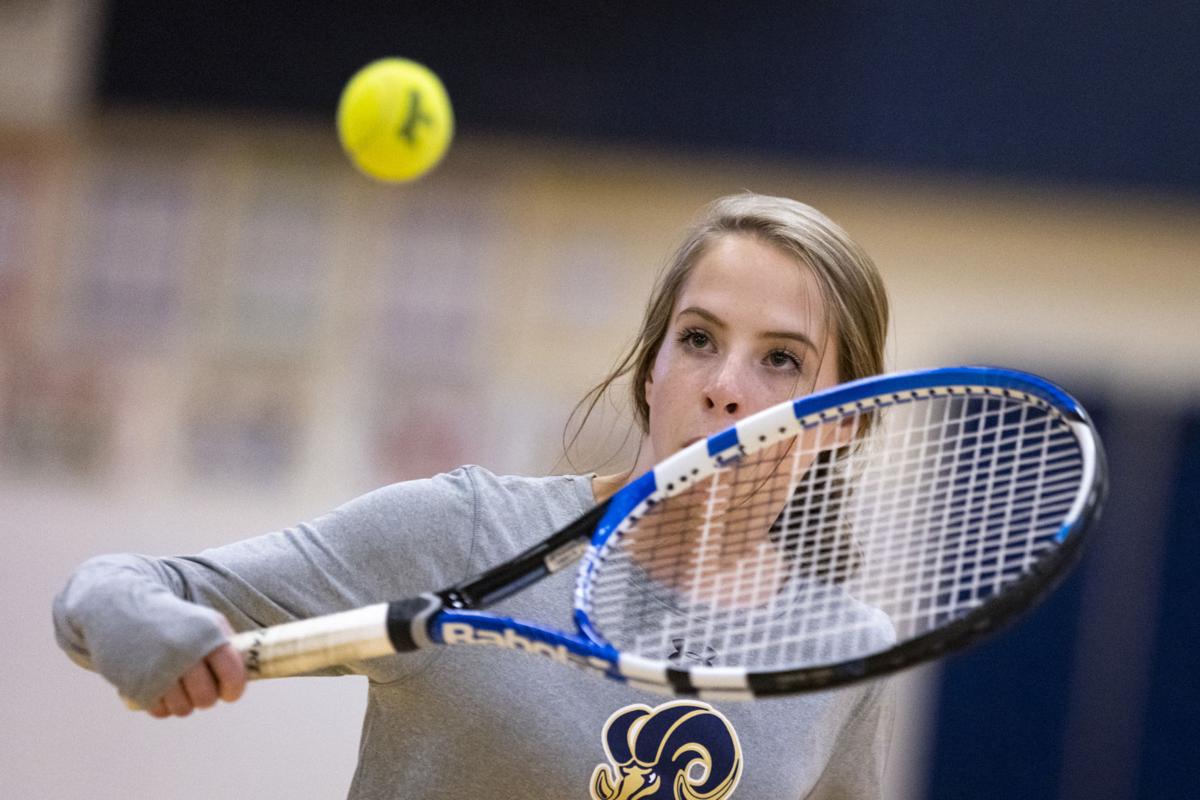 Emma Harris practices with her teammates during the Red Lodge tennis team practice at the Red Lodge Civic Center on April 14, 2021. 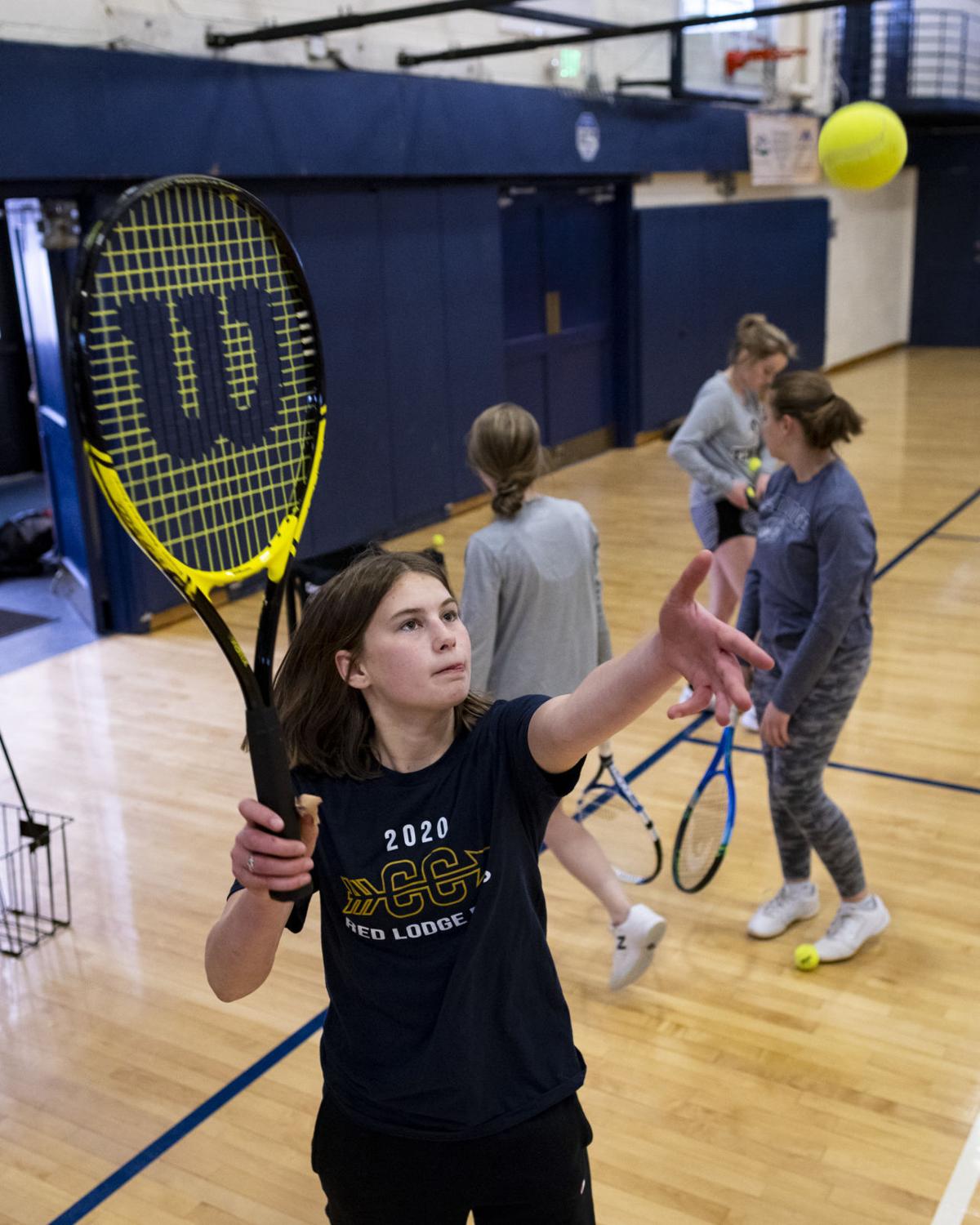 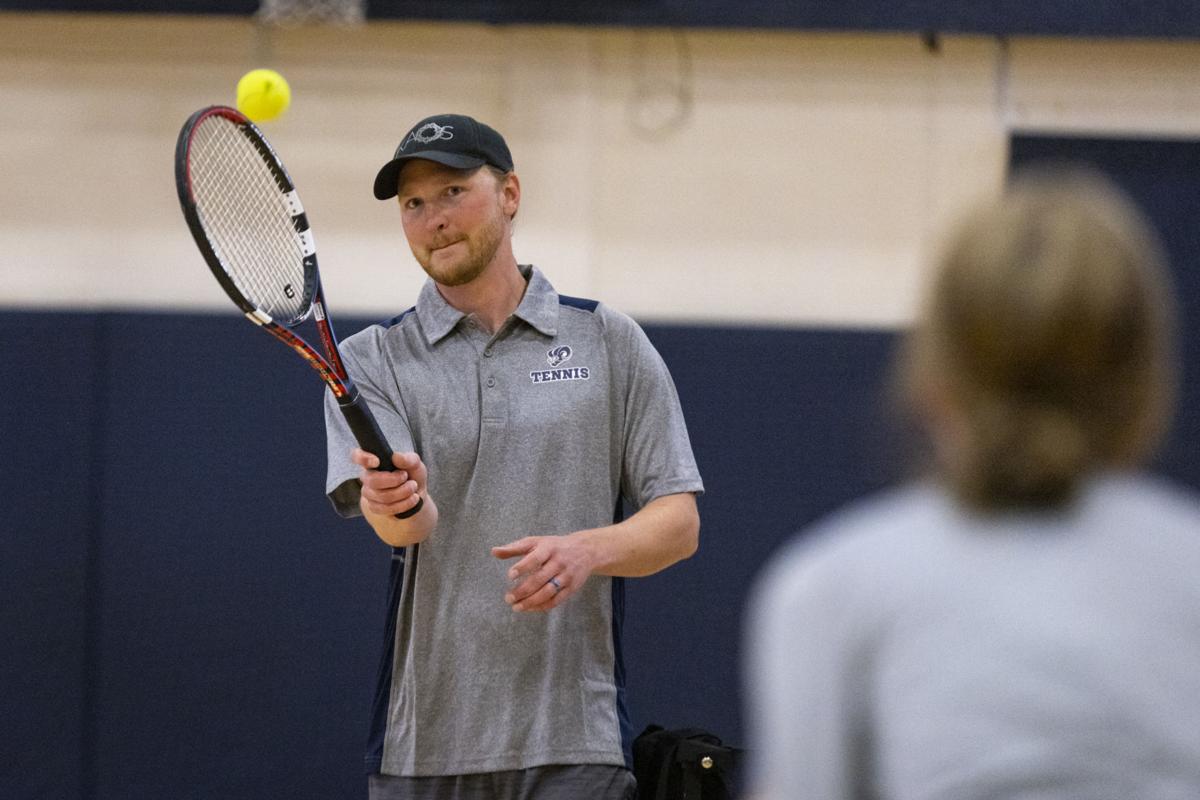 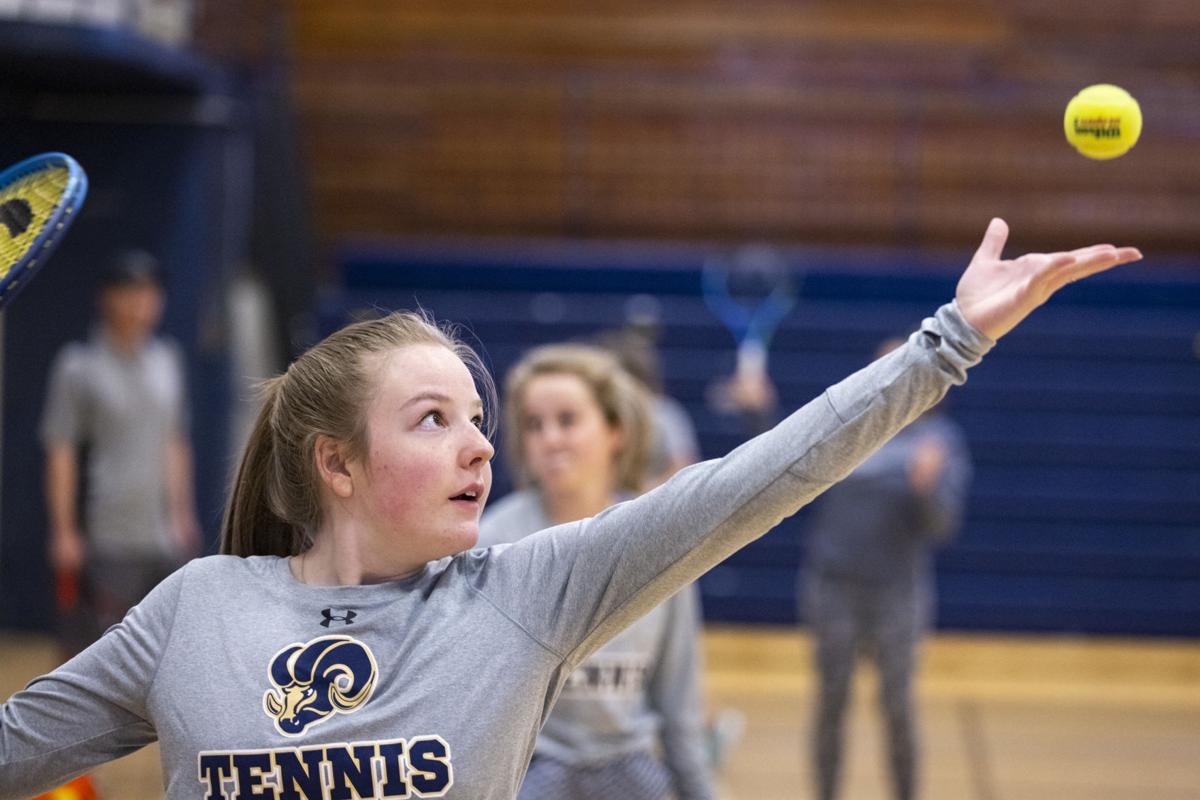 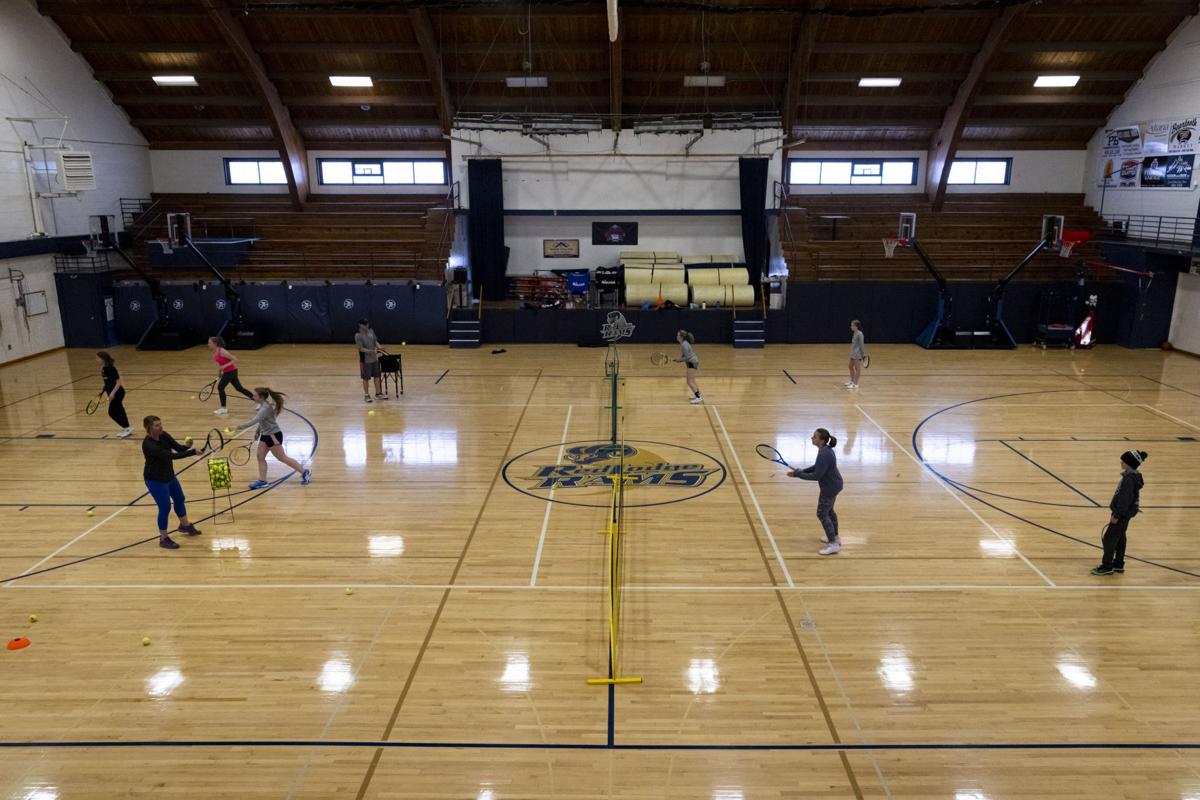 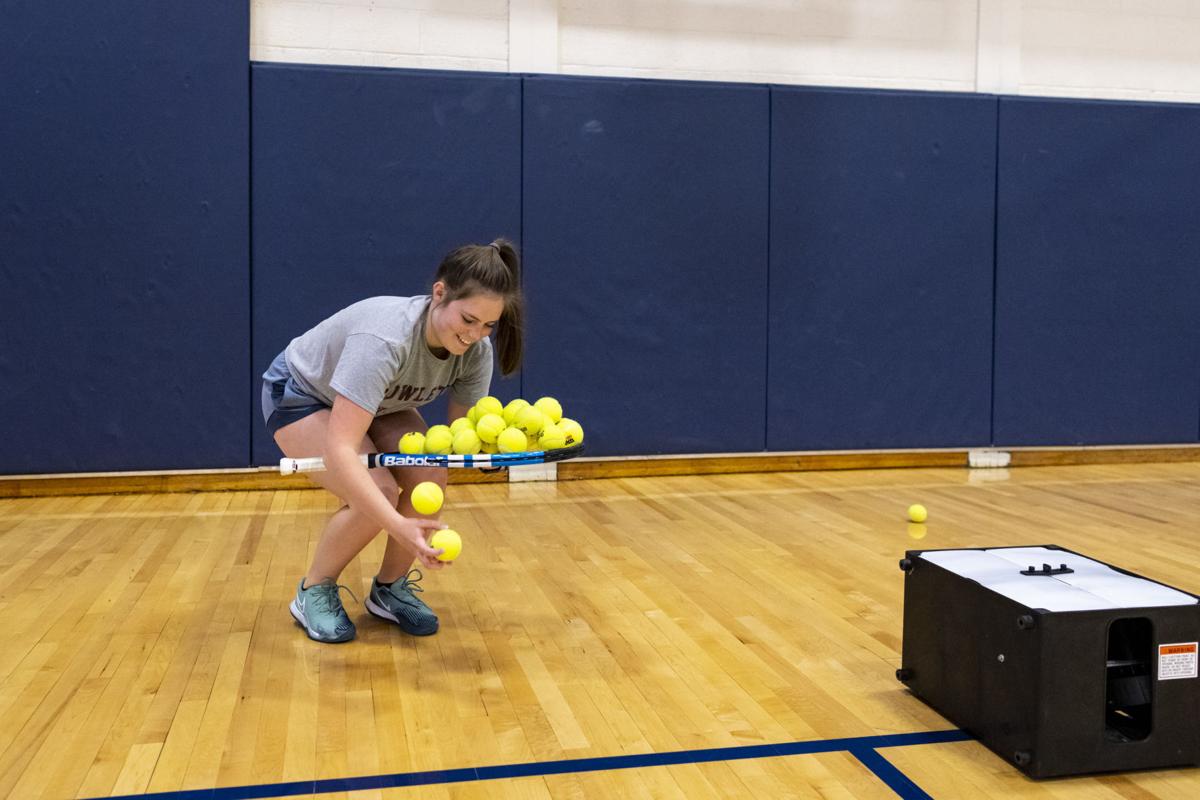 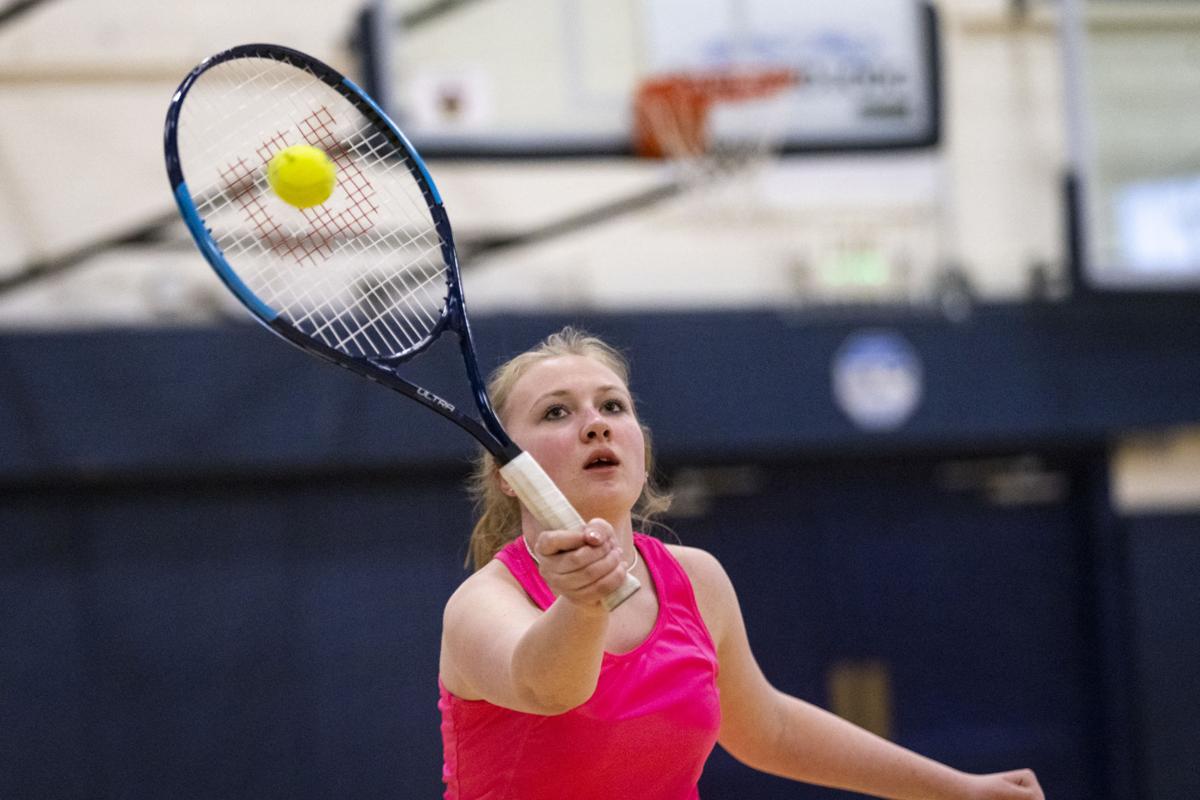 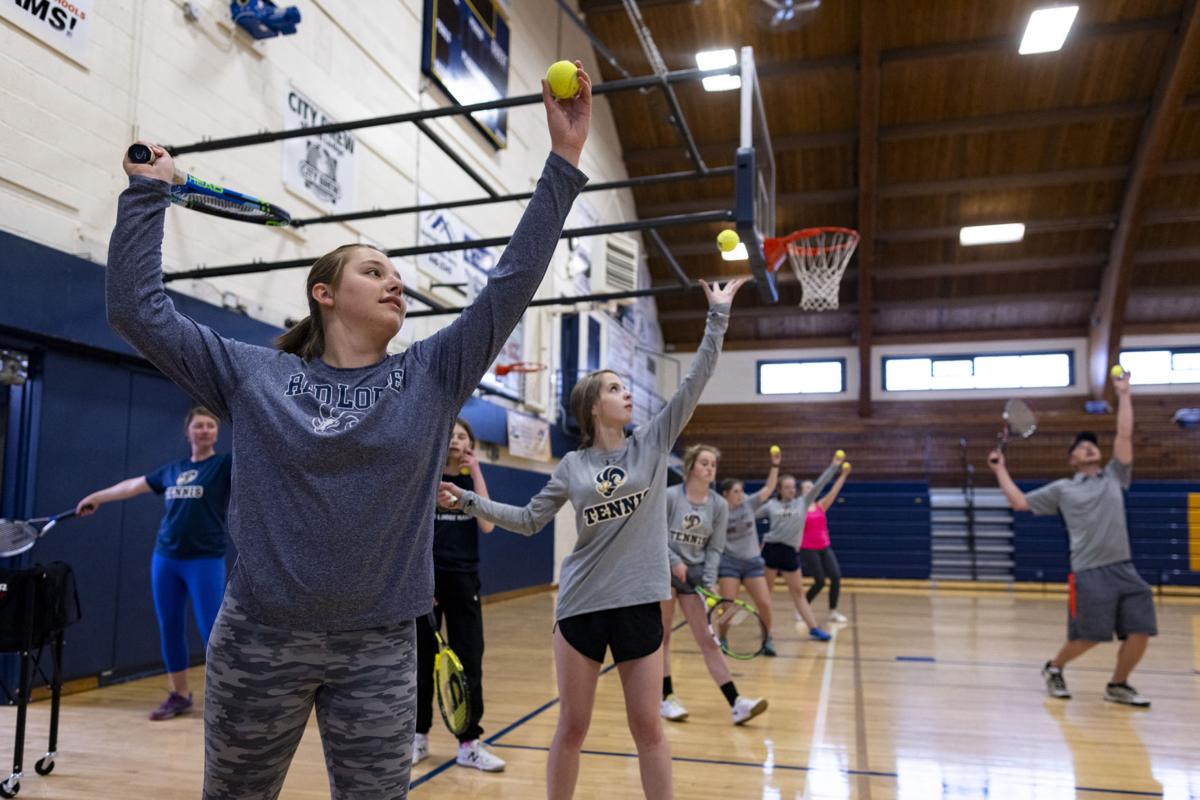 RED LODGE — The Red Lodge girls tennis team was practicing outside for the first time in a while. It was April 21, and the weather was finally nice. Well, nice for Red Lodge in April — just below 50 degrees, sunny and windy.

Practicing outdoors is no small thing for the Rams. It’s the team’s first season, so none of the eight girls on the roster are experienced tennis players. There are three tennis courts in the entire town of Red Lodge, and one is half-usable because one side is filled with cracks and a sunken area. Those courts are where the Rams practiced on April 21. When the weather’s been too cold or there’s been too much snow to shovel, the team has held practice inside, usually in a basketball gym or a racquetball court.

“Playing indoors, even if we have the full size gym, it still is not ideal,” said Red Lodge coach Avery Sindelar. “We don't have the proper lines. The girls don't know the proper distances of where they're trying to hit — is the ball in or out? — so it makes it hard to practice. The ball bounces differently.

“We can play indoors and we can have a lot of fun, but then they go outside and it's kind of a completely different game.”

This setup has forced Sindelar and assistant Lindsey Hoffman to dedicate even more attention to the fundamentals. That’s no small thing for a team full of newcomers, and the rookie season has already been a success for the Rams. They’re optimistic that this brand new team will start a tennis trend in Red Lodge.

“It’s super cool to think that, ‘Whoa, I was part of the debut team,’” said Red Lodge sophomore Braelyn Hay.

Community members have told Sindelar that Red Lodge had a tennis team several decades ago that lasted a very short time. He hasn’t heard much else. That team has been lost to history the way his team almost certainly won’t be.

Red Lodge added girls tennis and boys wrestling two years ago. The wrestling’s team enjoyed its first season in the winter of 2019-20. The tennis team was supposed to debut last spring, but the season was canceled because of COVID-19.

The addition of tennis came down to a student body vote between it and softball. Sindelar, Hoffman and their players aren’t exactly sure why students chose tennis over softball.

“Because it’s a better sport,” Hoffman said with a laugh.

Hoffman played tennis at Winona (Minnesota) State, and Sindelar was a strong tennis player at Missoula Sentinel. Both still play competitively, which is how they met in Red Lodge.

Sindelar is a math teacher at Red Lodge, so he was the logical choice to be the head girls tennis coach. Finding players was not the easiest task, considering the lack of tennis culture in town, so he worked hard to put together a roster.

“Coach Sindelar was nagging me about it a lot,” said Red Lodge junior Krista Hartman (Hay said Sindelar pestered her, too). “I was thinking about it, but I was kind of hesitant. I didn't know if I would like it, and he bothered me so much. I was like, ‘I'll just go and play with my dad this weekend and see if I like it.’ But I didn't, and I saw (Sindelar) at the park and he made me come play with him and his wife for a little bit. I actually really liked it.”

Hartman, who also plays soccer and basketball, has one of the Rams’ few individual wins so far this season. So does classmate Katelyn Riches, who didn’t play a sport before tennis was added. She is a dancer and a cheerleader.

“I don't really do sports like that. I cheer for them, and I dance by myself, so playing with the team and against other people is just a cool experience,” Riches said. “My friends and my other teammates, they're here for me now. It's like a reverse role.”

Most of the eight girls weren’t close before joining the team. After long bus rides filled with sushi and giggles, they’ve become good friends this spring. And none are seniors, so there’s potential for significant growth.

The Rams would be happy to get a couple extra outdoor tennis courts, let alone an indoor facility. Such upgrades are off in the distant future, but Sindelar and Hoffman are doing what they can to make incremental improvements.

During that April 21 practice, Sindelar introduced the Tennis Tutor Prolite, a machine that fires tennis balls over the net with perfect topspin trajectory, allowing a player to practice without a human partner. The machine was donated to the tennis program last year.

Red Lodge will always be a ski town with inconsistent spring weather, to put it mildly. No matter how hard Sindelar and Hoffman work, there simply might be a cap on tennis’ growth in town and at the high school.

But Sindelar and Hoffman are going to work hard, and they’re optimistic that this season will be remembered decades from now.

“This is my first year coaching, and I can't believe how much joy it's actually brought me. Each day, I’m going there and sharing my passion with them and seeing how quickly they're picking it up,” Sindelar said. “I didn't feel like we were stealing the girls away from another sport. I think we were just opening the doors for some girls that wouldn't be doing anything otherwise right now.”

Two years after losing the State A boys doubles titles match with his brother, Ben Noteboom is eyeing first place, while his twin sister searches for her first state win.

Check out final scores from the girls portion of the Mayfair tennis meet.

Check out the final scores.

Ten tennis teams will compete at three locations Friday and Saturday in Billings.

Krista Hartman practices with her teammates during the Red Lodge tennis team practice at the Red Lodge Civic Center on April 14, 2021.

Emma Harris practices with her teammates during the Red Lodge tennis team practice at the Red Lodge Civic Center on April 14, 2021.