LAUREL — Kylie Zimmer saw her discus mark of 145 feet, 6 inches and knew she had set a record. She didn’t realize she had broken two.

The one Zimmer knew about was her personal mark, which was also the Lewistown girls discus record. The senior was pleasantly surprised when someone told her the throw was the top girls mark in the history of the Midland Roundtable Top 10 track and field meet.

Kylie Zimmer of the @ferguseagles sets a program and Top 10 girls discus record with a throw of 145 feet, 6 inches. The previous record was 144-1.5. #MTscores pic.twitter.com/wbrM0d8HgD

Zimmer’s throw, which was into a crosswind, surpassed Billings West’s Jessica Sharbono, who tossed the discus 144-1½ in 2009 to set the then-record. Zimmer was the only athlete to enter the Top 10 record book Tuesday at the Laurel Sports Complex, but the meet sponsored by Beartooth Bank featured several other impressive performances.

Zimmer finished the Top 10 on a disappointing note. Her best mark in the shot put was 38-2, almost six feet below her PR and her second worst mark all season. Colstrip junior Jamie Whitedirt won the event Tuesday with a PR of 42-7.

But Zimmer is pleased to be competing at all, let alone at a high level. The coronavirus pandemic took away last season, and Zimmer tore the patellar tendon in her right knee last summer and needed surgery. Earlier this season, she suffered two stress fractures in her left foot that still requires a brace.

“I’m thankful for a high pain tolerance,” Zimmer said with a laugh.

Setting the Top 10 girls discus record was exciting for Zimmer, but there’s a reason she didn’t know about it beforehand. She’s focused on shrugging off all of her setbacks, setting PRs and winning her first Class A state title later this month. Two years ago, she finished second in the State A discus and shot put. Her sister, Anna, earned the shot put title by 1½ inches.

“I was more focused on coming here and just having a good day. What happens, happens,” Zimmer said. “I had to learn to compete against myself. As a sophomore, my sister was really the only one who was there with me after my freshman year, so then after she was gone, junior year my mentality was, ‘Get your PR.’”

Huntley Project senior Noah Bouchard could have focused solely on breaking the Top 10 boys high jump record of 6 feet, 9 inches, set by Colstrip's Scott MacFarlane in 1998. Instead, he tried to get three records with one jump.

After Bouchard won the high jump with a mark of 6-6 Tuesday, he raised the bar to 6-11. His PR is 6-10, which he recorded on April 24. He could have tried 6-10 before 6-11 on Tuesday, but he knew he only had so many good jumps, so he wanted to go straight for the personal best and break the Laurel Sports Complex record, which he heard was 6-10.

“I know I can hit those higher heights. I just missed one little queue. One little mistake, and it’s over,” Bouchard said. The fix is “just holding my hips higher. I got a good arch, and at lower heights I can be more flexible and just lift my hips earlier. But when I get to those higher heights, I’ve just got to be perfect, and I’m not perfect yet.”

Bouchard’s disappointment after his high jump misses masked his overall success at the Top 10. In addition to the high jump win, he placed third in the triple jump and finished first in the long jump and 110-meter hurdles. His hurdles time of 14.66 seconds was a PR and was 0.68 seconds faster than the second place finisher, Billings West senior Ryan DeVries, who is the second-fastest 110 hurdler in the state.

“It was nice to come out and just know that I can still improve in that area, as well,” Bouchard said. “The Top 10, it’s a really competitive meet, and I won three (events), so that puts a smile on my face knowing hard work pays off. And god-given talent.”

There was little reason to believe Billings West freshman Taylee Chirrick would win any race at the Top 10, let alone two. But the absence of evidence does not mean evidence of absence.

Chirrick won the girls 200-meter dash with a time of 26.62 seconds, and she placed first in the 400 with a 58.16. Those were PRs, but that’s not surprising for someone running those events for the second time in her high school career.

This was the third meet of the season for Chirrick, who pulled her quad on the second day of practice in March.

“I made sure I took enough time off that I wouldn’t just run and hurt it again,” she said.

Chirrick entered the Top 10 with the fifth best time of the girls 200 entrants and the third best in the 400. It helped Chirrick that the fastest 200 runner at the meet, her junior teammate Jaeden Wolff, didn’t run the event. Still, Chirrick outran some accomplished athletes to win the 200 and 400.

“It’s pretty exciting, just coming in and seeing how you can do,” Chirrick said.

In the girls 1,600 relay, the Locomotives (Alyse Aby, Carly Cook, Morgan Maack, Grace Timm) broke the previous school record of 4:04.4 with a time of 4:03.57. The Locos topped West’s relay team, which featured Chirrick and Wolff, by 1.46 seconds.

Bozeman junior Hannah Schonhoff won the high jump with a leap of 5-6, one inch off the Top 10 record and tied for her PR. She missed three attempts at 5-7.

The top 10 marks in each event put up by Montana athletes so far this season.

Malikye Simpson, who has football offers from Montana and Montana State, has the state's best times in the 100 and 200 this season.

Zimmerman set a PR with a jump of 12 feet, 2 inches Saturday and just missed setting a Billings West school record at 12-7.

Multiple Top 10 records are in danger of being broken.

Check out the latest meet results.

Zimmerman entered the week with the state's best pole vault at 12 feet, 2 inches. 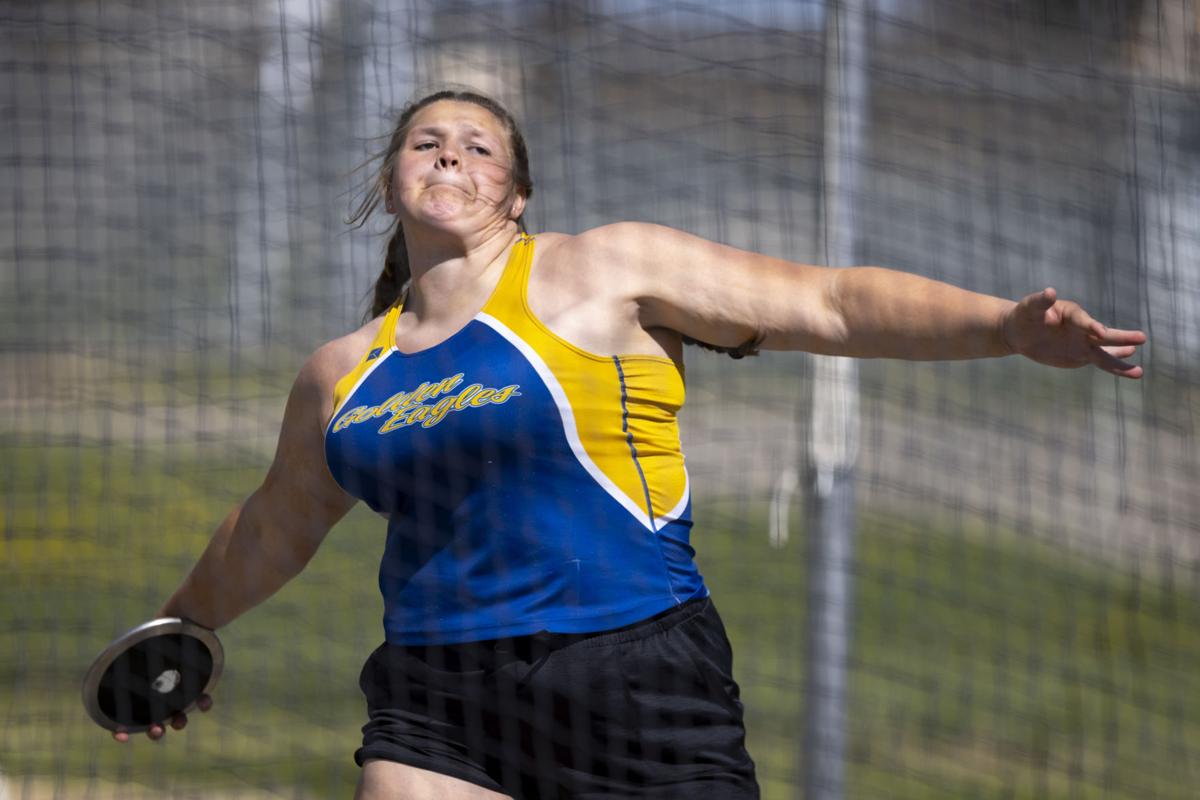 Lewistown’s Kylie Zimmer competes in discus during the Midland Roundtable Top 10 Track and Field Meet at the Laurel Sports Complex on Tuesday. Zimmer went on to set a meet record in girls discus. 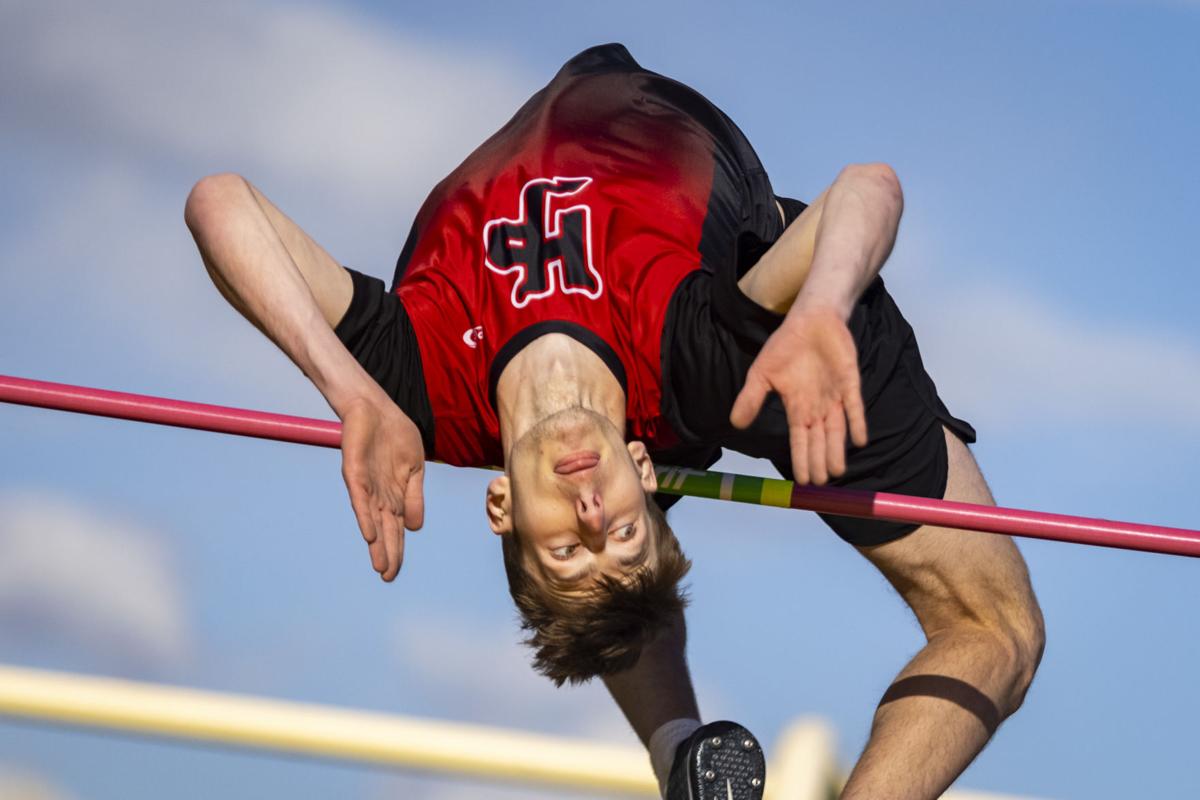 Huntley Project’s Noah Bouchard competes in the high jump during the Midland Roundtable Top 10 Track and Field Meet at the Laurel Sports Complex on Tuesday.