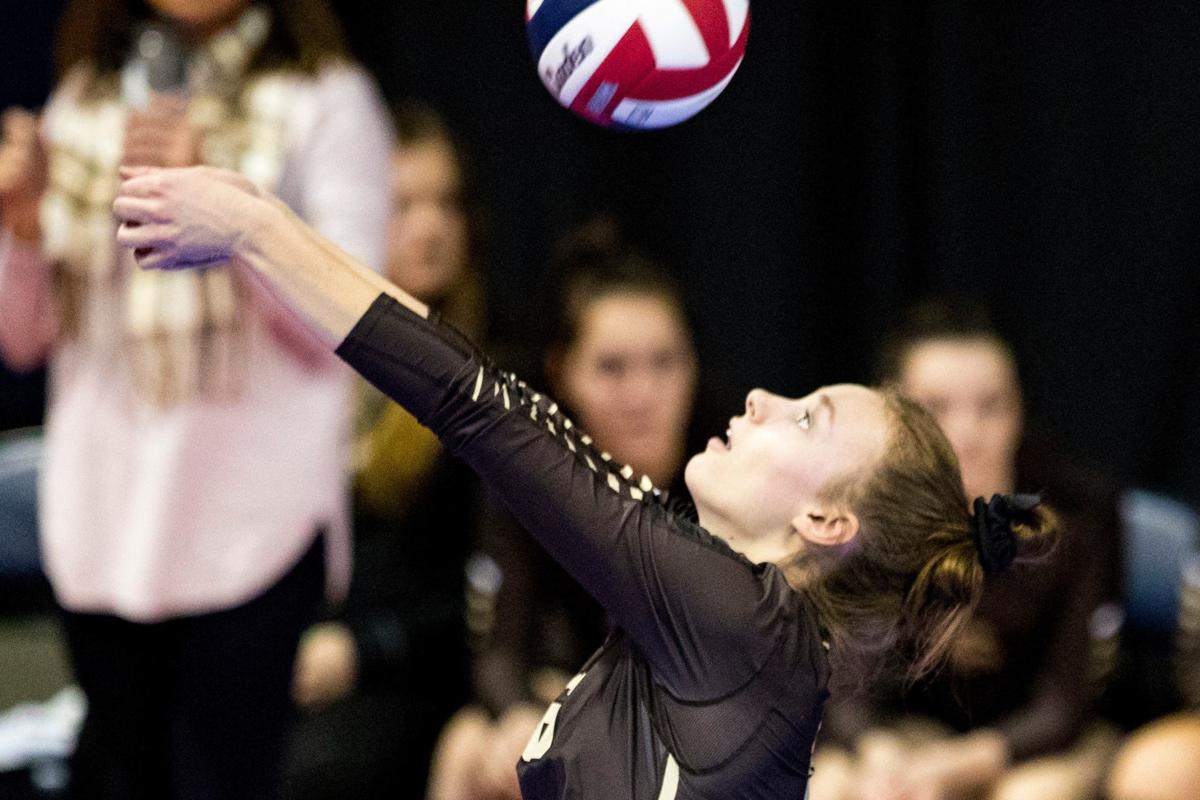 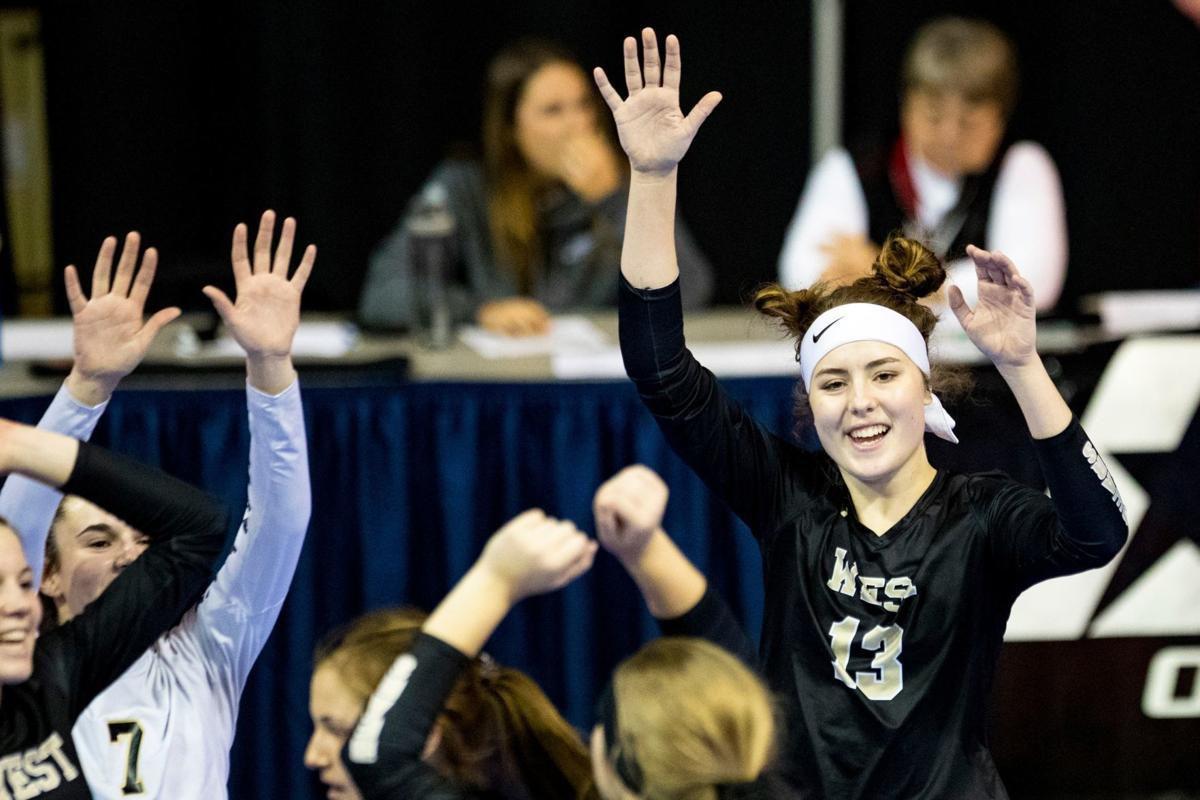 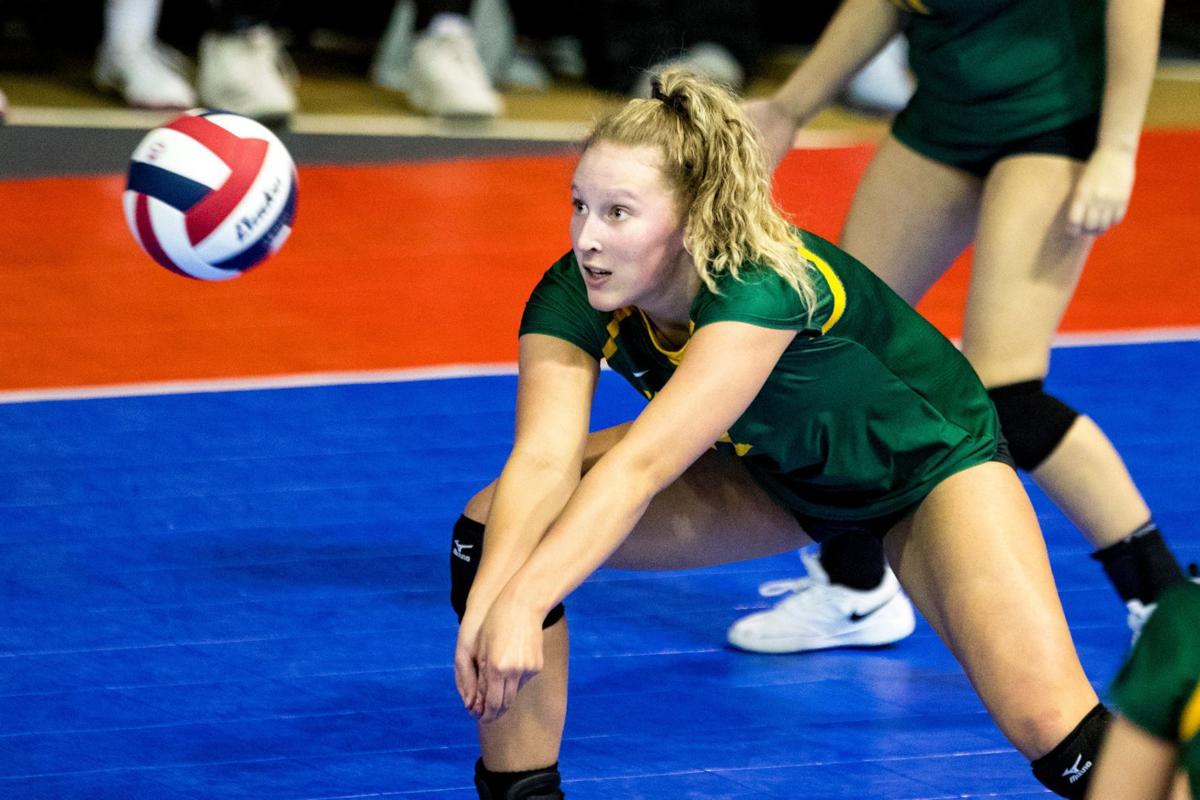 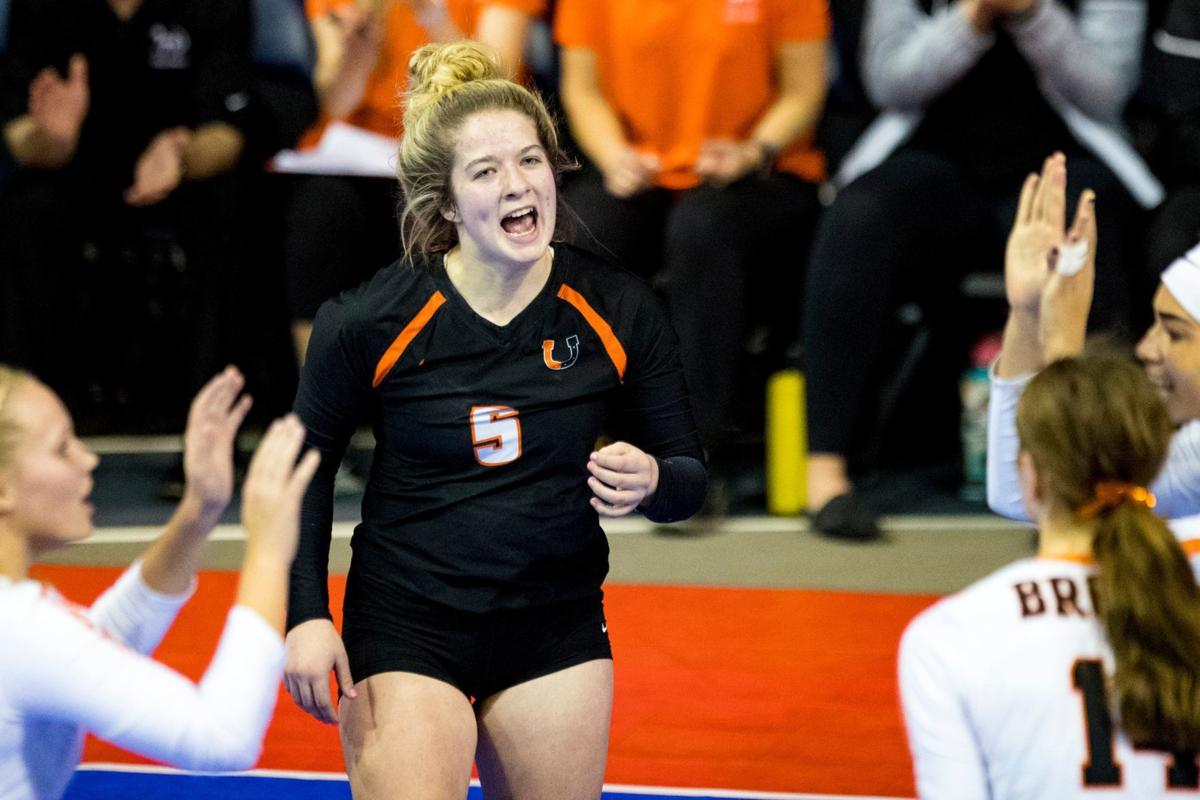 Billings Senior's Hailie George (5) cheers after a point during the Helena Bengals' first round match against the Billings Senior Broncs in the Class AA State Volleyball Tournament at Montana State University's Brick Breeden Fieldhouse in Bozeman on Thursday, November 14, 2019. 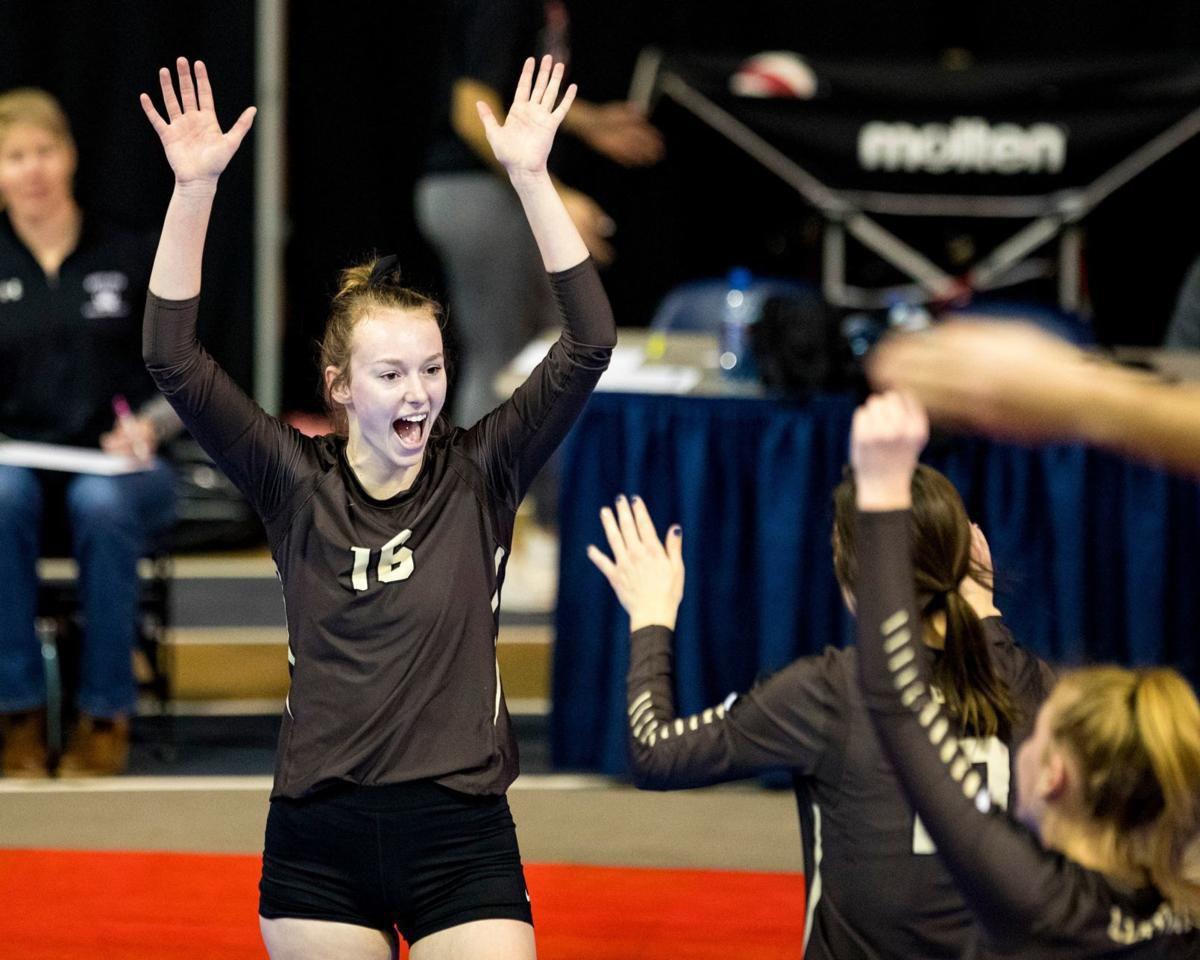 Helena Capital's Sarah Ashley (16) celebrates after a point during the Helena Capital Bruins' first round match against the Bozeman Hawks in the Class AA State Volleyball Tournament at Montana State University's Brick Breeden Fieldhouse in Bozeman on Thursday, November 14, 2019.

Billings Senior's Hailie George (5) cheers after a point during the Helena Bengals' first round match against the Billings Senior Broncs in the Class AA State Volleyball Tournament at Montana State University's Brick Breeden Fieldhouse in Bozeman on Thursday, November 14, 2019.

Helena Capital's Sarah Ashley (16) celebrates after a point during the Helena Capital Bruins' first round match against the Bozeman Hawks in the Class AA State Volleyball Tournament at Montana State University's Brick Breeden Fieldhouse in Bozeman on Thursday, November 14, 2019.

BOZEMAN - All season long there have been two dominant teams in Class AA volleyball.

Undefeated Helena Capital, which is also the defending state champion is one of them. The other is CMR and after the Rustlers swept their way past Billings Senior 25-13, 25-12 and 25-18 Thursday night at the Brick Breeden Fieldhouse in Bozeman, the showdown is set for Friday night at 6 p.m.

That's when CMR and Capital, two teams with one loss combined, will meet for a berth in the Class AA state championship game.

"We feel really good," CMR standout Allie Olsen said. "This is something (playing in undefeated semifinal) that hasn't happened in 26 years with this program so we are just really excited about the opportunity."

Olsen, who was a dominant force in both her team's matches Thursday, also said the Rustlers were ready for some ice cream after dispatching of Billings Senior.

"It will be nice to get some time to rest," Olsen said. "I'm not sure what we will do during the day tomorrow, but I know tonight, we are getting some ice cream."

Olsen registered 22 kills in the win for the Rustlers as well as adding two blocks. Tennisen Hiller also pitched in with 28 assists and four aces.

Senior got a strong effort from Bailey King in defeat as she finished with five kills and five blocks.

While the Rustlers will play at 6 p.m., Billings Senior will be back on the court Friday at 2 p.m.

Helena Capital, the defending Class AA state champions haven't been pushed very often this season. Yet in the quarterfinals of the state tournament, Billings West put the Bruins on notice.

But then, the Bruins woke up. Paige Bartsch and Sarah Ashley ignited the unbeaten Bruins who swept the last three sets 25-16, 25-18 and 25-11 to move into the undefeated semifinal Friday night at 6 p.m.

"West played really well and it's great to see a team rise up like that," Capital head coach Rebecca Cleveland said. "Since we played them earlier in the year, they have made a huge amount of progress. But the next three sets we played the way we should."

Ashley, a senior, was a huge part of that for the Bruins. The future Lady Griz volleyball player was dominant over the final three sets, finishing with a match-high 17 kills to go along with 16 digs and three blocks.

Bartsch was also stellar. She drilled home a kill early in the second that set the tone for the Bruins comeback. The junior also contributed with 14 kills, five aces and 12 digs.

Helena Capital will play in the undefeated semifinal Friday night at 6 p.m. Billings West will compete in loser-out action Friday at 4 p.m.

No team knows better than Billings Senior that a volleyball match isn't over until it's over.

The Broncs nearly missed the state tournament after winning a five-set match to qualify and down 2-0 to Helena High Thursday in the opening round at the Class AA state tournament in Bozeman at the Brick Breeden Fieldhouse, the Broncs knew there was a long way to go.

"With what we have known from our playoff match, nothing is ever final until the end of set five," Senior head coach Karen Switzer said. "So it was just an encouragement that this was not over and that we could come back and win."

"We have grown so much," Switzer said. "I think we were a little underestimated going into this match. But for my girls to come out and play like that knowing they were the underdogs, I am so proud. So proud."

Bailey King was a driving force in the win for Senior with 13 kills and six blocks. Olivia LaBeau also had a big night with seven blocks and six kills.

Senior will play again at 8 p.m. vs CMR. Helena will take on Butte Friday at 12 p.m.

The first round of the state volleyball tournament isn't necessarily about winning, it's about surviving.

And even though Great Falls CMR knocked off Butte High 3-0, the Bulldogs put up a fight and made the Rustlers work for the sweep especially in the second and third sets.

"I don't think we did anything exceptionally well," CMR head coach Patrick Hiller said. "Butte controlled the ball better than I thought they were going to and so that kept them tight in those last two sets. But overall, we did enough to get that first win at state which is something these girls haven't done before."

Allie Olson, who recently signed to play volleyball at the University of Utah, put forth a solid effort with 18 kills and six blocks. Norah Allen added three aces and Tennisen Hiller had 24 assists.

Brooke McGrath led the way for the Bulldogs in defeat with seven kills. Ally Mueller managed four blocks and MacKenzie Tufty contributed with five kills and an ace.

Butte will play Friday at 12 p.m. in loser-out action. CMR will play the winner of Helena High and Billings Senior at 8 p.m.

Every team at the Class AA state tournament is hoping to knock off Helena Capital and after an opening-round win, Billings West is ready to take its shot.

"A huge thing for us was our blocking," Billings West head coach Monica Grimsrud said. "We have kind of struggled with our blocking all season and that was a big focus for us this week and they brought it today."

West finished the match with 12 total blocks, with 6.5 of those blocks coming from Shauna Stene who also added 12 kills. Molly Nault also managed 19 digs as the Bears tallied 38 kills compared to 20 for Missoula Sentinel.

Sheridan Scheweyen led the way for the Spartans in the loss. She finished the match with six kills and three aces. Missoula Sentinel will play again in loser-out action Friday at 10 a.m.

Billings West, on the other hand, will advance to the next round, which will tonight at 6 p.m. against defending state champion Helena Capital.

"They have a lot of guns," Grimsud said. "But we do too. We played them at the beginning of the year and took a set off them, so we know they are beatable and we want to be the team to do it.

Helena Capital breezed through the regular season and even though the Bruins knocked off Bozeman 3-0 in the opening match of the Class AA state tournament, it wasn't as easy as it looked.

The Bruins then finished off the sweep with a 25-19 win in the third, despite again falling behind in the early stages of the set.

"We need to step up our game serve-receive wise," Capital head coach Rebecca Cleveland said. "But that's going to be an easy fix and we will turn around and get ready for a (6 p.m.) game."

"Being the top seed, everyone is gunning for and you always have to have your best game," Cleveland said. "And tonight, I anticipate we will have corrected those little mistakes that we were making."

Helena Capital will play at 6 p.m. in the winner's bracket. Bozeman will play again Friday morning at 10 a.m. in loser-out action.

This gallery will be updated throughout the day.