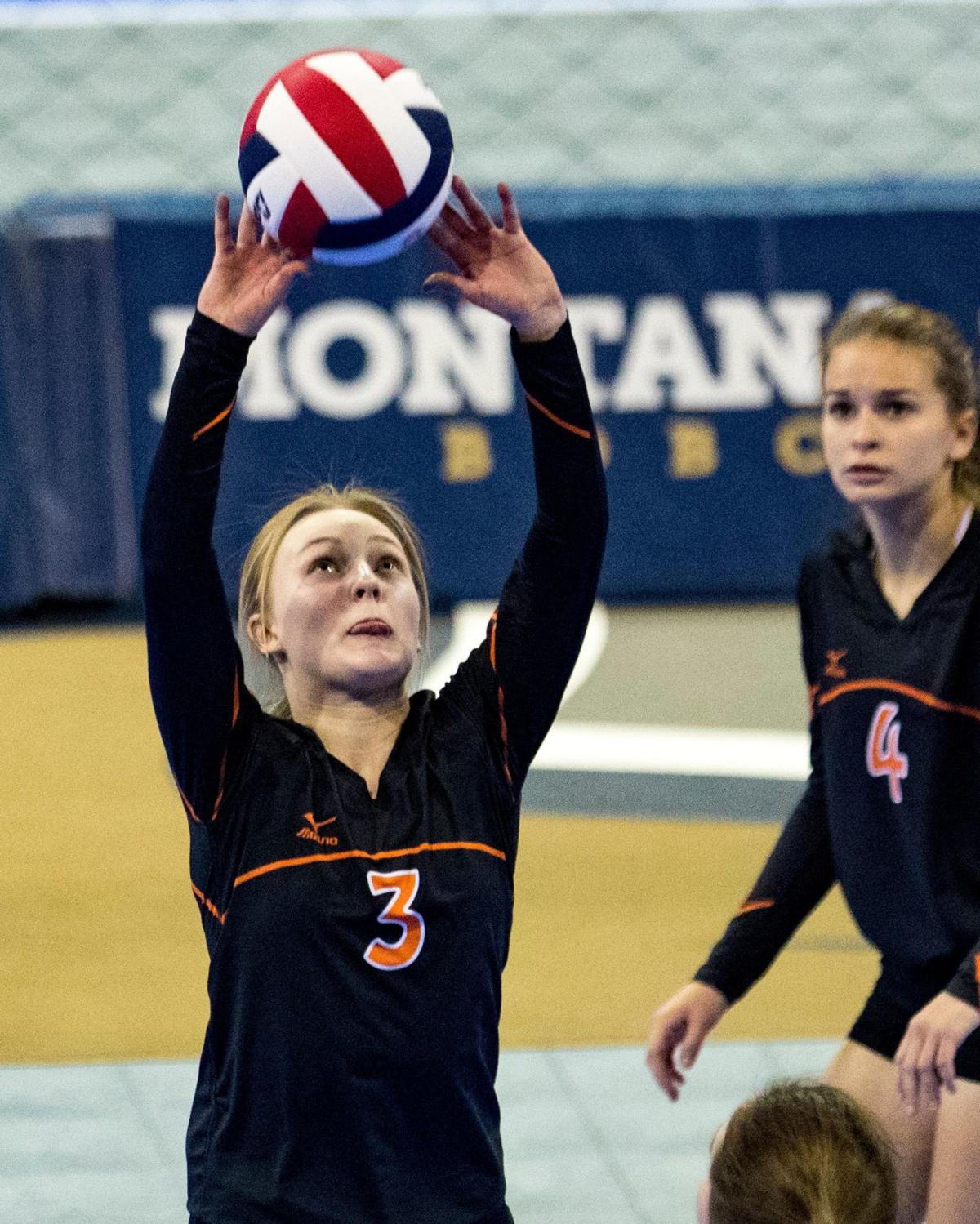 Plentywood's Ashtyn Curtiss (3) sets the ball during the Belt Huskies' first round match against the Plentywood Wildcats in the Class C State Volleyball Tournament at Montana State University's Brick Breeden Fieldhouse in Bozeman on Thursday, November 14, 2019. 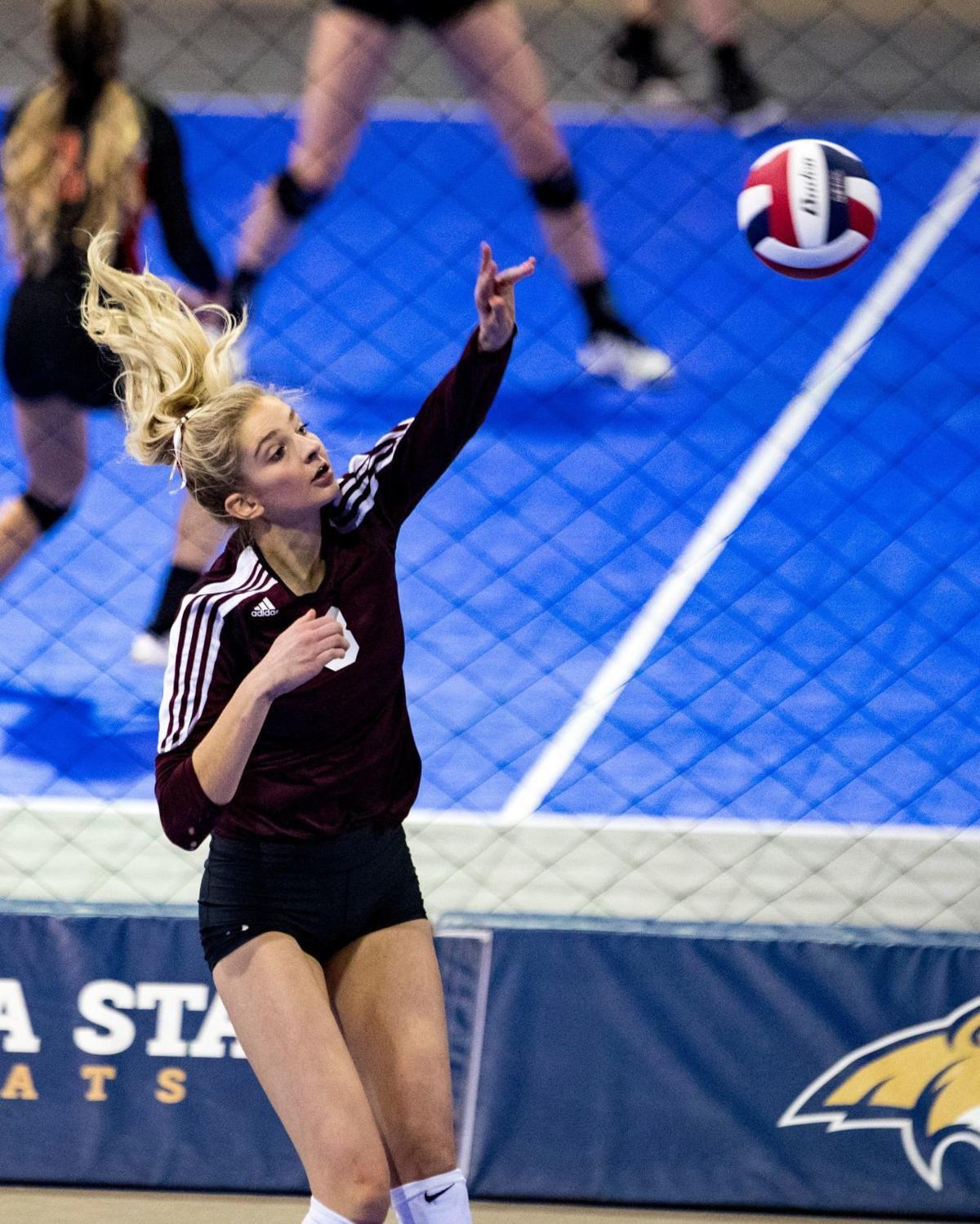 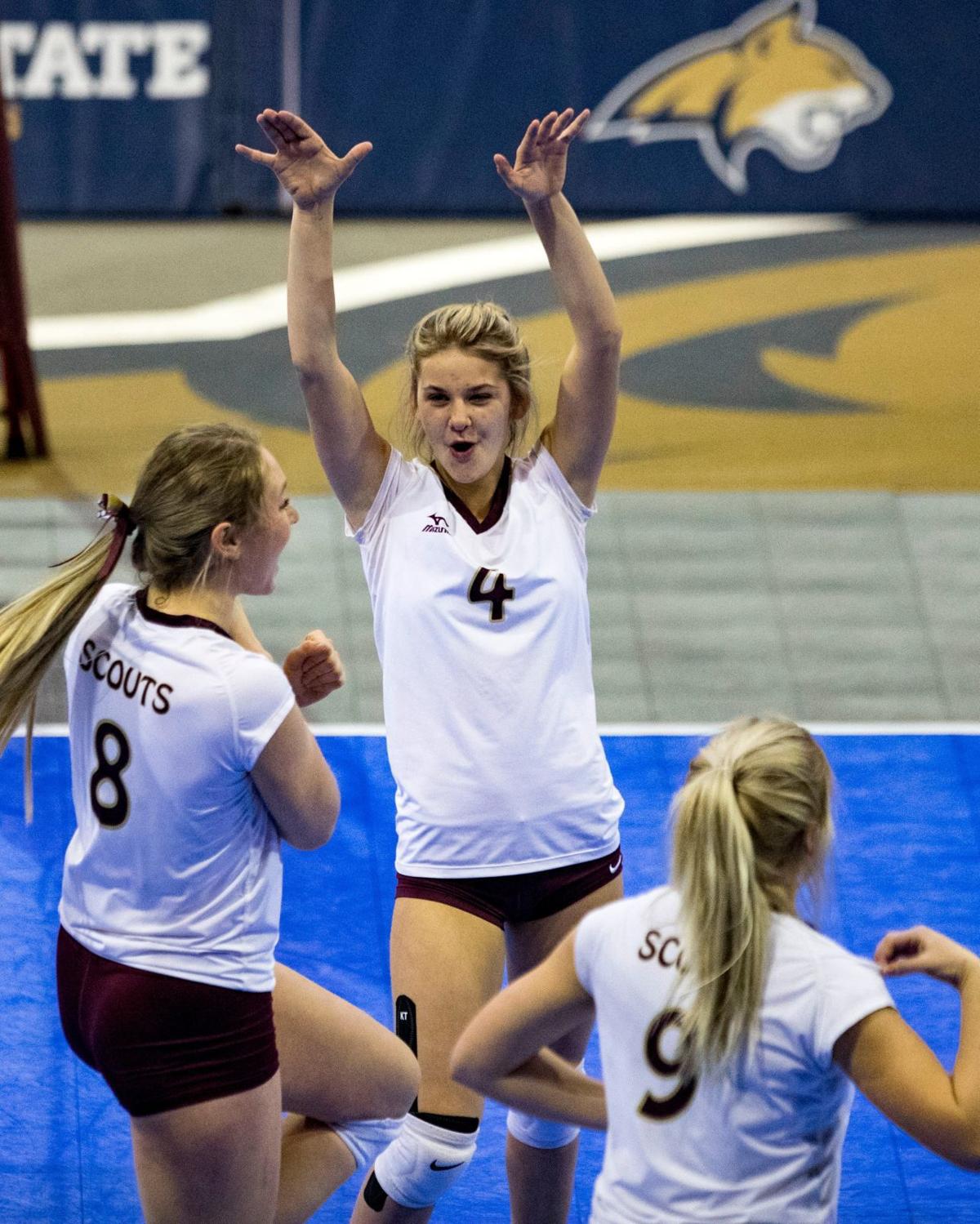 Bridger's Kyndra Reichart (4) celebrates with her teammates after a point during the Bridger Lady Scouts' first round match against the Westby-Grenora Thunder in the Class C State Volleyball Tournament at Montana State University's Brick Breeden Fieldhouse in Bozeman on Thursday, November 14, 2019. 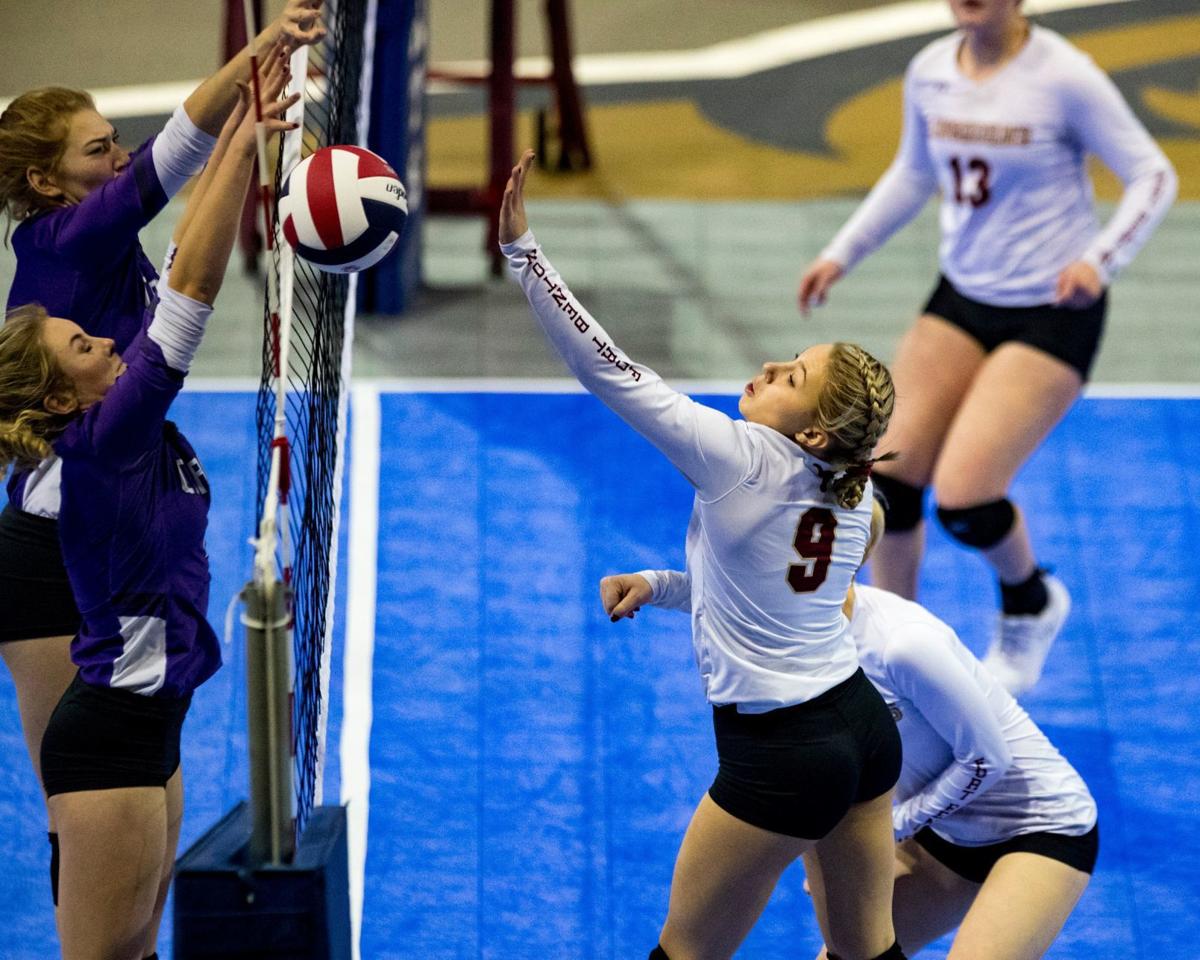 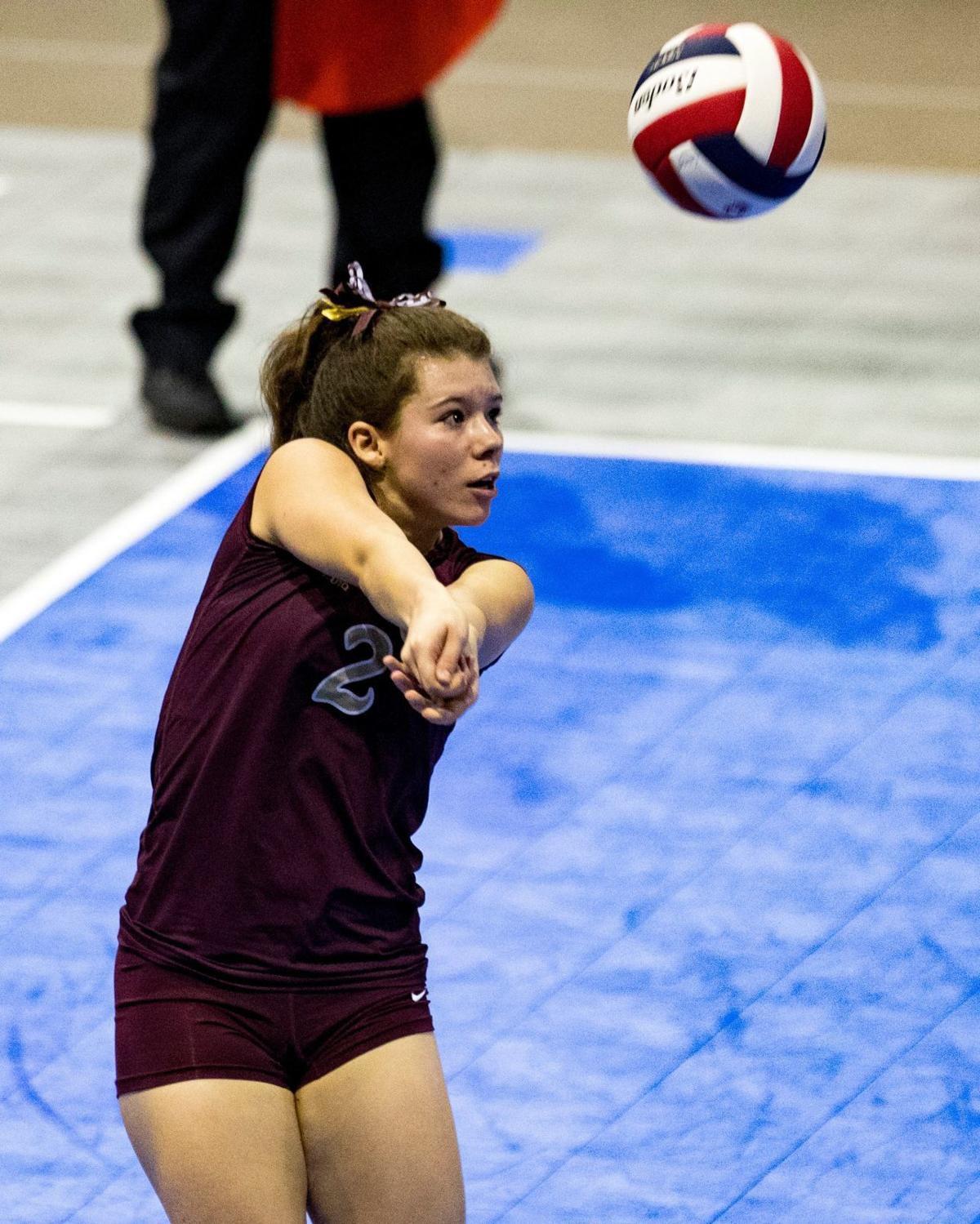 Plentywood's Ashtyn Curtiss (3) sets the ball during the Belt Huskies' first round match against the Plentywood Wildcats in the Class C State Volleyball Tournament at Montana State University's Brick Breeden Fieldhouse in Bozeman on Thursday, November 14, 2019.

Bridger's Kyndra Reichart (4) celebrates with her teammates after a point during the Bridger Lady Scouts' first round match against the Westby-Grenora Thunder in the Class C State Volleyball Tournament at Montana State University's Brick Breeden Fieldhouse in Bozeman on Thursday, November 14, 2019.

Yet, Thursday night, at the Brick Breeden Fieldhouse in Bozeman, the Scouts ensured their workload Friday would be much less this time around, sweeping Fort Benton 25-17, 28-26 and 25-20 to earn a trip to the undefeated semifinals, where they will face Manhattan Christian.

"The idea that we can sleep in and relax is so nice," Emily Adkins said. "I think that will help us get rested and allow us to be able to play hard tomorrow (Friday)."

Adkins had a huge role in helping the Scouts push past the Longhorns, who nearly evened things up in the second set before Bridger prevailed with a two-point win. In the third, the Scouts won by five to wrap up the win.

For her part, Adkins stuff the stat sheet, finishing with 14 kills, three aces and 13 digs. Jenna Kallevig also had a big night with three aces, six kills and a block.

Bridger will take on Manhattan Christian for a berth in the Class C state title game Friday night at 6 p.m. Fort Benton will turn around and play at 2 p.m.

The Manhattan Christian volleyball team had a goal to get through to Saturday at the Class C state tournament.

But after rallying for a 3-1 win over Plentywood, the Eagles have bigger goals in mind, such as winning the state championship.

"We are definitely hoping to get that state championship trophy," Eagles star Kiersten VanKirk said. "That has been our goal all season long."

VanKirk certainly did her part to make that dream a reality. She finished the quarterfinal match against Plentywood with 20 kills, including a slew of them late as the Eagles rallied to close out the match in the fourth set.

"When you are 6-foot-2 and left handed, it's a big adjustment for blockers," Manhattan Christian head coach Jill Ayers said of VanKirk. "She got a little frustrated early but we got back to work and we started passing better."

The Eagles are guaranteed at least a top-3 finish. They will advance to the semifinals Friday night at 6 p.m. Plentywood will be part of loser-out action Friday at 4 p.m.

The Fort Benton Longhorns seem to have a flair for the dramatic.

They notched a dramatic win over Belt to take home the Northern C Divisional championship and the Longhorns did it again, winning an opening-round match in the Class C state tournament by the scores of 30-28, 22-25, 25-17 and 26-24.

The Longhorns pulled out an exciting win in the first set, then in the fourth, they trailed 24-22. However, four straight points ended the match and sent Fort Benton into the next round.

"We are a team that likes to come from behind," Fort Benton head coach Shana Diekhans said. "We like to dig ourselves a hole and that's when we seem to play better. We like a little pressure I guess."

Nicole Axtman was a spark plug throughout for the Longhorns and she routinely scored some key kills, including one in the fourth that tied the set at 24-24, before Fort Benton scored the last two points to clinch the win.

Axtman finished the match with an incredible 21 kills, as well as 19 digs. McKenzie Clark also had a solid outing with 18 kills, three blocks and one ace.

The Longhorns will advance in the winner's bracket and will take on Bridger at 8 p.m. Charlo will be back in action Friday at 12 p.m.

Bridger sweeps MonDak in the opening round 3-0

The Bridger Scouts have been a familiar presence for a long time at the Class C state volleyball tournament. Only this time, they did it with a new head coach.

And even though the legendary Wayne Moorman wasn't on the sidelines Thursday at the Brick Breeden Fieldhouse in Bozeman, the results were exactly what you'd expect as the Scouts rolled to a 3-0 win over Westby-Grenora, giving new head coach Lena Kallevig her first state tournament win.

"I pretty much try to follow his (Moorman's) philosophy," Kallevig said after her team's win. "You know, I learned from the best."

The Scouts certainly looked comfortable on the state tournament floor, even after a sluggish start that saw them win the first set by just two points, 25-23.

However, the next two were much more lopsided as Bridger won 25-11 and 25-16 to close out the sweep.

Emily Adkins was stellar for the Scouts as she wound up with 18 kills and 10 assists. Jenna Kallevig also added 12 kills, one ace and 11 digs in the win.

Jenna Rust was formidable in the loss for Westby-Grenora and she finished with 13 kills and an ace. Samantha Ledahl also had 15 digs and two blocks.

Bridger will turn around and take part in another matchup at 8 p.m. against either Fort Benton or Charlo, while Westby-Grenora will play in loser-out action Friday at 10 a.m.

Manhattan Christian is no stranger to the Class C state volleyball tournament and in the opening round Thursday, the Eagles looked right at home.

The Eagles stormed out of the gates against Roy-Winifred and rolled to a 25-10 win in the first set. Manhattan Christian also won the second 25-12, before the Outlaws took the third 25-19. But it didn't slow the Eagles down who captured the fourth set 25-15 to earn the 3-1 win and advance.

"We are used to being here," Manhattan Christian head coach Jill Ayers said. "We came out confident and played well. Anytime you can get a win in the first match of a tournament and get those jitters out of the way, it's important."

Roy-Winifred got eight kills from Dyauni Boyce, who also pitched in with four blocks for the Outlaws who will play again Friday at 10 a.m.

The Eagles will be in action again Thursday night against Plentywood at 6 p.m.

"They are a tall team," Ayers said. "We will have to work around blocks. They don't run anything to out of the ordinary, so we just play well and play like we coach them, it should be great."

The Plentywood volleyball program doesn't have a long history of success at the state tournament.

"Well for us it was the first state win," Kukowski said. "I believe ever and so we are obviously excited about that. The girls started a little slow, that has been our trend all year but then we got on a roll and started to play our game."

After dropping the first set by 11 points, the Wildcats edged out the defending state champions in the second set by two points, then basically led wire-to-wire in the third and fourth sets to seal the victory.

Liv Wangerin was stellar for Plentywood in the first-round win, registering 18 kills and three blocks. Donn Longan also contributed with 14 kills and 13 digs.

On the Belt side of things, the Huskies were led by Kyelie Marquis who totaled 12 kills and 17 digs in defeat. Kolby Pimperton added 30 assists and an ace. Shelby Paulson also pitched in with 4 blocks.

Plentywood will be back in action tonight at 6 p.m. Belt will play again at 10 a.m. Friday, needing a win to avoid elimination.

This gallery will be updated throughout the day.