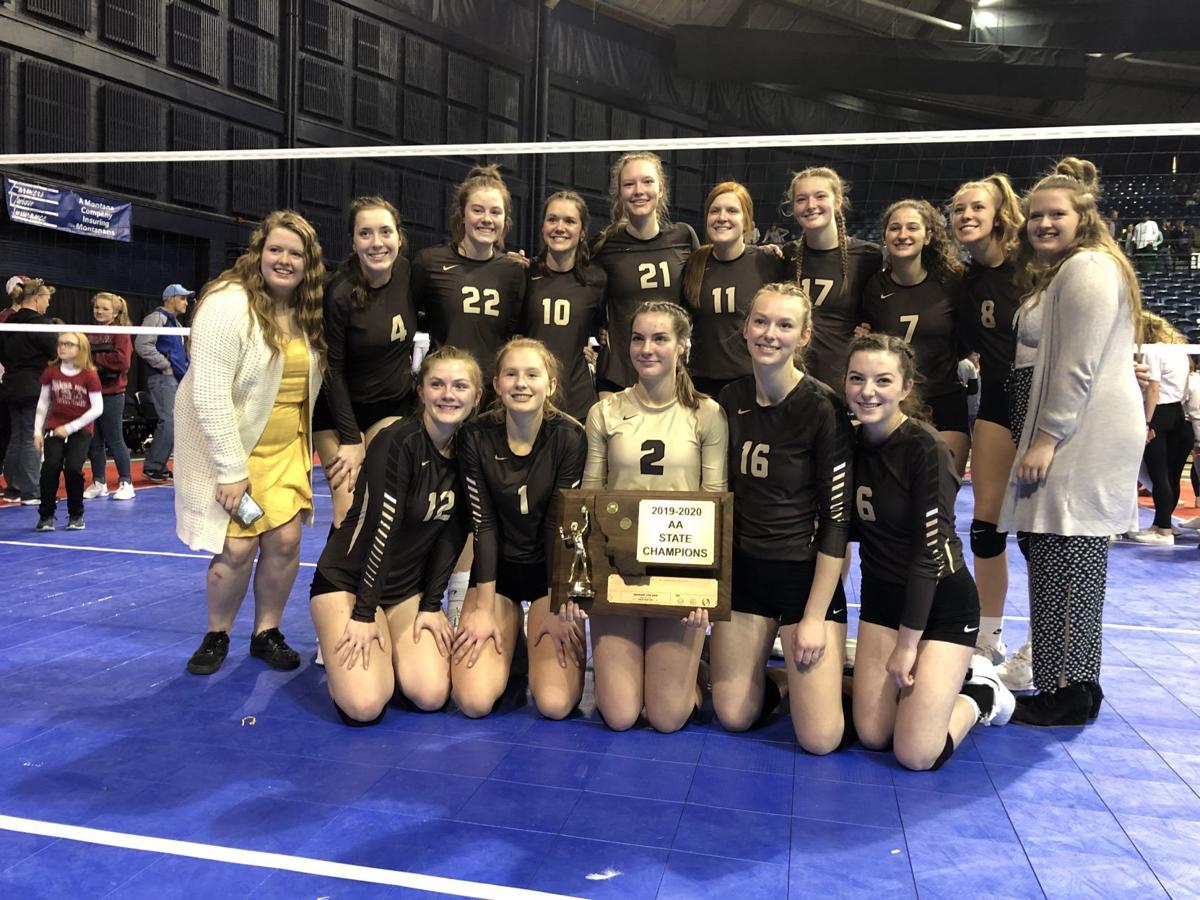 Helena Capital poses for a team picture with the Class AA state trophy. 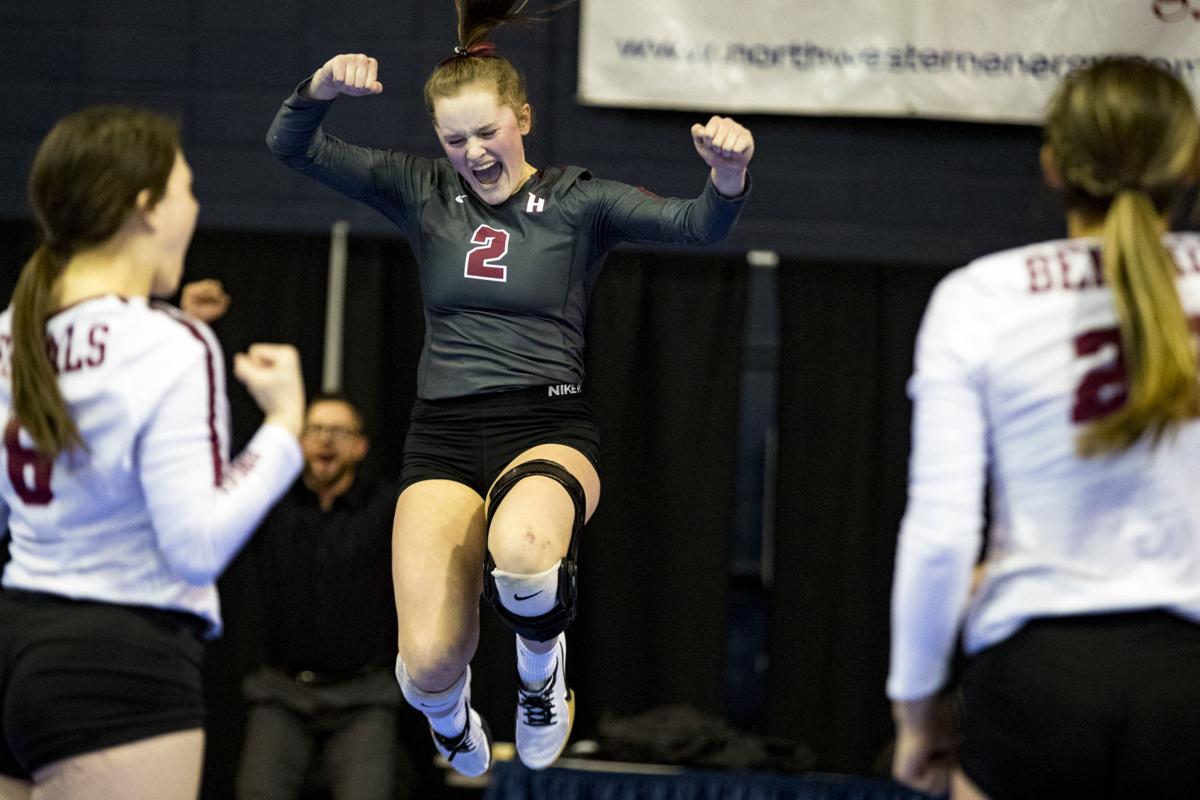 Helena's Haydin Henschel (2) celebrates after a point during the Helena Bengals' loser out semifinal match against the Great Falls CMR Rustlers in the Class AA State Volleyball Tournament at Montana State University's Brick Breeden Fieldhouse in Bozeman on Saturday, November 16, 2019. 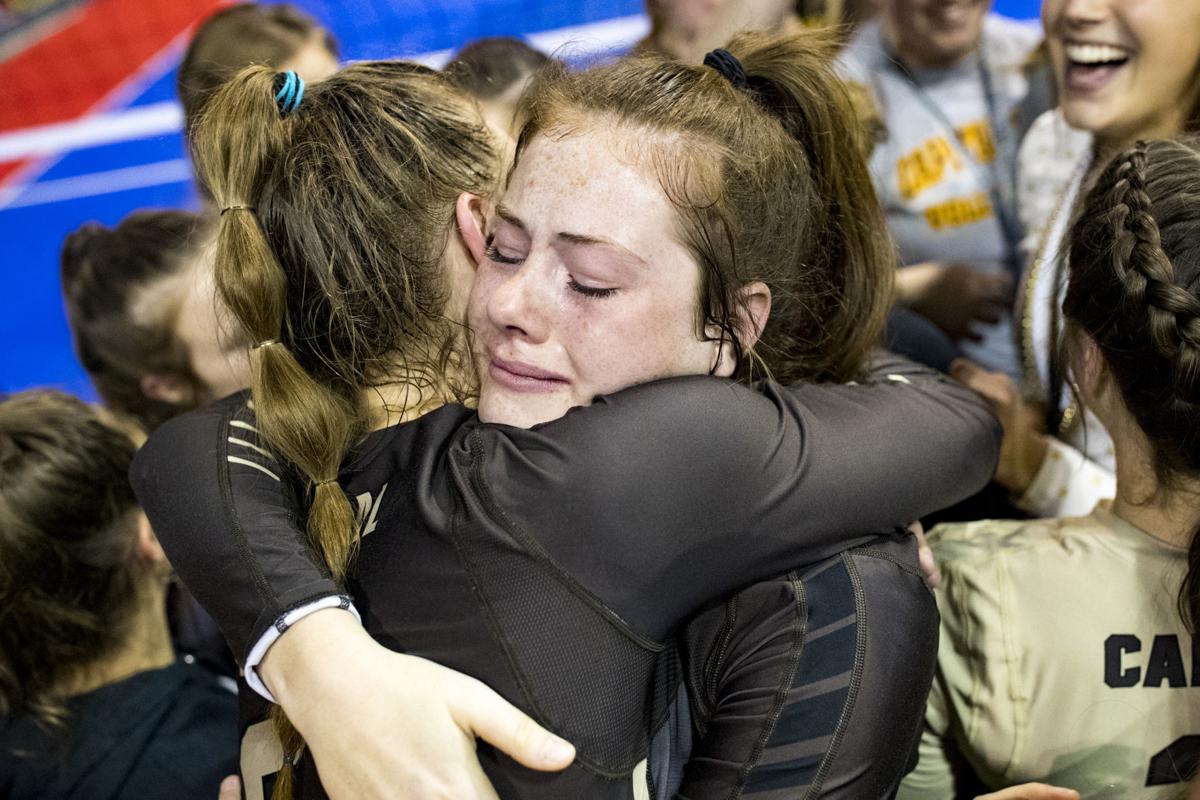 Helena Capital poses for a team picture with the Class AA state trophy.

Helena's Haydin Henschel (2) celebrates after a point during the Helena Bengals' loser out semifinal match against the Great Falls CMR Rustlers in the Class AA State Volleyball Tournament at Montana State University's Brick Breeden Fieldhouse in Bozeman on Saturday, November 16, 2019.

BOZEMAN - All season long, Helena Capital has been a team on a mission and Saturday, inside the Brick Breeden Fieldhouse in Bozeman, the Bruins completed their objective.

Facing their crosstown rival, Helena High, in the Class AA state championship, the Bruins notched a 26-24 win in the first set, then won the second and third 25-13 and 25-18 to win a second consecutive state title.

"This is an amazing feeling," Dani Bartsch said. "This is what we have been working towards for about a year now and I just love being able to share this with my teammates."

As usual, the Bruins were led by their dominating trio of hitters that includes Dani and Paige Bartsch, as well as senior Sarah Ashley.

Ashley, who is going to play for the Lady Griz next year, drilled home the championship point in the third set, giving Capital's all-time leader in kills, a perfect ending to a perfect season.

"It was pretty sweet," Ashley said. "Audrey (Hofer) was like Sarah, let's run this next play to you. It was pretty cool to end my career on that note."

"It was so exciting," Paige Bartsch said of the championship match. "I think it was even more exciting than last year with it being a crosstown matchup."

On the undefeated season, Bartsch said: "It's really cool but it doesn't mean that much to me, it just means we worked really hard. The state championship is what I wanted."

"It feels great," Hofer said. "And it's so fun to share it with this group of girls. A lot of teams are close, but we have a great bond, on and off that court and that makes it even more special."

Helena High put forth a solid effort, winning four straight matches to reach the title game after losing the opener to Billings Senior.

But in the end, the Bengals ran out of gas.

"This team gave absolutely everything they had," Helena High head coach Lindsey Day said. "They had nothing left and I couldn't be more proud of them. They have shown signs of greatness all season and it was great to see them put it together for this run."

"Capital is a great team," Day said. "And you have to be at your best to compete with them."

That was true all season as not only did the Bruins not lose a match, they weren't even taken to five sets.

"I thought this team rivals last year's team," Capital head coach Rebecca Cleveland said when asked if it was the best Bruins team ever. "Both teams had strengths and had to overcome challenges. But we have a great group of girls. It was an honor to coach both teams and we are also very excited about the future."

With players like Paige and Dani Bartsch returning, along with Audrey Hofer, Cleveland should be excited about the future.

Can you say three-peat?

At one point Friday, when the Helena High Bengals were down 2-0 to Billings West, a berth in the Class AA state title match was the furthest thing from anyone's mind.

But after a dramatic comeback to knock off the Golden Bears, the Bengals have been on a roll. They won six of seven sets to close out Friday and Saturday morning, in the second semifinal Saturday morning, Helena rolled past CMR, sweeping the Rustlers 25-19, 25-21 and 27-25 to advance to state championship match against Helena Capital.

"This feels amazing," Helena High's Abby Marcille said. "I am so proud of all these girls. We just never gave up hope, we kept fighting and we just wanted to keep playing."

Marcille did her part for the Bengals finishing with 12 kills. Elizabeth Heuiser was also stellar for Helena High with 13 kills and two blocks. Emily Feller pitched in with 42 assists.

Allie Olsen led the way for CMR with 20 kills and three blocks. The Rustlers, who finished the season with three losses ended up in third place.

Helena High, on the other hand, is guaranteed to finish at least second and they will get another shot at Helena Capital, a team that beat the Bengals twice during the regular season.

Since Helena Capital made it to the final undefeated, Helena High would need to win twice to win the title.

"I love that we get another chance against Helena Capital," Marcille said. "We are good friends with the so it should be a lot of fun."