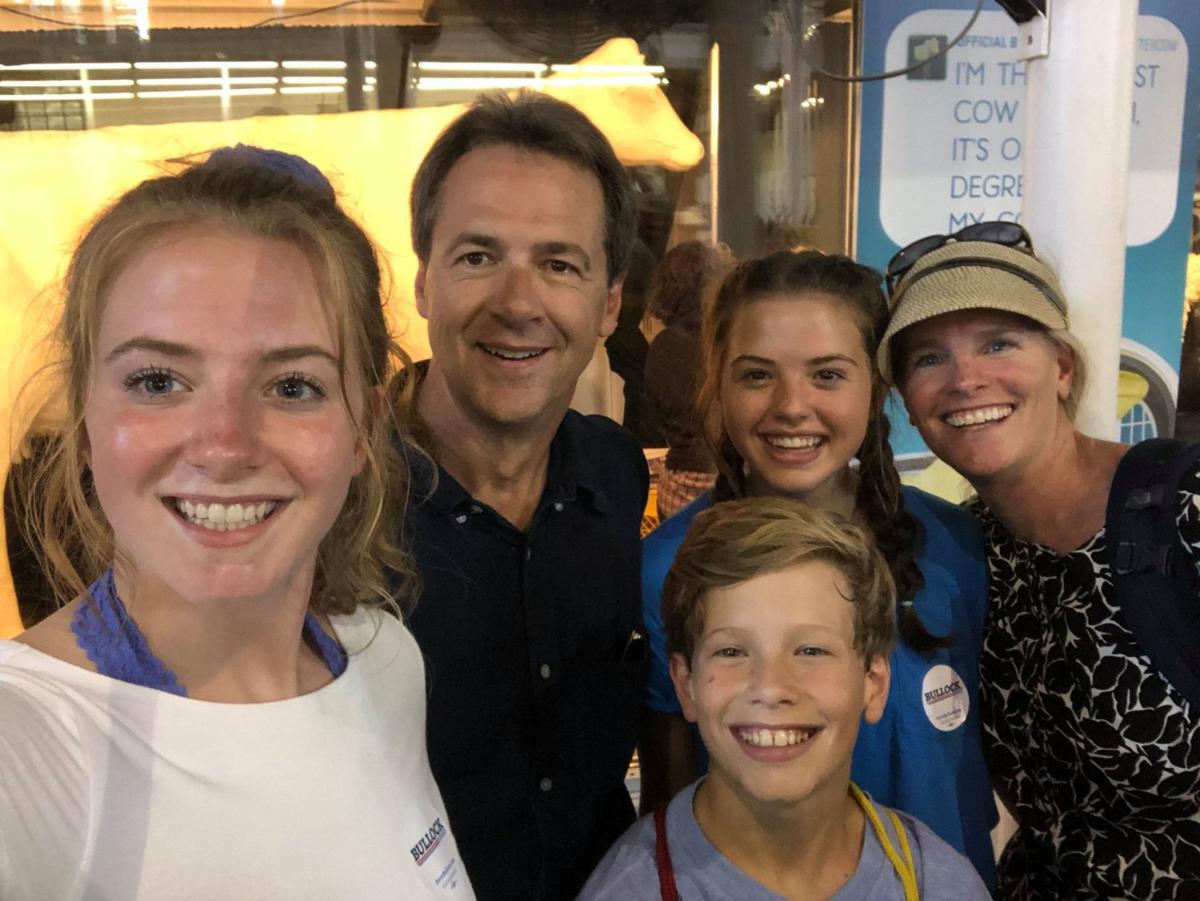 Montana Governor Steve Bullock and his family pose for a photo during a campaign trip in Iowa. 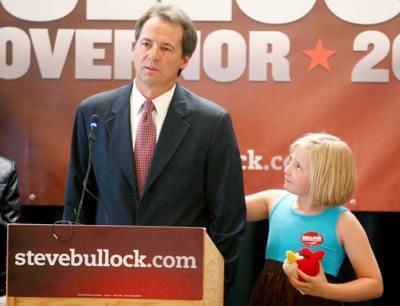 Steve Bullock is pictured with Caroline as he announces his first run for governor. 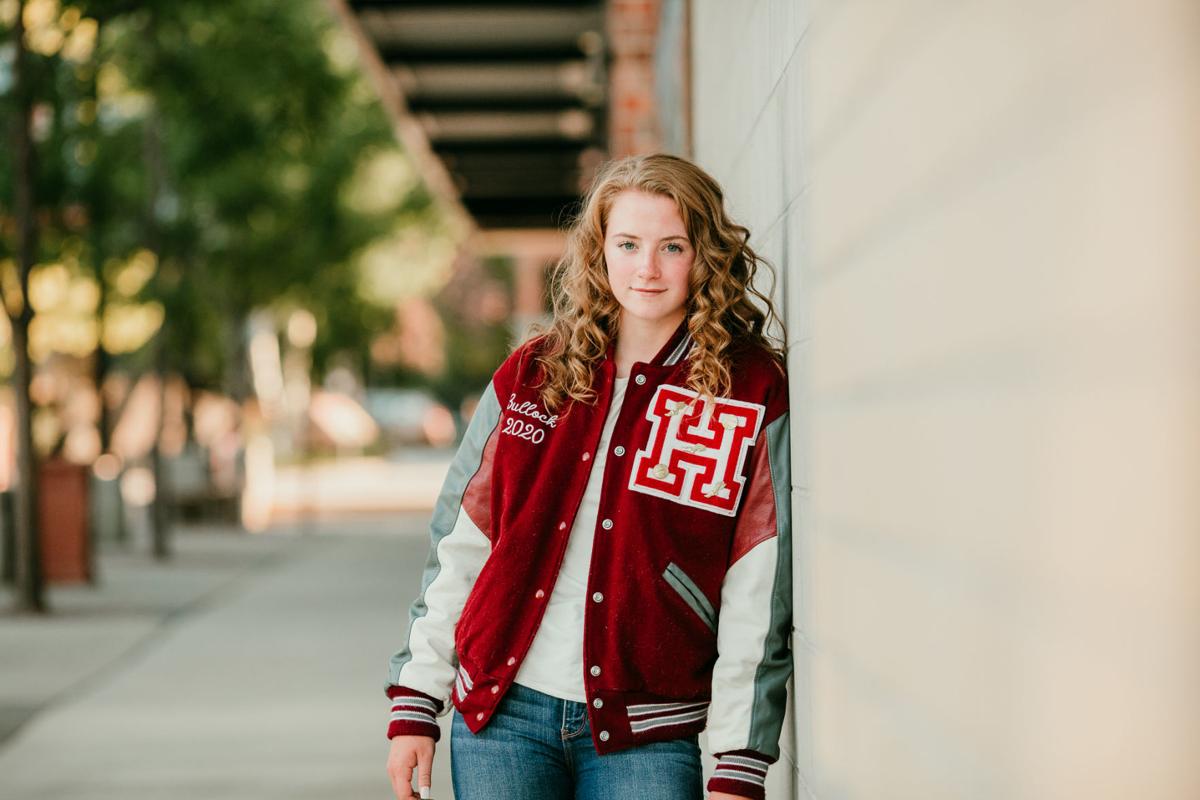 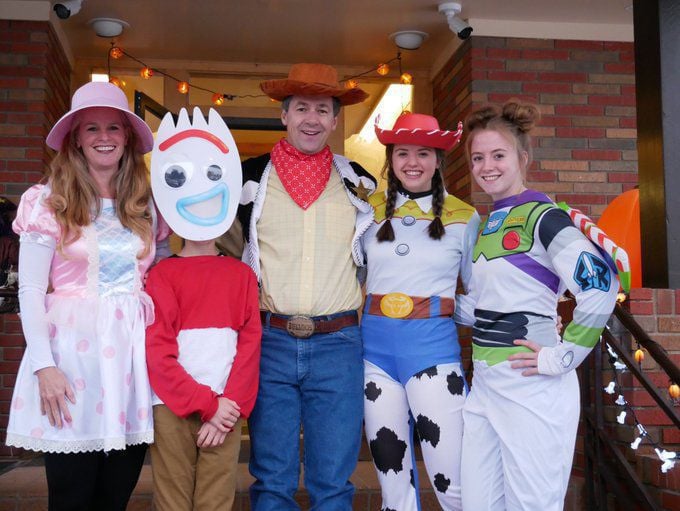 The Bullock Family poses for a photo this Halloween. 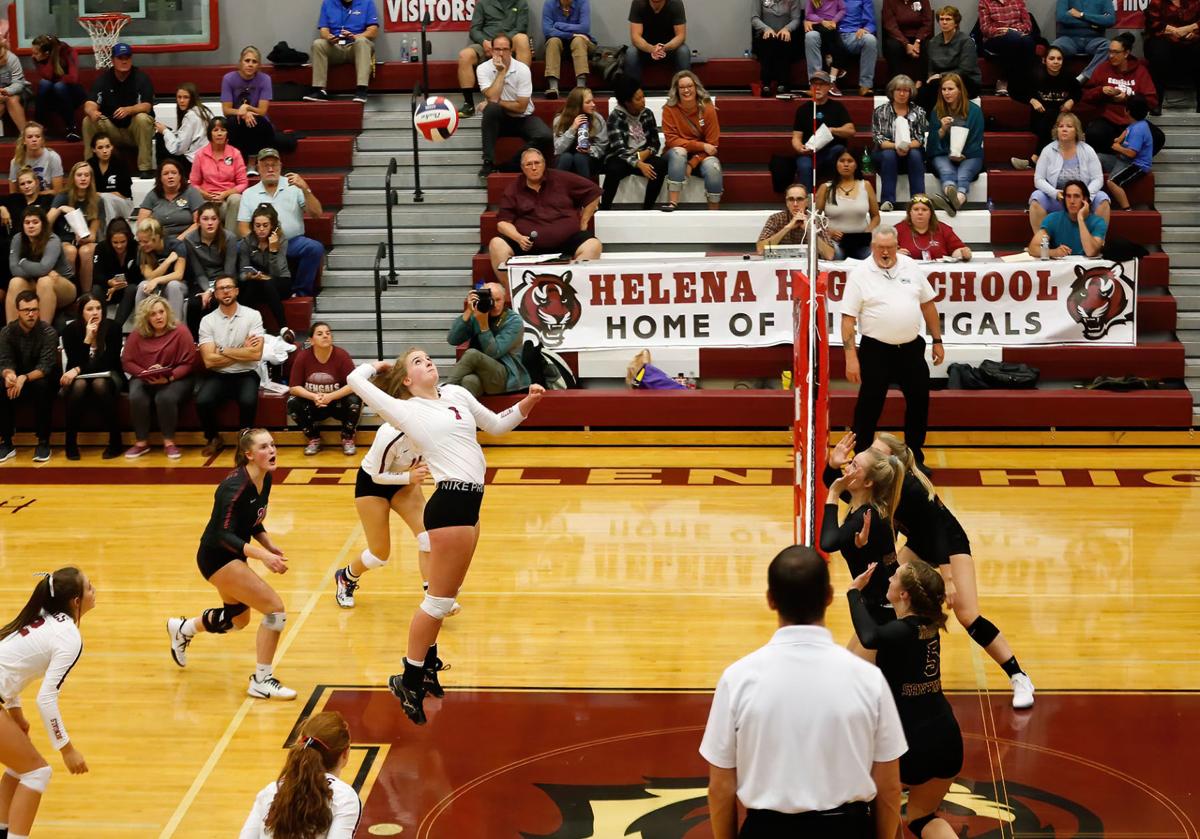 Helena High's Caroline Bullock gets ready to hit a ball in a match earlier this season. 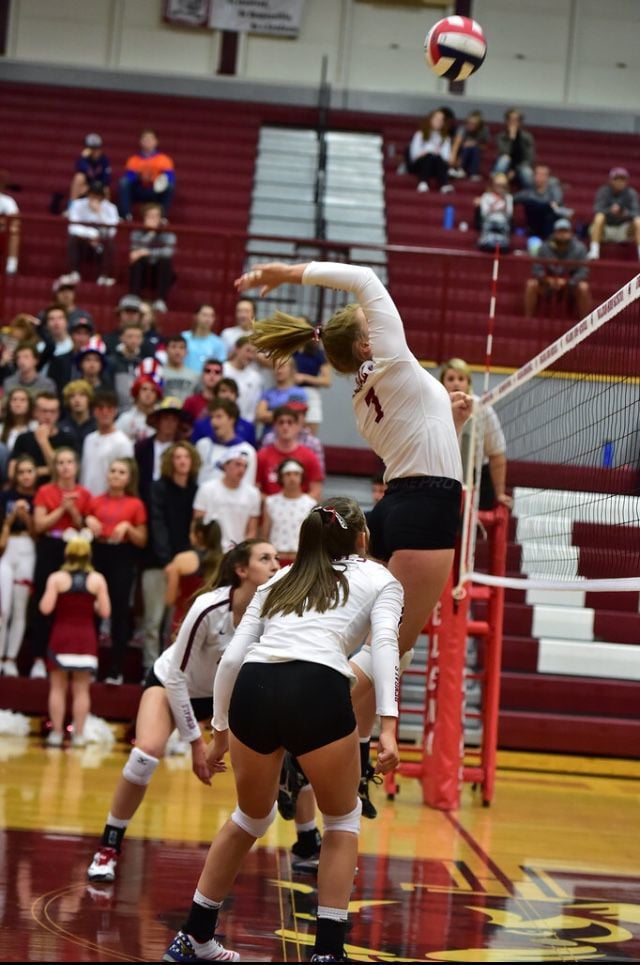 Caroline Bullock swings to hit a volleyball for the Helena High Bengals earlier this season. 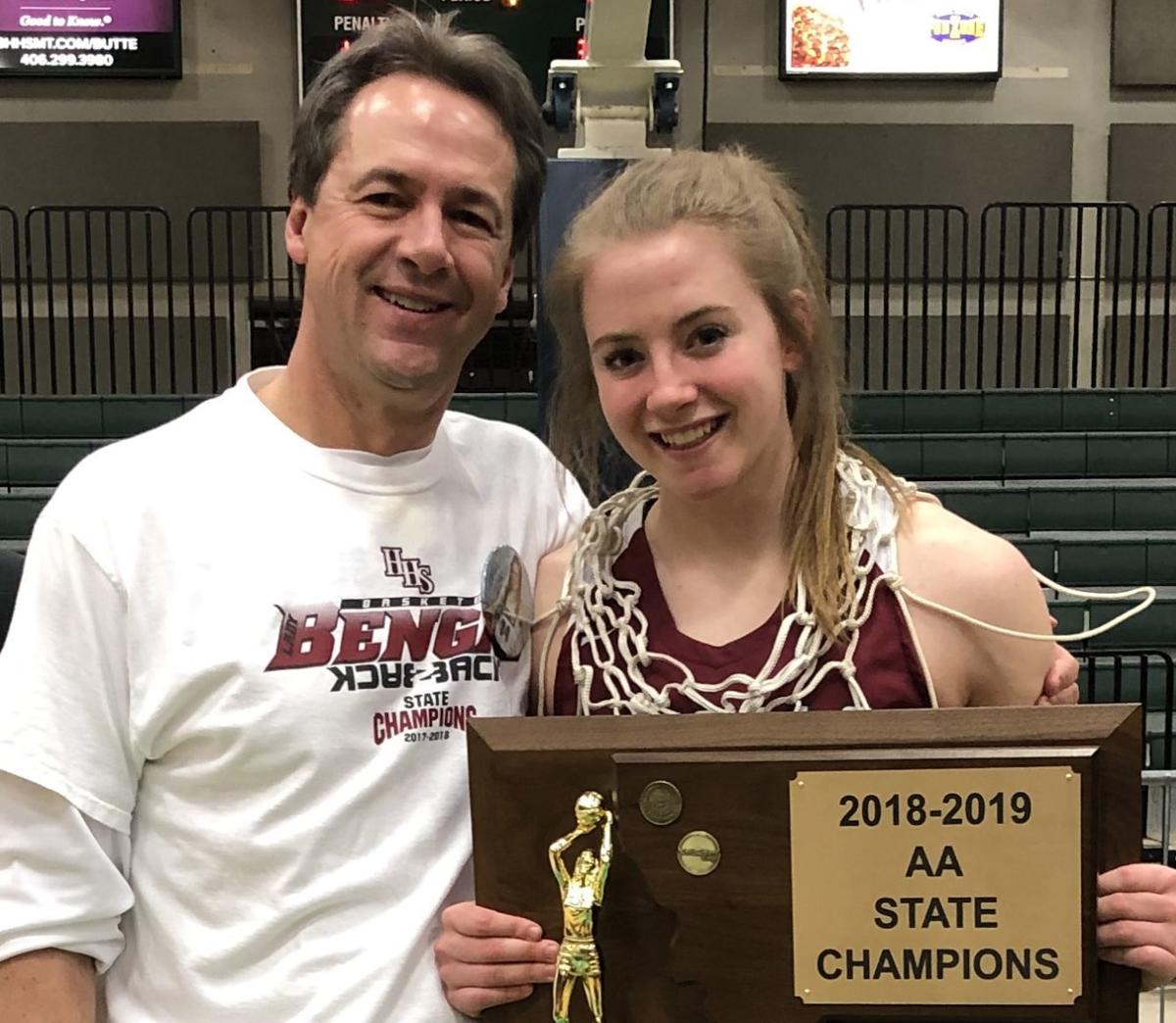 Steve Bullock poses for a photo with his daughter, Caroline Bullock while she is holding the 2018-19 Class AA girls basketball trophy. She was a member of the Bengals team that won the state championship last March.

The Helena High senior is a three-sport athlete, National Honor Society member and volunteers in her community tutoring elementary students among numerous other activities.

Oh, and her dad, Montana Gov. Steve Bullock, is running for president of the United States.

“When I was in kindergarten, I wanted to be president, so I kind of think he stole the dream from me,” Caroline jokes. “But I think it’s really cool. It’s great to see him pursue his dream and he’s definitely an inspiration to me. I’ve learned that I can try and do anything I want to.”

In fact, it’s likely that Caroline is the only high school athlete with a title like "Executive Campaign Manager for Stevie B" – at least, according to her Twitter account.

And while her dad is traveling the country in an effort to lock up the Democratic Party nomination, Caroline has been riding shotgun on his campaigns almost from the beginning.

“Since she was 7, I have been in the public eye,” Gov. Bullock said. “She introduced me the first time I ran for governor and she would regularly give me tips on how I did and I still get that from her.”

Of course, now her father is reaching a wider audience. It isn't unusual to see him on cable news or campaigning in Iowa.

“It’s still a little weird at times seeing him on there,” Caroline said of the TV interviews. “I will definitely call him after and tell him what he can do better.”

At times, she has even joined him on the campaign, such as in Iowa, which has led to some eye-opening moments, even for a political veteran like Caroline.

“It’s definitely surreal,” she said. “When I was in Iowa, I saw all these candidates and my jaw dropped. I thought, 'Oh my gosh, there’s Pete (Buttigieg) or there’s Kirsten (Gillibrand), there is everyone', and that’s really cool.

“It’s also really cool to think that some people's jaws drop when they see my dad.”

One place where jaws don’t drop is when Steve Bullock goes to Helena High to watch his daughters Caroline and Alex play volleyball.

In that arena, he’s just another parent.

“It’s exciting to get to see her out there,” Bullock said. “And one of the other parents said to me, ‘Not to be disrespectful or anything, but I don’t even think of you as the governor. I think of you as Caroline’s dad’ -- and it's the best compliment a guy could ever have.”

While his daughter stands out with her effort and enthusiasm, her dad blends in, enjoying a break from the rigors of his day job and campaigning for the highest office in the land.

Even if making it to her games isn’t always easy.

“It’s great,” he said of watching Caroline play. “And usually, before we started this president thing, I would schedule my work schedule around her. But with senior night, I think I got about three hours of sleep because I was in Iowa. But it’s great, because here I am nothing more than Caroline’s dad. That’s how her teammates think of me and that’s how most of the people here think of me.”

Caroline’s teammates have even adopted her nickname for him -- Stevie B.

“They have all started calling me Stevie B, you know her teammates,” the governor said. “And that makes it really fun. It’s just been a gift to watch her grow as a player.”

It has meant even more watching his daughters play sports at the same high school he did.

“When we announced this effort for president, we did it at Helena High,” Steve Bullock said. “Having our kids go to the same school that we went to and getting to sit in this gym and listening to the high school kids cheering, knowing on the one hand, that was a long time ago and on the other hand, it doesn’t seem that long ago.”

Like her father, Caroline has the ability to manage a busy schedule. That not only includes school and sports, but being a member of Helena High’s 3-7-77 club and the treasurer of the Health Occupation Student Association of America.

In addition, she volunteers at Bryant Elementary School and coaches basketball in a program that offers a free league to fourth and fifth graders piloted by Helena High boys coach Brandon Day.

While Caroline said she is still undecided about her future, in terms of college or career path, she does seem to have a way with kids.

“I have a special spot in my heart for Caroline,” Helena volleyball coach Lindsey Day said. “Just because of how she treats my children. I have an 8-year-old and a 10-year-old and their relationship is just so cute. They are best friends, they even have friendship bracelets.”

As easy as it is to admire Caroline for her efforts off the court, Day also appreciates what she has done on it.

“Her story is actually pretty cool,” Day said. “She didn’t start until she was a freshman, which is very rare. She’s just a good athlete and was able to catch up.”

It’s ironic that volleyball is now one of her favorite sports, along with basketball, considering she only started playing to avoid running cross country -- her dad’s sport in high school.

“It’s funny, I was always more into individual sports,” Steve Bullock said. “But I was in this same gym. I wrestled, was on a state championship cross country team and ran the half-mile. My wife, Lisa, played basketball, here and at Carroll, so that’s where the kids get their coordination. I was just a runner.”

Caroline tried cross country in middle school, mostly to stay in shape for basketball, she said. But she didn’t enjoy it and that meant giving volleyball a try.

“So the next year my dad said, ‘You are doing cross country right?’ And I said ‘Absolutely not.’ So I decided to jump into volleyball. I played it over the summer and went to a couple of camps but had never really played organized volleyball.”

It took some time, but Caroline was a natural fit, especially with her up-beat attitude.

“My persona as a volleyball player is my energy,” she said. “And all my energy comes from the idea that I am really grateful to be on this team and to play this sport. You never know when it will be over so you have to love it with all you have and give it everything.”

To those who have watched Caroline compete over the years, her spirit is nothing new.

“She has always been the most energetic,” her dad said with a laugh. “And she always had that, even when she was a freshman. The energy and the spirit she has just kind of lights up the team and it’s just fun to be part of that.”

As a parent or a child, time is fleeting. The Bullocks were reminded of that on Senior Day a couple of weeks back.

“It’s hard to think about,” Steve said. “It just has gone so quickly and you start hitting these markers along the way.”

One of those came on Halloween.

“For the last six years, we have given out candy on Halloween,” Steve said. “And this year I was supposed to be traveling. But Caroline said ‘Nope. This is my last year and you are going to be there.’ So it’s emotional and it’s emotional for her younger sister, too.”

Leaving home is never easy, but Caroline is ready to make her own path, one that’s a little farther from the spotlight.

“I used to say that Mars wasn’t far enough,” Caroline said. “And I am still following that direction.”

Said her dad: “I think that’s just part of being raised as the governor’s kid. Getting away from that sort of shadow.”

Being in the spotlight can be fun and adventurous. It can also be a lot to handle.

“It gets tiring,” Caroline said. “But I have also done it since I was 7. It’s always been there and as long as he continues this endeavor, it probably always will be.”

Just like no matter where she goes or what she does, Caroline Bullock will surely never be typical.