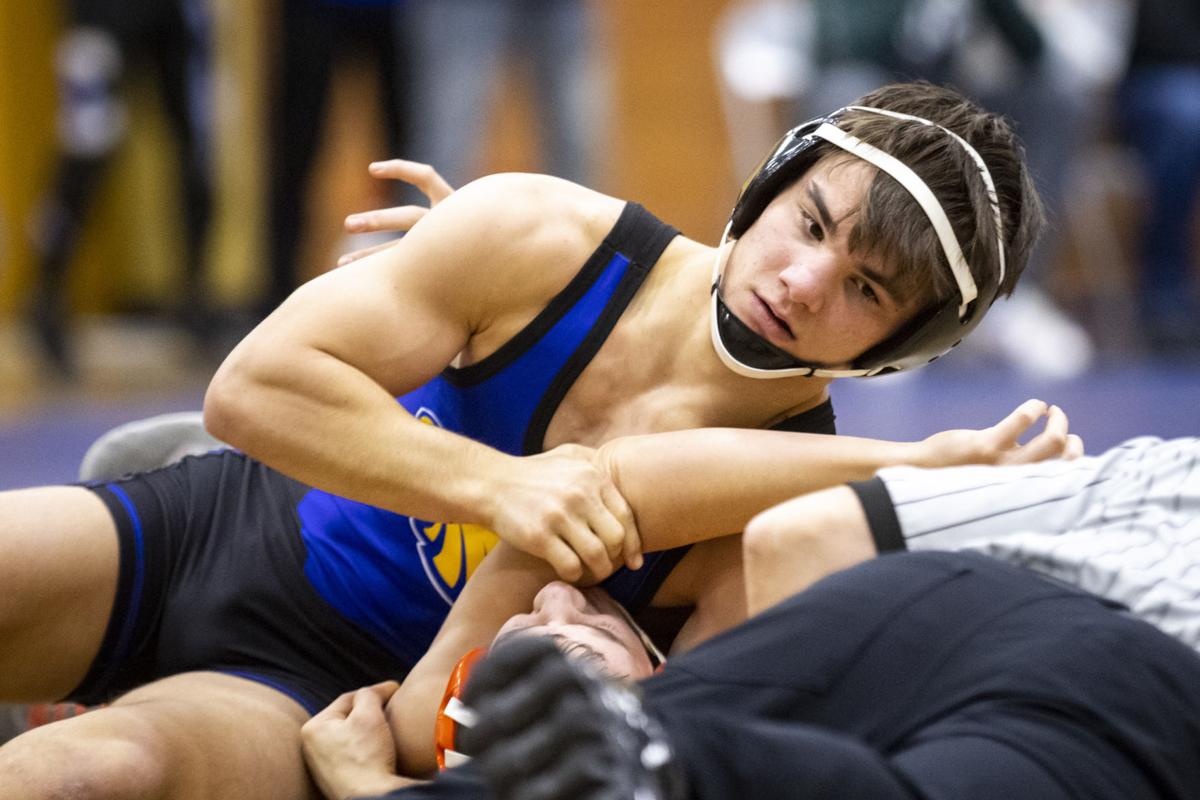 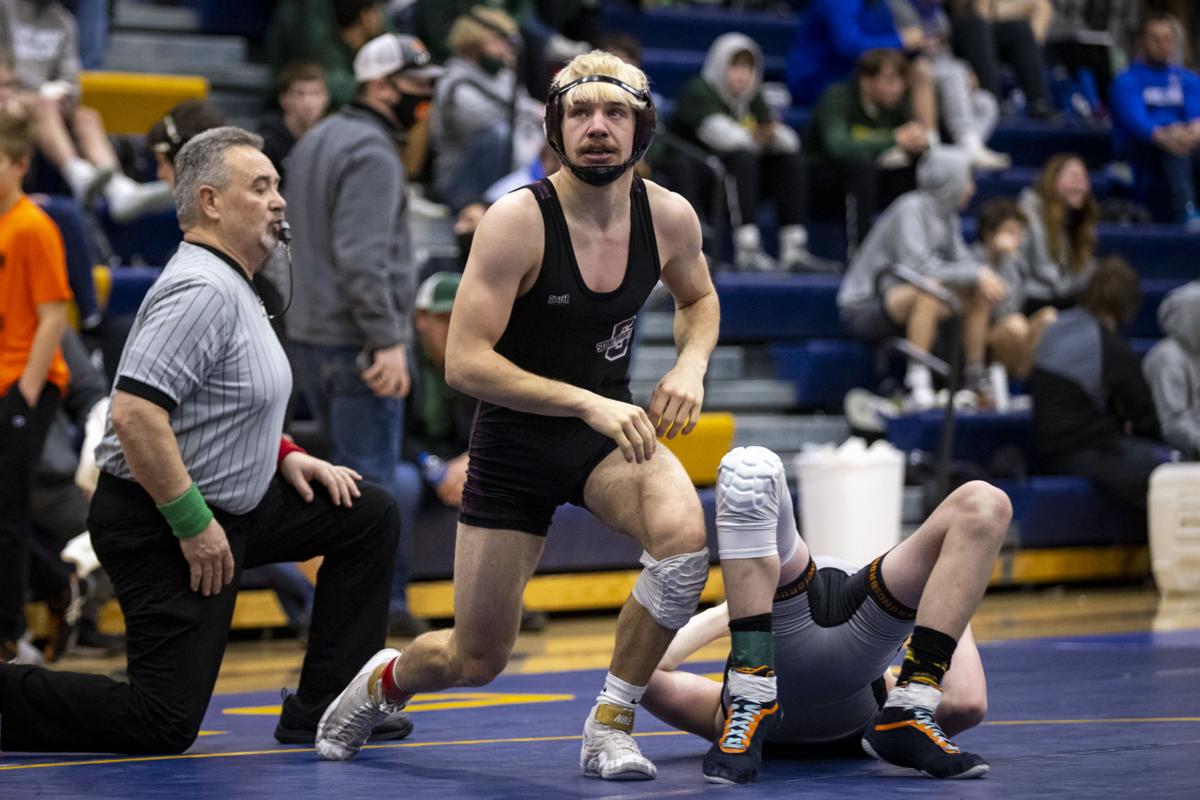 Sidney’s Kolton Reid stands up after winning his first round match on Friday at the Class A state wrestling tournament in Miles City. 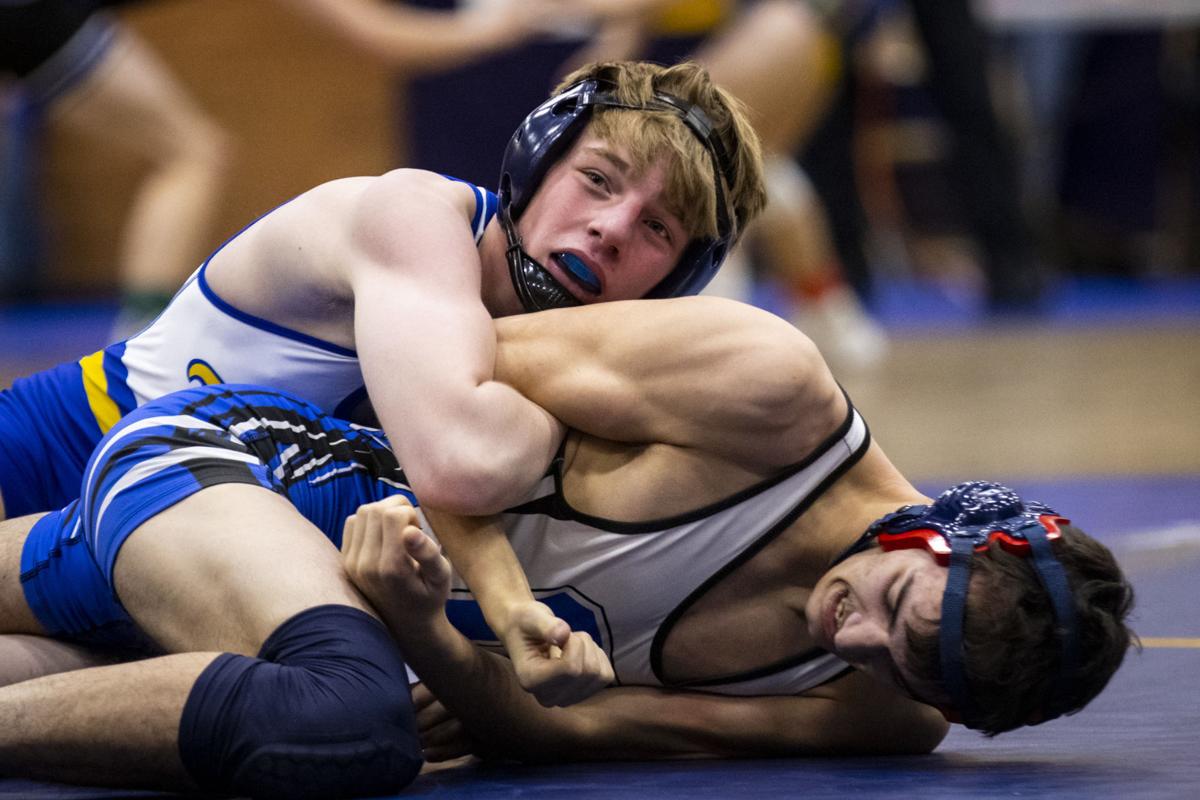 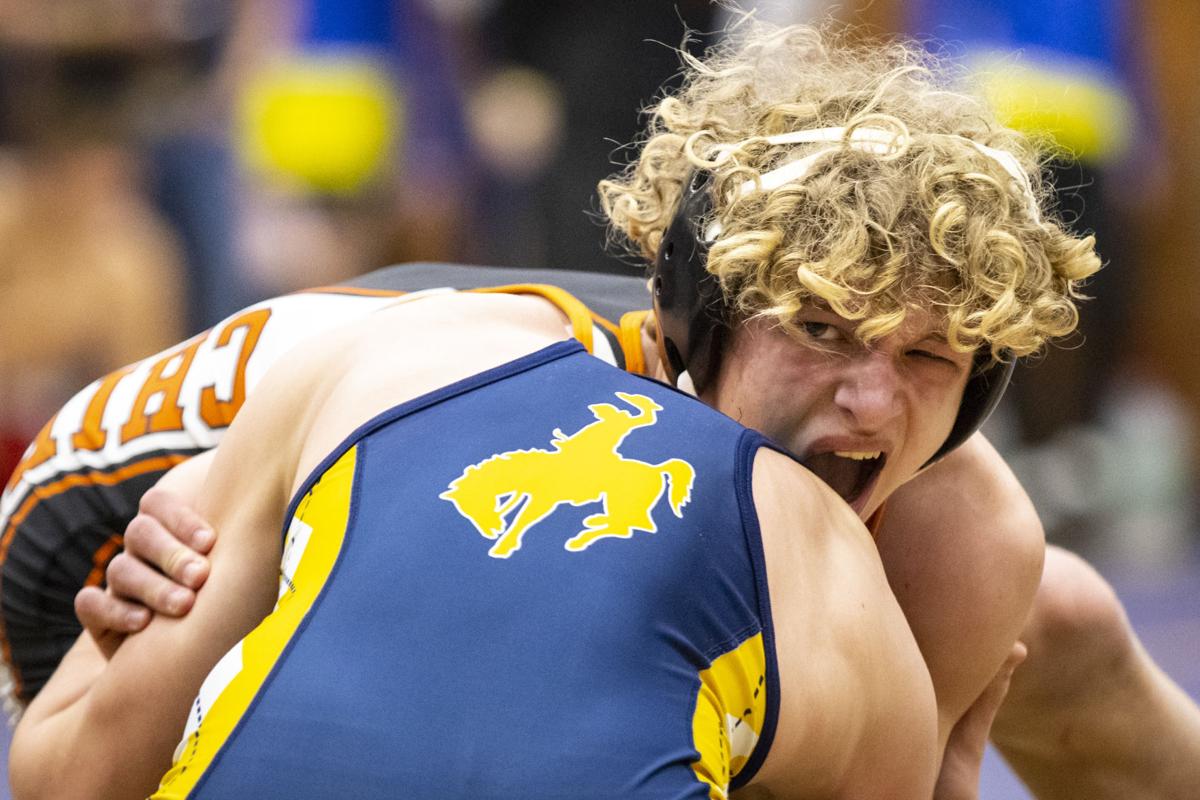 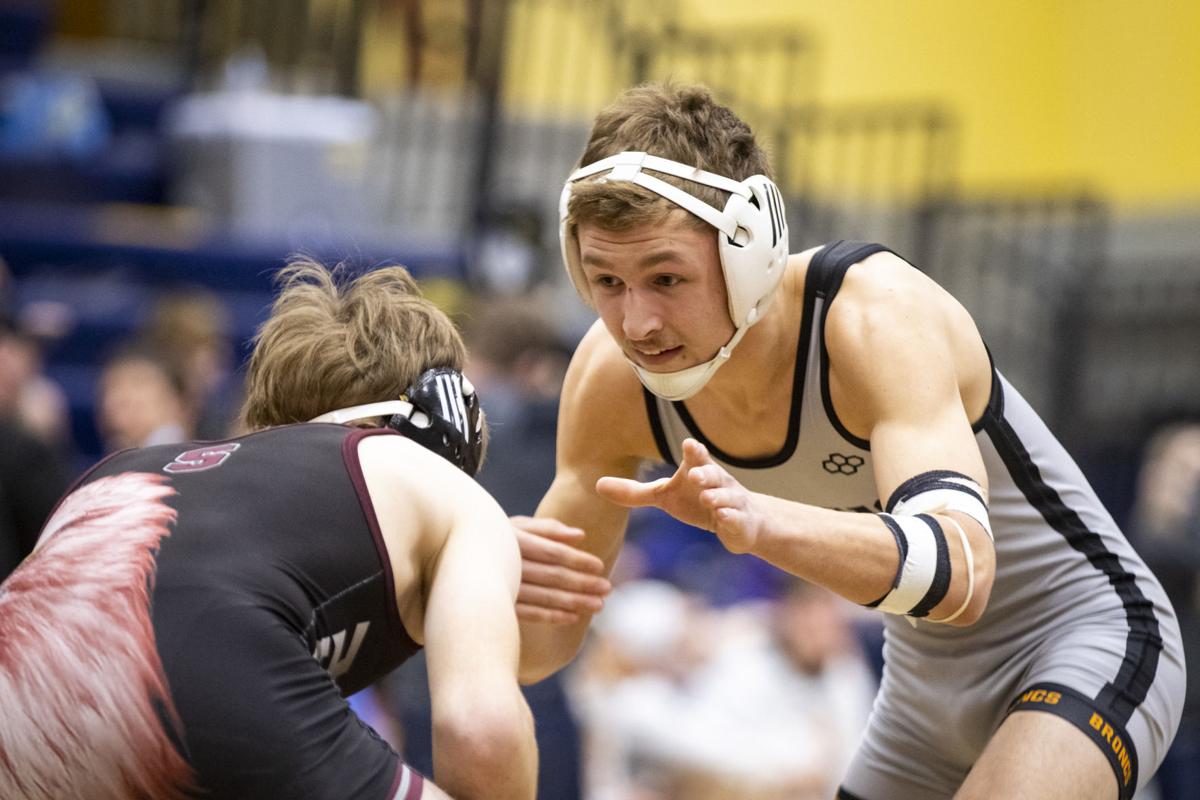 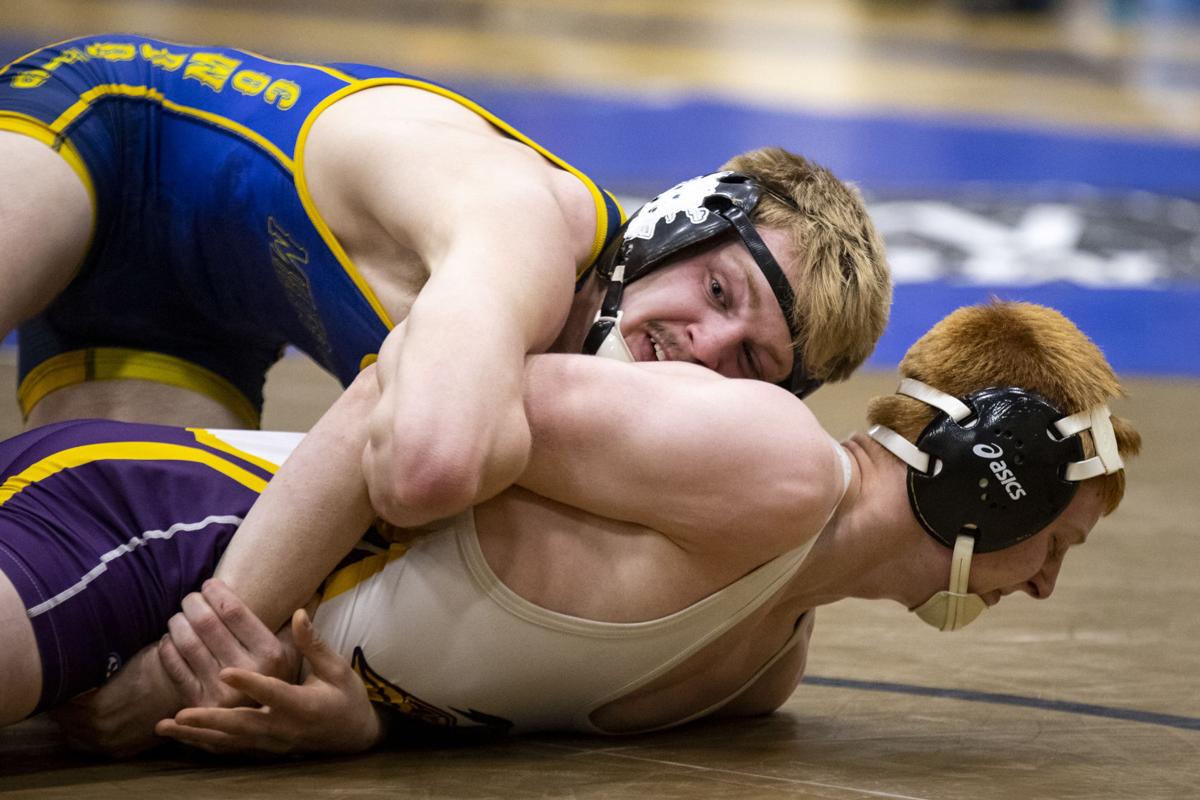 MILES CITY — The opening day of the Class A state wrestling tournament played out as expected — with Sidney flexing its collective muscles and Lewistown’s Cooper Birdwell winning in vintage fashion.

Birdwell, an Oklahoma State commit who is trying to join a select group of undefeated four-time champion, was matched up against teammate Colton Picco in the 132-pound quarterfinals Friday at the Custer County District High School gym. It was more lighthearted than anything.

Picco, for all intents and purposes, let Birdwell win with a forceful pin just eight seconds into the bout. Both wore big smiles after the match in front of a cheering crowd.

“We’re just a bunch of goofballs,” said Birdwell, who wasn’t joking around when scored a pin in 1:06 to win his opening match earlier in the day.

It’s good to see Birdwell having fun on his way to history, because there’s serious business on tap for Saturday when he looks to become just the fourth wrestler in Montana high school annals to finish his career unbeaten and with four individual titles.

The four-timer club, meanwhile, numbered 36 entering the weekend. The consequential nature of Birdwell’s pursuit is palpable, and he can feel it. He is staying in the moment, though.

“I guess my mindset is the same as it’s always been — stay in good position, stay on offense and believe in my coaches,” said Birdwell, who will face Laurel’s Kade Wersland in the semifinal round. “At the end of the day, I’ve put in a lot of work and my coaches have put a lot of work into me.”

While Birdwell held up his end of the bargain Friday, Sidney opened up an advantage in the team standings by staging one of the best single-day performances in its proud history.

The Eagles put 14 into Saturday’s semifinals, which longtime coach Guy Melby affirmed is a program record. That resulted in 141 points, which opened up a lead over second-place Frenchtown (105 points) and third-place Laurel (90.5).

Among Sidney’s semifinalists are two-time champions Aden Graves at 152 pounds and Riley Waters at 205, as well as returning titlists Owen Lonski at 113, Jordan Darby at 138 and Brodey Skogen at 285. Of their 16 grapplers, only one has been eliminated.

Sidney boasts one of the most decorated wrestling traditions in the state, having already won 11 team titles. Who knew there were more records to be broken?

“It has to rank right up there,” Melby said when asked if Friday was among the best days his program has experienced. “That’s a pretty good day. That’s not bad. We’ll take it.

“Now we’ve just got to duplicate it. Now our slate is clean and we’ve got to come back and get after it tomorrow.”

“We’re shooting for 400” points, Graves said with a grin. “That was the goal coming in, and we’re going try and get that.”

Frenchtown coach Jesse Long said he hoped his team could put as many as five in the semifinals, but the Broncs nearly doubled that initial goal.

“That’s a good performance,” Long said. “Tomorrow morning is going to be the round that lets us know what’s really going on. Just want kids to show up and wrestle complete matches and wrestle tough.”

Landon Stewart (103 pounds) and Eli Warner (120), who each made the finals last season, are back in the semis for the Broncs. John Warner also won two matches for Frenchtown at 138, avenging a first-round defeat from last season when he was the top seed from the Western division.

“I just looked past people and got beat,” an emotional Warner said of last season. “It’s my senior year, and (Saturday) I need to just wrestle solid again and I should be set pretty good.”

Leidholt, a three-time finalist and a returning champion, dominated his two matches on Friday to return to the semifinals. Also a returning champ, Thivierge scored two pins on his way to another berth in the semis.

Tyler Emineth (152 pounds) and Connor Ulschak (205) each won twice for Laurel, helping to prop up the Locomotives’ point total.

Lewistown is in fourth place behind Laurel with 79 points. Miles City is in fifth with 70.

Photos from the first day of the MHSA Class A Boys State Wrestling Tournament at Custer County High School in Miles City on Friday, March 5, 2021.

Team scores and semifinal matchups from the tournament in Miles City.

Sidney’s Kolton Reid stands up after winning his first round match on Friday at the Class A state wrestling tournament in Miles City.