John Letasky: An event with 2 parades, how cool is that?
Share this
{{featured_button_text}}
1 of 2 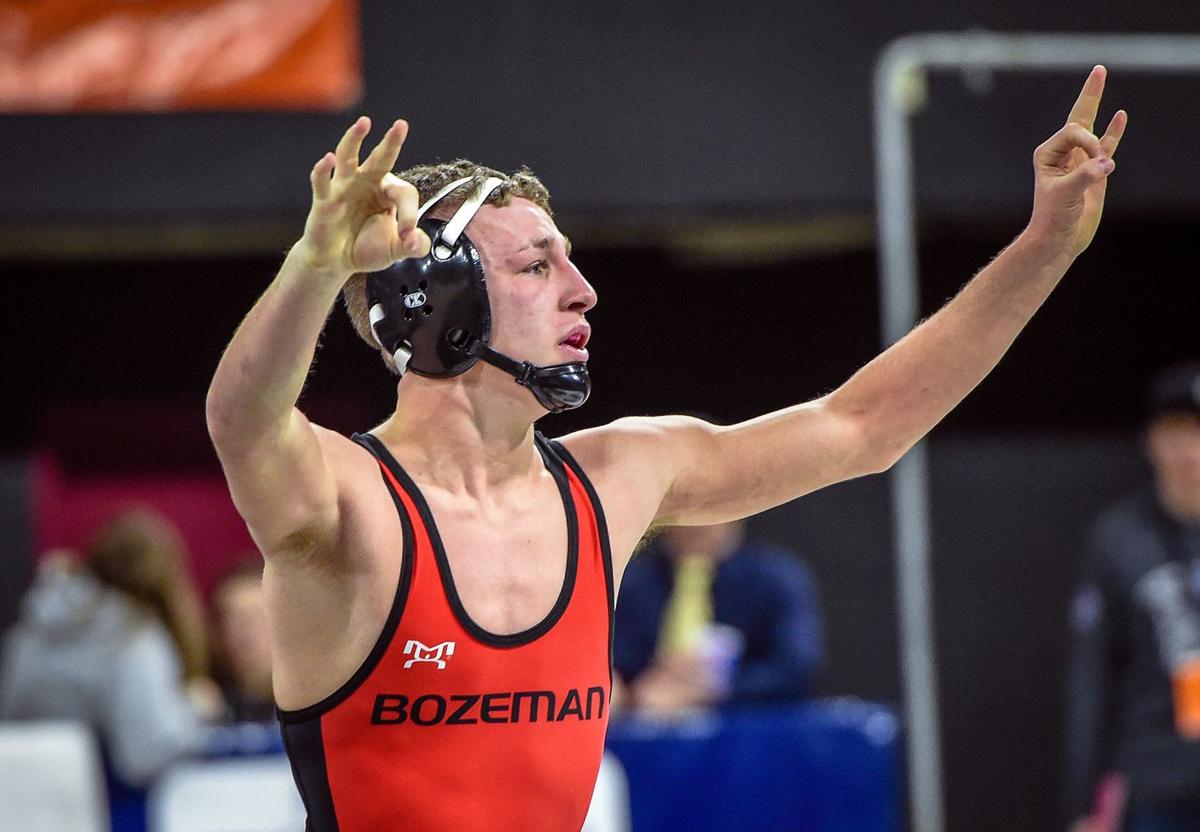 Bozeman's Leif Schroeder (138) will be attempting to win his fourth State AA title this weekend at First Interstate Arena at MetraPark. 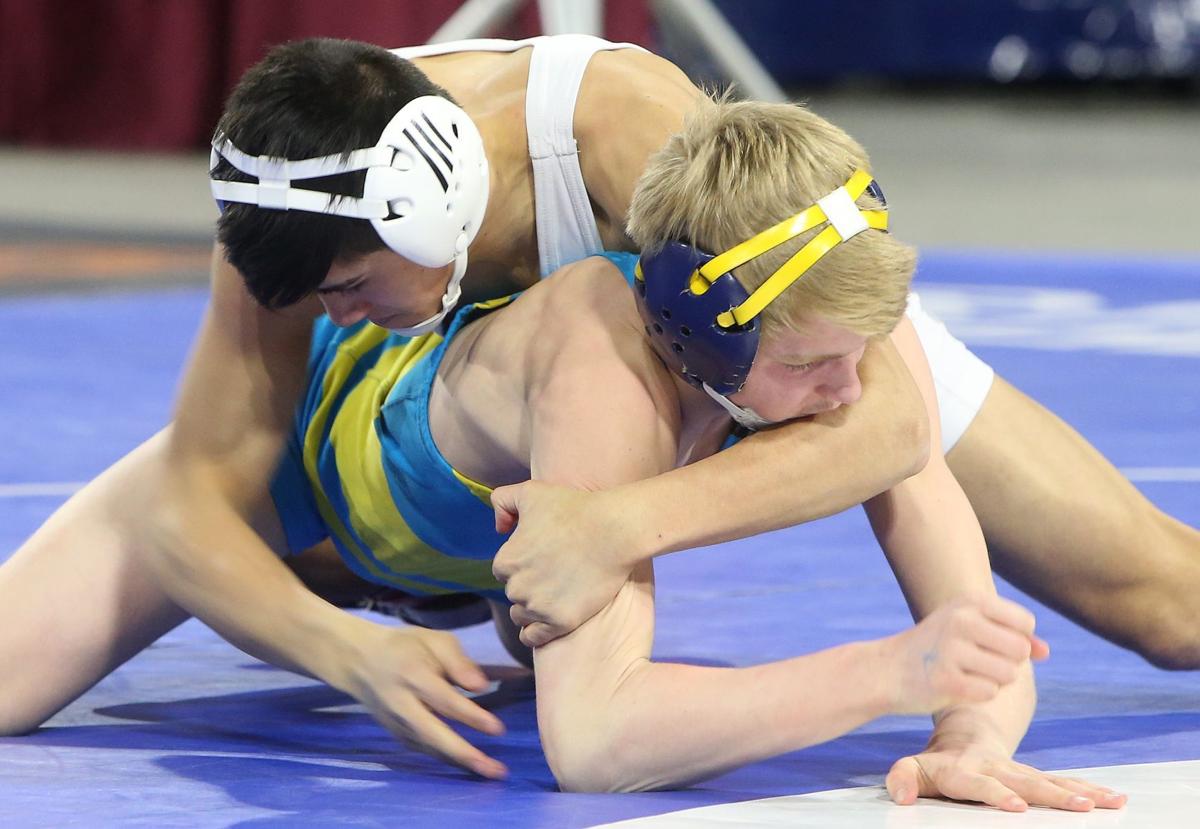 Frenchtown's Jake Bibler and Damian Leidholt of Miles City wrestle in the Class A 120-pound match in the championship round of the state wrestling tournament at Metra on February 10, 2018. Bibler (126) will attempt to win his fourth State A wrestling title this weekend at Metra.

BILLINGS — An event with two parades. How cool is that?

For two parades, it must be pretty cool. And it must mark a special occasion.

Whether they’ve wrestled at the Metra previously, or if Friday is their first time, there is no doubt it will be a special occasion for the approximately 624 student-athletes at the state wrestling tournament this weekend.

For the 31st time, the annual All-Class State Wrestling Tournament rolls into First Interstate Arena at MetraPark on Friday and Saturday.

And, those competing on the 12 mats lining the arena floor are among the best of the best, each qualifying for the extravaganza at one of eight divisional tourneys held Saturday.

For a wrestling fan, there is something for everyone.

Whether you’re into following powerhouse teams such as two-time defending State A champion Sidney, wish to root on possible four-time state champions Leif Schroeder of Bozeman or Jake Bibler of Frenchtown, hoping to catch an upset, or just can’t get enough wrestling and visiting with fellow fans, friends and family members, wrestling enthusiasts leave the arena after a long day of cheering Friday night and make their way back by 9:30 a.m. Saturday morning for the highly contested semifinal round.

While enjoying the matches, there is anticipation for the consolation finals at approximately 1:30 p.m. Saturday and the parade of finalists at 3:15 leading to the championship showdowns.

“Everybody you always talk to loves to make the trip to Billings to watch the all-class wrestling tournament,” said Montana High School Association associate director Brian Michelotti, whose role as tourney manager dates to 2006. “It’s a pretty special event.”

For those who have never taken in the action, Michelotti described it as “the best wrestling that happens in our state at the high school level. If you haven’t been there, it’s something to see.”

Leading up to the tourney, Michelotti said those he’s visited with are already counting down the days.

“In talking to a lot of wrestling coaches in the last few days, everyone is fired up,” he said. “We should have some good team battles.”

And while the talented wrestlers are sure to dazzle the crowd, the volunteers provide the backbone of the tournament.

Michelotti said Billings Public Schools director of athletics and activities Mark Wahl “and his crew have done an amazing job getting the volunteers coordinated.”

An upwards of 200 volunteers, including many from Billings but also plenty from all across the Treasure State, donate their time in many capacities. Some of the volunteers serve as table workers, or assist with tasks such as weigh-ins, marshaling, setting up mats, and cleaning mats.

“That’s just the people you see on the floor,” Michelotti said.

Why do the volunteers risk possible bad roads and spend most of their weekend indoors at the Metra? According to Michelotti, that’s just the wrestling community.

“We’re just really fortunate in the sport of wrestling we have a tremendous amount of volunteers who want to show up and help us,” Michelotti said. “When you ask people to help out at a wrestling tournament, they show up in gobs.”

And one special fan will be officially working at his last wrestling tournament. MetraPark general manager Bill Dutcher, who will have worked at all 31 of the events in some capacity while employed at Metra all these years, is retiring at the end of the year.

“Bill has been such a great promoter of this particular event," Michelotti said. "Bill is a big fan. … We will miss Bill Dutcher and his support of the MHSA wrestling tournament, he’s been a great friend of the MHSA for all of our events we put on there.”

For an event that essentially begins with the parade of athletes at 10 a.m. Friday and concludes with a thrilling championship finale setup with a parade of 78 finalists, the state wrestling meet is pretty cool and there’s no doubt for many this weekend will be special.

Notes from Saturday at the state wrestling tournament at First Interstate Arena in Billings.

Sidney has qualified 17 for the state tournament, eight of which are seeded No. 1 from the East.

State B-C Wrestling: The heavyweight brawl for a team title will likely come down to the last round

Huntley Project and Glasgow are battling for the State B championship.

The intricately hand-lettered brackets have become a keepsake for generations of Montana wrestlers.

Check out the final team scores and placing matches.

Bozeman's Leif Schroeder (138) will be attempting to win his fourth State AA title this weekend at First Interstate Arena at MetraPark.

Frenchtown's Jake Bibler and Damian Leidholt of Miles City wrestle in the Class A 120-pound match in the championship round of the state wrestling tournament at Metra on February 10, 2018. Bibler (126) will attempt to win his fourth State A wrestling title this weekend at Metra.