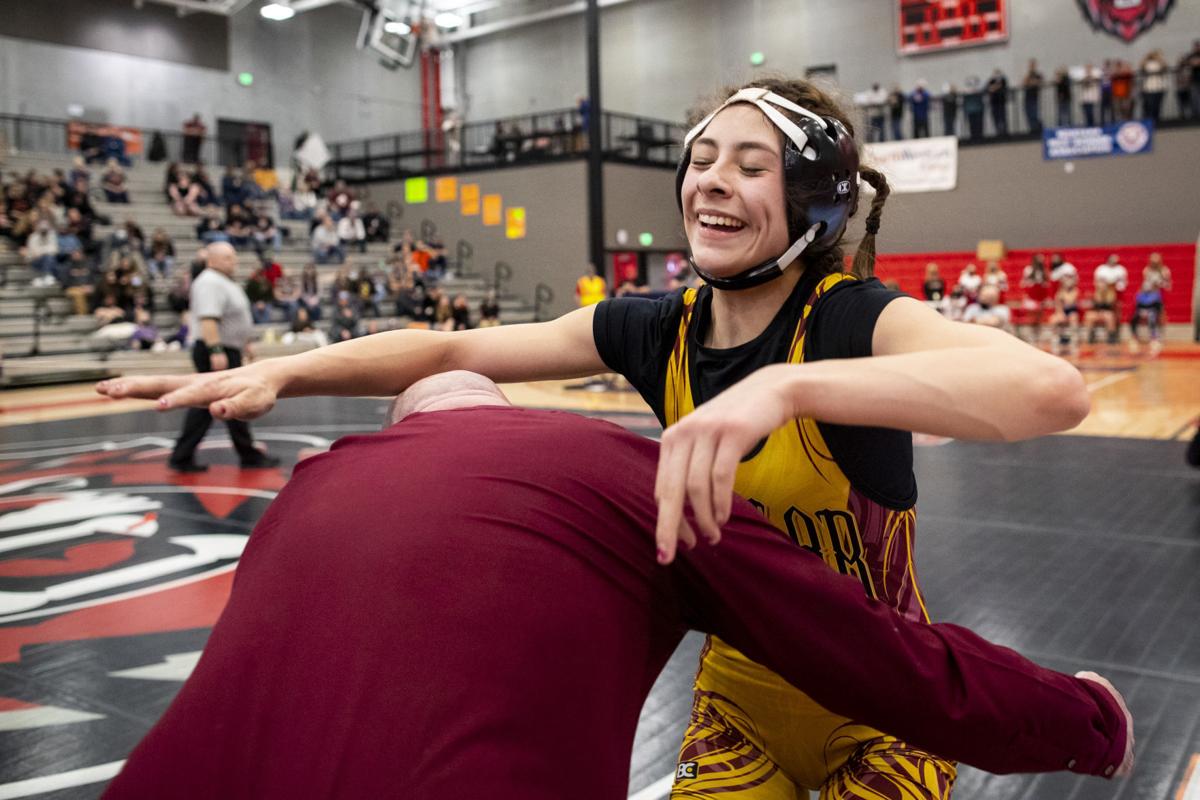 Poplar's Jazmin Gorder goes in for a hug after winning the 113-pound final of the MHSA girls wrestling state tournament at Lockwood High School on Saturday. 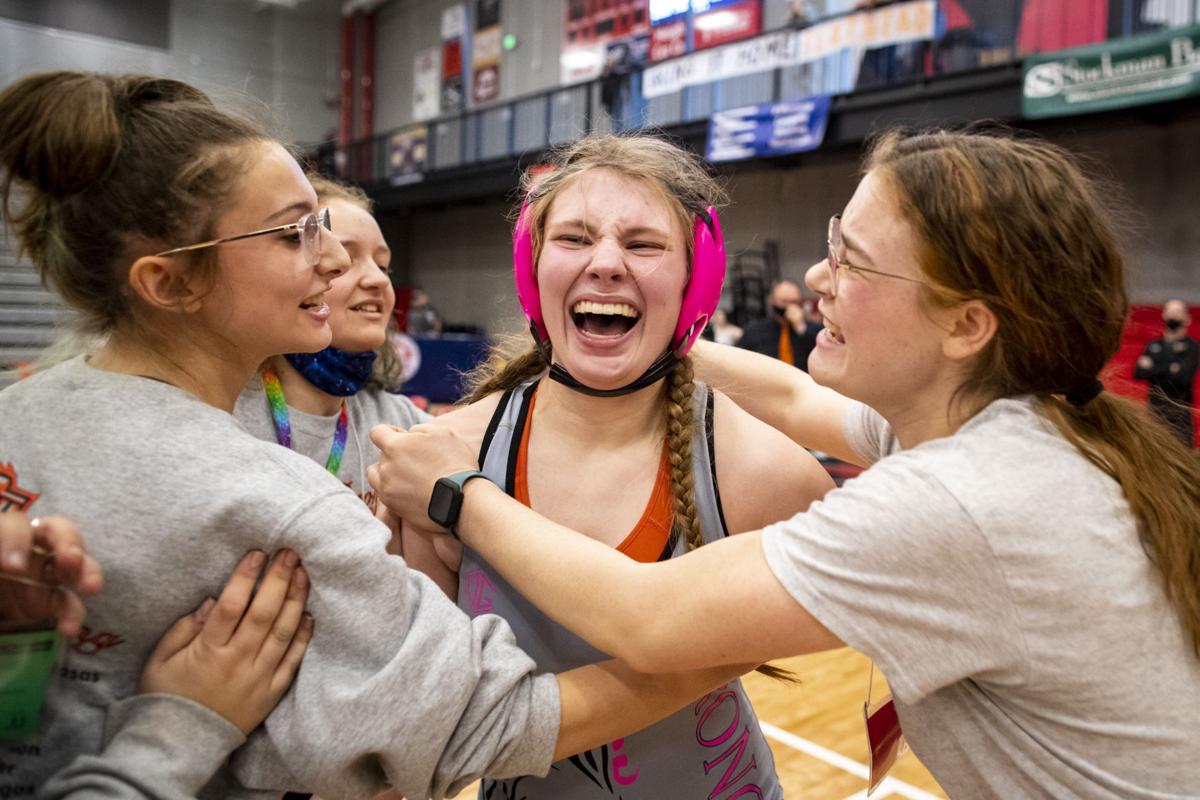 Billings Senior's Kendal Tucker is swarmed by teammates after winning the 152-pound final at the MHSA girls wrestling state tournament at Lockwood High School on Saturday.

BILLINGS — These girls wanted to wrestle.

The drive for success was evident all season.

Starting with the first practices of the year and ending with the state tournament in this inaugural season of girls wrestling in the Treasure State, the dedication, enthusiasm, talent and skill of the athletes was on display.

It was a year that will long be remembered by Montana sports enthusiasts.

Some of the girls were wrestling rookies, drawn to the chance to compete and bond through the addition of a new sport to the lineup.

Others had wrestled at the high school level previously, as girls who wrestled in grades 9 through 12 before this season competed against the boys and girls in the regular and postseason. And, there were some who were either current club level wrestlers, or who had competed in the sport at the youth level in the past.

On Friday and Saturday at Lockwood High School 148 girls wrestlers from 47 different teams, including classes AA, A and B-C, competed in the first girls wrestling state championships sanctioned by the Montana High School Association.

Entering the state meet, tournament director Brian Michelotti of the MHSA had said “we expect to see some great wrestling.”

Billings Skyview coach Ben Sulser, agreed, saying, “It will be really exciting to watch. The girls events I’ve been to have been really competitive as a whole. I think it will live up to the billing.”

Those competing did indeed put on an impressive show — both for the limited spectators in the gym due to the ongoing coronavirus pandemic, to those watching at home on the NFHS Network — throughout the two days.

“It feels really good,” Taylor said of becoming the first girls state champion in Montana history, noting she was ready to put in more hard work to prepare for future matches.

Taylor was one of three freshmen champions, with Amaiya Kirn (126) of Sidney and Kendal Tucker (152) of Billings Senior.

Tucker, who used the words “cool” and “awesome” to describe the action over the two days, claimed the championship at 152 pounds. Tucker was a wrestling rookie when she had started the season. She earlier had told The Billings Gazette and 406mtsports.com, she had thought about playing basketball but decided that “I just wanted to try something new and I like wrestling more than basketball.”

Tucker’s mom had also been encouraging her for quite some time to try wrestling.

It turns out, Tucker, who finished the season 13-2, was pretty good at the sport and with the “hard work” she put in during the season made the right choice between basketball and wrestling.

Like all wrestling tournaments, there were also good luck charms.

For some, the inaugural girls state wrestling tournament will be the only one they compete in. That’s true for senior state titlists Skylar Connelly (132) of Valier, Sophia Dulin (170) of Baker and O’Maste Foster (285) of Florence-Carlton.

Stroh, a senior, qualified for state the three years prior and in 2018 she became the first female state placer in Class B-C history, finishing sixth at 103 pounds.

Stroh had thought about wrestling beyond this year, but “I couldn’t find a college with the degree program I wanted” that also offered wrestling.

While Stroh will be studying at college and competing in team roping and breakaway roping, many of those competing at Lockwood over the weekend will continue to study wrestling moves and matches in preparation for more action next year.

Billings Skyview sophomore Kassidee Savaria finished an outstanding season of 13-0 by winning the 205 pound championship. All of Savaria’s wins were by pin.

An honors student with a weighted 4.17 cumulative GPA, Savaria said wrestling “is her main hobby.”

Sulser said like many good wrestlers, Savaria can be found studying matches on the internet.

“She’s consumed with women’s wrestling,” he said. “She breathes wrestling. She’s all about wrestling.”

The Kalispell Flathead Brave Brawlers were the team champions with 142 points, while Billings Senior was second with 135 and Cascade third with 68.

Flathead sophomore Trinity Boivin was a semifinalist at 120 pounds, winning by fall twice, to reach the round. The first-year wrestler explained that the Braves were also students of the game.

“Just eat, sleep and talk to the team about how we can improve,” Boivin, who would place sixth, said Friday of what she would be doing leading up to the semifinals on Saturday.

He was thrilled to be coaching at the historic tournament, and for the Brave Brawlers to win the initial girls championship was the cherry on top on the cake.

“Being the old-timer this is right at the top of the list,” he said.

“Overall I don’t think there was a secret sauce to winning. It boils down to we had so much support from the administration, the coaches and our boys embraced our girls. We learned a lot on the go.”

At times this year it could be hard to have girls-only matches with some schools having several girls wrestlers, and others not having many, along with altered schedules because of the virus.

“We had to get creative with the girls to get matches,” explained Flathead volunteer co-head girls coach Amber Downing.

To the end, the girls wrestled through it all.

“Every day we have showed up to practice with the goal to get better,” said Senior coach Mickey Mahlmeister before the state tourney. “We hope our best day is this weekend.”

For many of the girls wrestlers, the realization of a dream occurred at Lockwood over the weekend with the state wrestling tournament.

After winning the 138-pound title, Cut Bank junior Mariah Wahl said she enjoyed the electricity of the weekend, saying, “just the atmosphere in general is insane.”

What was insane was the talent Wahl displayed in earning the Quick-Pin award with four falls in 1:39.

While all the wrestlers were helping to shape the growth of the sport, Lily Schultz won the first individual state championship in Bozeman Gallatin school history. With the bracket at 145, the junior can now chase a second state crown next season and establish more history for the Raptors.

Schultz noted “consistency is key” and with her 9-0 record it’s hard to believe she won’t be a consistent winner again next season.

Undoubtedly next year the growth of the sport will continue.

“Absolutely,” said Boivin when asked if she would wrestle again next year. “I would never go back. I wouldn’t do anything else.”

You can bet for many of the girls wrestlers, if the offseason training hasn’t started yet it will in the near future.

Plenty of storylines to follow at state tourney in Shelby.

Check out the team scores from the divisional wrestling tourneys, which conclude on Saturday.

State wrestling tournaments to be streamed on NFHS Network

Boys tourneys to be held at three sites this weekend.

Check out the divisional results.

State wrestling tourneys are set for next weekend at three different sites.

Billings Senior orange and black, Billings West gold and black will be prominent in Kalispell

Top-ranked Broncs send 24, and No. 2 Bears 23 to state. Skyview will have 12 wrestlers competing at Flathead High School.

Missoula Big Sky wrestler Hunter Meinzen is looking to end his high school career on a high note with his third consecutive state championship before he heads to wrestle at Oregon State.

The race for the team title is expected to be a hotly contested one with a loaded field at the State AA wrestling tournament in Kalispell this weekend.

Sidney native has been guiding the powerhouse wrestling program for 35 seasons.

Poplar's Jazmin Gorder goes in for a hug after winning the 113-pound final of the MHSA girls wrestling state tournament at Lockwood High School on Saturday.

Billings Senior's Kendal Tucker is swarmed by teammates after winning the 152-pound final at the MHSA girls wrestling state tournament at Lockwood High School on Saturday. 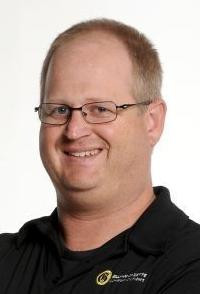