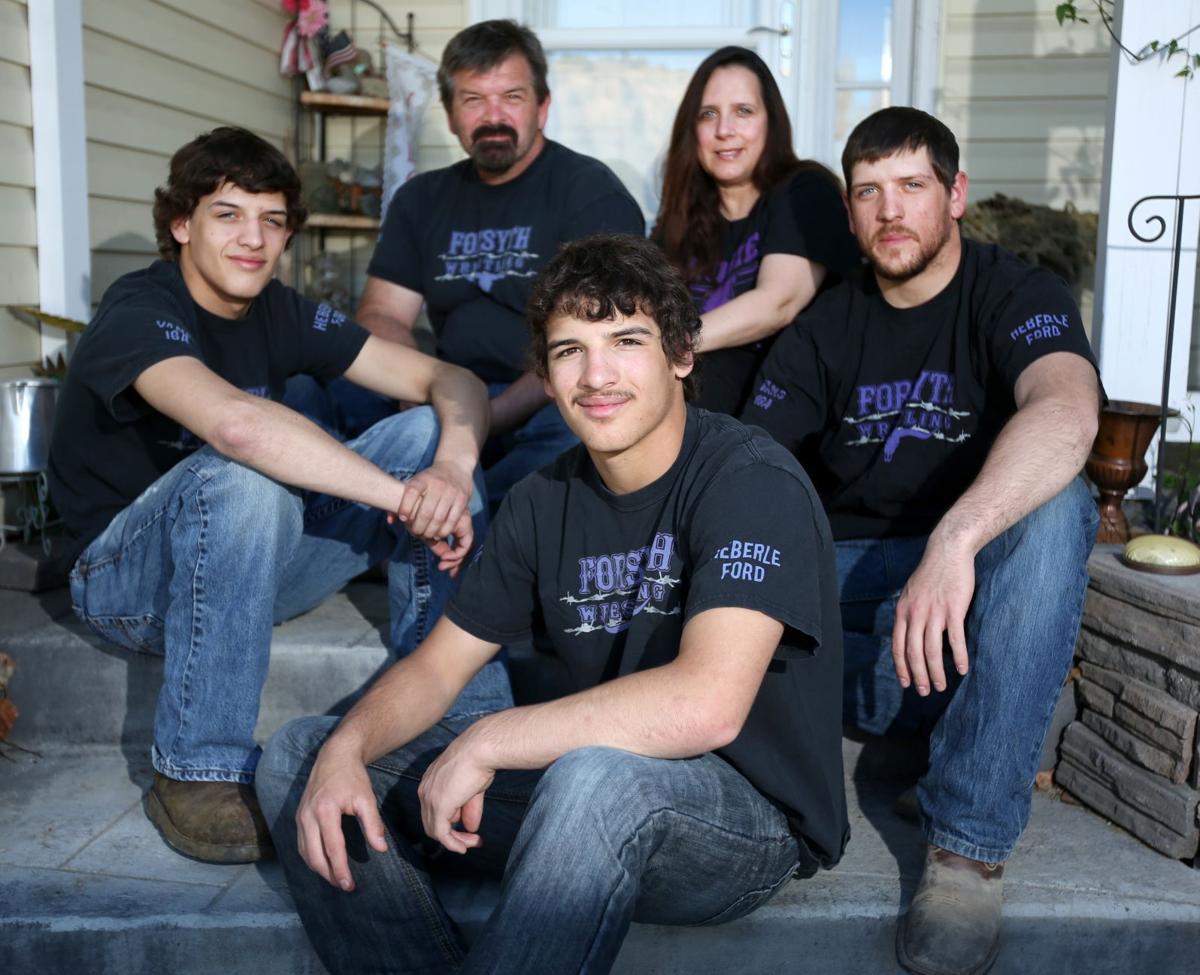 Michael Weber poses for a portrait with his brother Nathan, left, father Scott, mother Maria and brother Brandon at their home in Forsyth. 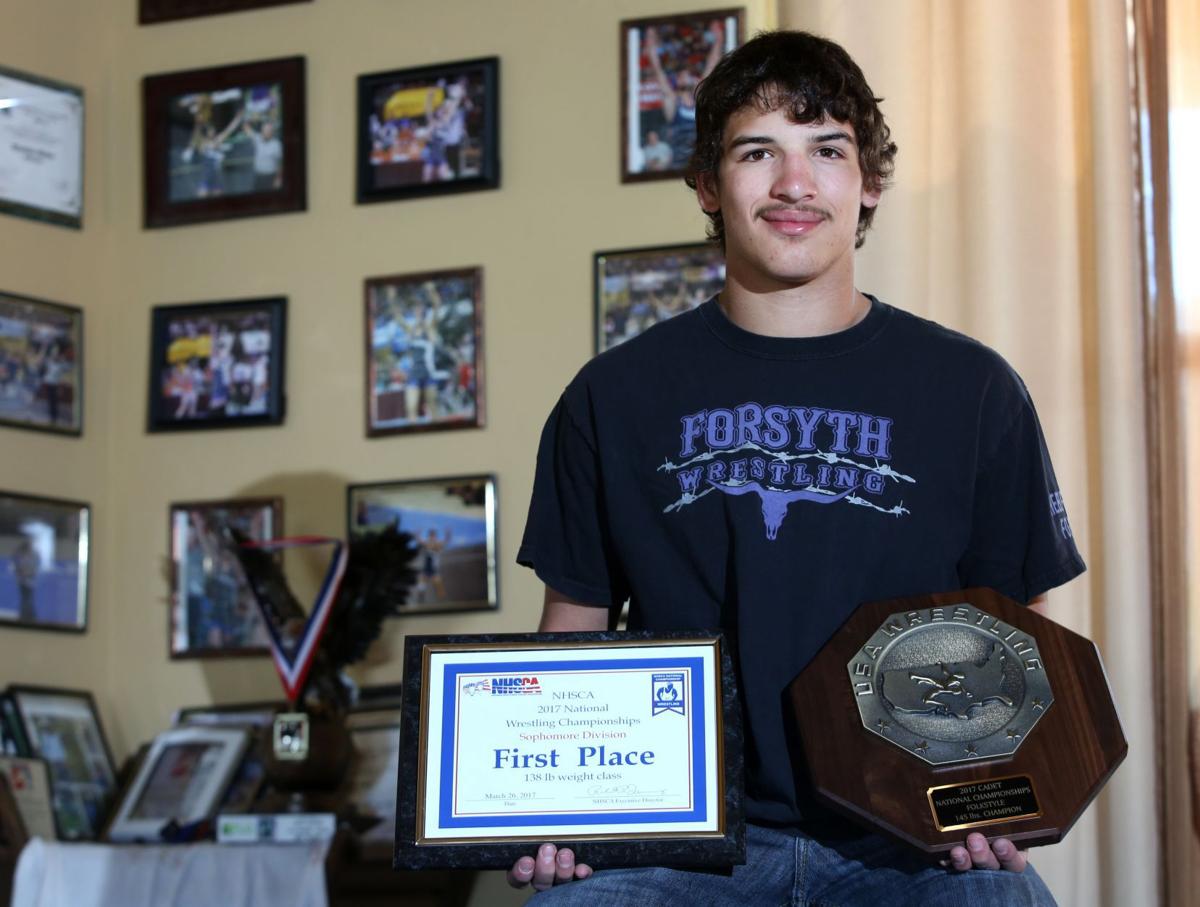 Michael Weber holds two of his most recent trophies at the family home in Forsyth on Thursday. In his left hand is the USAW Folkstyle Nationals championship "Stop Sign" trophy for the cadet division at 145 pounds. In his right hand is the award he received for winning the National High School Coaches Association Nationals sophomore 138-pound division. 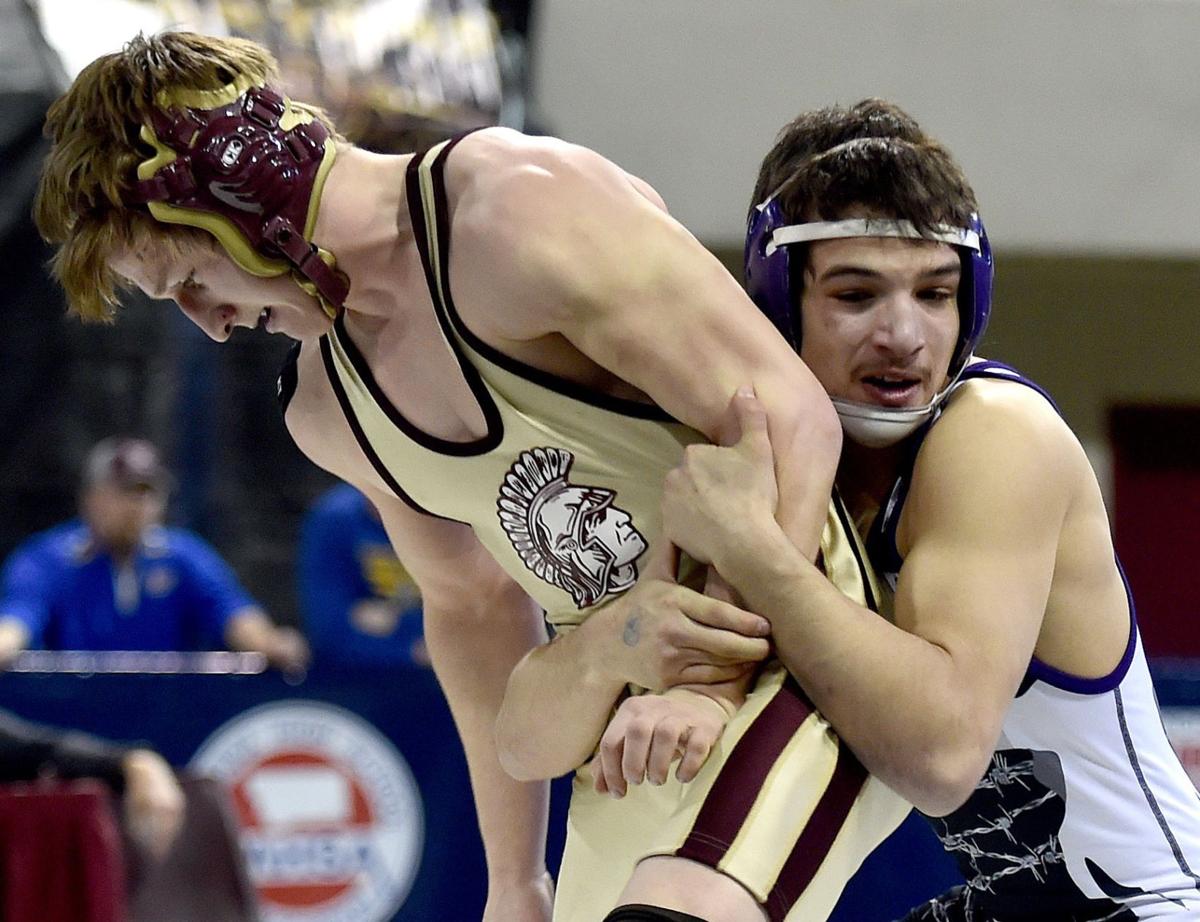 FORSYTH — A United States flag hangs outside the family home, which sits just a few hundred yards from Interstate 94.

Overlooking the home are rimrock bluffs, known as "The F", with a big white cross sitting atop the rims.

It's the home in which Forsyth wrestling star Michael Weber grew up, along with his four older brothers. All have won Montana State B-C wrestling championships. In all, the five brothers have captured 14 state championships.

Most of the Montana High School Association state brackets are displayed in the family's garage. The rest are at Grandpa and Grandma Weber's house a block away.

In late March and early April, Michael forced the family to clear more space in the trophy room with a unique haul. He won a Triple Crown of wrestling, starting with the sophomore 138-pound division bracket in Virginia Beach (Virginia) at the National High School Coaches Association Nationals. He then added the USAW Folkstyle Nationals title in Cedar Falls, Iowa, in the cadet 145-pound division and Reno (Nevada) Worlds 15-and-under 135-pound bracket to the collection.

At the Reno Worlds, Michael earned an eagle trophy. At the USAW Folkstyle Nationals, he earned the "Stop Sign", so named because the trophy is in the shape of an octagon. For the NHSCA, he earned a distinct plaque.

All three will earn a spot among a cherished place in the Weber home featuring photos of the brothers capturing their individual highlights.

"We call it chasing stop signs," said Michael, although no stop appears to be in sight for the rising Forsyth star.

The garage, which is a rec room of sorts with a large TV, has a bench press and weights, along with the brothers' old freestyle bicycles hanging in storage. Wrestling mats that once lined the floor are now in the rafters because the boys now practice mostly at Forsyth High School.

"They learned how to walk on those wrestling mats," says Michael's mother, Maria, father Scott's wife of 29 years.

In the garage are shelves lined with trophies. But, Michael added, the real trophy room is in the kitchen.

"The good ones get to go there and the rest come out here," he said, gesturing toward a garage wall.

The eldest brother, Brandon, turns 22 later this month. He was a three-time state titlist for the Dogies before graduating in 2014. Brandon won an NAIA national title for Montana State-Northern this year and was singled out as the Most Outstanding Wrestler at the national tourney; he was the state's all-time wins leader until younger brother Luke — a 19-year-old four-time state champ who was a redshirt freshman this past year at Nebraska — passed him in 2016. Matt, 20, is a four-time state champ and also wrestles for the Lights, placing third at the NAIA tourney two years ago. Nathan, 17, is a junior at Forsyth; he is a one-time state champ and two-time runner-up.

Michael is a two-time high school state champion, winning the 145-pound state title this year and the 126-pound crown as a freshman. His career high school record is 99-8, including 54-2 this past year.

A portion of my interview Thursday with Forsyth wrestler 🤼 Michael Weber. Look for story @bgazettesports and @406mtsports later today pic.twitter.com/LfDChBnAVC

"All the trophies just start running together," said Scott, a one-time state champion for Forsyth who has coached the Dogies for 15 years and guided the team to State B-C titles for three straight years from 2011-13. "We used to have a bigger TV out here and now the trophies got taller and I had to change that. ... There are several more brackets out here I don't have room for. Some trophies are stacked in a corner. There is nowhere to display them."

Playfully, 16-year-old Michael — who owns the tallest trophy in addition to a 4 1/2-feet poster-sized bracket from his victory at the Reno Worlds — grabbed a handful of crutches from the bowels of the garage and proudly proclaimed while referencing his brothers' assorted injuries over the years, "I've never actually broke a bone, knock on wood."

Injuries are bound to happen in such an active family. The brothers help local ranchers brand cattle and have played their fair share of sports, along with fine-tuning their wrestling moves against each other at home.

Nathan said some of the Webers' classmates give Michael a hard time at school because of his penchant for wrestling cows and humans alike. Nathan, Michael and a couple buddies from Forsyth will help at a branding in Hysham on Saturday. They will also pitch in at another branding Sunday in Forsyth.

"We have a joke that goes around Forsyth that Michael can go wrestle national tournaments, but he can't wrestle calves," Nathan said. "But, he does well at that, too."

Michael has already proven himself on the mats. But he continues to measure himself against his brothers while also wanting to achieve new milestones. His long-term goal is to follow Luke to Nebraska and win an NCAA title.

"It's not really pressure," Michael said of his brothers' achievements. "It's more like I'm trying to follow in their footsteps. They've laid the path out for me and I try to look up to them."

While the brothers were growing up, to enter the house they could not use the front door, which has artwork saying, "Family, Faith, Friends" hanging above it. If they did, they would have to do pushups as punishment. It was a way for Scott to have fun with his sons while also teaching them rules and values.

The pushups served to strengthen the boys in their wrestling careers as well. Their friends did not use the front door, either.

"Guests can come in the front door once and not do pushups," Scott said as he and Maria, Brandon and Michael recently sat around the family's kitchen table sharing memories, many of which drew laughter and usually another story.

"It was always pushups for anything," Michael said. "If I wanted any money from my dad at wrestling tournaments, it was like, 'Hey Dad, can I have a dollar?'. I'd have to do a 100 pushups for the dollar."

If the six-bedroom house could talk, the stories it could tell, Michael said, noting: "The walls would say they hate us. We've put them through some punishment. ... We were always wrestling. Whoever it was, we'd walk around and trip somebody and then we'd throw down the gauntlet."

Brandon, sitting quietly and listening to his younger brother, finally chimed in, "We just worked him over."

"I live in that spot over there, cooking," she said, motioning to the oven.

For Michael, family means everything. He was excited this year when Brandon and Matt flew in from Havre for the state tournament. Never in Michael's wildest dreams did he think Luke would make it from Lincoln, Nebraska. Scott had even told Michael that Luke was going to have to stay with the Cornhuskers and wouldn't be at Rimrock Auto Arena at MetraPark.

But, as Scott was informing Michael that Luke couldn't watch his brother compete, Luke greeted Michael from behind with a sneak attack and "a big old grin on his face," Michael said.

With their mom, brothers, grandparents Merlyn and Ginny Weber, three uncles and an aunt watching, Nathan finished second at 126 pounds and Michael first at 145.

"It's nice having your family come home," Michael said. "They are all out living their lives and it's nice they take time out of their day to come support you and what you do. It means a lot."

Michael said he was pushed to capture the NHSCA Nationals title this year after taking second last season. He wasn't sure of himself last year, but when he claimed second, he said he realized his potential. After that, he began to pile up wins in the offseason.

While competing at Virginia Beach in late March, he beat the No. 1 ranked wrestler in the country in Devin Schwartzkopf of Missouri to cap a 6-0 weekend. In Cedar Falls, Weber also went 6-0 in another 64-man bracket. Then on April 7-9, Weber won a 128-man bracket in Reno.

The Triple Crown was complete.

"I did what I set out to do and finished my journey," Michael said. "This is a little geeky, but you are on an epic quest. It's a relief, of course."

After the first two tourneys, Michael had a target on his back. But he took the experience in stride.

"My perspective is you are on a ladder and that is another rung on the ladder you have taken up," he said. "It's another match and anything can happen. You make it so nothing bad happens."

Michael enjoys history and carries a 3.6 grade-point average. He is looking forward to soaking up more history and culture as part of a team traveling to Japan in late June on a wrestling excursion.

"I'm actually kind of a history nerd," he said. "Kids in my class come up to me for help. I'm a sponge when it comes to history."

When he returns home to the big yellow house about a block away from the Forsyth Town Pump, one can bet Michael will be greeted by his mom, dad and brothers. The family dogs, Bella and Raven, will be there wagging their tales. And Michael will undoubtedly have collected a souvenir to add to the family's trophy collection.

Coming from someone else, what Briana Guse muttered during a Billings Senior-Billings Skyview postgame handshake line might have started a pre…

Michael Weber poses for a portrait with his brother Nathan, left, father Scott, mother Maria and brother Brandon at their home in Forsyth.

Michael Weber holds two of his most recent trophies at the family home in Forsyth on Thursday. In his left hand is the USAW Folkstyle Nationals championship "Stop Sign" trophy for the cadet division at 145 pounds. In his right hand is the award he received for winning the National High School Coaches Association Nationals sophomore 138-pound division.