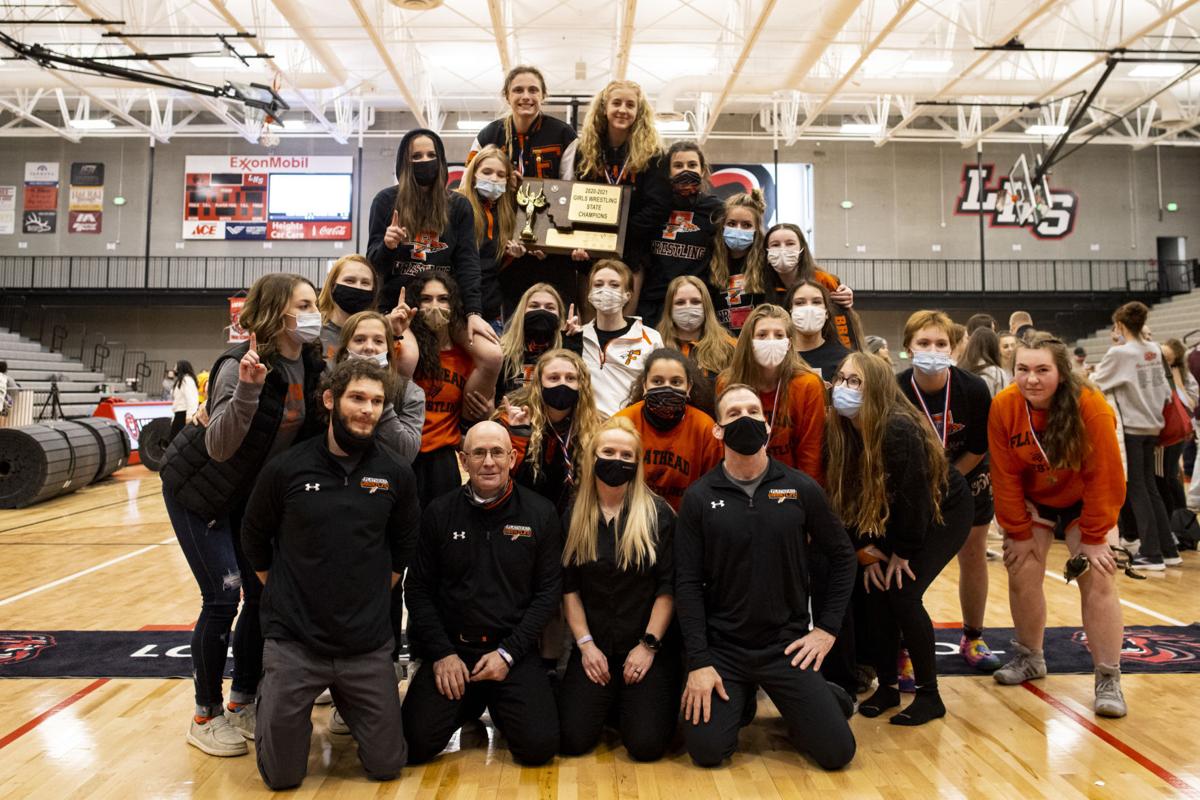 Kalispell Flathead’s wrestlers pose for pictures with the Girls Wrestling State Championship trophy after the finals at Lockwood High School on Saturday, Feb. 20, 2021. 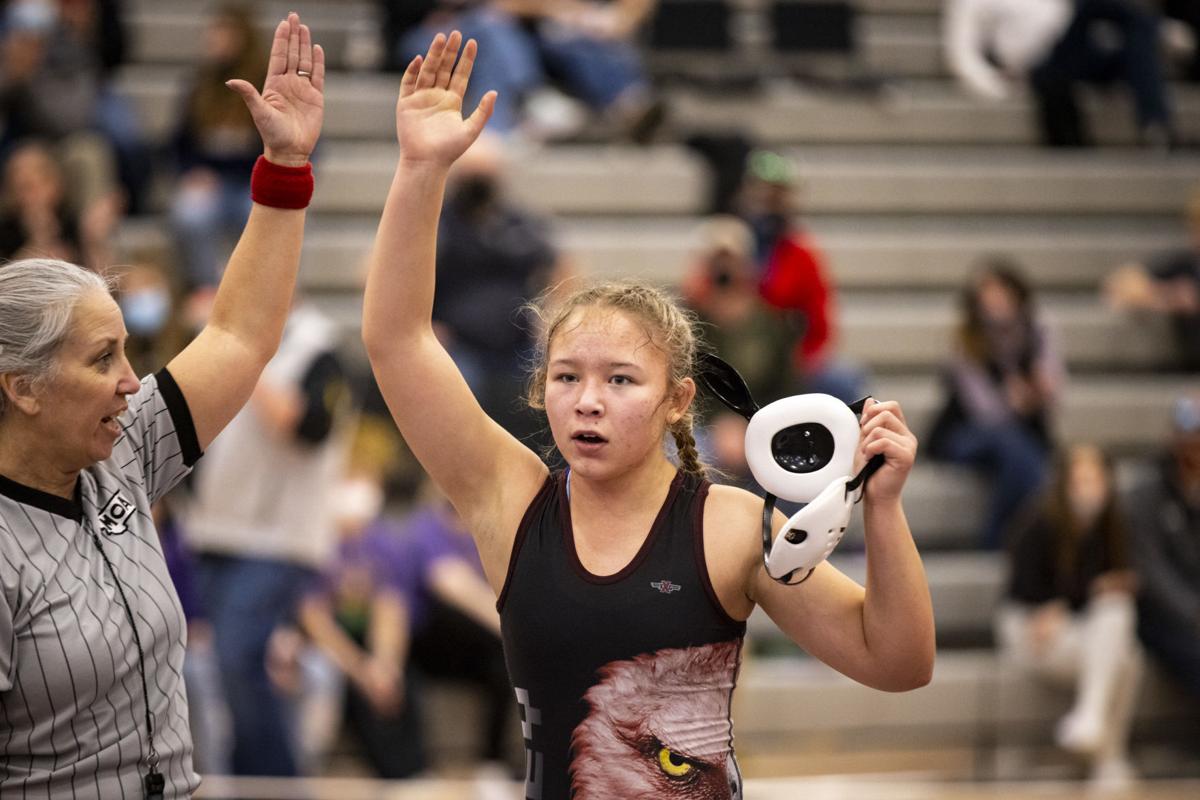 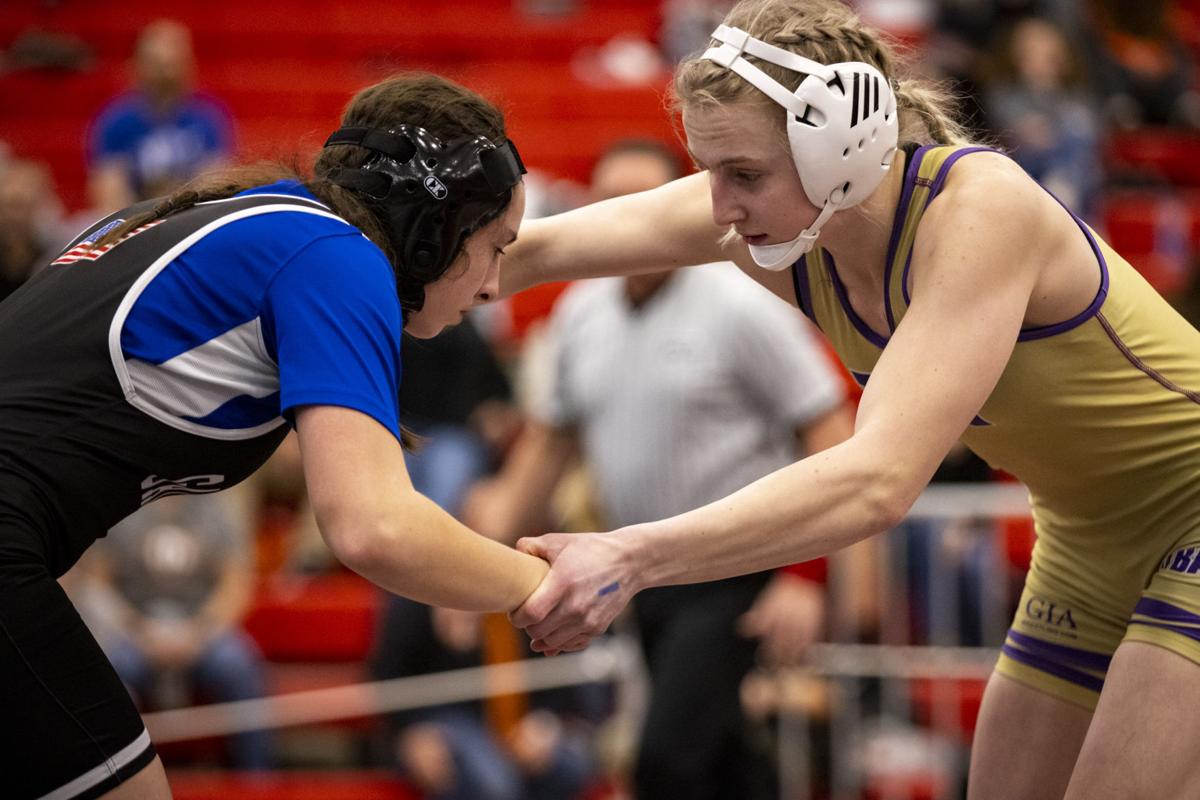 BILLINGS — It was time for a celebration!

For the 11 individual state champions, and all 148 girls who competed in the inaugural state girls wrestling tournament, there was reason to mark the historic occasion.

Mariah Wahl said she was “looking forward to those dinner rolls” during a celebratory meal after clinching the 138-pound girls state wrestling championship Saturday at Lockwood High School.

Wahl won the championship with a pin of Bozeman Gallatin’s Maria Matosich in 56 seconds.

While girls wrestling is in its first season as a sanctioned sport by the Montana High School Association, Wahl has been wrestling for four seasons.

And at the end of the event, Wahl said she was going to treat herself to a nice meal and forget about staying in wrestling shape, just for a little bit, as “it’s the offseason now.”

However, the celebration won’t drag out for Wahl as she does have the goal of “improving myself as an athlete,” for next year.

The team champion was Kalispell Flathead with 142 points. Senior was second with 135 and Cascade third with 68.

“I feel fortunate to be surrounded by great coaches and girls who wanted to put the time in and came to battle,” said Flathead coach Jeff Thompson. “We won it as a team. We didn’t have any individual state champions and every point counted. Flathead is a team-first wrestling program.”

“This is surreal and has been an amazing journey with these young ladies and what they accomplished as a team,” she said. “They left everything out there on the mat and trained hard.”

Senior coach Mickey Mahlmeister will forever be proud of this first-year Broncs team and what they accomplished.

“I really thought about this last night and I’m so proud of these girls,” he said. “None of them wrestled prior to this year, and they all wrestled hard and stuck it out. … They are pretty special.”

Every one of the initial state champions are now part of the Montana wrestling history lore.

Capturing the title at 103 pounds, was Taylor a freshman for the Bison. She won by fall over LeeAnn Hoch of Shepherd in 3:29.

“I was nervous at first, but also really excited,” Taylor said. “I didn’t know how I’d do, honestly, I’d never wrestled her before.”

Taylor has goals for next season as well, saying, “I can’t wait to get better and do this again next year.”

Gorder, a junior who has been wrestling for four years, won by fall in 3:08 over Rebecca Stroh of Chinook in the 113-pound title tilt.

Gorder said she joins her father, Chris, in the individual state champion’s club.

She was happy to be bringing a title home to Poplar, saying, “it’s good to bring this back for everyone.”

The two-day state championship weekend will be something Gorder always remembers.

“It honestly feels amazing to have been here and experienced it with my friends,” she said. “It feels good to be in the No. 1 spot. It takes so much work to get there. I wouldn’t have changed it for a thing.”

Gubler, a sophomore, was all smiles after winning the 120-pound crown with a pin in 30 seconds over Hannah Hurst of Hamilton.

“The fact we even had a girls state was amazing,” she said. “It was a great opportunity for all the girls to come together and see who is the best of the best.”

A fishing trip to the Yellowstone River is how Gubler plans to celebrate her championship.

“We’re probably going to dinner,” she said. “My coach said he was taking me fishing if I won.”

What was the most memorable part of the tourney for Gubler?

“Winning of course,” she said with a smile.

At 126 pounds, Kirn joins a large group of boys who have captured state championships for the Sidney Eagles.

The freshman said improvement over the season was key to her victory. She scored a 5-3 decision over Lily Grismer of Cascade for the championship.

“It feels very exciting,” she said. “I got better on my legs and shots and defending.”

Originally from Havre, Kirn has been wrestling for nine years and said she wanted to thank her mom and dad for all their support.

Connelly claimed a victory with a pin in 2:13 over Joli Beston of Wolf Point for the 132-pound bracket.

While originally the girls state tourney was to be held at First Interstate Arena at MetraPark along with the boys tournaments, the ongoing coronavirus pandemic changed those plans. The boys tourneys will now be held at three different sites March 5-6.

“It’s been really fun,” the senior from Valier said. “I was hoping for the Metra, but this works and is a nice facility. Everything was in a good order. I loved it.”

Connelly said she overcame two ACL surgeries in the past year-and-a-half.

“It was really hard,” she said of the last surgical procedure. “I had my knee surgery before the state got shut down. I did my physical therapy by myself.”

While dinner was planned at a Billings restaurant, where Connelly planned to “eat a lot,” she said she would soon start to focus and “prepare for my offseason tournaments.”

Schultz, a junior for the Raptors, won the first individual state championship in school history when she defeated Aleeyah Derlatka of Flathead by fall in 1:20 at 145.

“It feels amazing,” said Schultz. “I’m excited to create history for the school and help create a culture for everybody.”

Schultz said earning the school’s first state title at the first girls state wrestling tourney was a goal of hers.

“I wanted it bad enough,” she said. “It felt amazing. The tournament was really good for the girls. It felt good to have our own state tournament. It’s amazing how far we’ve come.”

In a 9-0 season, Schultz said dedication was a critical piece of the puzzle.

“I just work hard and show up every day. Consistency is key,” she said.

Tucker, a freshman for Senior, won by pin in 1:07 against Lillian MacDonald of Plains-Hot Springs in the 152-pound championship.

“Staying calm, working as hard as I can and being smart,” were what led her to victory Tucker said.

Tucker said her bracket — all of the champions were awarded large poster brackets detailing the action in their division — will be placed on a wall at her house and her medal will go “somewhere where my cat can’t grab at it.”

The Broncs second-place finish is something she’ll always remember.

“Awesome, I’m really proud,” Tucker said when describing what she felt about the team’s accomplishments. “We all worked really hard as a team. It’s amazing.”

Dulin scored an 11-10 decision over Butte’s Hayla Hoffman to earn the 170-pound championship.

“I knew she was a difficult competitor,” said Dulin, a senior for Baker. “We work hard every day, so I knew I could beat her.”

Dulin said it was her first year of wrestling and she “loves it.” She’d recommend others to try the sport.

“You work your butt off and practice every day and go 110%,” Dulin said. “Anyone can do it. I hope a lot more girls come out and compete. Wrestling is a good sport and teaches you a lot.”

Savaria finished a 13-0 campaign with all 13 wins coming by pin when she stapled Norah Larson of Belgrade in 32 seconds for the 205-pound title.

“It feels really good. I feel like I made my dream come true for the year and I’m right back at it again next year,” she said.

The win was especially satisfying to Foster, who said she didn’t wrestle at the beginning of the season as there wasn’t originally a heavyweight class offered and because her parents hadn’t received their COVID-19 vaccinations at that point.

“It’s like a dream come true,” Foster said while wiping back tears of joy. “I never thought I’d stand on this mat with all these girls here.”

Foster said she began wrestling in the fourth grade and to win the match was a dream come true. Foster said her family and all her teammates and supporters were extremely helpful to her achieving the title.

“This is seriously unreal,” said Foster. “I’m so proud of all the girls who came out here today and wrestled.”

Photos from the finals of the MHSA Girls Wrestling State Tournament at Lockwood High School in Lockwood on Saturday, Feb. 20, 2021.

Kalispell Flathead’s wrestlers pose for pictures with the Girls Wrestling State Championship trophy after the finals at Lockwood High School on Saturday, Feb. 20, 2021.