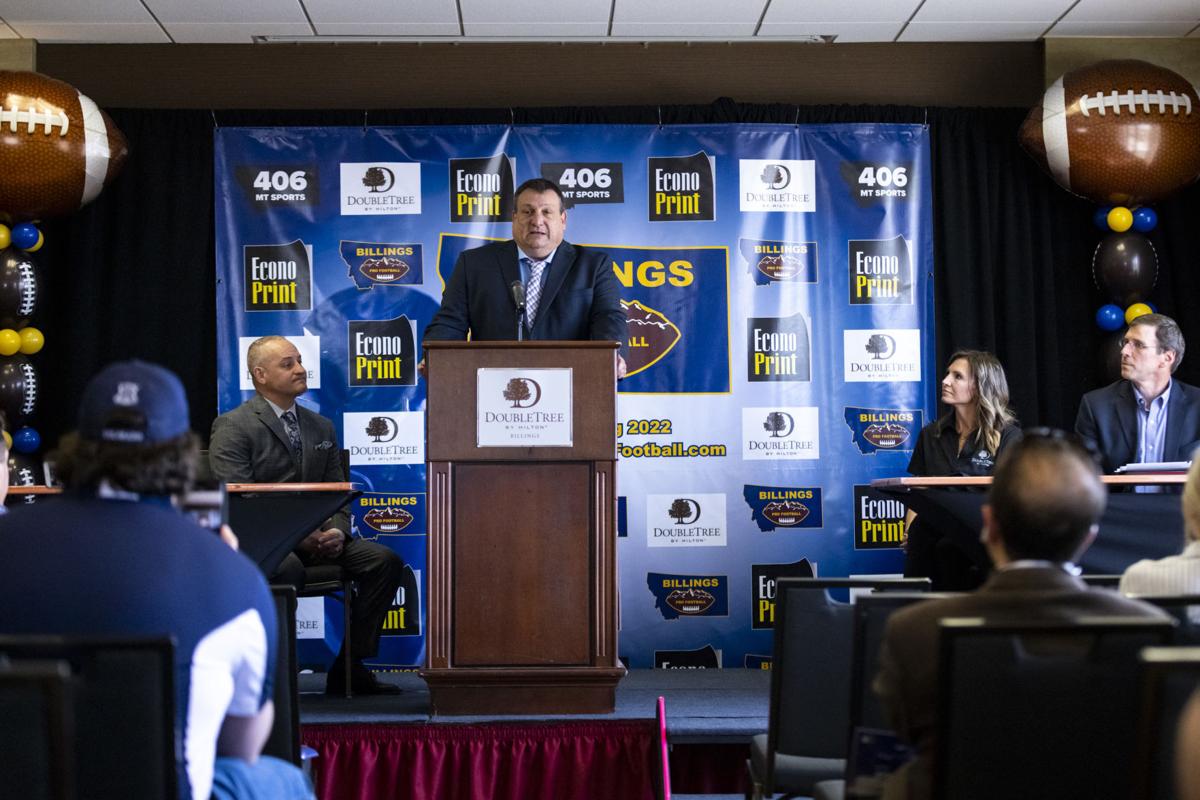 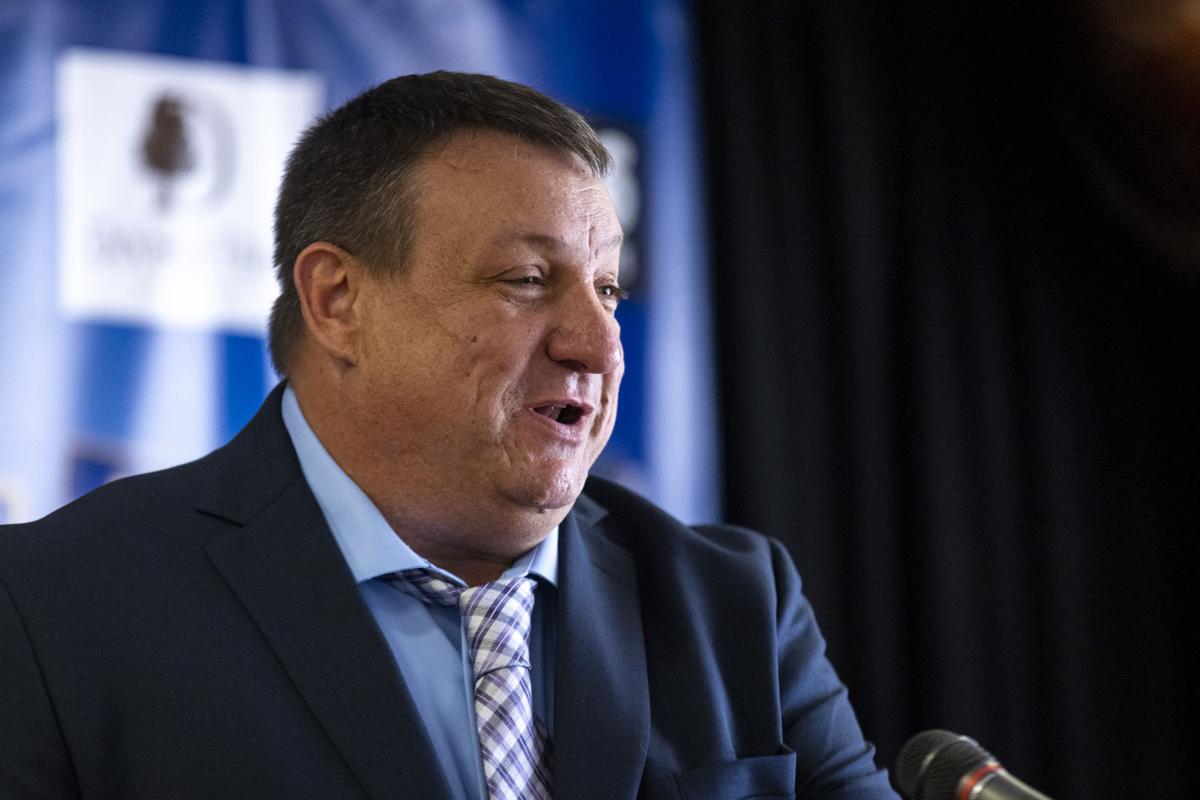 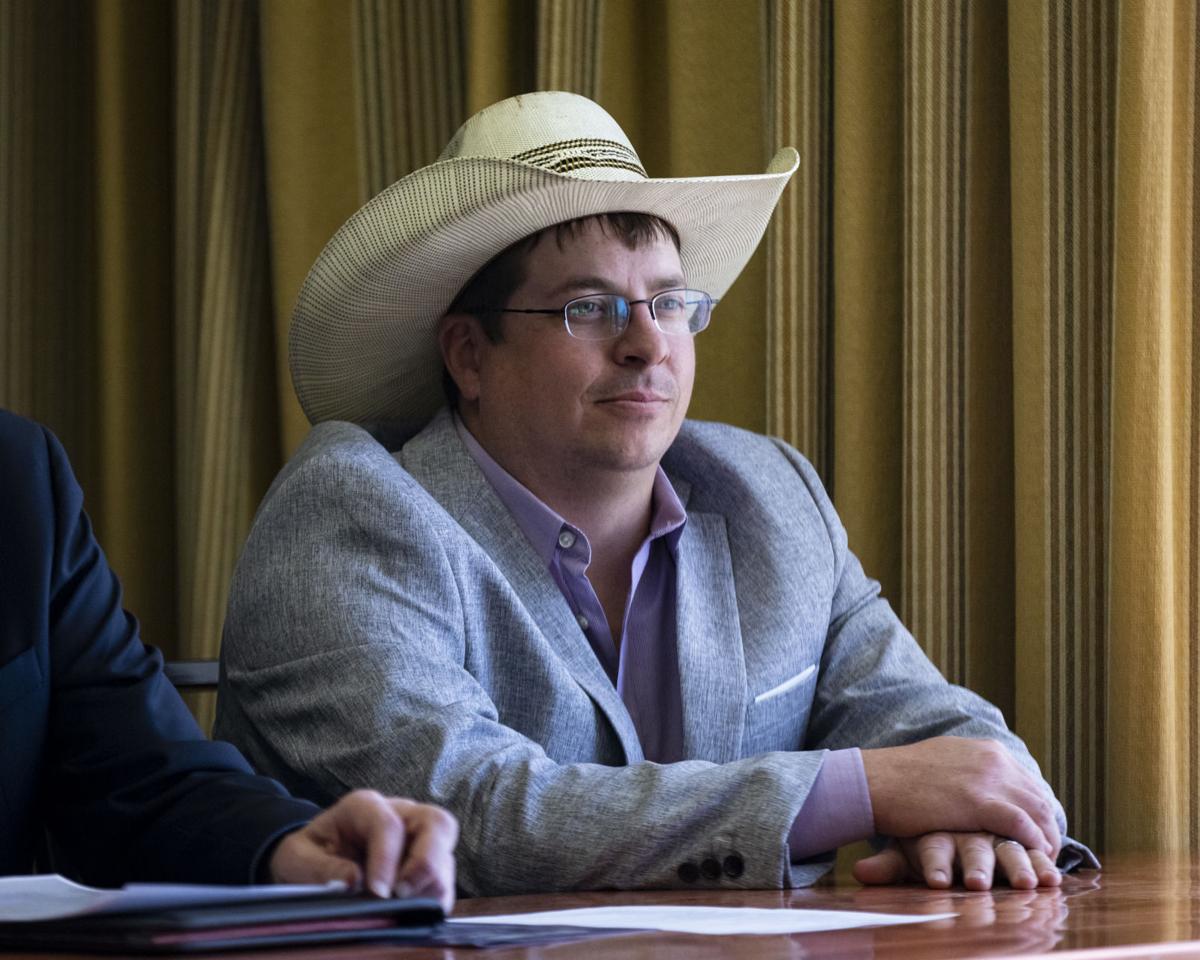 Tel Koan, co-owner of the new Billings indoor football franchise, listens during a media event introducing the team at the DoubleTree Hotel in Billings on Friday. 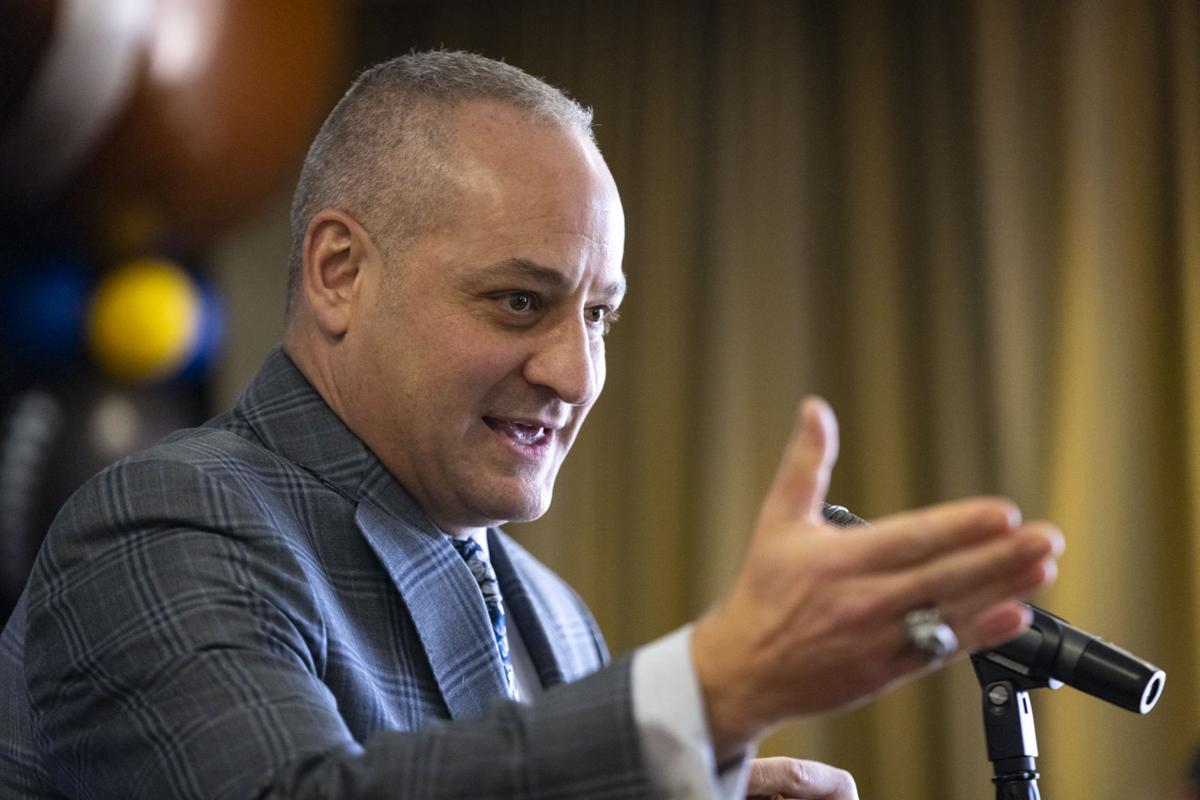 Tommy Benizio, owner of Benzio Sports, addresses the crowd during a media event introducing the new Billings indoor football team at the DoubleTree Hotel in Billings on Friday. 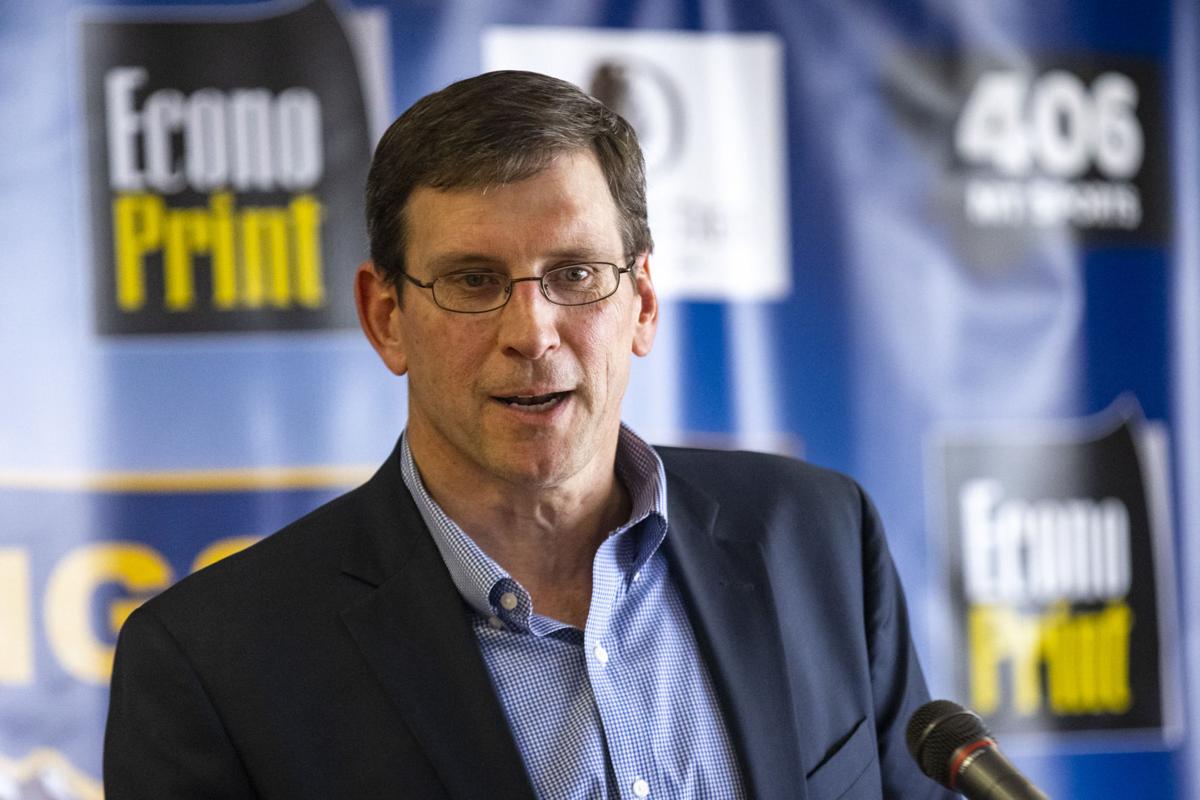 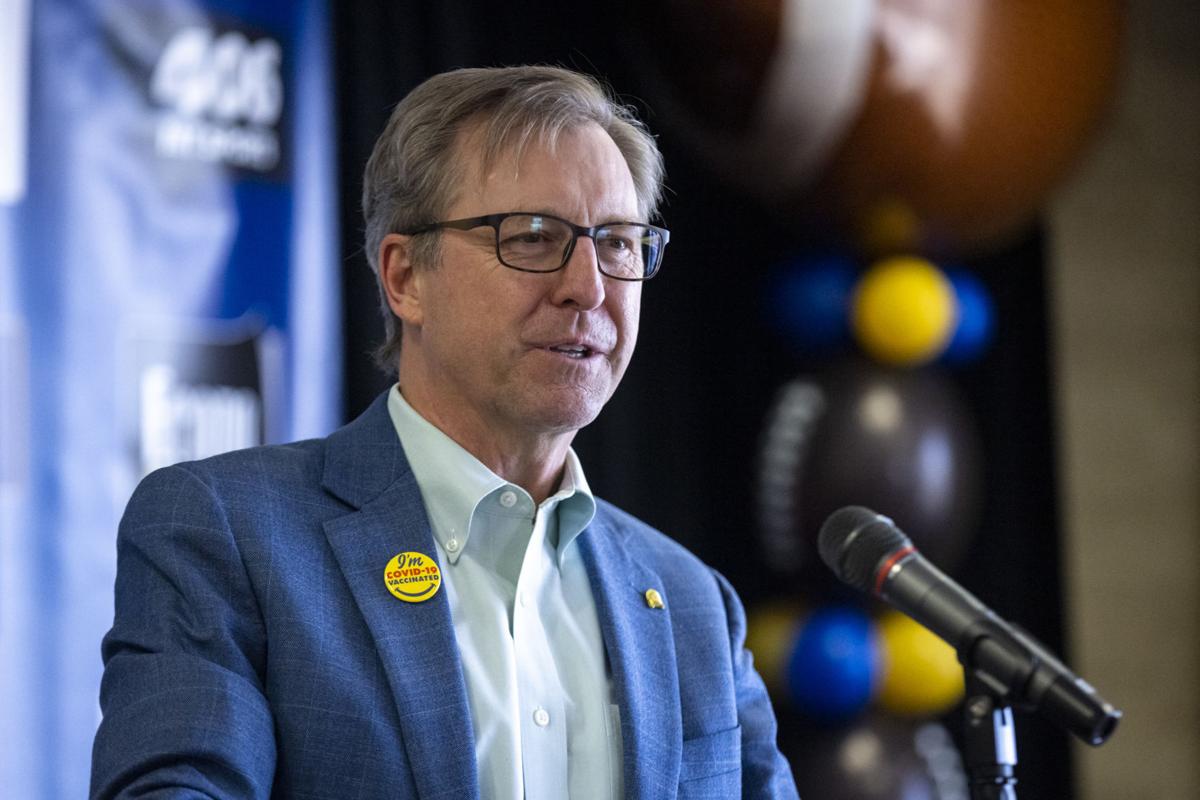 BILLINGS — Keith Russ and Tel Koan have learned on the fly during their first year as co-owners of the Wyoming Mustangs indoor football league franchise.

But perhaps their greatest lesson is this: Give the people what they want.

Thus, indoor football is making a ceremonious return to Billings.

During a lively press event Friday at the DoubleTree Hotel downtown, Russ and Koan, proprietors of Pick-Six Entertainment, LLC, officially announced plans to launch a new professional indoor team in Billings that will join Champions Indoor Football, a league with franchises based in the upper Midwest down through Texas.

The as-of-yet named Billings team will begin competition in March of 2022 and play its home games at First Interstate Arena at MetraPark. Yellowstone County commissioners gave their approval for indoor football's return to Metra earlier this week.

“As we were building the (Wyoming franchise) we weren’t satisfied with having one team,” said Russ, who also serves as head coach of the Wyoming franchise. “You can do a lot with one team but you can do more with two teams.

“So we started looking at other locations and tried to keep it close. We looked at Billings, we checked it out and met a lot of good people, and it almost felt like home.”

The first-year Wyoming franchise, which is located in Gillette, Wyoming, and also competes in CIF, has proven to be wildly popular in that community with nearly 15,000 tickets sold through the first four games of the 2021 season, according to a recent report in the Gillette News Record.

Billings, with a history of indoor football that dates back two decades, has consistently supported the sport in the past with considerable ticket sales and large crowds. It adds up to a perfect formula for success again, Koan said.

“Billings was a great candidate because of the fans,” he said. “We pride ourselves in community involvement. Those past franchises did great and we’re going to step in and try to do the same.”

“Billings is a sports town,” Mayor Bill Cole told Russ and Koan. “The people are good, the town is good, and I think you’ll feel comfortable and this will be a great business venture. You’ll enjoy Billings but Billings will enjoy you.”

The new franchise will be the latest iteration of indoor football in the Magic City. Previous teams, most recently, included the Billings Outlaws and Billings Wolves, both of which eventually ceased operations.

This new team, Russ said, can be different.

“I think a lot of it is our passion — mine and Tel’s passion for this,” Russ said. “We’re willing to do whatever it takes to keep it going. We’ve learned a lot in Gillette, and it’s really booming. We sell out every game there. So we’re going to bring that knowledge of what’s worked, and I think that’s what will keep it going.”

Russ and Koan will be assisted along the way by Tommy Benizio, the owner of Benizio Sports, which specializes in marketing, business affairs and game-day operations.

Benizio told the large crowd gathered Friday that a name-the-team contest had been initiated in order to give fans and community members a sense of ownership of the franchise.

“The conversation turned from, ‘Why are we picking the name? Why don’t we let the community pick the name?’ It’s their team, we’re just here to help facilitate it,” he said.

Contest finalists will be presented on May 7, at which time it will be put up to a public vote. To cast a vote, log on to www.billingsindoorfootball.com, or visit Econo Print in downtown Billings.

The Billings Gazette and 406mtsports.com have designed the online platform and technology that will power the name-the-team contest.

“It’s a great way to engage the public and get them excited about what’s going on.”

Help us name our indoor arena football team by giving us ideas on what our team name should be.

Russ and Koan also released a projected timeline of announcements for their new franchise. Notably, a head coach is expected to be named by June. Season tickets will go on sale next month.

Champions Indoor Football is currently made up of six teams during the 2021 season — Wyoming, the Omaha Beef (Nebraska), the Salina Liberty (Kansas), the Sioux City Bandits (Iowa), the Wichita Force (Kansas), and the Dodge City Law (Kansas). The Amarillo Venom (Texas), West Texas Warbirds and Oklahoma Flying Aces are inactive this year.

Aside from Billings, an expansion team in Denver is expected to join the league in 2022 to make it a 10-team conglomerate.

The CIF season begins in March and plays a 12-game regular-season schedule that concludes in June. The playoffs are completed in July.

“I think we’re going to have a lot of fun here, and we look forward to building this team,” Russ said.

MSU Billings athletics has three paths forward as it seeks a new athletic director. Reinstating football is the surest way to escaping its current malaise.

Tel Koan, co-owner of the new Billings indoor football franchise, listens during a media event introducing the team at the DoubleTree Hotel in Billings on Friday.

Tommy Benizio, owner of Benzio Sports, addresses the crowd during a media event introducing the new Billings indoor football team at the DoubleTree Hotel in Billings on Friday.