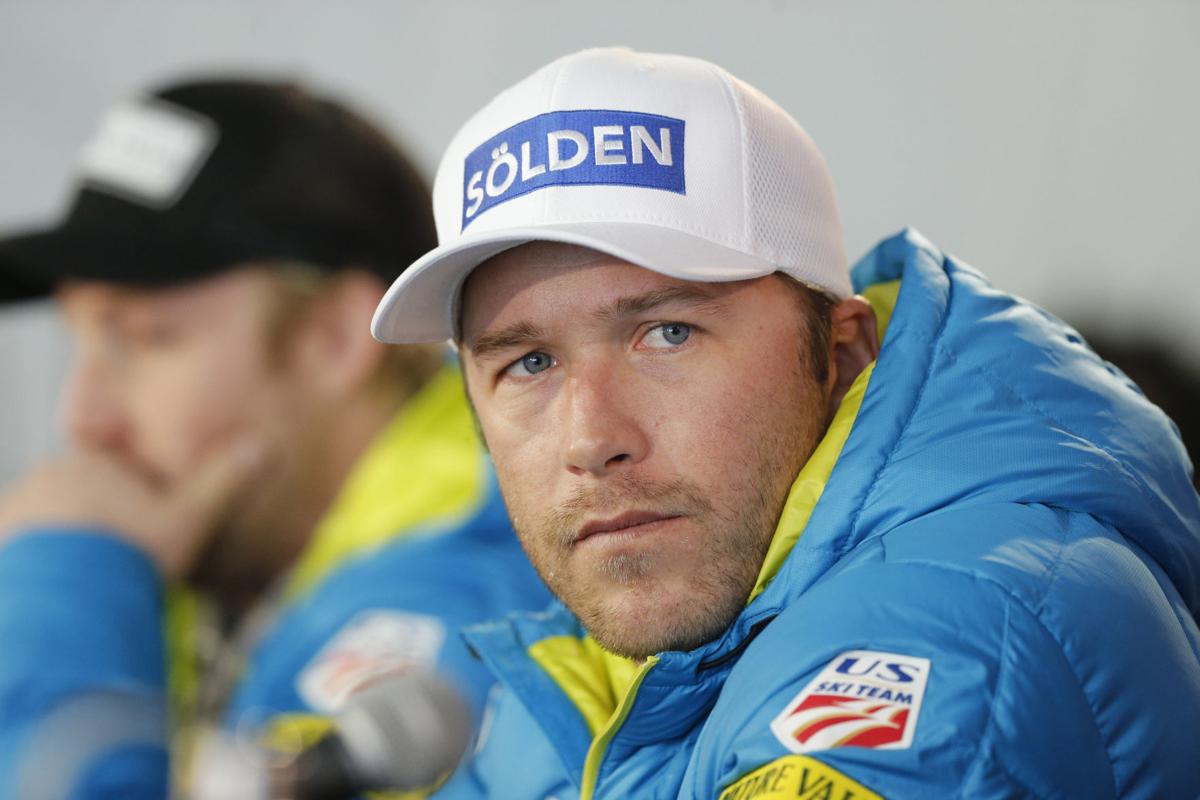 After the death of his daughter, Bode Miller and his wife Morgan have moved their family to Montana to live part-time. 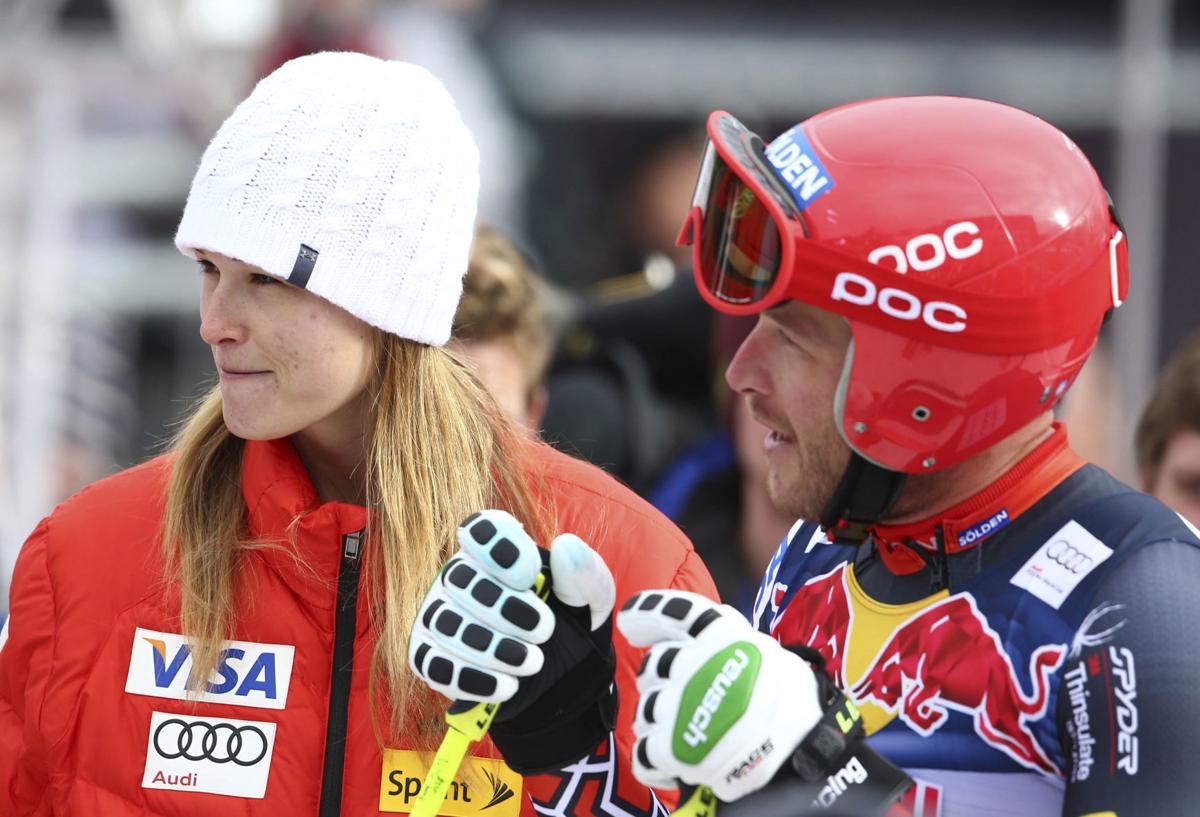 In this Jan. 23, 2014, file photo, Bode Miller talks to his wife, Morgan, in the finish area of men's skiing World Cup downhill training in Kitzbuehel, Austria. Miller is moving his family to Montana part time after a tumultuous year that included the tragic drowning of his toddler daughter. Miller says 19-month-old Emeline Miller's death made him sharpen his focus on his four other children, and with twins due this fall, he decided the time was right to head to the mountains. The family will split their time between homes in Southern California and Big Sky.

HELENA — Retired U.S. downhill skier Bode Miller decided a change of scenery was needed after a tumultuous year in which he experienced the tragic death of his toddler daughter, the birth of a son and now the expected arrival of twin boys this fall.

So the 41-year-old six-medal Olympic champion and his pregnant wife, Morgan, headed to the Montana mountains with four children in tow to settle into a new home near Big Sky Resort north of Yellowstone National Park. There, he plans to give his California-raised children a modernized taste of his childhood in northern New Hampshire, where he and his hippie parents lived in a home without running water or electricity.

"After losing Emmie, we definitely reflected on how we were raising our kids," Miller told The Associated Press in a recent interview. "We felt like there was enough missing from our experience and their upbringing in Southern California that we needed to look at other options."

Emeline Miller drowned in a backyard pool in June 2018 after she slipped out the back door of a neighbor's house that the 19-month-old girl and her mother were visiting outside Los Angeles. Four months later, as Bode and Morgan Miller dealt with their grief, their son Easton was born and joined the family that already included another girl and two boys.

Miller said he spent time after his daughter's death questioning what he could have done differently, and then he sharpened his focus on his other children. Drawing from his childhood in Franconia, New Hampshire, he concluded they needed to move closer to nature and live in a small community to bond as a family and instill values like independence, self-reliance and grit.

With the twins due in November, Miller decided the time was right.

"When you get a true sense of the possible shortness of life - nobody knows what's around the corner - it's not something you want to put off," Miller said. "It changed a bit our intensity of how we deal with our time and our family and our priorities."

Morgan Miller has said the family keeps Emeline with them by sharing memories and imagining having her with them, and that she wants to make sure their children are getting the best of their parents and out of life.

"It's a battle every day to get up out of bed," she told NBC's Today in August. "But to see them and see the joy through their eyes and to live vicariously through all of their daily experiences makes each day just a little bit easier."

The family plans to split their time throughout the year between their new home in Montana and their current home in Coto de Caza, an upscale Los Angeles suburb.

In Montana, Bode Miller will have a new role as the face of the ski communities Spanish Peaks Mountain Club and Moonlight Basin adjacent to Big Sky Ski Resort,ppr about 25 miles (40 kilometers) north of Yellowstone. Communities scattered across the slopes include the Yellowstone Club, an exclusive resort for the ultra-rich. The Millers will live in nearby Spanish Peaks, another upscale development.

Bode Miller will act as the communities' brand ambassador, working on its ski programming, running camps and helping develop the booming ski area.

He and Morgan, a former professional volleyball player, also plan to continue their campaign to educate parents about water safety for young children.

"It was a horrible experience, losing a child," Bode Miller said. "The loss was brutal, but we have an amazing family, and we have a unique ability to really live a spectacular life and move forward, and also to show each other and show the rest of the world what that healing process can look like."

Bode Miller is the most decorated male skier in U.S. history with 33 World Cup wins, two overall titles, four world championships and six Olympic medals. He built a reputation as a brash risk-taker who enthralled audiences that would tune in just to see whether he'd win or crash trying.

His 19-year professional skiing career ended with a crash in the 2015 world championships in Beaver Creek, Colorado, that severed his hamstring tendon. He formally retired in 2017.

Now, nearly four years after that race, his time on the slopes is spent mostly with his 11-year-old daughter, his 6-year-old son and his 4-year-old son, who is just learning how to ski. Bode Miller said he enjoys skiing as much as ever, but he harbors no thoughts of a comeback.

"I'm pretty glad to have it behind me, honestly," he said. "I feel like it was a great phase, but I'm definitely past it and don't really have any desire to do it again or look back on it."

Bode Miller said he'll always be involved in downhill skiing because he loves the sport and the people in it, but his long-term plans are unclear.

He tried his hand at broadcasting during the 2018 Winter Olympics, but he was panned for his monotone delivery and had to apologize for suggesting that another skier's decline may have been caused by her getting married.

He's not closing the door on broadcasting but acknowledged he'd have to do it more regularly to get better.

"It can't be once every four years for the Olympics," he said. "That didn't make sense to me. I don't think I would ever really improve doing it that way."

After the death of his daughter, Bode Miller and his wife Morgan have moved their family to Montana to live part-time.

In this Jan. 23, 2014, file photo, Bode Miller talks to his wife, Morgan, in the finish area of men's skiing World Cup downhill training in Kitzbuehel, Austria. Miller is moving his family to Montana part time after a tumultuous year that included the tragic drowning of his toddler daughter. Miller says 19-month-old Emeline Miller's death made him sharpen his focus on his four other children, and with twins due this fall, he decided the time was right to head to the mountains. The family will split their time between homes in Southern California and Big Sky.