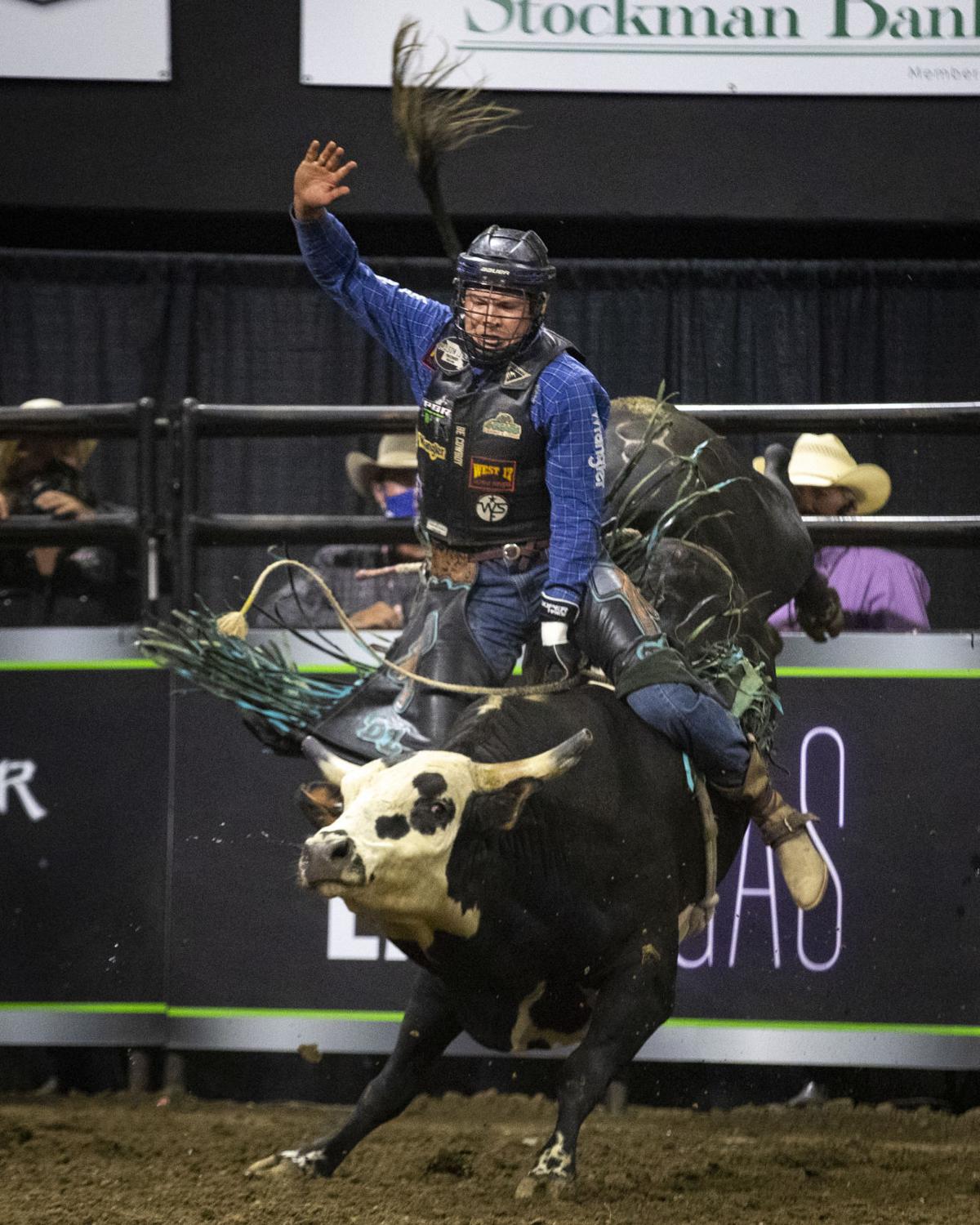 Browning's Dakota Louis rides Notorious during the second night of the PBR Unleash the Beast Ariat Invitational at First Interstate Arena at MetraPark on Sept. 12. 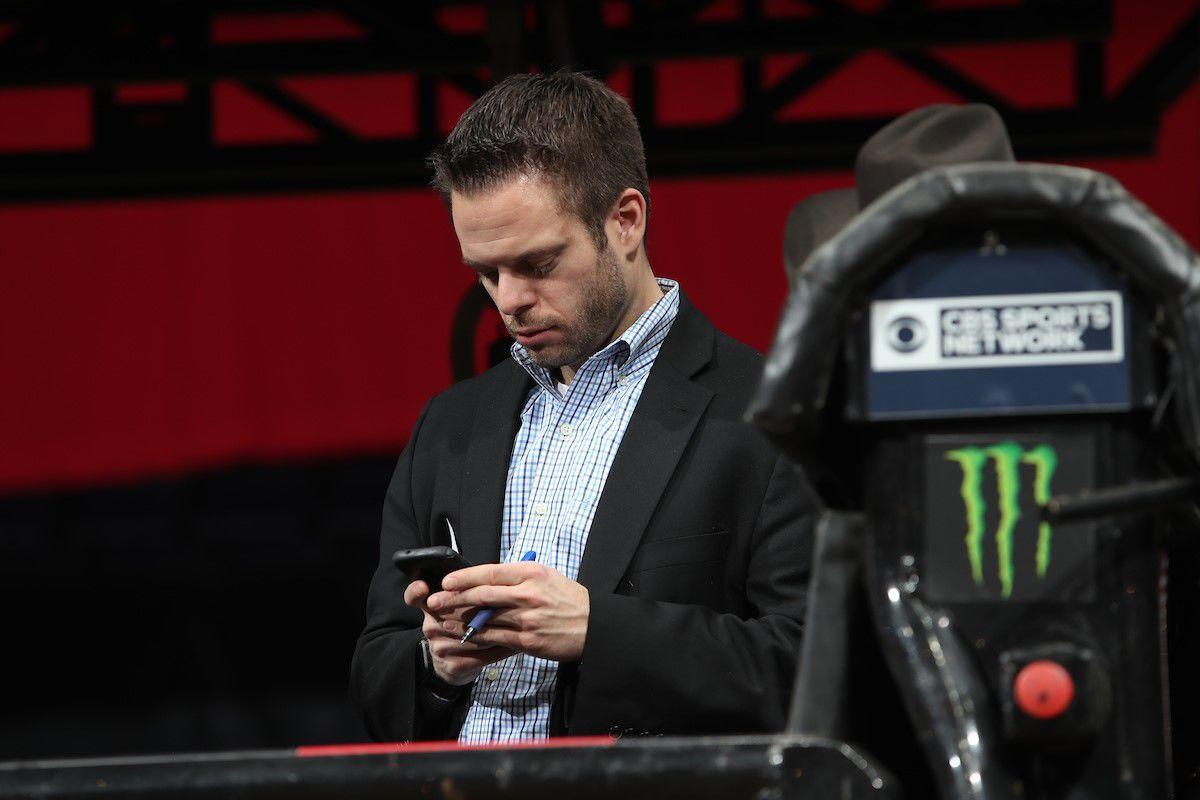 PBR Insider Justin Felisko is pictured while reporting on a PBR event. Felisko, the PBR's senior writer/editor, recently spoke to The Billings Gazette and 406mtsports.com about the upcoming Velocity Tour Finals.

The Browning cowboy, ranked 40th in the world, will be competing at the Pendleton Whisky Velocity Tour Finals Friday and Saturday at the Denny Sanford Premier Center.

He is one of 45 cowboys competing at the $80,000 PWVT Finals, including top-ranked Jose Vitor Leme, world No. 2 Joao Ricardo Vieira and fourth-ranked Daylon Swearingen.

Louis will be matched with Spanish Angel in the first round on Friday. For the 28 year old, there are multiple ways he can advance to the World Finals Nov. 12-15 in Arlington, Texas, at AT&T Stadium, home of the Dallas Cowboys.

The top 35 healthy and active riders in the world standings at the conclusion of the PWVT Finals will advance to the World Finals.

According to PBR Insider Justin Felisko, a rider can earn 105 points in Sioux Falls if he were to win all three rounds.

“Dakota Louis is very much in control of his destiny,” said Felisko in an interview with The Billings Gazette and 406mtsports.com. “If he can go to Sioux Falls and ride his bulls, he can get to the World Finals.

“It’s as good of an opportunity as Dakota has ever had to get to his first World Finals.”

Jess Lockwood of Volborg, the defending PBR world champion, is ranked fifth. Lockwood suffered a sprain of his right shoulder when competing at a PBR event in Lincoln, Nebraska, on Oct. 3 and won’t be competing in Sioux Falls.

“He (Lockwood) is focusing on being as healthy as possible with his shoulder injury and is focusing on making a World Finals run at Arlington,” said Felisko.

Lockwood’s brother, Jake Lockwood, also won’t be competing in Sioux Falls and is out with an injury said Felisko. The 45th-ranked Jake Lockwood suffered a left ankle and foot injury in Lincoln.

It was reported in late October that Columbia Falls’ Matt Triplett would have hip surgery and miss the World Finals.

The Velocity Tour is where riders try and prepare and qualify for the PBR’s elite series, the Unleash The Beast Tour. Riders can also earn points that are applied to the overall world standings at Velocity Tour events.

This weekend will be “nail biting” for the riders hoping to earn a berth into the World Finals and there will be “plenty of scoreboard watching and double checking the math on the calculator,” said Felisko, who is the PBR’s senior writer/editor and also appears on some PBR television broadcasts and contributes to RidePass.

In addition to the riders trying to earn a spot at the World Finals, there are those who will be competing in Sioux Falls hoping to earn valuable points to help position them to make a world title run in Arlington.

Along with the points available, another incentive this weekend is the $35,000 bonus the Velocity Tour champion earns.

“Any rider competing in Sioux Falls has the opportunity to walk out with the Velocity Tour championship,” said Felisko.

Last year Leme, who leads Vieira by 459.09 points, won the Velocity Tour Finals. He was the overall tour champion and event champion and is trying to become the first rider to repeat as the tour’s overall and final event champion according to Felisko.

Leme won the Ariat Invitational, an elite series event, with a 4-for-4 weekend when the PBR stopped at First Interstate Arena at MetraPark Sept. 11-13.

“Joao Ricardo Vieira, the No. 2 ranked rider, is also competing in Sioux Falls. They want to make sure they can do all they can to win the World Finals.”

Defending champion overcame injuries this season to finish fifth in the overall standings.

Check out who posted the best scores and times.

Event will take place on Saturday and be broadcast on CBS Sunday.

ARLINGTON, Texas — Jose Vitor Leme scored a 95.75-point ride to win the round and clinch his first Professional Bull Riders world championship at the World Finals on Saturday at AT&T Stadium.

Volborg cowboy will be trying to repeat his World Finals triumph and capture a third overall world title.

Second-ranked Joao Ricardo Vieira won't ride at the event as he failed to clear the PBR's COVID-19 screening protocols.

Browning's Dakota Louis rides Notorious during the second night of the PBR Unleash the Beast Ariat Invitational at First Interstate Arena at MetraPark on Sept. 12.

PBR Insider Justin Felisko is pictured while reporting on a PBR event. Felisko, the PBR's senior writer/editor, recently spoke to The Billings Gazette and 406mtsports.com about the upcoming Velocity Tour Finals.