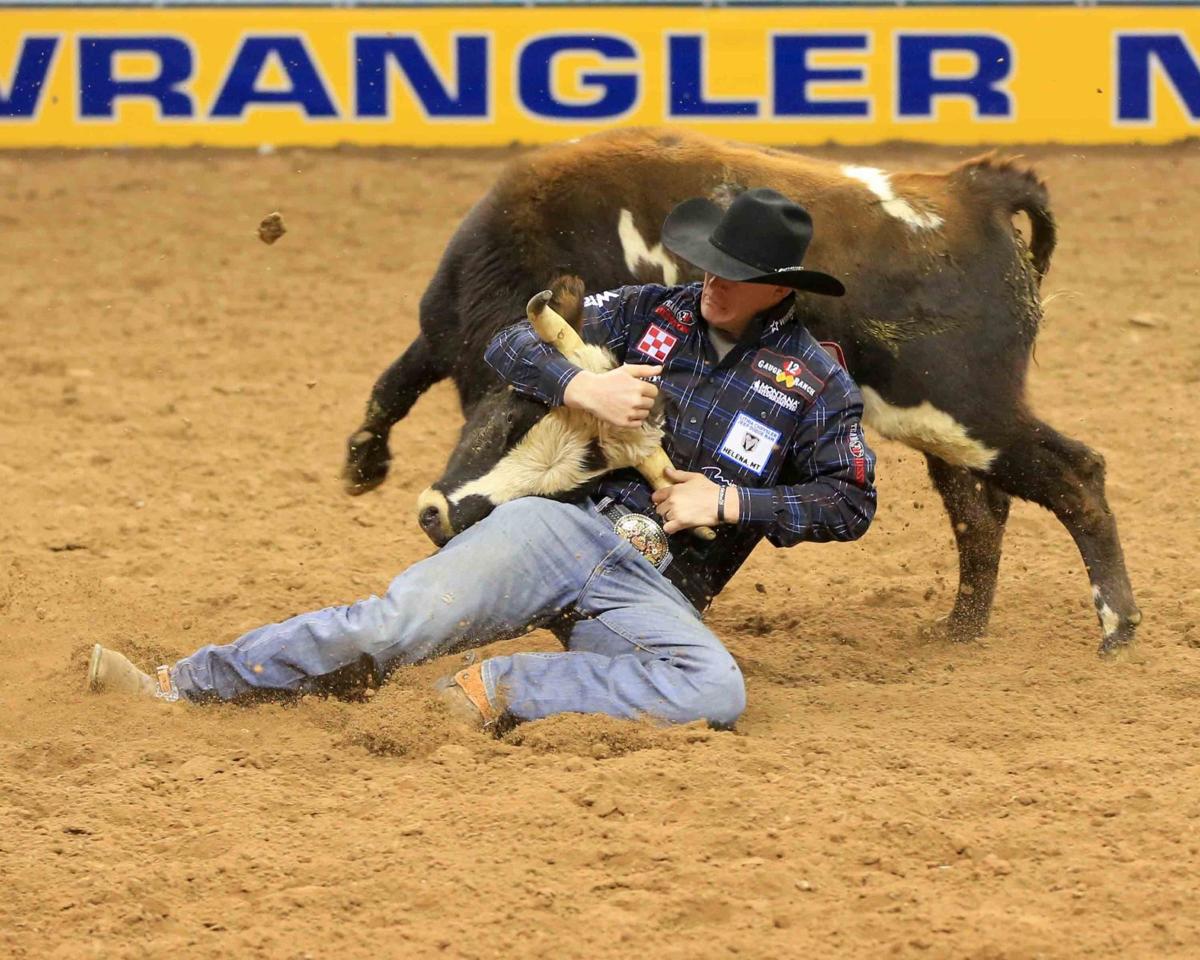 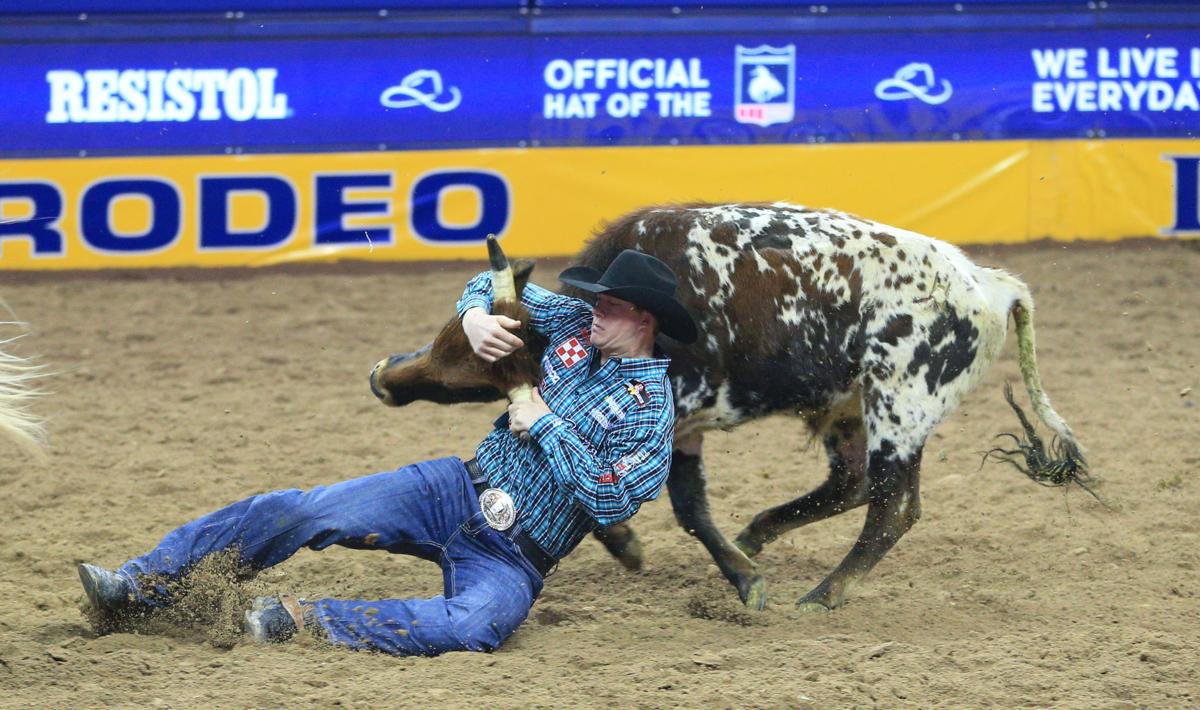 Ty Erickson of Helena shows the form that won him the steer wrestling competition at the National Finals Rodeo on Friday night and moved him back into first place in the world standings entering the final day. 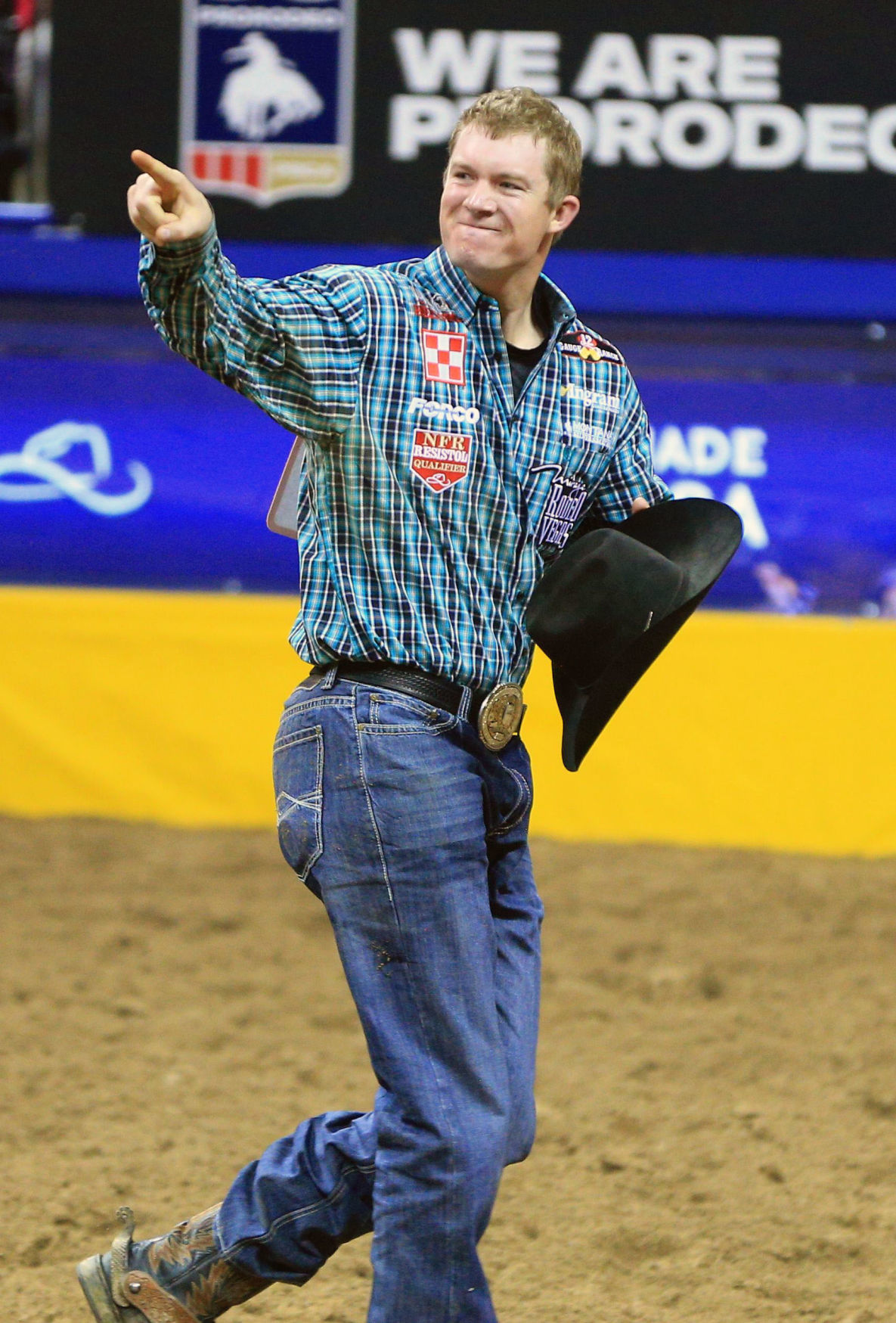 Ty Erickson of Helena points to the crowd Friday after winning the steer wrestling.

Ty Erickson of Helena shows the form that won him the steer wrestling competition at the National Finals Rodeo on Friday night and moved him back into first place in the world standings entering the final day.

Ty Erickson of Helena points to the crowd Friday after winning the steer wrestling.

LAS VEGAS — Helena's Ty Erickson won the steer wrestling competition going away Friday in Round 9 and moved back to No. 1 in the world standings at the National Finals Rodeo at the Thomas & Mack Center.

Erickson's time of 3.60 seconds was more than a half-second better than Tyler Pearson of Louisville, Mississippi (4.20). He took home $26,231 and took the No. 1 slot after J.D. Struxness of Appleton, Minnesota, finished out of the money and Tyler Waguespack of Gonzales, Louisiana, who has been No. 1 in average all week, failed to register a time, dropping to 11th in average and fourth in the world.

Saturday is the final day of the NFR.

“Anytime you can get a round win at the Wrangler National Finals Rodeo, it’s exciting,” Erickson said in a PRCA press release. “I’m so happy I was able to get a go-round win, especially with the week I’ve been having. It’s been a little slow, and I knew when I drew the steer I had tonight I had a chance. I just tried to go back to fundamentals and make the best run I could, and it worked out.”

It was Erickson’s first round win of this year’s Finals. He also is fifth in the average with a 58.3-second time on nine head.

The first eight rounds were not easy on Erickson.

“This week’s been a struggle for me, but I feel like I’ve been bulldogging really good and my horse has been working great,” he said in the release. “It just hasn’t been coming together. So, I haven’t been getting frustrated at all and have just been going at them every night. Tonight, I finally got a decent chance, and everything came together. I couldn’t be happier.”

With his first world championship within reach, Erickson is maintaining perspective.

“Honestly, I’m not even going to think about it,” he continued in the release. “I’m just going to keep going at it like I have every round, just try to stay focused on getting a good start, making a good run on the ground and see where the chips fall.”

Matt Reeves of Cross Plains, Texas, now ranks first in average in steer wrestling but is 13th in the world entering the final night. Riley Duvall of Checotah, Oklahoma, is second in average but 14th in the world.

In other events involving Montanans at the NFR on Friday:

• Miles City's Haven Meged finished ninth in tie-down roping with a time of 8.40 but remained first in average and seventh in the world standings.

• Helena heeler Chase Tryan and partner Brenten Hall were third in team roping with a time of 4.40. They earned $15,653.85. Tryan moved into second in the average and fifth in the world standings.

• Chase Brooks of Deer Lodge failed to stay aboard his saddle bronc and didn't register a score. Brooks is tied for eighth in average and sixth in the world standings.

• Bridger Chambers of Butte was sixth in steer wrestling with a 4.70, leaving him fourth in average and seventh in the world standings.

• Billings' Clay Tryan and partner Jake Long didn't achieve a time in team roping. Tryan is eighth in the world and 13th in average.

• Lisa Lockhart, a native of Vida, had a time of 14.19 in barrel racing. Lockhart is seventh in average and sixth in the world.

• Hailey Kinsel Lockwood, PBR bull riding champion Jess Lockwood's wife, finished first in barrel racing for the third straight night with a 13.64. She is fifth in average and remains first in the world standings.