Preparing for another NFR, Clay Tryan back home in Billings at Wrangler Team Roping Championships Finals
Share this
{{featured_button_text}}
1 of 5 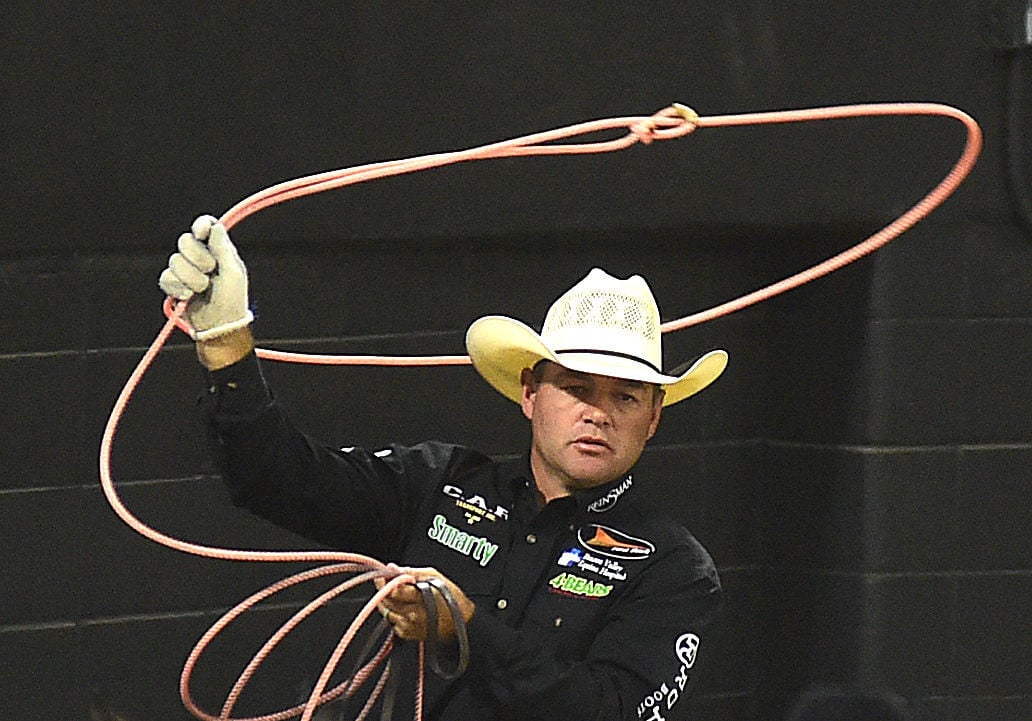 Clay Tryan, pictured at the Wrangler Team Roping Championships Finals at First Interstate Arena at MetraPark on Monday, will be competing at his 18th National Finals Rodeo in December. 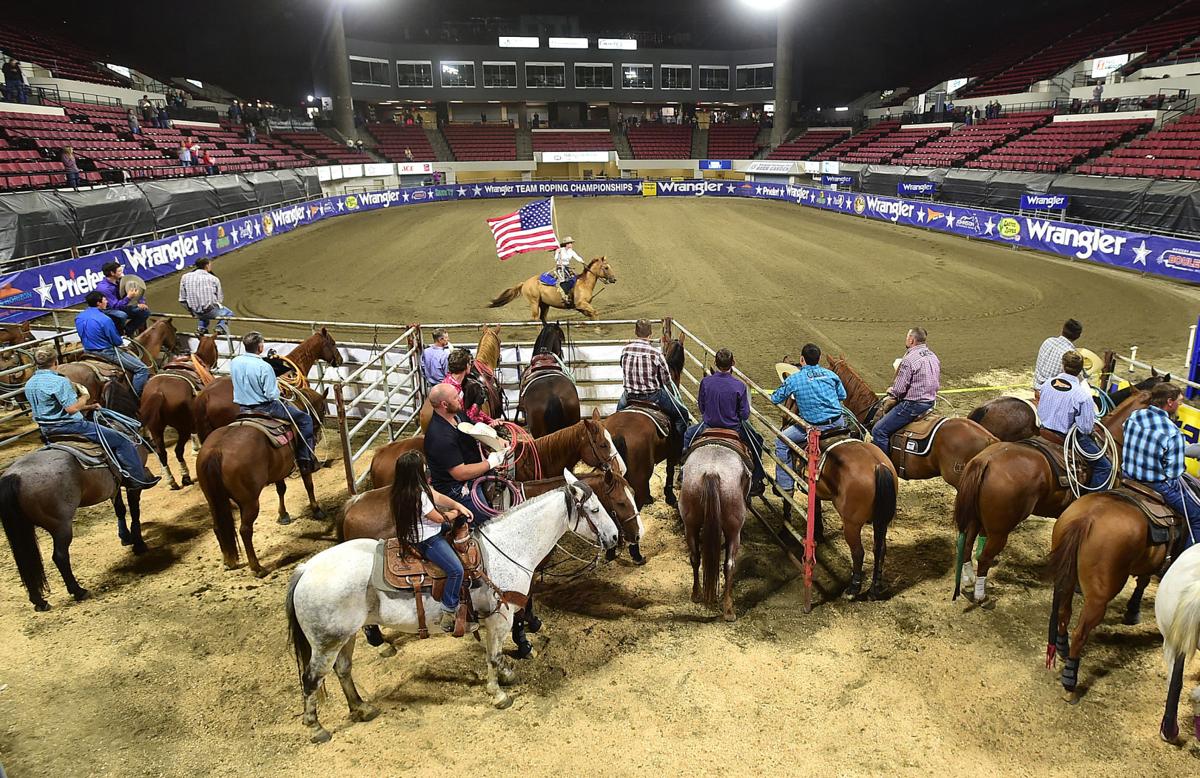 Riders watch the opening ceremony at the Wrangler Team Roping Championships Finals at First Interstate Arena at MetraPark on Monday. 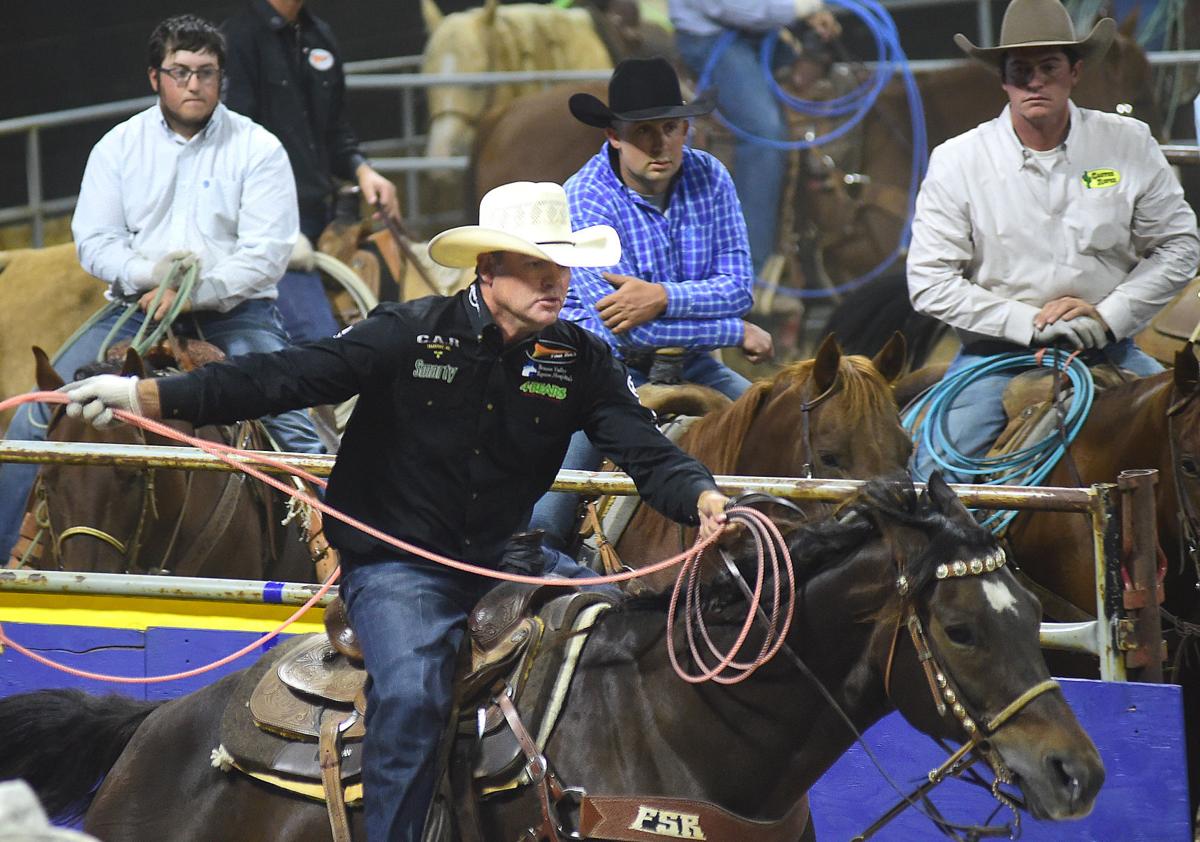 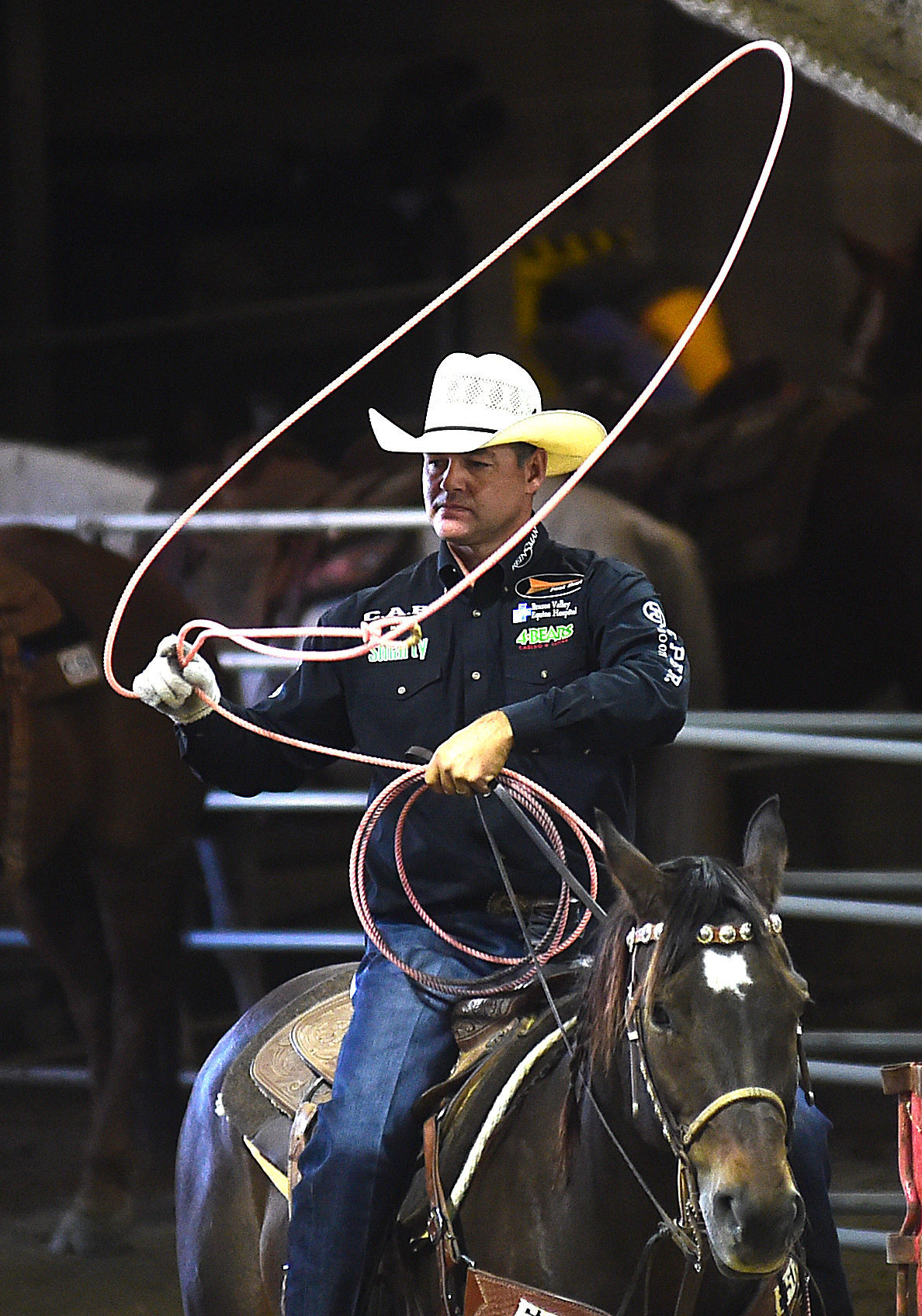 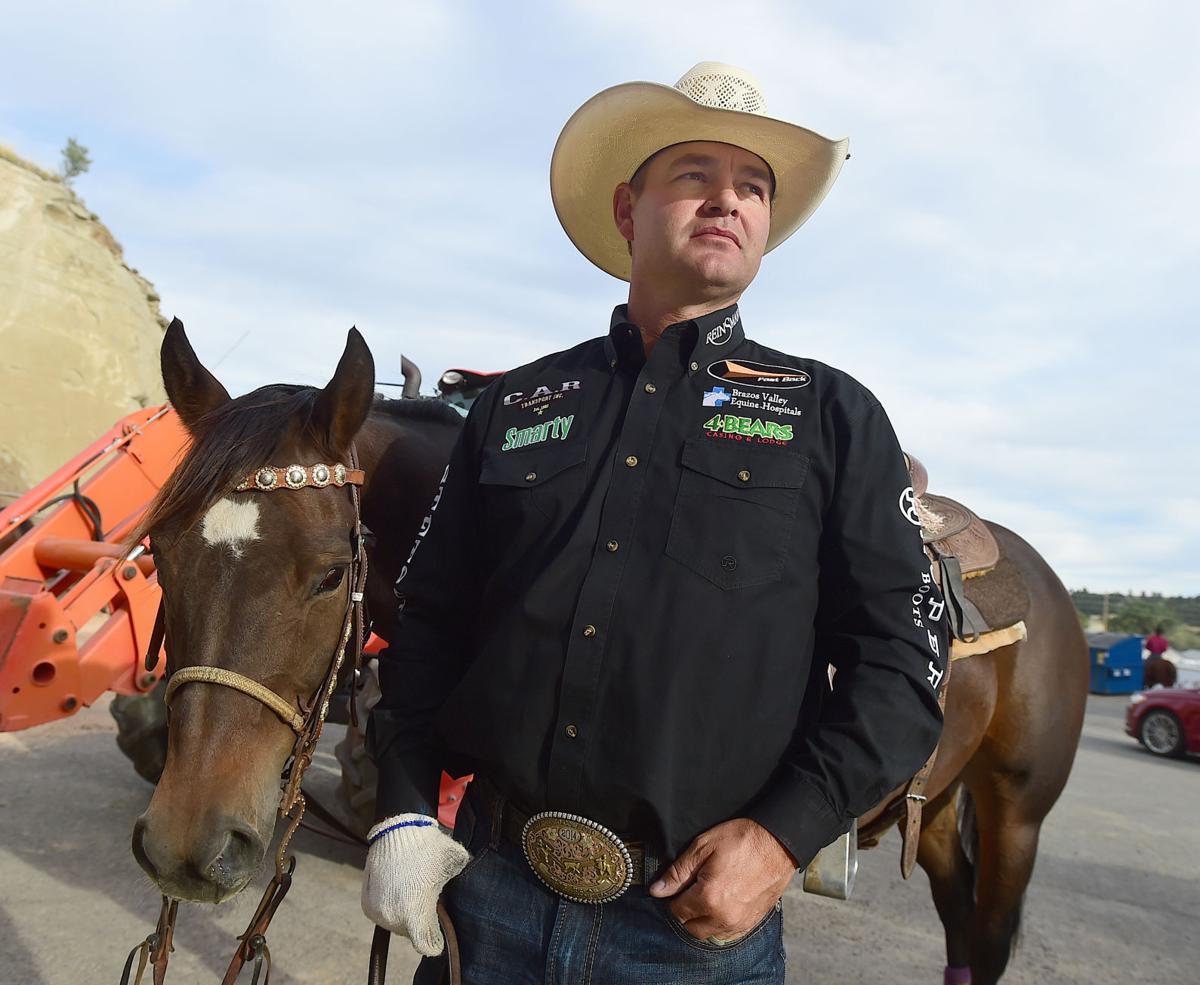 BILLINGS — In a little over two months, Billings cowboy Clay Tryan will be competing in his 18th National Finals Rodeo.

But on Monday evening, the three-time world champion team roper was competing at the Wrangler Team Roping Championships Finals at First Interstate Arena at MetraPark.

The seven-day WTRC Finals began Monday evening and runs through Sunday at First Interstate Arena and the Expo Center at MetraPark.

Tryan was entered in the first two days of competition with his sons Tyler (14) and Braylon (12). His son Dash (6) is too young to compete now, but may in a few years said Tryan. Roping is a family adventure for the Tryan family, as Clay’s wife, Bobbie, is also entered in this week’s competition.

The WTRC Finals is celebrating its 15th anniversary this year. Clay’s father, Dennis Tryan of Huntley, is the owner of the circuit.

“It’s just a great event and my dad puts it on. It’s a good event and I like to rope,” Clay said. “I come up to help out if I can, but I don’t do much. My whole family ropes in it.

“It’s fun. I look forward to it. We practice all the time together. … You never know, we might just win something.”

Tryan, 41, said he’ll compete in the open division on Wednesday night. The open competition Wednesday night should begin around 7 p.m. and conclude at approximately 11 p.m. It is a non-ticketed event, and traditionally the crowd mainly consists of the ropers’ family and friends, but spectators are welcome free of charge.

On Wednesday, Tryan said he’d be roping with Jake Long, whom he will rope at the NFR with. He said he’d also team with Travis Graves and Junior Nogueira on Wednesday.

Included in the open will be several other pros, and quite a few former NFR qualifiers, Tryan said.

“If you want to see some good team roping, come Wednesday night,” he said.

Tryan recalled competing and practicing at the MetraPark grounds in high school and said he had competed in both the NILE PRCA rodeo and Northern Rodeo Association events at MetraPark.

Tryan joined the PRCA after becoming eligible after turning age 18 in 1997, but before that competed in the NRA, where he “learned the ropes.”

“I’ve roped in everything they’ve had here at one time or another,” said Tryan, as he stood outside Metra near the overhead door entrance to the arena floor leading to the chutes.

And while Tryan is competing at the WTRC Finals, the competition is a different environment than a PRCA rodeo.

“I grew up here,” said Tryan. “A lot of people I roped against or with I get to see them.”

While Tryan resides in Lipan, Texas — “kind of like golfers go to Florida, the team ropers go to Texas” — where he owns some land with a roping arena, he’ll always call Montana home. That is why on his PRCA biography Tryan still lists his current residence as Billings.

“I always tell people in Texas when they ask why I don’t change it is that I wouldn’t live here if I didn’t do well growing up in Billings, Montana,” said Tryan.

This year, the coronavirus pandemic was hard on the Western sports world of rodeo, just like it was on high school, collegiate and professional sports leagues. Many events were canceled, including high-paying rodeos.

Tryan was still able to compete at “53 or 54” events and in a traditional year he would make 65. However, with many of the high-paying rodeos canceled it was harder for all the cowboys to either make up ground fast, or put more distance between themselves and those trailing them in the standings.

“It was tough,” Tryan said. “There was a lot of driving. It was a different schedule. I went to some places I hadn’t in my 20-year career. We had to go to where they had the rodeos.”

Included in Tryan’s season have been wins at Forsyth, Prescott (Arizona), and Rapid City (South Dakota). He was the co-champion at the National Western Stock Show and Rodeo in Denver and the Mesquite (Texas) Championship Rodeo.

While it won’t be easy, Tryan said he has a chance to pass Brown for the title. Last year a round win at the NFR was worth $26,231 and the average champion earned $67,269.

Clay Smith of Oklahoma, who won last year’s team roping headers standings — Tryan finished 10th in the world — for his second straight world title, is second in the standings with $69,703.55. Brenten Hall of Oklahoma is 15th with $47,144.92. The top 15 qualify for the NFR, which is Dec. 3-12 at Globe Life Field in Arlington, Texas.

“It’s the same every year, just try to rope good,” said Tryan, who has career earnings of $2,586,172, according to his PRCA biography on prorodeo.com. “Every year is a different year and a different situation comes up, but if you are on your game you can deal with anything.”

The NFR was originally scheduled to be held in Las Vegas at the Thomas & Mack Center, but according to a PRCA press release the venue was “not available for live entertainment with fans this year due to coronavirus restrictions in Nevada.”

Count Tryan as among the cowboys thankful there will be a NFR competition this year.

According to a tweet by the PBR's Justin Felisko, bull rider will have hip surgery.

A tweet by Justin Felisko of the PBR says the Volborg cowboy will return for the World Finals Nov. 12-15 in Texas.

Montana's Jess Lockwood misses event due to injury but is projected to compete at the upcoming World Finals.

PBR elite series event will mark 26th straight year with a performance in the Magic City.

Clay Tryan, pictured at the Wrangler Team Roping Championships Finals at First Interstate Arena at MetraPark on Monday, will be competing at his 18th National Finals Rodeo in December.

Riders watch the opening ceremony at the Wrangler Team Roping Championships Finals at First Interstate Arena at MetraPark on Monday.