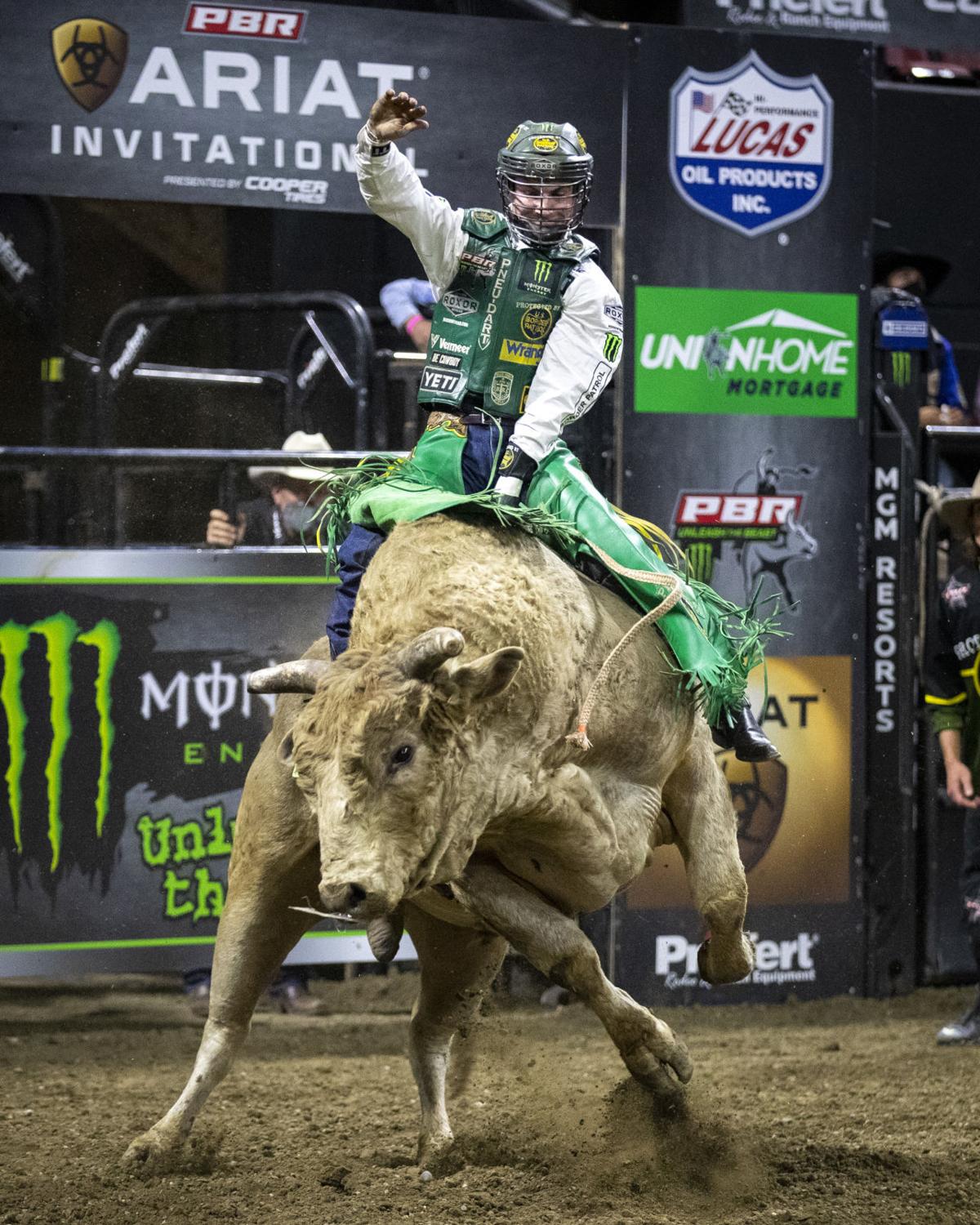 Jess Lockwood rides One for the Money during the PBR Unleash the Beast Ariat Invitational at First Interstate Arena at MetraPark on Friday. Lockwood scored an 84 in his first ride since March 1. 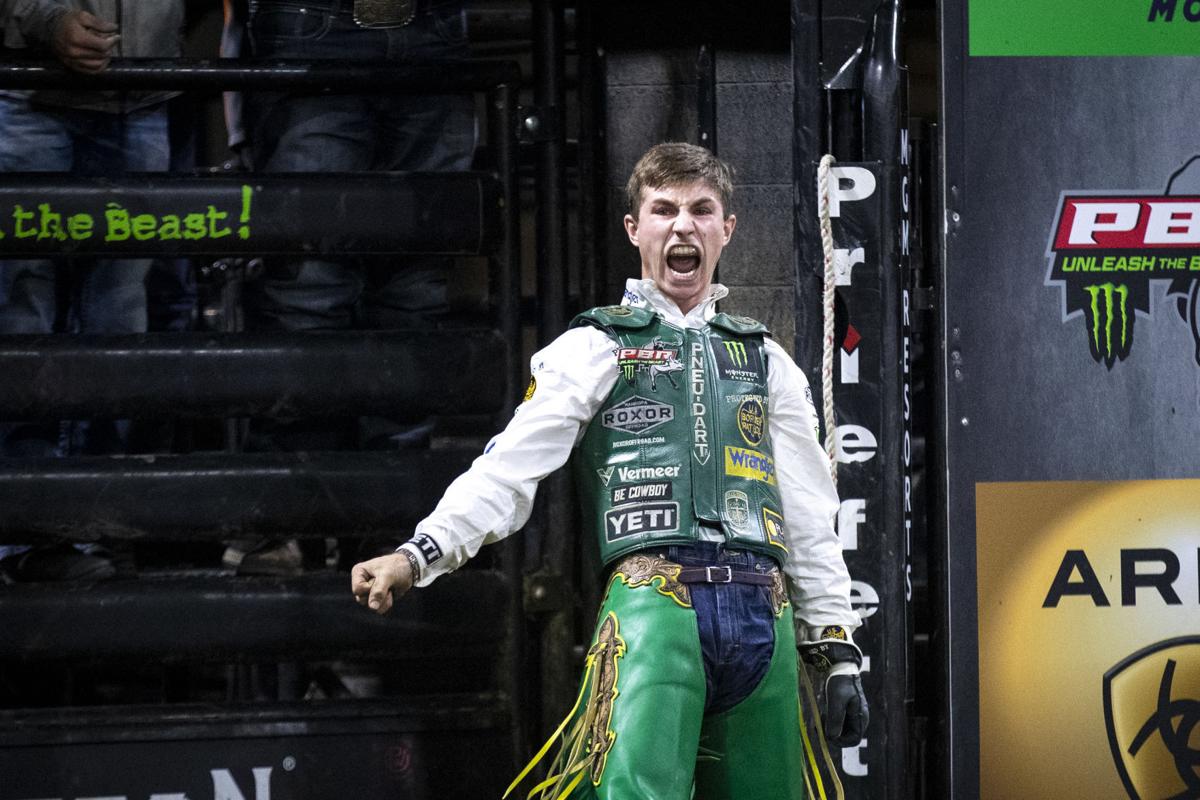 Jess Lockwood reacts after riding One for the Money during the PBR Unleash the Beast Ariat Invitational at First Interstate Arena at MetraPark on Friday. The defending world champ scored an 84 in his first ride in over six months.

BILLINGS — It was a triumphant homecoming for Montana darling Jess Lockwood.

Ranked third in the Professional Bull Riders world standings, Lockwood was the third-to-last rider at First Interstate Arena at MetraPark in his first official ride since suffering a serious hamstring injury that required surgery in March.

Making his first appearance since he was cleared to return to action at the arena in which he gained his first elite series win in 2016, Lockwood answered the call.

The defending world champion bucked his way to an 84-point ride aboard One For The Money. The ride was delayed as the bull did not cooperate in the chutes and had to be settled, but once the chute opened, the cheers began and Lockwood ended by celebrating, pointing his fingers up in the air.

The PA announcer let out a roar of, “He’s Back,” and called it a “solid performance.”

Lockwood, also the world titlist in 2017, had a determined look on his face after the ride, but let out a nice smile in his post-ride PBR RidePass in-arena interview played over the big screen at the arena, and, answering a question said, “If I can catch my breath. I’m not in shape for bull riding yet.”

He sure looked the part and the crowd appreciated the champion’s effort, and Lockwood acknowledged it, ending the interview with, “I appreciate all you guys.”

Overall, 15 bull riders recorded scores while 21 did not. World standings leader Jose Vitor Leme is in second with an 89.25-point score.

Lockwood wasn’t the only home-state bull rider to thrill the fans at the Ariat Invitational, which continues Saturday with a 6:45 p.m. performance. Championship Sunday is scheduled for a 1:45 p.m. start.

After the first round, Keyshawn Whitehorse is in first place with 89.5 points. Andrew Alvidrez is third with 88.5. Browning’s Dakota Louis is fourth with 86.5.

Overall 1,376 fans were at the event, sitting in pod seating in a social distancing effort due to the coronavirus pandemic. It is the 25th consecutive year of the Billings event, which routinely draws large crowds.

Lucas Divino and Cooper Davis were tied for fifth with both having turned in 85.75-point rides. Jake Lockwood received an entry as an alternate. Jake Lockwood, the younger brother of Jess, is in seventh place after an 85.25-point ride.

“To get a ride anywhere you are excited,” Jake Lockwood said during his RidePass interview. “I couldn’t be any more excited to do it in the home state.”

Jake Lockwood entered the event ranked 41st in the world. The top 35 qualify for the PBR World Finals, which are scheduled for Nov. 4-8 in Las Vegas.

“That’s what we are all shooting for and want to do it at the top level and be in the top 35,” Jake Lockwood said over the PA during the interview.

Louis told The Billings Gazette and 406mtsports.com in an interview prior to the event that he was really looking forward to competing in his home state in front of the Montana fans and his grandma, Nathel Show of Billings.

Louis is tied for 38th in the rankings and it is also a goal of his to be competing at the finale in Las Vegas.

Like the two Lockwood brothers, the fans at Metra gave Louis a nice ovation.

“There is no comparison to the Montana fans. I love this place,” Louis said in his RidePass interview.

As he told The Gazette and 406mtsports.com, the road to the World Finals will be conquered bull by bull.

“Keep staying on my bulls one at a time and let the good times roll,” Louis said in the interview shown to the fans on the big screen above the chutes of the key to qualifying for his first championships.

J.B. Mauney, who won the Billings event in 2007 and 2017, tied with Kaique Pacheco for eighth place with a score of 85. Mauney, who is ranked 98th, missed a significant portion of the season with a right shoulder injury.

“About time I stayed on,” Mauney, one of the crowd favorites, said.

Bull rider Dener Barbosa was injured, and as the arena fell into silence was attended to by medical personnel at approximately 9:38 p.m. He left the arena on a stretcher and the fans gave him an encouraging applause.

According to a tweet by the PBR’s Justin Felisko, Barbosa suffered a concussion and a broken jaw and was transported to a local hospital for further evaluation.

The first-day results are as follows:

A weekend he'll never forget — 'Each ride is one you remember — it is bull riding,' says Browning cowboy

The PBR was in Billings on Saturday for Day 2 of the Ariat Invitational. The event concludes Sunday.

Year-end champions will be recognized at an awards banquet in Billings.

A weekend he'll never forget — 'Each ride is one you remember — it is bull riding,' says Browning cowboy

Check out how the Ram National Circuit Finals turned out.

The PBR will stop at First Interstate Arena at MetraPark Friday through Sunday.

Jess Lockwood rides One for the Money during the PBR Unleash the Beast Ariat Invitational at First Interstate Arena at MetraPark on Friday. Lockwood scored an 84 in his first ride since March 1.

Jess Lockwood reacts after riding One for the Money during the PBR Unleash the Beast Ariat Invitational at First Interstate Arena at MetraPark on Friday. The defending world champ scored an 84 in his first ride in over six months.