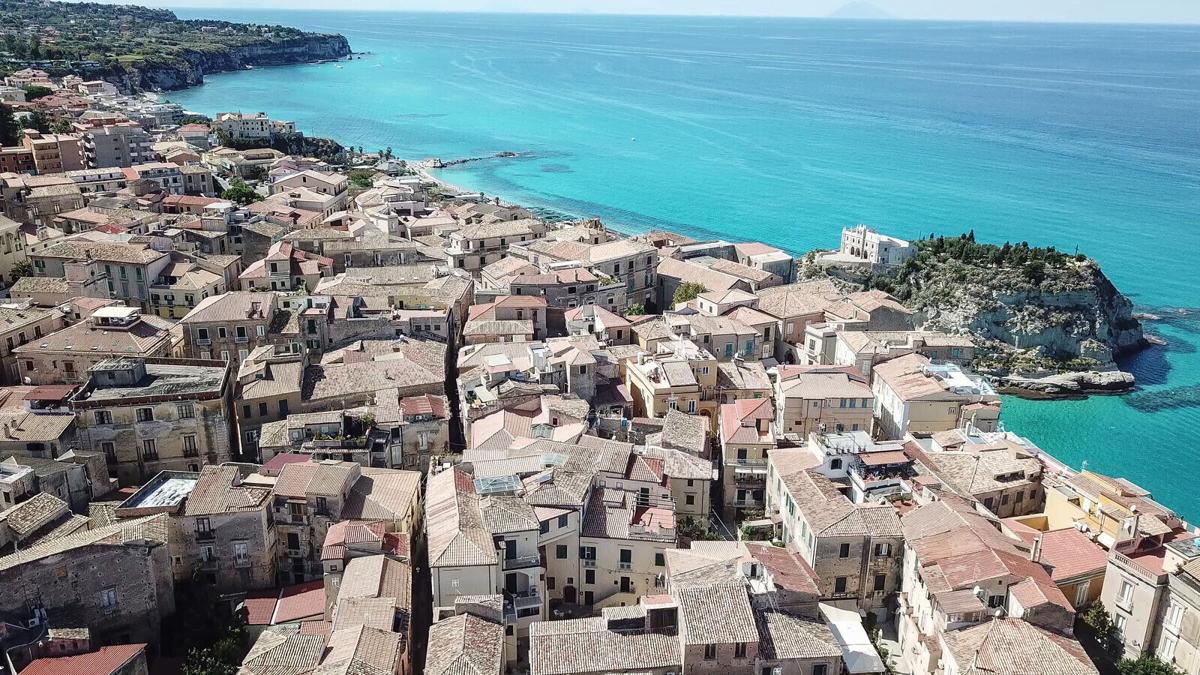 Tropea is nicknamed the "pearl of the Tyrrhenian Sea". 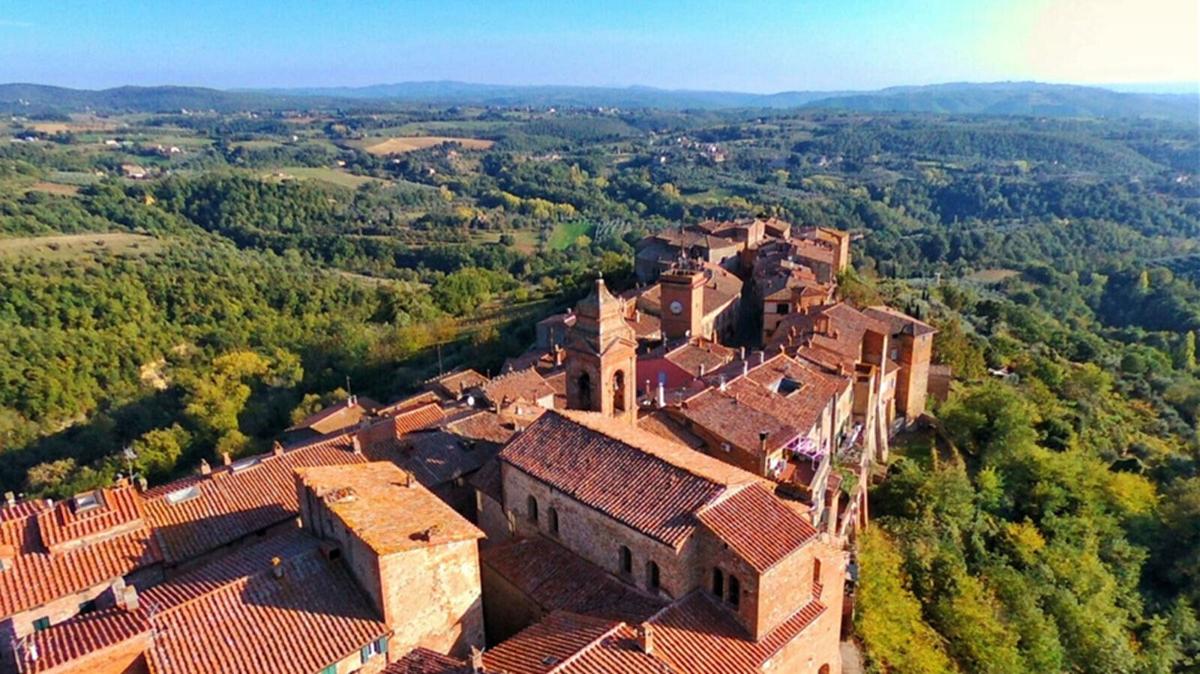 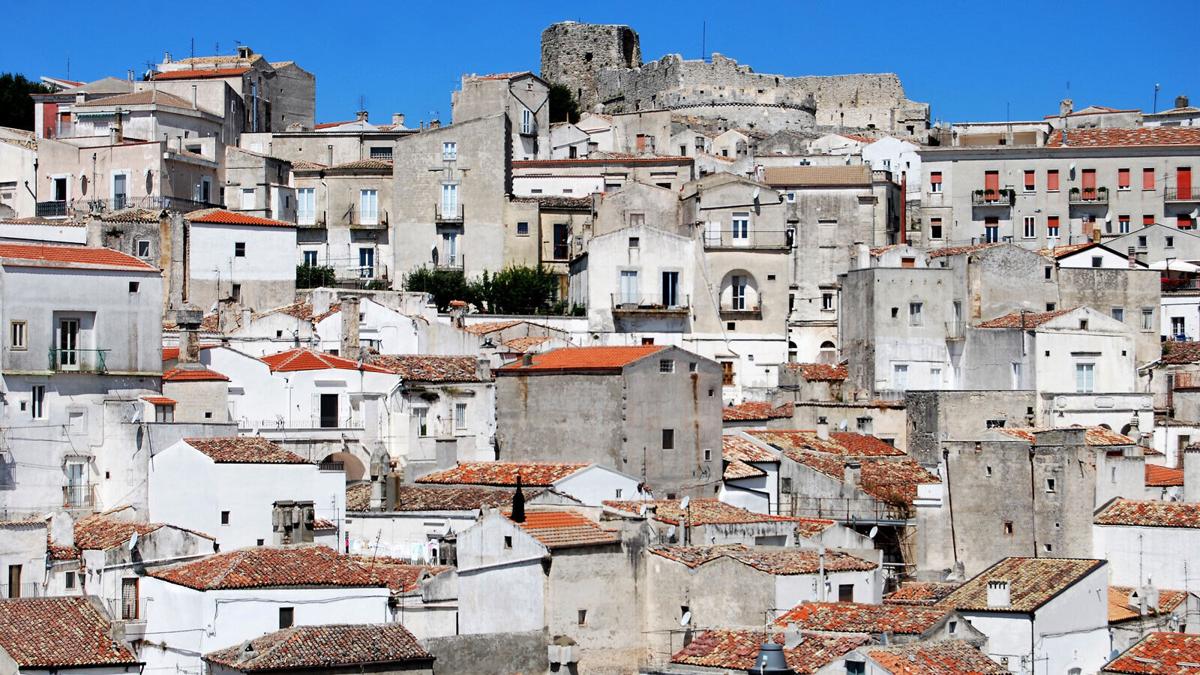 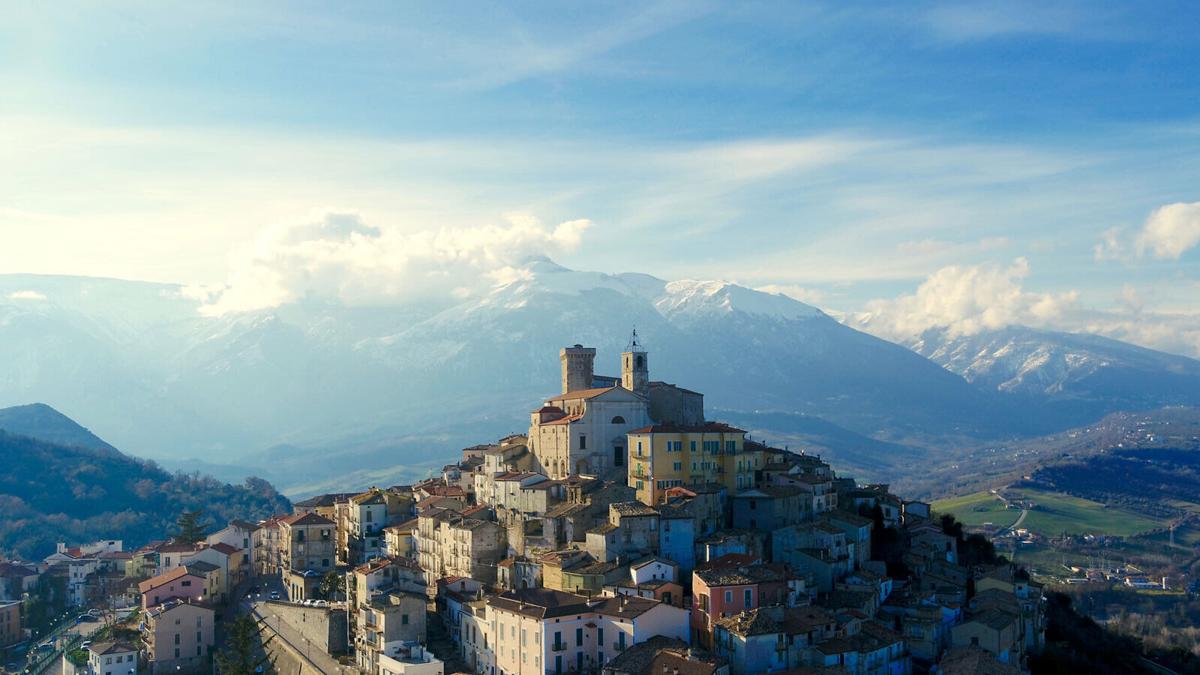 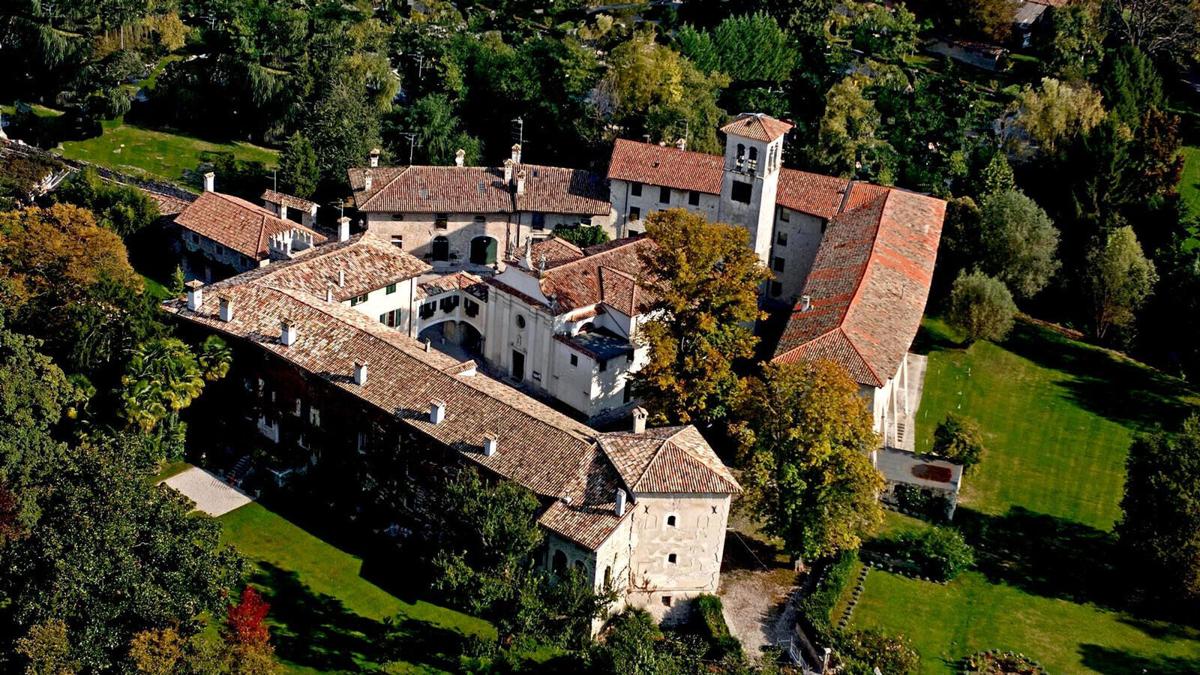 As one of the nation's worst hit by the pandemic, Italy went from being a tourist hotspot to a no-go zone within the space of weeks earlier this year.

It's impossible to predict how the European destination will fare in the coming months — daily infection numbers remain high but COVID-19 appears to have had at least one positive effect on its struggling tourism industry.

As social distancing becomes the norm across much of the world, Italy's under-the-radar destinations are receiving a huge boost.

Offbeat spots that offer spellbinding natural scenery, impressive historical and artistic heritage and traditional food with zero crowds have become even more alluring, and their growing popularity is helping to rescue some of the country's depopulated villages.

"This summer the virus and related travel restrictions have pushed many Italians to discover and appreciate places near home, in their so-called 'backyard,' which they never would have seen otherwise", Fiorello Primi, president of I Borghi Più Belli d'Italia, an elite club devised to promote and unite some of Italy's most beautiful small villages and towns, tells CNN.

According to Primi, it's the fascination of discovering the "hidden, unknown and authentic slow-pace Italy" that's pulling visitors in.

"People want a beautiful, safe and peaceful place that holds everything within a small space; they don't want to be scared of contagion risks and want to be able to take in all the plus points a borgo has to offer, to fully experience it."

The club's recent data indicates that tourist flows have jumped up 70% in all of its villages during the last year, despite the significant fall in visitors to the country.

Primi is now focusing efforts on smart working and so-called "job tourist" projects in order to lure digital nomads. By June 2021, all of its villages will have a high-speed internet connection.

They're also investing into creating special "working labs" for foreign professionals that are equipped with computers, printers and conference rooms.

"If a Swedish or American manager wants to come and experience life in one of our towns for a long stay of several months and keep working remotely, there will be full assistance", adds Primi.

While ever-changing travel restrictions suggest it might be a while before this is a reality, those interested in visiting can still book tailored-week tours of the villages through the club's tour operator.

Villages and towns have to meet various standards to qualify for I Borghi più belli d'Italia membership, such as holding historic buildings that are in good condition and have an architectural or natural heritage certified by institutions.

They must also offer good services to visitors, as well as a variety of tourist activities, alongside other "intangible" cultural aspects.

"The idea is that if locals lead a pleasant lifestyle then also visitors will have a good time and feel at home," says Primi.

This year six new "entries" were selected to join the club, which now has 315 villages and towns as members.

Here are 10 of the newest additions to Italy's coveted most beautiful small villages club, which just happen to be perfect for social distancing.

Located close to Rome in the region of Umbria, this tiny hilltop village offers one of the most stunning panoramas of central Italy across the ragged Apennine mountain range.

Surrounded by wild forests and streams, Monteleone di Orvieto is nicknamed "the red island rising from a green sea" thanks to the distinctive bright red artisan bricks found on many of its buildings.

The village was originally born from a lookout castle built to protect the nearby Orvieto town from attack back in the days when Italy was divided into bickering communes.

While the castle is no longer intact, remains of its fortified walls and towers can still be found.

With a landscape dotted with olive groves, fruit orchards and cereal plantations, as well as an ancient belvedere with panoramic view of the region, the quaint village is undoubtedly one of the prettiest under the radar spots in the country.

Situated on the southern slopes of Monte Gargano, Monte Sant'Angelo is one of Puglia's famous "white citadels," named for their picturesque white houses and buildings.

The secluded village holds two UNESCO-listed World Heritage sites Foresta Umbra, an ancient beech forest that's believed to be enchanted and the sanctuary of San Michele Arcangelo, one of a group of seven significant monuments in Italy highlighting the achievements of Germanic tribe the Lombards (or the Longobards).

The latter, a shrine to the Archangel Michael, is a complex of buildings, including a church, built around a mystical cave.

Aside from its magnificent historical sites, the hilltop town offers fantastic views of Gargano and holds various traditional festivals where visitors can try some of Puglia's best gourmet food such as homemade orecchiette pasta with turnips and "host biscuits," which are filled with toasted almonds.

Casoli may be one of Abruzzo's lesser-known places, but the medieval village is also one of its most intriguing thanks to the many beautiful wall murals that cover its buildings.

Surrounded by vineyards and olive groves, the medieval village is a maze of alleys filled with ornate palazzos and colorful dwellings, that unwind all the way up to the overhanging Castello Ducale, built by the Normans in the 11th century.

Based 1,240 feet above sea level, Casoli overlooks a patchwork of forests, canyons, lakes and rivers, providing remarkable views that stretch from the wild Majella mountains, to the fisherman huts of the Trabocchi coast on the Adriatic shore.

The town offers a number of specialty foods such as a short, knotted pasta called cazziarelli and mela piana (flat apple) that's been around since ancient times.

There's also entertainment in the form of artisan fairs and the annual Festival of Santa Reparata and San Gilberto, held in honor of two of Casoli's patron saints.

Based near the city of Viterbo in central Italy, Bassano in Teverina is perched on a rock overlooking a section of the Tiber Valley.

Considered the heart of the wild Tuscia, the ancient Etruscan village's dark and troubling past has long been a source of fascination for visitors.

According to legend, the Tiber's clear waters turned red with blood when the Etruscans were defeated by Imperial Rome and the town was also rocked by violent feuds between local families in the 1800s.

Then during World War II, a German train loaded with ammunition exploded close by, destroying many homes and buildings and it lay almost deserted for decades.

One of its most noted landmarks is the Clock Tower, which was built to fortify the bell tower of the nearby church of Santa Maria dei Lumi. However, this was not discovered until it was restyled in the 1970's.

Nearby highlights include architect Pirro Ligorio's Park of the Monsters, which consists of monsters and mythological creatures made from stone, and the ghost town of Chia Vecchia.

Visitors can also try some of Bassano in Teverina's top delicacies, such as wild boar fettuccine and porcini mushroom soup.

Based in the Italian region of Emilia-Romagna, Montechiarugolo produces much of the milk used to make Parmigiano Reggiano cheese.

The charming town, which sits along the famous Ham and Colli Wines Route, is largely dominated by its 15th century Renaissance castle.

Owned by an aristocrat family who rent it out for private events, Montechiarugolo castle straddles the border between the cities of Parma and Reggio Emilia, and still has its fortified walls intact, as well as the ruins of a drawbridge.

The fortress is rumored to be haunted by the ghost of a young witch who escaped her torturers and found shelter there.

Its interior is decorated with beautiful frescoes, while picturesque gardens adorned with statues lie just inside its high walls.

Back in the 1700s, the town's villagers were among the first in Italy to trigger secessionist battles against invading troops and it's rumored that Italy's green-white-red national flag was born here.

Legend has it that Tropea was founded by mythological hero Hercules.

Popular for its healthy red onions, the small town on the coast of Calabria is nicknamed the "pearl of the Tyrrhenian Sea."

A UNESCO-listed World Heritage Site, it's located along the mythological "Coast of the Gods," famous for its stunning white granite cliffs, secluded inlets, shimmering blue waters and idyllic beaches.

Filled with vibrant alleys and palazzos, the picturesque church of Santa Maria dell`Isola, which rises on a protruding, turtle-shaped sea crag that looms over a popular beach, is the town's official symbol.

Positioned around 70 kilometers northwest of Rome, Vitorchiano sits on a reddish hilltop jutting-out of a deep gorge that resembles a giant mushroom.

Dating back to Etruscan times, the town is an optical illusion from a distance, as its simple dwellings are carved into the very hill they sit on, making it difficult to see where the rock ends and they begin.

Below the rock, lush green undergrowth rises all the way up to the yellow roofs and pointed chimneys of the local homes.

There are various clefts and caves within the foundation that are thought to have been used as bandit lairs during the Middle Ages.

As for food, the town's signature dish is a spicy spaghetti made from cavatelli pasta with chili pepper, garlic, tomato sauce and wild fennel.

Both are surrounded by lush parks filled with exotic flowers, wild birds and streams that flow into the nearby lakes and forests.

The town wonderfully preserved center looks likes its been frozen in time, with cobblestone paths leading to fortified panoramic walls.

Constructed in the 1600s and filled with magnolia trees, the impressive Villa Vitas winery provides wine tasting sessions featuring an array of wines produced in the estate.

Considered the "pearl of the Valdichiana valley," Lucignano looks like a curled-up snake or a long sausage from above.

The town's well-preserved architecture offers a glimpse into the medieval world its oval circle of wall is still intact.

The impressive Castello di Lucignano is another highlight, along with the sanctuary of the Madonna della Querce, where mothers unable to produce breast milk are said to have flocked in order to drink from its "miraculous" well.

Visitors can also check out the town's delightful flower, artisan and peasant fairs, while meat lovers have the option of trying out Tuscan Chianina beef steaks.

This small hilltop town in the region of Marche hides a network of underground tunnels that are waiting to be explored.

The second is its wine Morro d'Alba's Verdicchio and Lacrima varieties were famously favored by emperor Frederick II in the 1200s.

Visitors can sample these wines and many others at the town's regular wine and truffle tasting evenings.

How the COVID era has inspired travel for 2021

With 2020 vacation budgets mostly untouched, some people now have extra money to spend.

Tropea is nicknamed the "pearl of the Tyrrhenian Sea".