The majority of Americans typically don’t use all their paid time off. That’s been a worrying trend in past years that could lead to potential burnout or resentment as employees don’t take full advantage of compensation they’re entitled to.

But in a year where people traveled significantly less than they used to, millennials are actually taking more time off for the 2020 holidays than they did in past years.

This December, 50% of millennials say they plan on taking more time off from work than previous years. And these days, it's mainly to de-stress from 2020. That’s according to data collected as part of the December 2020 Amex Trendex report, which in November 2020 polled 2,000 U.S. adults who traveled by air at least once in 2019 and have an annual household income of at least $70,000.

That demographic includes people like Jeff McNeal, a self-described "prototypical millennial side hustler" who works full-time as a project manager for a commercial roofing company and runs a small business selling crickets online. It’s been a year of ups and downs for Pennsylvania-based McNeal, who said business at his roofing company tanked early in the pandemic when most business came to a standstill. But regular roof work still needs to get done, which led to twice the usual work in the second half of the year.

"In mid-July, people started asking for site visits," McNeal says. "I was finally getting work, which was great. But then next thing I know, I’m getting too much business. Now, I’m like, how am I going to get this all scheduled? We were working weekends, second shifts and oddball hours. But we had to because we were trying to make up for a lost quarter of revenue."

His cricket business has had equal ups and downs. All that, plus 35-year-old McNeal is a dad of three kids under the age of nine.

"During the last two weeks of December, all I’m doing is lounging around my house in my sweatpants," he says. "I’ll do some occasional chores, but aside from that, I plan on sleeping in and getting caught up with TV shows I've missed out on and books I haven't had a chance to read."

When Teena Merlan takes a staycation, it’s typically one day off at a time for self-care, like a trip to the spa. This December, spas are closed where she lives in California due to COVID-19 restrictions. Instead, she’s taking time off from her job working in product management at a startup to stay at home. She has no plans of how she’ll spend the time, aside from putting the finishing touches on a book about minimalism that she’s set to publish soon.

"This year has been so difficult," Merlan says. "What wasn’t stressful about 2020? The election. Civil unrest. Pandemic. Family issues. My husband’s company had layoffs. Any one of those things is difficult on its own, but with everything piled on top of everything else, it’s just a heavy burden."

"I want to take advantage of being able to take time off and still get paid for it," she says. "I just really need to unwind."

Staycations at a hotel, 15-minutes away

Corritta Lewis was one of the millions of Americans who lost her job during the pandemic. With no job, Lewis packed up her family and moved to Mexico — a big reason being that she said she could reduce her cost of living by 75%.

While Mexico has been a positive for Lewis and her family, it’s also brought its own challenges: She’s already gone through two hurricanes in the four months since living there, and she’s learning to adapt to cultural differences, like the fact that her new home has no oven (something common to Mexican homes).

Since moving to Mexico, she’s found a California-based job that allows her to work remotely. While she’s relieved to have a job, she’s now navigating working at a new company, living in a new country and raising a two-year-old.

Lewis, who runs a travel blog on the side, will still be "traveling" in a sense this December, but there’s no airplane — or even a car — involved. Lewis, her wife and son will spend the holidays at an all-inclusive resort located just a 15-minute walk from their home.

Lewis doesn’t usually stay at all-inclusive hotels, and she describes herself as "kind of cheap." But with no need to cook or clean, plus free babysitting services at the resort, Lewis decided it was worth it to end 2020 on a more relaxing note.

Still, she wonders if taking time off so quickly after starting a new job is the right thing to do.

"There’s a little bit of guilt there, even with the full disclosure to my company that this was planned ahead of time," she says. "But especially this year, we’ve learned how important it is to spend time with family."

Millennials are catching up to older generations

It’s not that people don’t take days off because they don’t have paid time off available. On average, employees earned 23.9 days of PTO in 2018, according to 2019 research from the U.S. Travel Association, Oxford Economics and Ipsos. But those days aren’t being used, and U.S. workers are actually using a lesser share of their days off — 27.2% of PTO went unused in 2018, up from 25.9% in 2017. 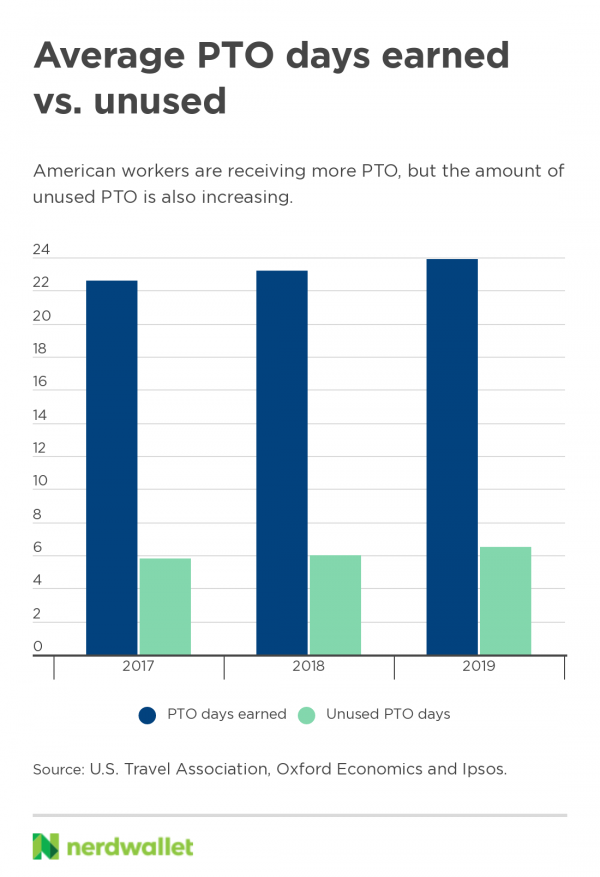 Still, the bulk of vacation days that are used are being taken by older workers. Only 21% of millennials took 10 to 19 days off in 2018 versus 35% of baby boomers. So, in some ways, millennials are simply catching up to older generations in terms of taking time off. 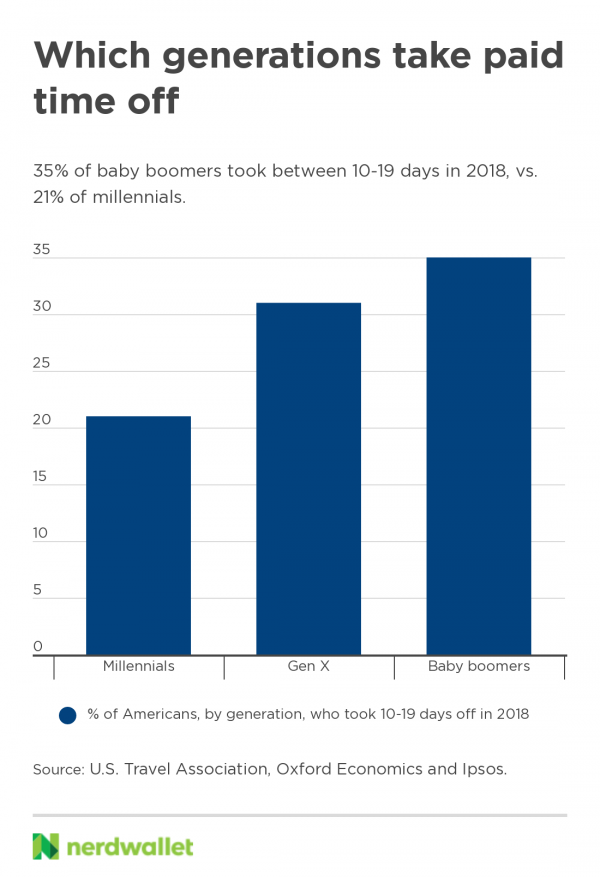 But the trend of taking time off of work specifically to de-stress in December is largely unique to millennials. While 50% of millennials said they’d be taking more time off work this December than in previous years to de-stress from 2020, just 31% of all adults surveyed said the same.

Consider it one more thing to add to the list of positive trends to come out of 2020, like waived airline change fees, improved hotel cancellation policies and better airplane sanitization. And perhaps more encouraging — those same millennials are already planning travel for the 2021 holiday season.

"I’m excited for my staycation because I can lounge around, but this won’t be permanent," McNeal says. "I want to get out again."

For Lewis, that means achieving a goal to hit every Legoland theme park in the world. They visited Legoland California during the 2019 holiday season and managed to get to Legoland Florida during the pandemic. Next year, she hopes it’s safe to travel beyond North America, as she’s got her eyes on the theme parks in Japan and Denmark.

"We want to travel around the world," Lewis says. "Our destinations may change slightly, but we are absolutely going to do it."

Curacao has reopened the country’s borders to American travelers from every U.S. state and waived the previously required 14-day visitor quarantine, government officials said this week. Curacao had previously limited inbound travel to residents of the New York tri-state area and Florida upon the launch of its phased reopening in October. The Curacao Tourist Board; the Ministry of Public ...

International Travel Just Got More Complicated. Here’s What You Need to Know.

The Centers for Disease Control has announced a new requirement for all air passengers entering the United States. Beginning January 26, all travelers will need a proof of a negative Covid-19 test result in order to arrive in the country. Yes, that includes U.S. citizens returning home from abroad. Travelers have been navigating confusing waters […]

After months of crunching and recrunching data as the pandemic upended travel, NerdWallet has released its best travel rewards rankings for 2021. And, although travel in 2021 will be different…

ORLANDO, Fla. — Young astronauts and aspiring space explorers now have a new forum to discover planets and delve into galaxies at Planet Play, the latest addition to Kennedy Space Center Visitor Complex. Immersion and interactivity are key for the new play area, which is geared toward visitors ages 2-12. “It’s at least 70 percent physical here ... You can climb, you can use digital ...

Ask a Points Nerd: Should I Book Award Travel for 2021?

There’s finally light at the end of the … tunnel? Year? Air cabin aisle, indicating an emergency exit? Although the Centers for Disease Control and Prevention, or CDC, and other…

Planning a trip during a pandemic

Planning a trip during a pandemic

Cruise industry on pause until February 2021

Cruise industry on pause until February 2021